Australia has a rich history with tennis, with it being the host country of one of the four Grand Slam events, with the season-opening Australian Open, held in Melbourne. Other high-profile tennis championships hosted by Australia have included the Sydney International, which was replaced by the ATP Cup in January 2020. This new event saw the return of team-based competition, which hadn’t been seen since 2012 and the end of the ATP World Team Cup.

Tennis, therefore, has become a popular sport to practice in Australia, with it consistently ranking among the top 10 most participated in sports in year-ending polls. It’s with that in mind that several tennis court facilities and clubs are dotted around each of the states to provide Australians with a range of court surfaces to practice their forearm and backhand swings, volleys and serves.

Sydney alone is home to a fair number of tennis courts and clubs, too many to list here, in fact. If you haven’t already checked out your own suburb, then there’s a good chance it will have a tennis club, at least if there is some recreational land lying around. We’ve picked out just a selection of the very best tennis courts and club in Sydney and the surrounding areas.

The Manly Tennis Centre operates within the Manly Lawn Tennis Club through an agreed partnership. The main Club has been a mainstay on the Manly tennis scene since 1883 and remains on the same site to this day. It’s a members club first and foremost and provides all members with a welcoming environment. The Manly Tennis Centre within it offers casual visitors the use of six synthetic grass courts, which also belong to the Club, as well as separate coaching services.

The Club, meanwhile, has its own annual Championships, which all members are permitted to compete in and, just as important is the fully licensed bar serving post-match bevvies. If you’re keen to become a member, you’ll need to prove you can play first, but if you want to take some lessons first to up your game, you can do so. 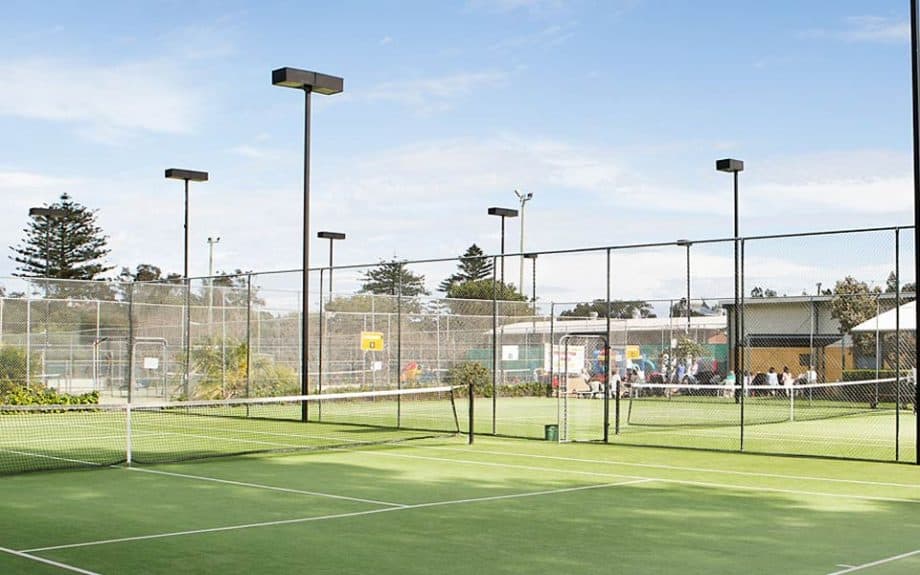 If you want to serve a few balls in the Manly area but don’t want to sign up for club membership, then pay a visit to Keirle Park Tennis Centre. There are six synthetic grass courts available for hire, all of which are floodlit too, for playing when the sun goes down. Of course, you can sign up for membership if you wish, which guarantees you unlimited use of the courts throughout the year, albeit it at certain times only. 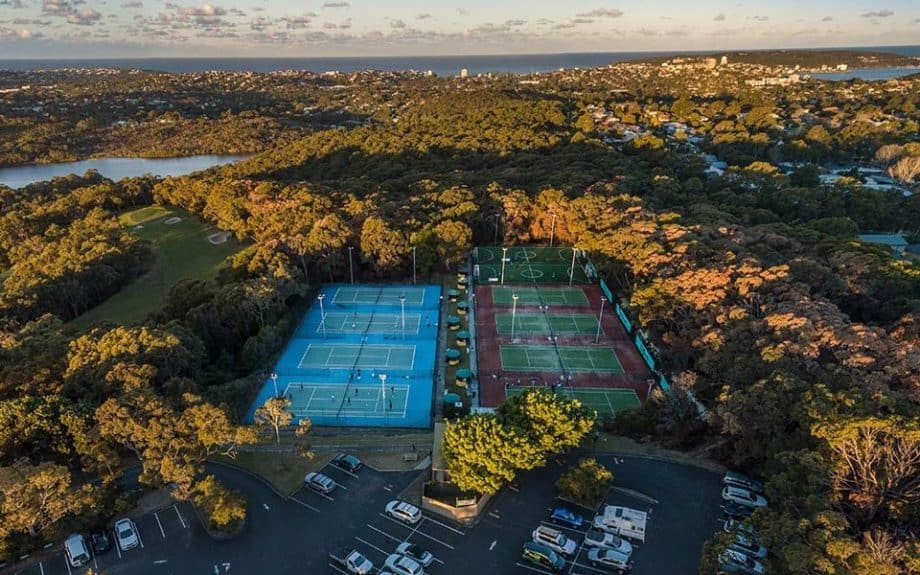 If you want to ditch the grass courts and try your hand at playing on a hard surface, check in to Wakehurst Tennis. The club, situated in the Northern Beaches, boasts four hard courts alongside four synthetic grass courts. And, if you get tired of playing tennis, you can head to the two Futsal courts for some competitive soccer.

Courts can be booked quickly and easily via the website, with 30-minute timeslots available for all. If you’re not quite as good as you thought, Wakehurst Tennis has a number of coaches and former WTA and ATP players on standby to show you the ropes. 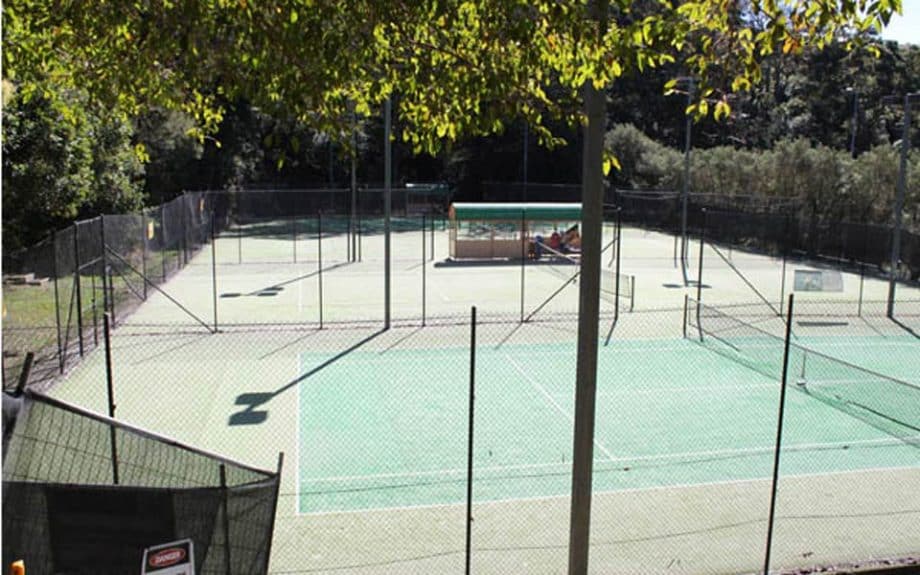 Primrose Park has four floodlit synthetic grass courts that can be hired on an hourly basis. The courts are well-maintained and owing to their position within Primrose Park, are relatively unaffected by windy conditions. Aside from having a casual match with friends, Primrose Park also offers tennis a series of coaching classes for juniors and ladies.

Coaches are all well-qualified and include 1976 Australian Open Singles Champion Mark Edmonson, who won the event when he was ranked 212th. He remains the lowest-ranked winner of a Grand Slam tournament, so will certainly be able to instil the belief that anyone can be a winner. 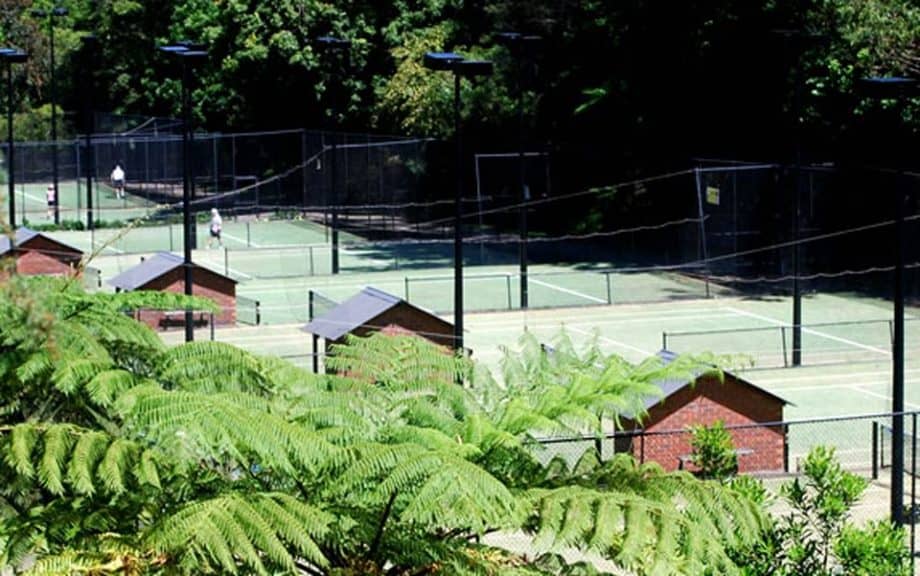 Serving up great views and even greater brews, Cooper Park Tennis is loved by those living in the Eastern Suburbs. Eight full-size synthetic grass tennis courts are available for hire and all are floodlit for after-dark play, while a daytime café will serve you a delicious coffee for some post-tennis refuelling.

Showers are available too and you even have access to a pro-shop for stocking up on new racquets and balls. Courts can be hired from as early as 6am seven days a week, with closing time set at 10pm on weekdays. Coaching staff are also on standby to give you that extra bit of tuition. 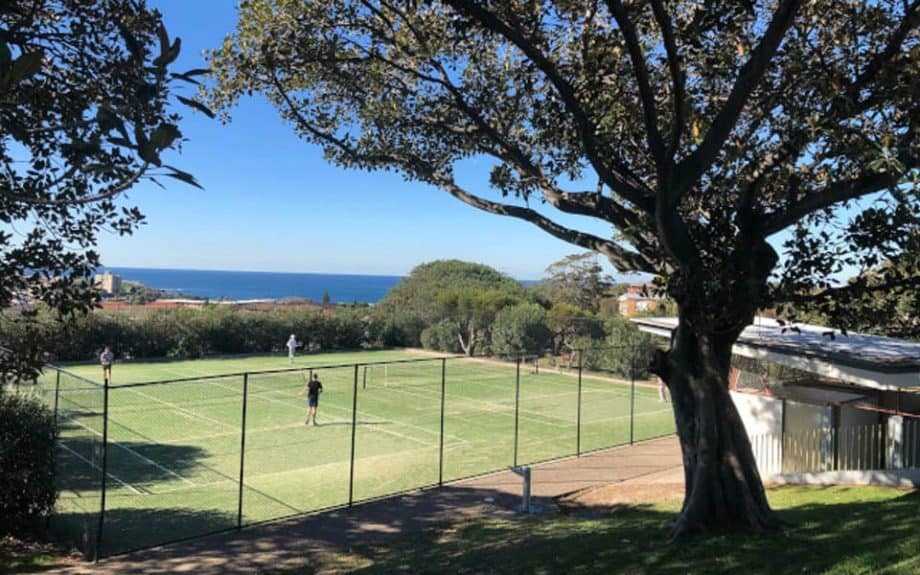 Baker Park’s unique selling point could also be seen as a slight downfall. Courts can be used completely free of charge, although this will inevitably mean there may well be a queue to use them. The centre says courts can only be used for a maximum of one hour, and implores anyone who uses them to respect this rule (but we know how selfish some people can be).

You’re not allowed to provide or receive commercial coaching on the courts either, but if you have a friend who knows what they’re doing, then feel free to play ball. 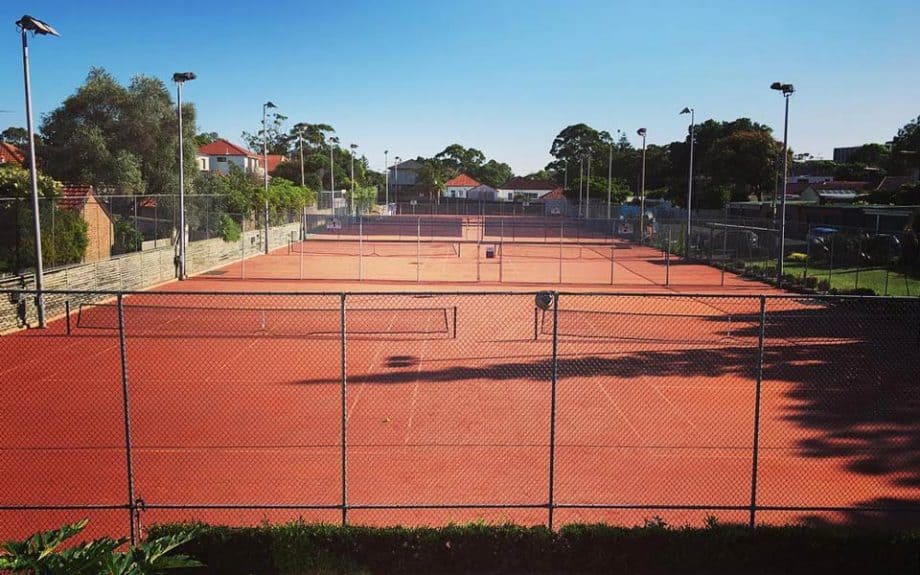 Eastcourts does away with synthetic grass courts in favour of clay and hard-court instead. Those courts are available to hire from 6.45am to 11pm every day, so there should be no issue in finding a time to suit you. Coached classes include cardio tennis, which combines the sport of tennis with a full cardio workout, essentially turning it into a two-in-one gym. If you’d rather some 1-on-1 training instead, Eastcourts also offers private coaching lessons. 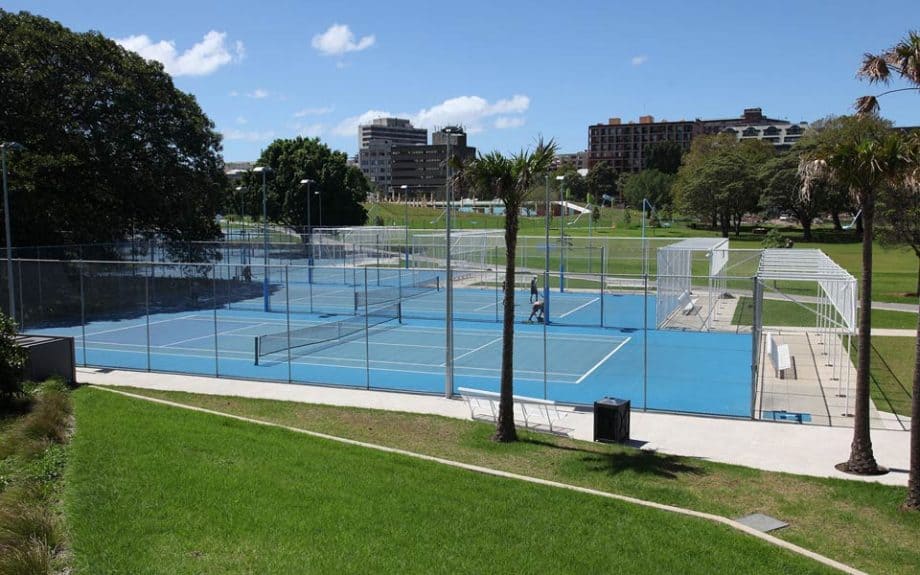 Alexandria Park’s courts are managed by the City Community Tennis group, which also manages courts in Glebe, Beaconsfield, Surry Hills and Rosebery. There are 16 courts in total across the venues, with Alexandria playing host to two hard courts with floodlights. This makes them the perfect venue for playing some tennis when the sun starts to go down, and the site also has a basketball court and a grass oval for playing rugby or soccer.

Courts at all venues are accessible 365 days a year by way of a PIN number that you need to enter to get through the date, although you still need to book a slot to use them. 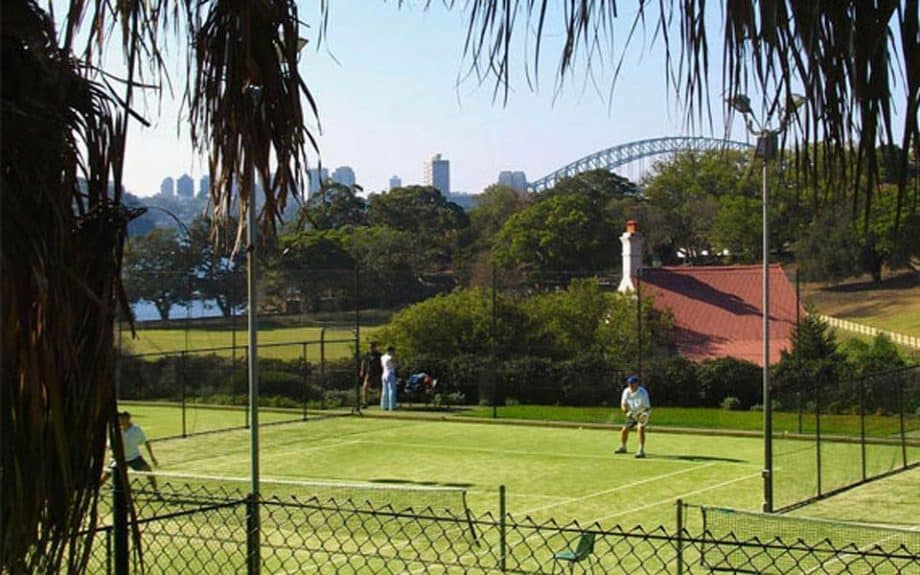 Nestled on the Balmain coastline and overlooking the Parramatta River is Birchgrove Tennis. This tennis centre works predominantly on a permanent booking basis, encouraging players to commit to the routine use of the courts, however, if you’d rather turn up for casual play here and there then you’re free to do so. You don’t even need a friend to play with, as you can hire a ball machine to fire balls at you for you to return. 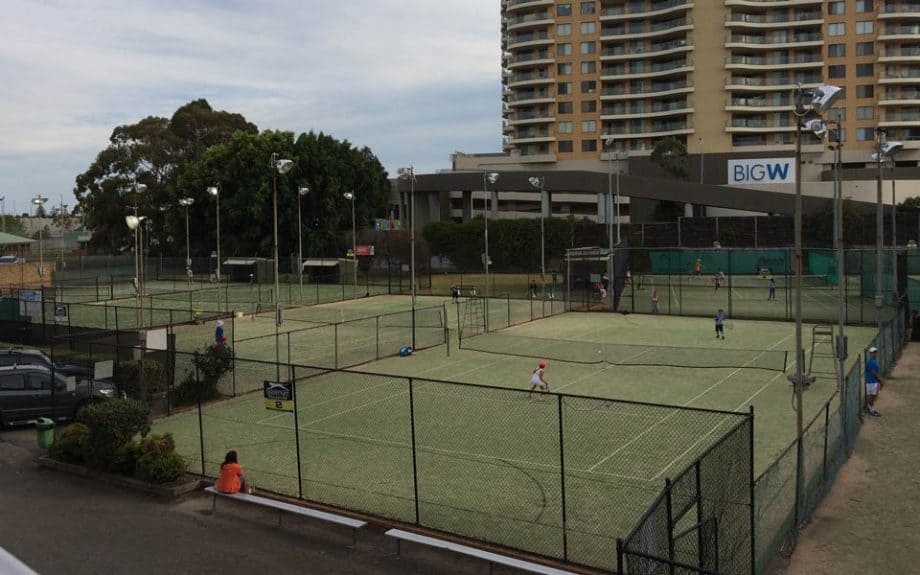 A short drive south of the City is Rockdale Tennis Club, which offers more than just a set of courts to play on. Along with the 18 all-weather tennis courts, Rockdale offers a traditional club environment, including a full restaurant and bar, and a number of screens to watch various sporting events.

Tennis courts are open seven days a week from morning ’til late and lessons, both private and semi-private are available to enrol on too. 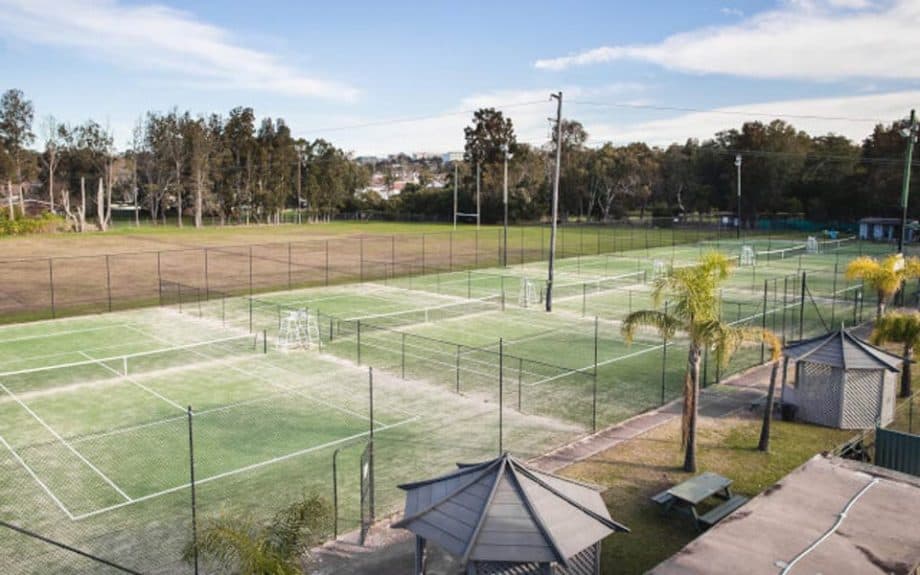 The Sylvania Waters Tennis Centre is owned and operated by a duo who have years of experience in teaching tennis to people of all ages and abilities, with co-owner Ryan being a former Tennis NSW head Sports and Conditioning coach for juniors. Ryan and co-owner Monique have recruited a crack team of tennis coaching specialists to provide new and existing members with a comprehensive selection when it comes to tuition.

Any of the six courts can be hired by the hour, with the last booking being at 10pm, but only for a 30-minute slot.

The Best Sneaker Shops In Sydney