The last time the internet was so obsessed with an orb, it involved Donald Trump possibly summoning the forces of Sauron or swearing allegiance to the Illuminati (or just taking part in an ill-advised photo op).

With its reputation on the line, the orb is back and better than ever in its latest incarnation: the centerpiece of the world’s coolest ode to books, the Tianjin Binhai Library.

Dutch firm MVRDV designed the 368,000 square-foot Chinese library with a curvy, futuristic vibe and an ethereal all-white colour palette. The five-story structure features layers upon layers of terraced shelving in a wave-like pattern, which also act as platforms, stairs, seats, and mini-gathering areas.

At the heart of the building is a glowing spherical auditorium – not at all creepily called “The Eye” – which serves as a hangout spot for visitors who want to settle in with their latest read or simply take in the astonishing view. Seen from the front, the orb forms a pupil that appears to peek out from the building’s facade.

“The Tianjin Binhai Library interior is almost cave-like, a continuous bookshelf,” said MVRDV co-founder Winy Maas. “Not being able to touch the building’s volume we ‘rolled’ the ball shaped auditorium demanded by the brief into the building and the building simply made space for it, as a ‘hug’ between media and knowledge.”

One of any library’s most interesting features is its collection of books, and the Tianjin Binhai Library is no exception. Its topographical shelves hold 1.2 million volumes stretching all the way up to the ceiling, a powerful design statement that begs the question: “How do you get the books up there, anyway?”

Though they were initially intended to be accessible from rooms concealed behind the shelves, the project ran out of time and money, leaving the architects to devise a sly solution. MVRDV replaced the texts on higher shelves with aluminium replicas that are intentionally-unreachable but preserve the aesthetic integrity of the space. The firm says they hope that their “full vision for the library may be realised in the future.” 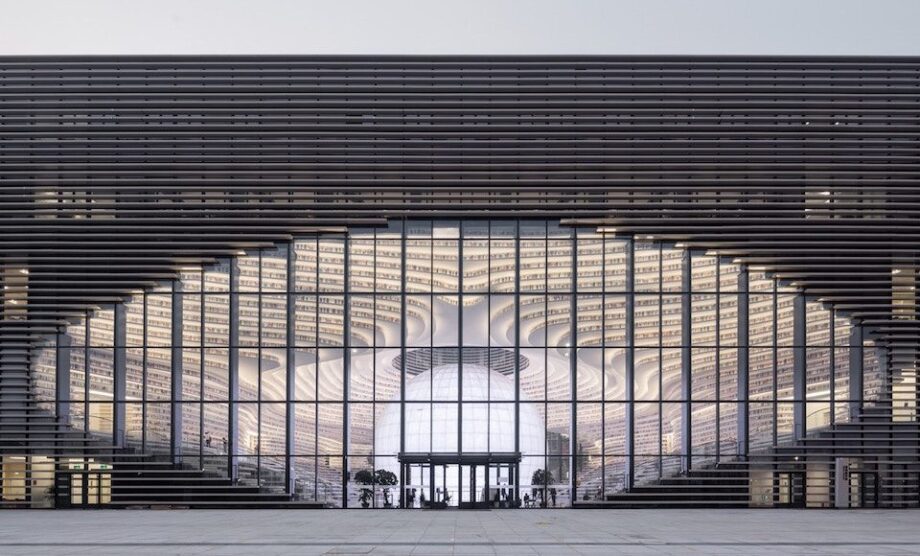 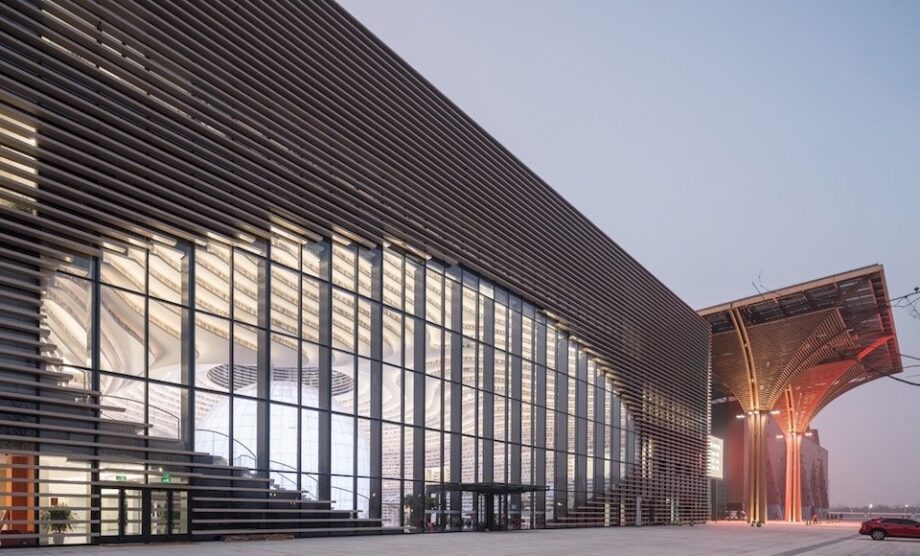 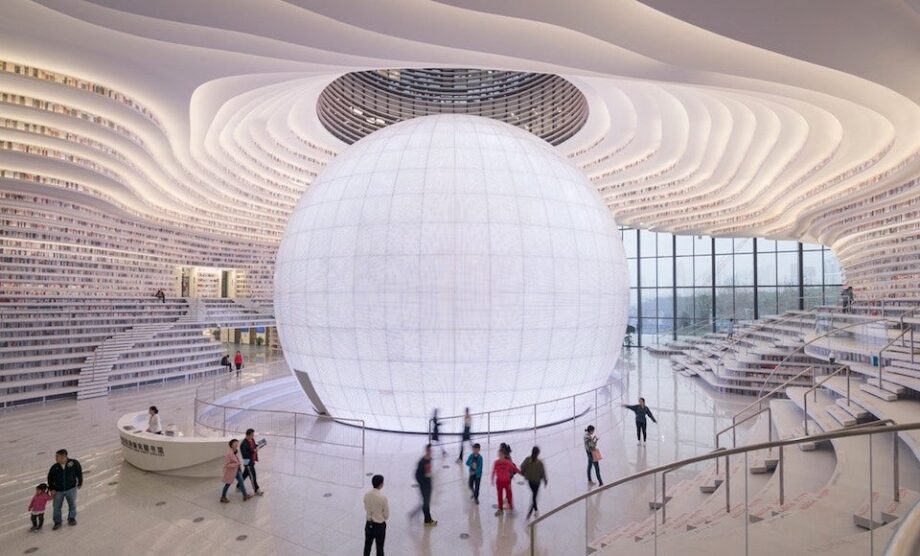 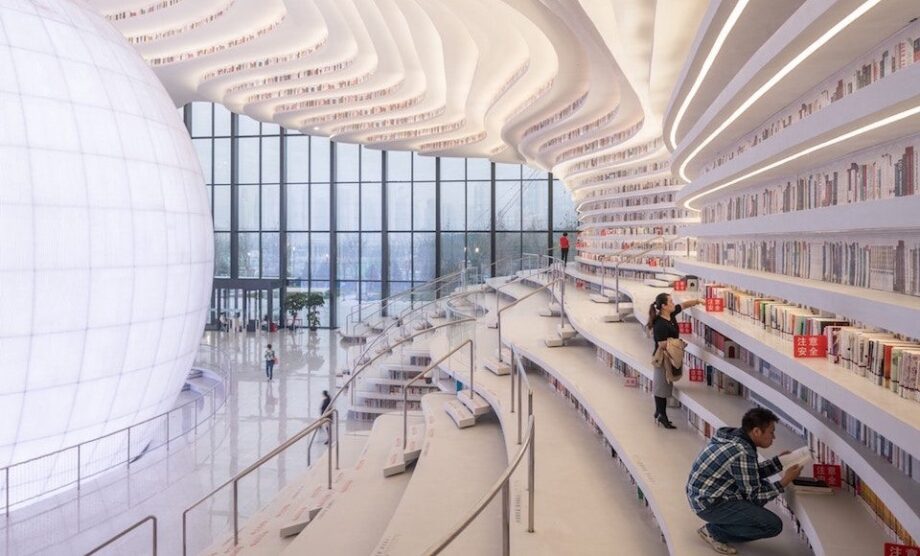 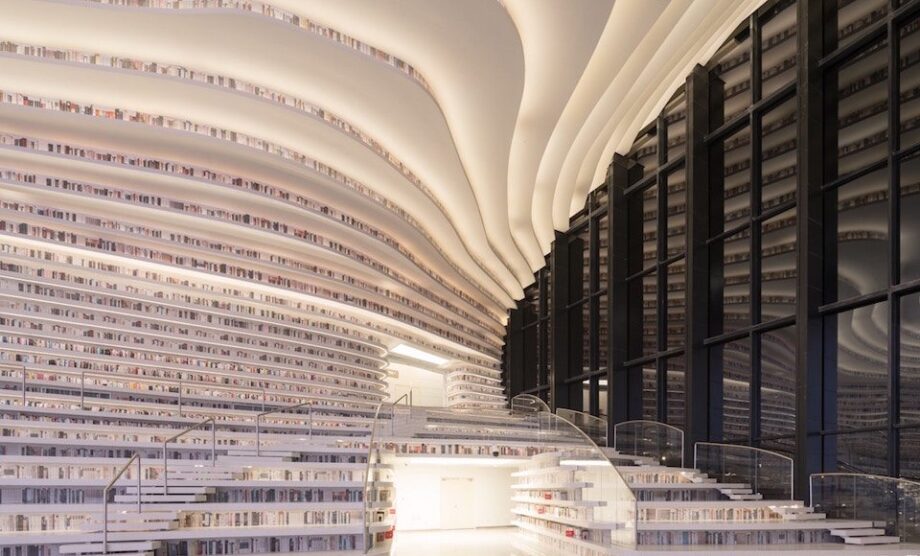 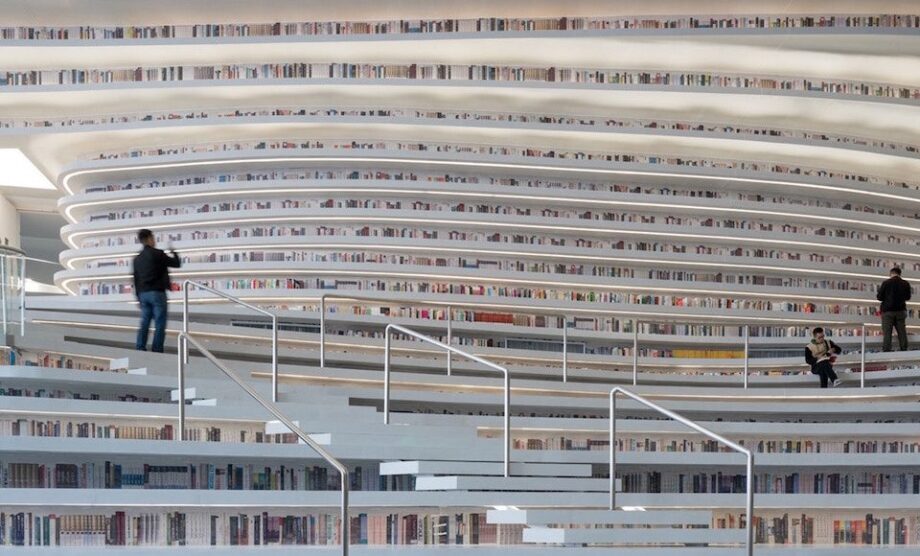 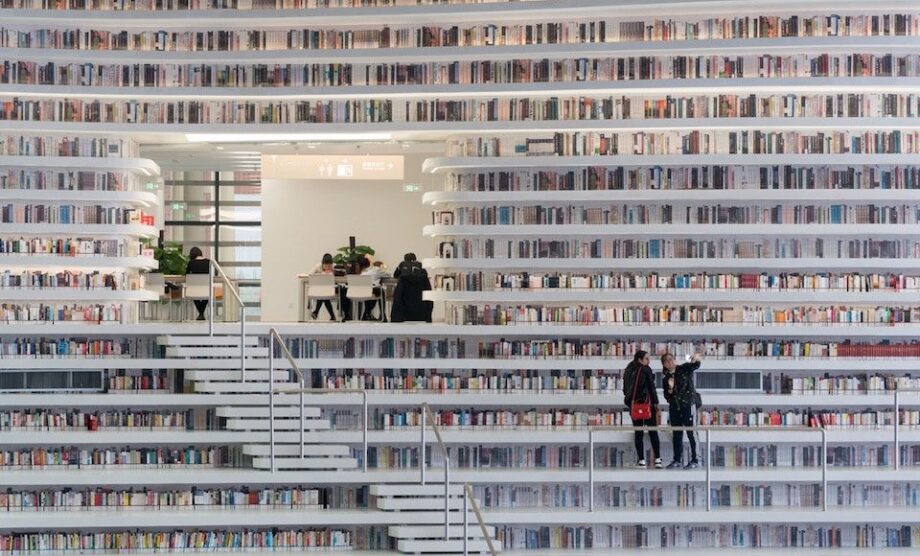 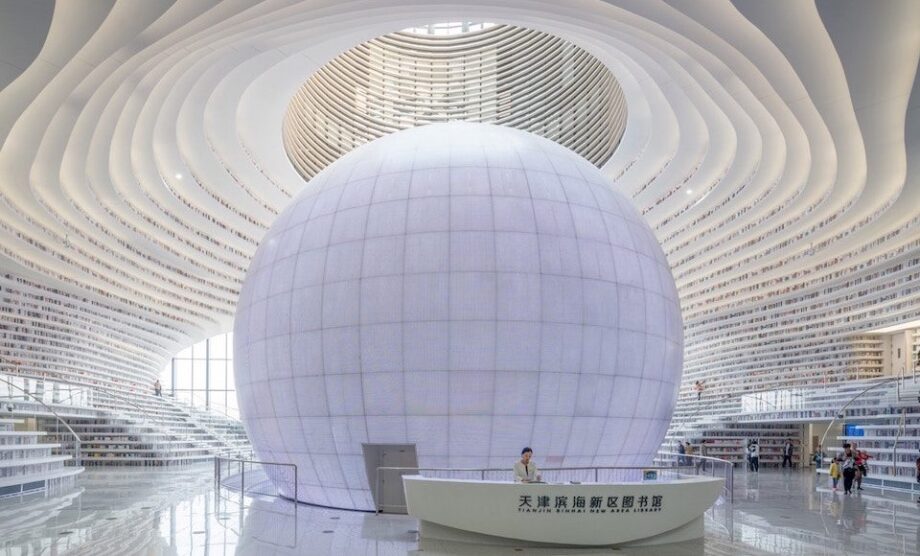 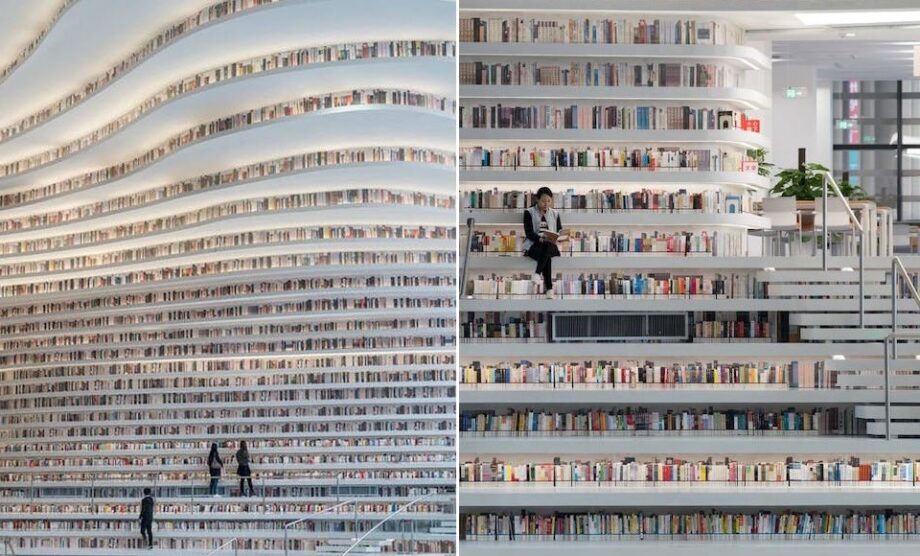 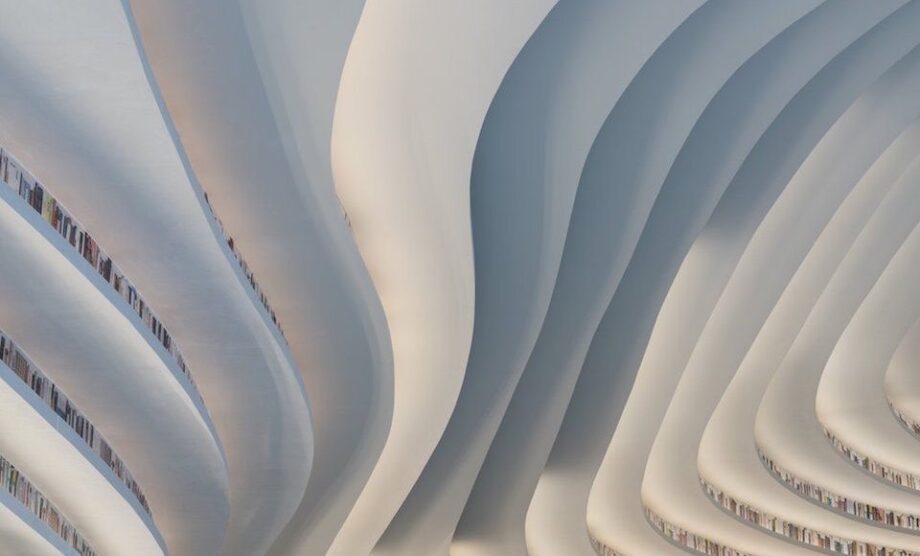 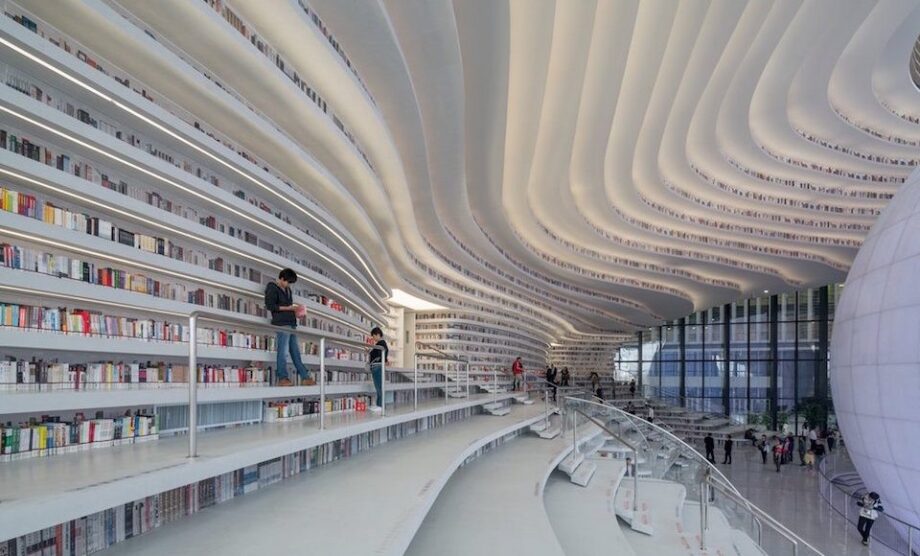 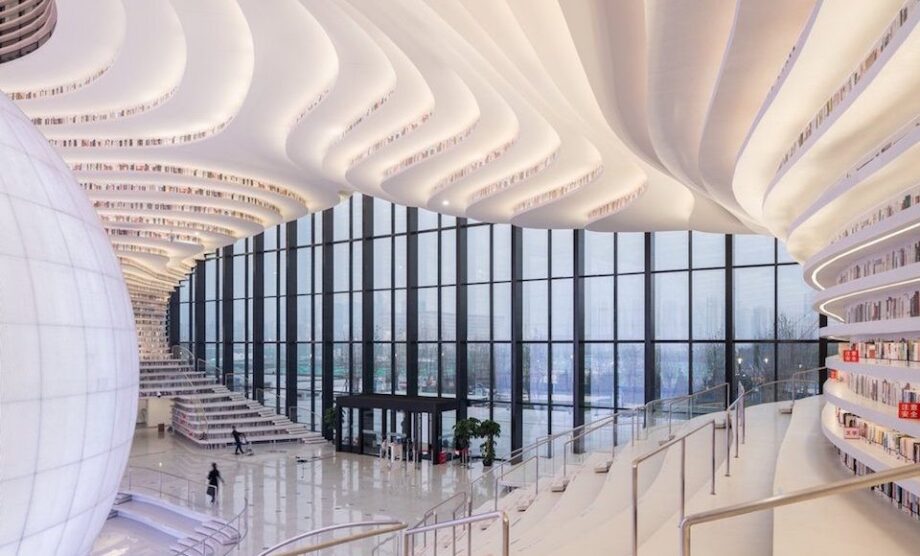 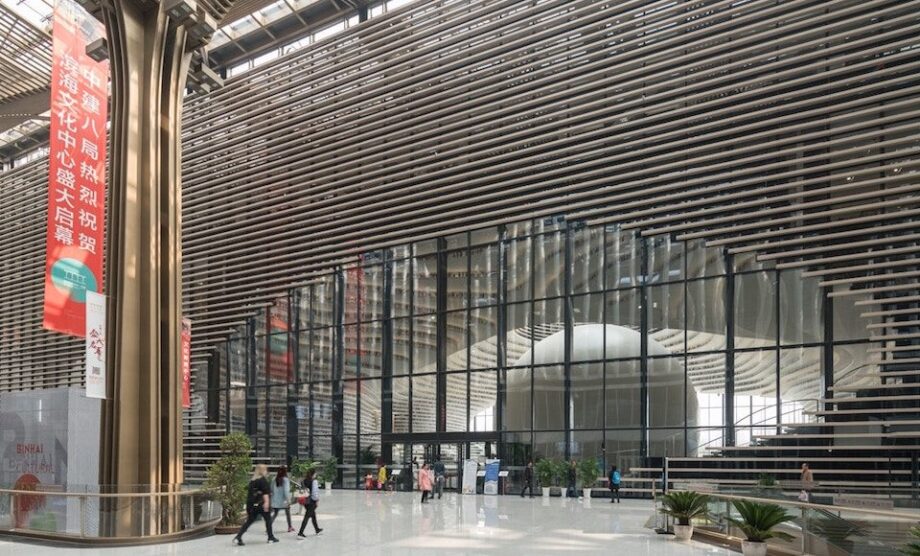