Tom Brady is the golden child of the NFL.

Ten Super Bowl appearances and seven victories. The all-time records for passing yards, completions, touchdown passes, games started and Super Bowl MVP awards. Moving to Tampa Bay at the age of 42 and getting them a Super Bowl. He’s about as close to perfect as you can get when it comes to American football.

But he’s not entirely perfect – at least as far as style is concerned.

Yesterday morning, Brady and the rest of the Tampa Bay Buccaneers were received at the White House by Joe Biden – continuing a sporting tradition that under previous US President Donald Trump had become sporadic and highly politicised. On Brady’s part, it was his first White House visit in over a decade. Brady last visited the White House like this in 2005 with the New England Patriots, having skipped later visits during the Obama and Trump administration.

Naturally, Brady suited up for the occasion, pairing a navy number with an IWC Schaffhausen Big Pilot’s Watch Perpetual Calendar Edition “Rodeo Drive” (ref. IW503001) on a leather strap. So far, so fine. But he fumbled the landing with his tie, tieing it with a clumsy four-in-hand knot that wasn’t done up tight enough. Talk about snatching defeat from the jaws of victory.

The four-in-hand (or ‘schoolboy’) knot, as the name might suggest, is one of the first knots a man is likely to learn. They’re quick, simple and produce a small knot – but they tend to sit rather asymmetrically on one’s neck and can look rather messy.

A half or full Windsor knot is a better bet if you really want to look classy (say, if you were visiting the White House), or you could try an even more complicated knot like a cafe or trinity knot if you’re really looking to impress. But a schoolboy knot is not the go, TB12. 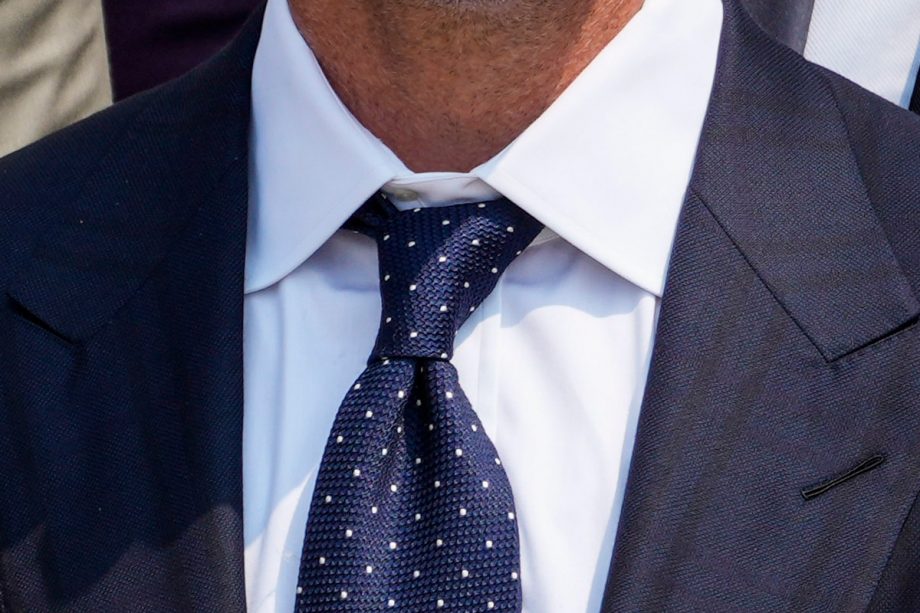 RELATED: How To Pull Off A Perfectly Knotted Tie And Look Like A Sartorial God

Brady might have been unprepared when it came to his necktie but he certainly had some impressive jokes prepared, joking about Trump’s baseless election fraud claims with Biden during his speech.

“Not a lot of people think that we could have won. In fact, I think about 40% of the people still don’t think we won. You understand that, Mr. President?” Brady quipped. He continued:

“And personally, you know, it’s nice for me to be back here. We had a game in Chicago where I forgot what down it was. I lost track of one down in 21 years of playing, and they started calling me ‘Sleepy Tom.’ Why would they do that to me?”