If you’re a regular at DMARGE, you’ll know we like to feature cool and interesting cars that are available to buy from all over the country. Uncovering those cool cars is one thing, but we get a lot more enjoyment from an advert when it’s written particularly well.

Obviously it’s nice to know the specs of the vehicle in question and maybe a little bit of history thrown in for good measure, but never have we seen a Carsales advert like the one for this 1976 T

oyota Land Cruiser, which is up for sale right now in Queensland.

It reads: “Born in the era of the longest solo instrumentals ever made, this beast will have you transported back to the 70’s!”

It’s contextually relevant, too: “Fancy a simpler time when we were all safe from pandemics and fear? Here’s your new whip.”

“This beast has survived since ‘76 so 2020 has nothing on her, fires, floods and pandemics are scared of this weapon.” 1976 was also the year Cyclone Colin hit the South Queensland coast

“Has taken on Trumps hair, drank the Clorox (an incredibly strong bleach) and came out victorious, listened to ScoMo say ‘How good is Australia’ for the millionth time and still not thrown herself off a cliff, in fact, she never skips a beat.”

Should 28 Days Later hit Australia, the owner reckons there’s no better car to own:

“This golden goose will serve you in years to come as an ego piece and member of the family during the upcoming zombie apocalypse (aka round three). Has been sized up for a sub machine gun mount on the back.”

“Engineering says it’s a go. Also for those that prefer peace, the plans are in place for a bubble gun that shoots rainbows and joy….. your choice.”

“Had a starring role in the series ‘Reef Break’ (look it up) managed to cast a shadow over all the other actors, refuses to do any more film to keep her reputation intact.”

As for the car itself, it’s a J40 Land Cruiser, which was part of the J-Series, produced from 1960 all the way through to 2001. Within that period, Toyota introduced a few variations, such as those with a longer wheelbase or with four doors instead of the more-common two-door.

The J40 more specifically was available was a two-door model that could be had with either a hardtop or soft top. Toyota would let you have it with either a petrol or diesel engine too, until it was replaced by the J70 in 1984. This particular model on sale has the newer 4.2-litre petrol engine that was used in models from 1975-1984 and gives out 101kW/135hp. 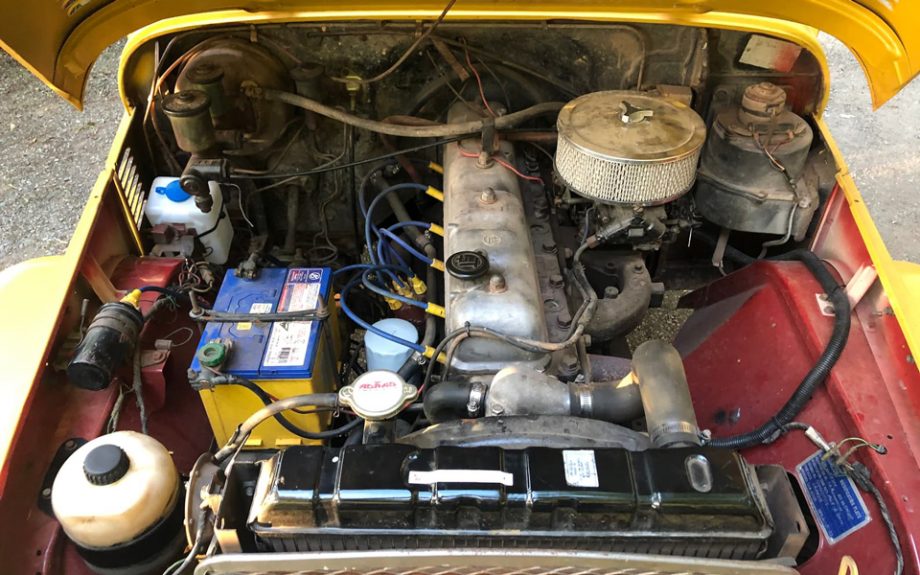 This model for sale has had custom bucket seats finished, “zero rust”, has had some new parts fitted including Good Year Wrangler AT tyres that look like absolute beasts. There’s also the obligatory bullbar on the front for pushing those zombies to the ground.

If you were to go through with the purchase of this Land Cruiser – and we really feel you should, not just for its Mustard Yellow paint job, but the fact the owner deserves money for the ad alone – you can revel in the fact that Toyota still offers parts for it as it shares more of its DNA with the J70 than you’d probably think.

It’s a sweet looking and undeniably cool car, that can be yours for $21,000. Head to Carsales now to make an enquiry.