It’s one thing to start collecting vintage watches, it’s another to know what to buy, when to buy it and how much to pay. We visited local and knowledgable watch dealer, Chris La Galle from The Watch Gallery in Melbourne and asked him the simple question, ‘what watches should we start collecting now?’ Thankfully he then gave us many nuggets of important information. This vintage watches feature looks at affordable options to assist you becoming a savvy collector. 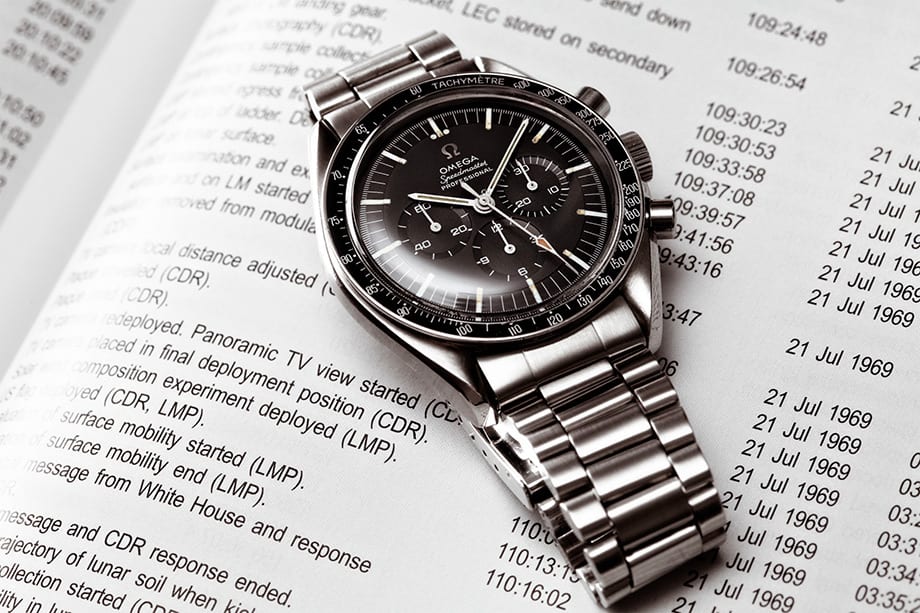 Although the technology had been around since the late 1800s, Omega didn’t introduce their first chronograph until 1957. The wait was worth it. The OMEGA Speedmaster was presented as a sports and racing chronograph, and took its name from the model’s novel tachymeter scale bezel. Since then, many notable chronographs have been produced under the Speedmaster name, including one worn during the first walk on the moon during the Apollo 11 mission. A vintage Speedmaster is a can’t-fail choice for collectors. The Speedmaster is still affordable, despite its icon status, and has maintained its value over the years. Definitely one of our preferred vintage watches. 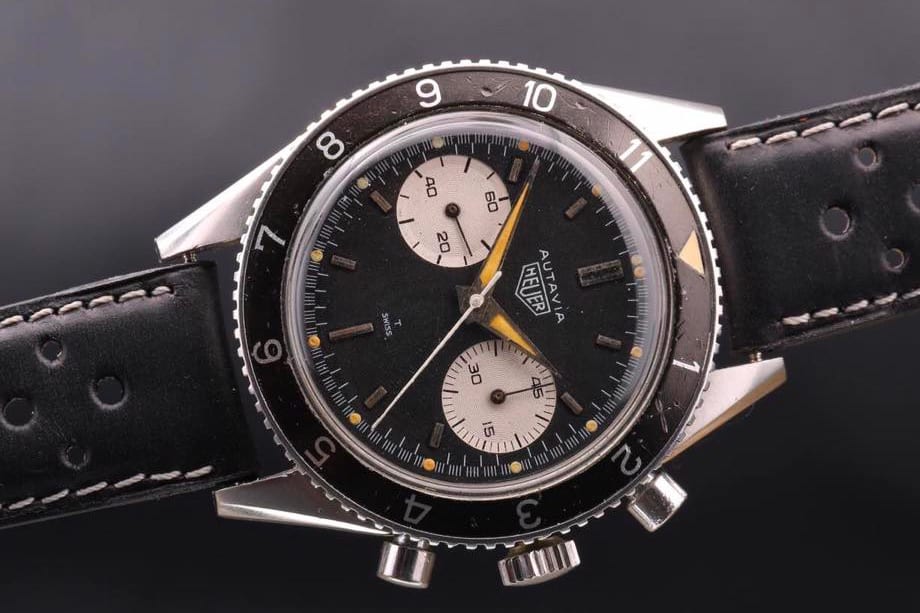 The Heuer Autavia began its life as a dashboard timer from 1933 through 1958. In 1962, the Autavia was given a makeover and carried on as a wristwatch until 1986. The name “Autavia” indicates that the chronograph was originally designed for timing Automobile and Aviation events, but in its lifetime it’s seen many uses. No other Heuer model offers such a large variation of styles and designs, so there’s probably an Autavia out there for you somewhere, regardless of your taste. Expensive versions exist, but more common ones are affordable (perhaps even undervalued). 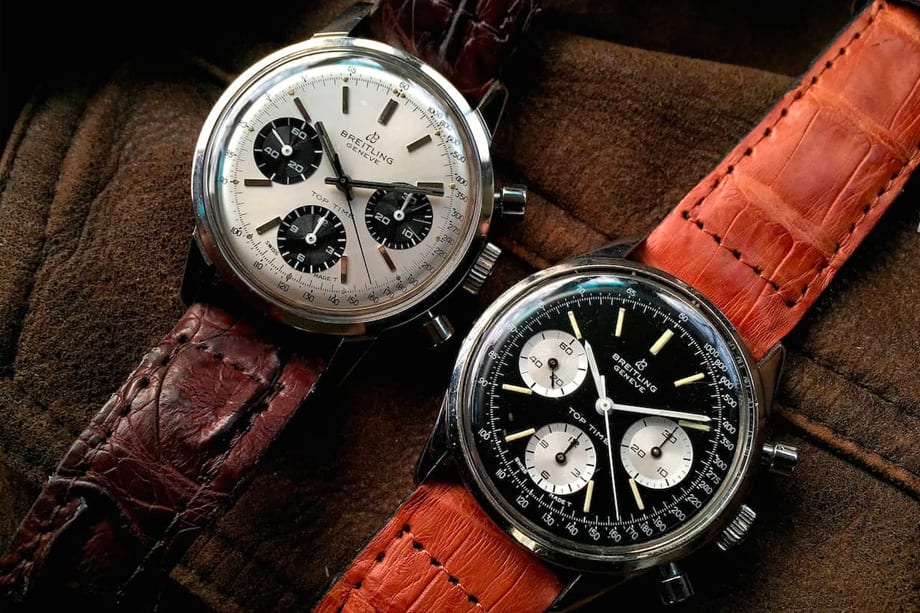 Breitling’s famous aviation chronograph, the Navitimer, was first introduced in 1952 with an innovative “navigation computer” capable of executing every calculation a flight plan requires. To this day it’s still revered by pilots and aircrews, though it’s hardly a practical watch for the rest of us to wear on a regular basis. A better choice for those of us who aren’t calculating airspeed and rate of descent is the Breitling Top Time, a watch once worn by Bond himself. The Top Time is similar to a Heuer Carrera, but is much less difficult to find. 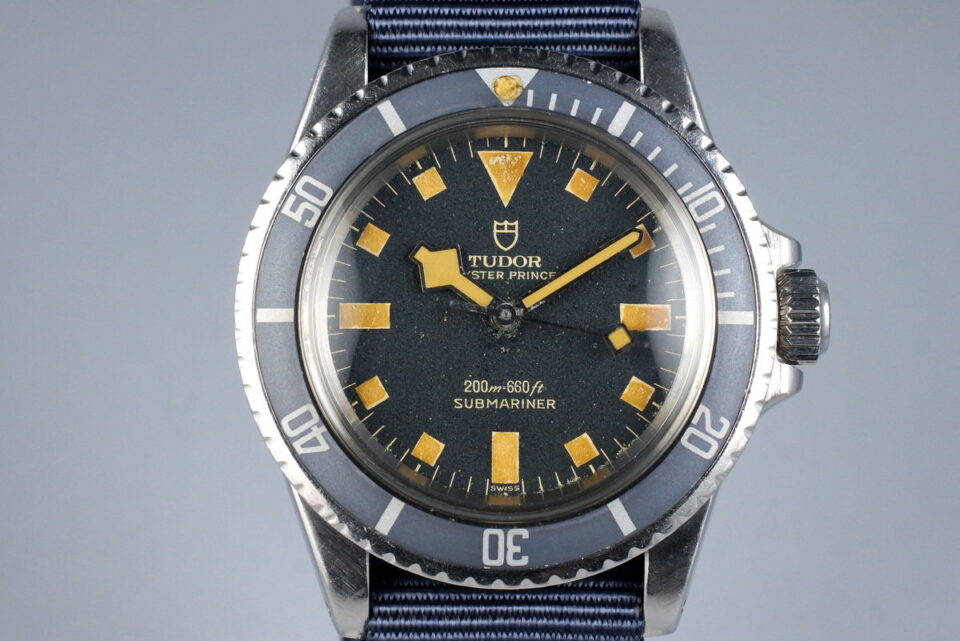 Think of a Tudor watch as a Rolex without the Rolex stigma. According to Rolex founder Hans Wilsdorf, Tudor was created in the 1950s to be a more affordable watch brand – but don’t confuse “affordable” for “subpar.” Though the movements differed, all Tudors until the mid-1990s featured Rolex crowns and cases, and Rolex bracelets were used until 1971. A safe bet is the Tudor Submariner range, which actually were fitted with the famous Rolex calibre 390, a 17 jewel movement based on the Valjoux 722 automatic, in the early days. Another of our preferred vintage watches. 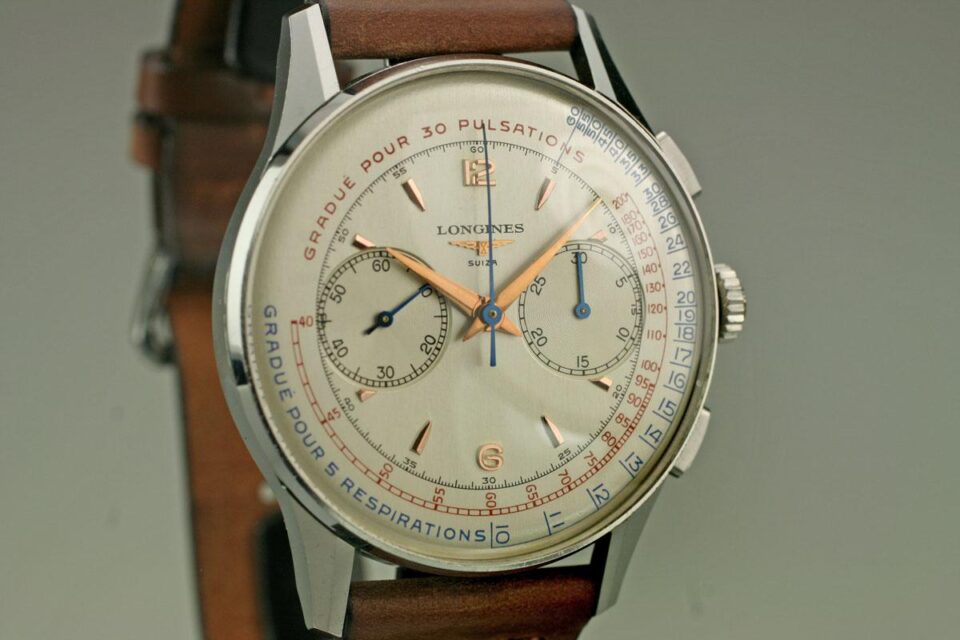 Known for its ‘Aviators’ watches (a company director was a friend of Charles Lindbergh, who designed a pilot watch for the brand after his transatlantic flight), Longines has been in business since 1832. Despite their popularity in the worlds of sports watches and chronographs, Longines timepieces are still flying slightly under the radar. Classic, simple Longines watches can be procured for under $1,000, but interest in the brand has been on the rise since the release of its heritage lines. It may be worth grabbing one of these now, before the company’s profile – and prices – increase. 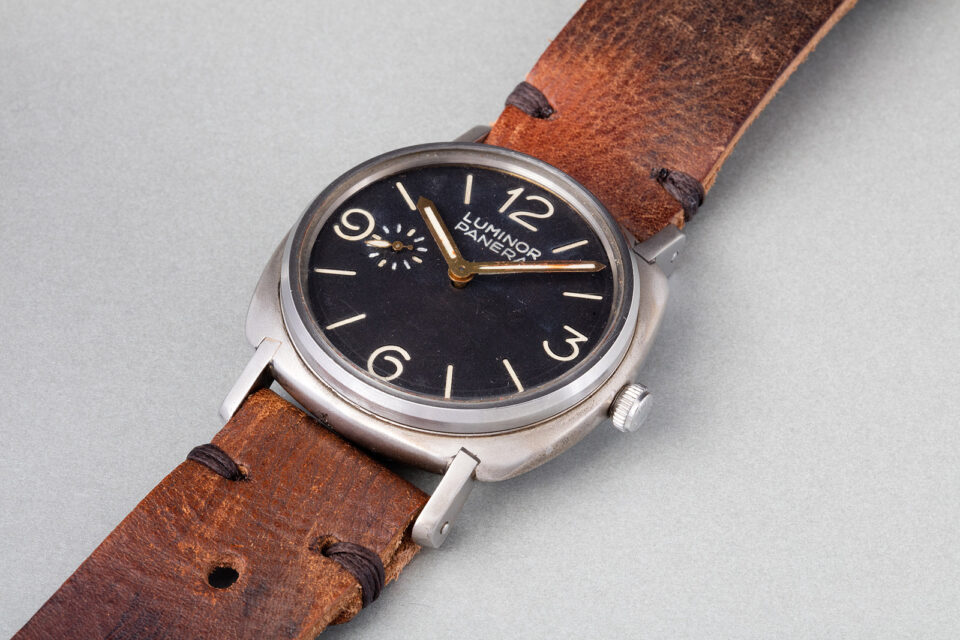 A vintage Panerai is an exceptional addition to any collector’s stash, but good luck getting your hands on one. In its initial stages, Panerai made just 300 watches, all for the Italian Marina Militare, between 1938 and 1993. Even after the brand was resurrected later in the 90s, Panerai timepieces remain scarce. Only about 1,000 were made between 1993 and 2000, and in the following years they’ve come in bursts of 500, 1000, 2000 or 4000 units. Vintage Panerai watches are hard to come by at any time, but especially here in Australia where they weren’t retailed. 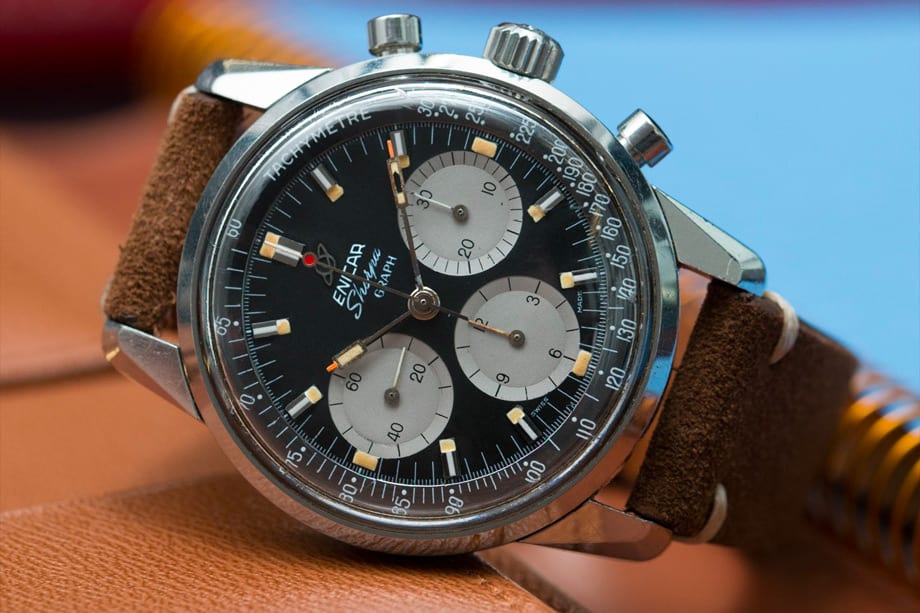 The Enicar Watch Company was founded 1913 in La Chaux de Fonds, Switzerland. Enicar was one of the first brands to use Radium to make its watches’ hands and dials readable in the dark, and its success was fast. From the mid-40s Enicar developed its first chronographs, and in the 60s and 70s it produced its own automatic movements. One of the brand’s most successful models was the Enica Sherpa, which was used during an expedition to Everest. There are many different editions of the Sherpa – which bears similarities to a Longines vintage watch or the Jaeger and IWC Compressors. 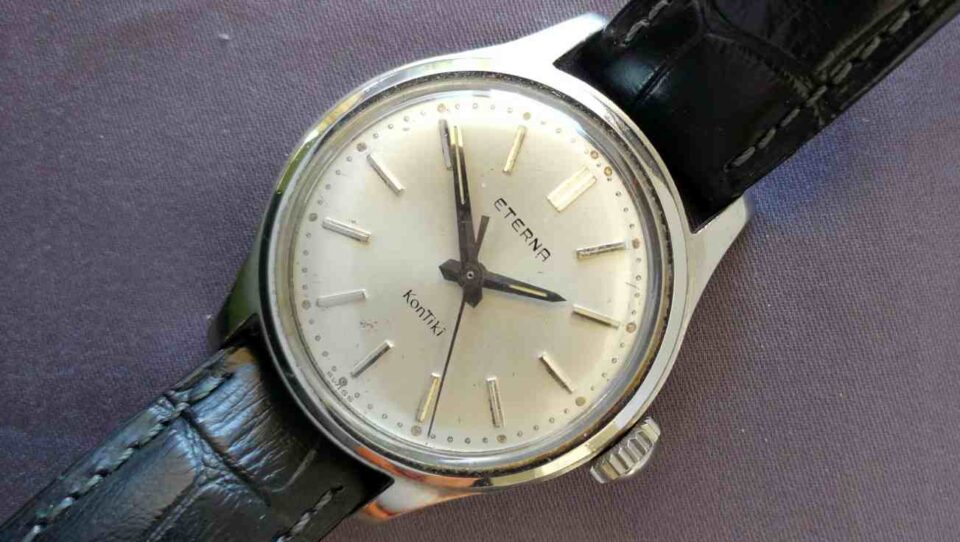 Eterna is a Swiss luxury watch company founded in Grenchen on 7 November 1856 by Josef Girard and Urs Schild. The company has been responsible for many innovations in its time, from the smallest production wristwatch with a Baguette movement in 1930, to their first automatic watch in 1938, to an advancement in self-winding watch technology in 1948. Worth a look is the Eterna KonTiki, a timepiece named after the raft used by a Norwegian explorer during a journey across the Pacific Ocean from South America to the Polynesian Islands. He was, of course, wearing an Eterna at the time. 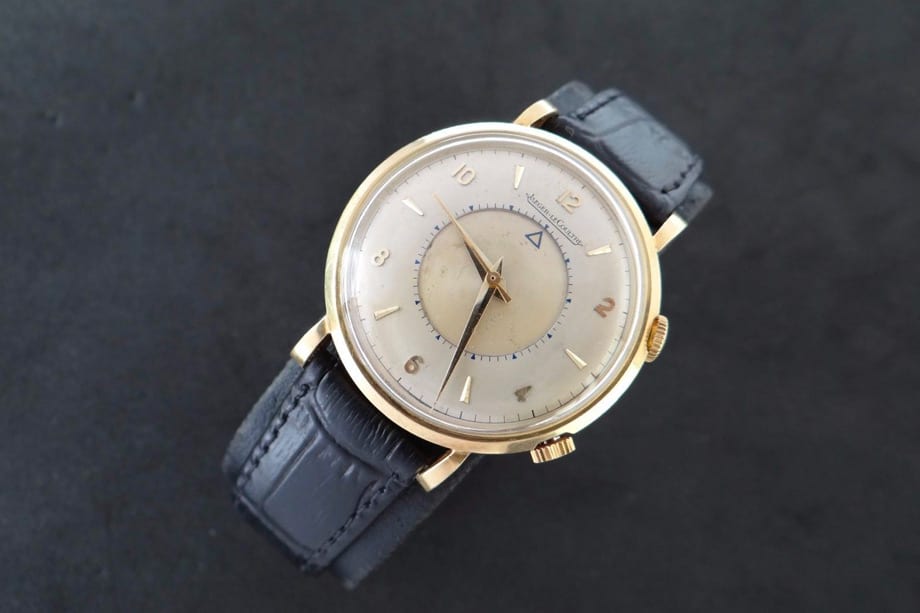 In 1956, Jaeger-LeCoultre made history when it launched the first automatic watch with an alarm function. The watch was called the Memovox – literally, the “voice of memory.” The 1960s horological icon was revamped for a limited time during 2010 as the Master Memovox, but what you’re really looking for is a piece from its original run. Expect to pay $2,500-$3,000 for the privilege of owning one of these vintage watches that is still considered one of the hottest around (at least in the vintage world), more than four decades after production ended.

Own a vintage watch? Try this clever little watch cleaner.