How To Make A Wonderfully Sophisticated Whiskey Sour 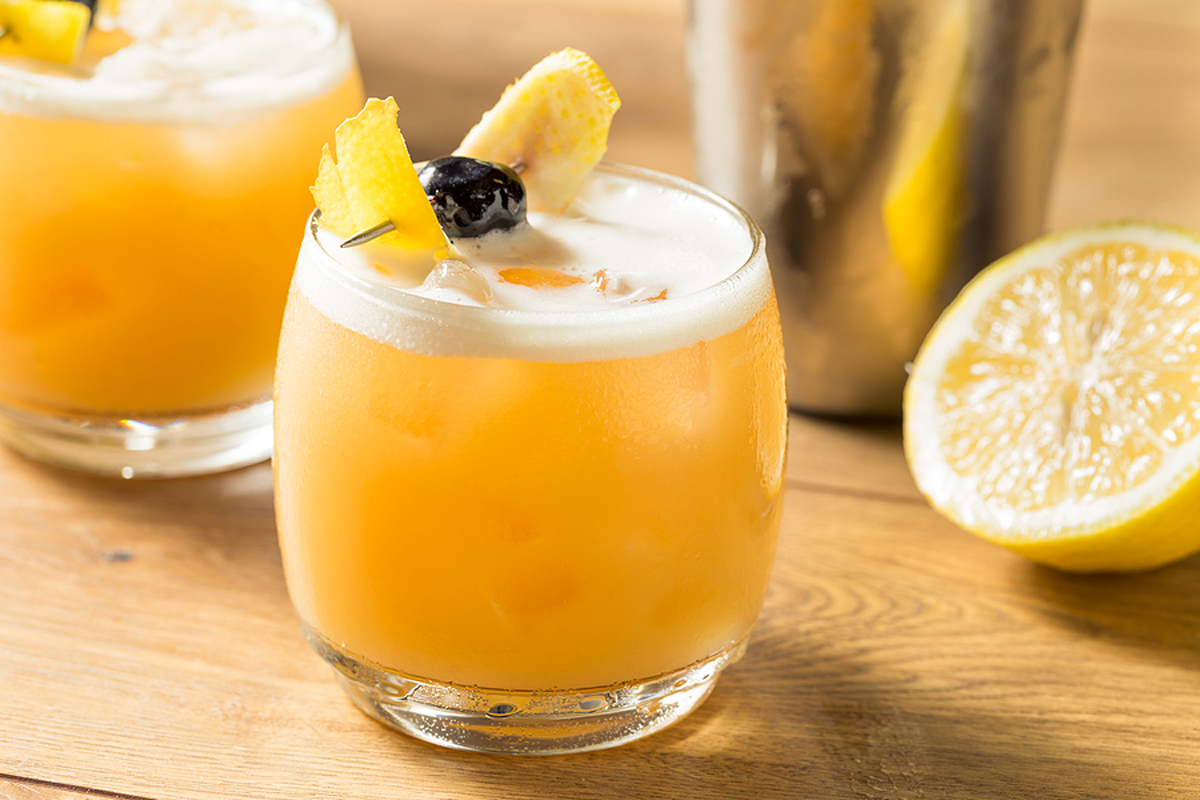 If you can’t quite get your tastebuds around the varietals of whiskey (or whisky, if you’re not American) when drinking neat or on the rocks, but you like sweet drinks and cocktails, then the whisky sour is for you. Part of the sour family of cocktails – meaning a base liquor mixed with lemon or lime juice and a sweetener, and occasionally egg white – a whiskey sour is a perfect cocktail to skip on for those with a particularly sweet tooth (contrary to the drink’s name).

While the base spirit is still the dominant flavour in a whiskey sour (we’re deliberately using the spelling of whiskey, as American bourbon whiskey is the most-used varietal), because of the addition of the other ingredients, it isn’t so harsh, so can be a good entry-point to the wonderful and convoluted world of whisky/whiskey. The history of the whiskey sour can be traced back several hundred years, and it’s believed to have been used for medicinal purposes – other than just the general taking away of the ‘hurt’ brought on by drinking.

It’s a great cocktail to learn how to make, with its method being applied to virtually any other cocktail within the sours family. It uses a couple of steps in the method that you may not have come across before, so it’s also prime time to learn some advanced cocktail making techniques.

Origin Of The Whiskey Sour

According to cocktail maestro Hayley Dixon of Proximo, the Sour cocktail is said to have been born out of the original way of making a punch.

“‘Punches are the earliest form of cocktail we know, and due to the similarity in ingredients, many think of the punch leading the way to the Sour. Whiskey was not, however, the first sour.”

“In 1856 the first mention of a sour appeared on Mart Ackermann’s Saloon cocktail list in Toronto, made with Gin or Brandy and then the first recipe didn’t appear until 6 years later in Jerry Thomas’ very famous ‘The Bartender’s Guide’, which contained a Brandy, Gin and Rum sour.”

“Interestingly the Whiskey Sour also never contained any egg white, instead, being made more in line with a Daiquiri or Margarita. Technically it was the Boston Sour that contained egg white, but that’s an argument for another day.”

History also suggests sours as an overruling cocktail family existed for several years prior to the publishing of that book, as they were said to be popular with naval sailors.

Why? Because it was found that eating or consuming citrus fruits provided vitamin C, vital in preventing sailors from contracting scurvy. It wasn’t uncommon to find naval ships stocked with lemons, lime and oranges and because the sailors enjoyed a drink (and didn’t have any way of refrigerating drinks) plenty of alcohol could be found on board too. In their downtime, it’s said the sailors experimented with mixing their various liquors with citrus juice (usually lemon) to create a scurvy-busting and delicious beverage.

It’s believed the rise in popularity of the drink, brought into public awareness by returning sailors, is what resulted in the recipe being published in Jerry Thomas’ guide.

Whiskey sours in their traditional form contain only three ingredients, although some modern interpretations include egg white as a fourth ingredient (the Boston Sour Hayley mentioned). The official recipe calls for the following:

Different bars and bartenders may use different garnishes. Some places may use a lemon peel with cherries, others may place a few drops of Angostura bitters on top.

Some bartenders may have their own ways of making the whiskey sour, such as using equal measures of each ingredient. It’s a drink that lends itself to being experimented with. But if you’ve never made one before, this is the best recipe to use.

How To Make The Whiskey Sour Cocktail

The way you make and shake a whiskey sour will depend on whether you use egg white or not, so we’ll cover both bases, starting without the egg white.

If you do want to use egg white the steps are as follows:

This method can be switched around if you prefer. Some bartenders will recommend shaking with ice first, straining the cocktail back into the shaker without the ice and dry shaking. It’s said this method will produce a larger, fluffier foam.

Variations Of The Whiskey Sour

Despite bartenders introducing their own variations of the classic whiskey sour, whether it be changing the garnish or the whiskey used, there are some official variations you may wish to try.  If you make what is known as the Boston Sour (a whiskey sour with egg white) you can float a few bar spoons of full-bodied red wine on top, turning it into a New York Sour.

Alternatively, you can make what is called a Ward 8. This cocktail is based on either bourbon or rye whiskey, uses grenadine syrup as the sweetener instead of simple syrup and will be garnished with both lemon and orange slices. A Ward 8 doesn’t use egg white.

Expert Twist On The Whiskey Sour

We once again turned to Hayley for her expert twist on the whiskey sour, and she gave us one based on another well-known variation.

“From the whiskey sour came many incredible variations. At first many were made by simply splitting the base ingredient, the whiskey, with something else. Take Sam Ross’s Midnight Stinger that uses half bourbon and half Fernet Branca for the base. From there, others went on to change the type of sweetener used to add extra complexity, like in the Penicillin that uses a ginger honey instead of simple syrup.

“A cocktail that in my opinion does not get consumed nearly enough is a cocktail called the ‘Camerons Kick’ which incorporates both of these techniques. It first appeared in The Savoys cocktail book and is a whiskey sour made using both Scotch and Irish whiskey with Orgeat as the sweetener. This little twist is simply that with some added bitters and grapefruit.”

How To Drink A Whiskey Sour Cocktail

A whiskey sour is traditionally served before dinner, but if you’re out at a bar and you order one, the bartender will likely view you as someone with sophistication. A whiskey sour is a drink that someone who knows cocktails will order to enjoy the tastes and textures, not just someone who wants to get blind-drunk. For that, you may as well just order a vodka and soda water.

What whiskey is best for whiskey sour?

For a classic whiskey sour, bourbon is the top choice. Traditionally, the drink calls for 80-proof bourbon for the base. Still, you can use any whiskey that you like to drink neat so the flavor comes through in the cocktail.

Can you use an instant sour mix for whiskey sour?

By all means, you can use an instant sour mix for your cocktail if you do not have time to juice lemons and make a simple syrup. Just choose the good ones in the market.

What are other popular whiskey drinks?

Whiskey blends well with mixers so there a number of popular cocktails to choose from. You can try Irish Coffee, Old Fashioned, Manhattan, Whiskey Smash and Sazerac.