In an era where sexual misconduct is no longer tolerated, it appears that women have one remaining ‘safe zone’ where they can live out their most debaucherous tendencies: the nightclub.

New Australian research published in the UK journal Ethics and Behaviour found that women groping men in nightclubs was generally more tolerated than men behaving in the same way.

The study which was conducted by the Edith Cowan University accounted for 381 regular nightclub patrons (342 female, 39 male, all heterosexual) within the ages of 18 to 30. It surveyed the subjects on four key behaviours in nightclubs (below) and found that both sexes believe that it was “socially acceptable” for women to be “handsy” in a nightclub setting. 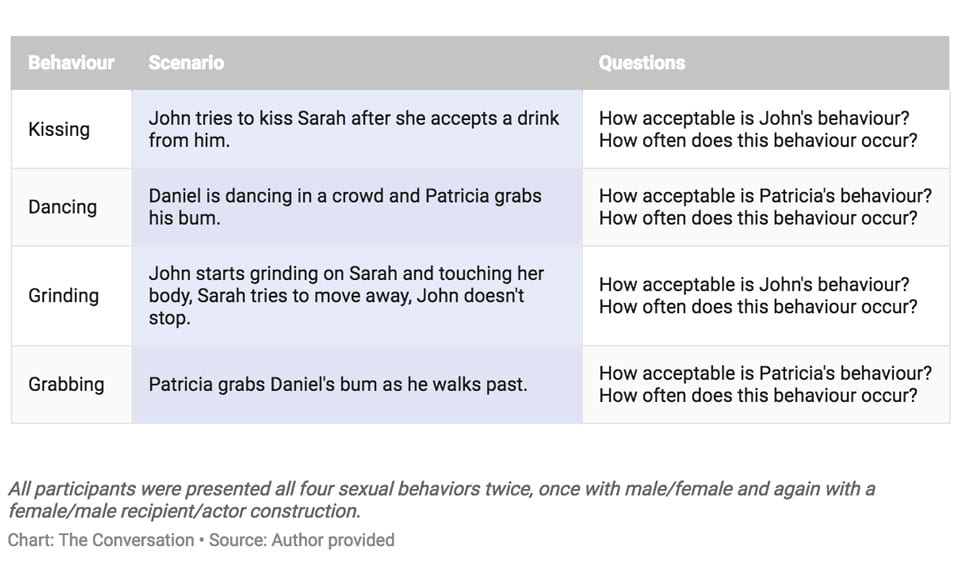 The study’s researcher, Aimee Wrightson-Hester, attributes this to the perception that this kind of behaviour is more damaging to women than it is to men.

“The stigma and harm perceived to occur when men engage in these behaviours (was viewed as) worse than when women do it,” Wrightson-Hester told the SMH.

Even more surprising from the study was the fact that some male subjects admitted that if the woman was attractive, they’d welcome the action of groping.

“It seemed to be that if the man perceived the woman as attractive, they would be more OK with the behaviour.”

So does this mean that men in nightclubs are just happy-go-lucky male sluts? Close, but not quite.

The wider part of the study actually confirmed that men tended to engage in groping, grabbing, and pinching a person on the buttocks much more than women –  a behaviour which is so common in nightclubs that it’s almost become normalised. It’s when the tables are reversed though that things get interesting.

“The question of consent is far less clear in the highly eroticised setting of a nightclub, so people say they largely turn a blind eye because you can’t be sure whether an individual’s sexual behaviour is being welcomed or not,” says Wrightson-Hester.

So is it an issue that today’s women are becoming more like men? This writer thinks not.

The line is essentially down to your own personal preference, values and boundaries. If a lovely grandmother tapped us on the behind at the local shops before uttering the words “cute button” with a sly wink, we’d laugh it off and walk away before becoming the butt of the joke amongst buddies. But that’s just us and we’re not advocating that kind of behaviour – which is exactly what the study found.

“(Despite the fact) that all the behaviours were rated as unacceptable (by both genders) they’re still occurring,” adds Wrightson-Hester.