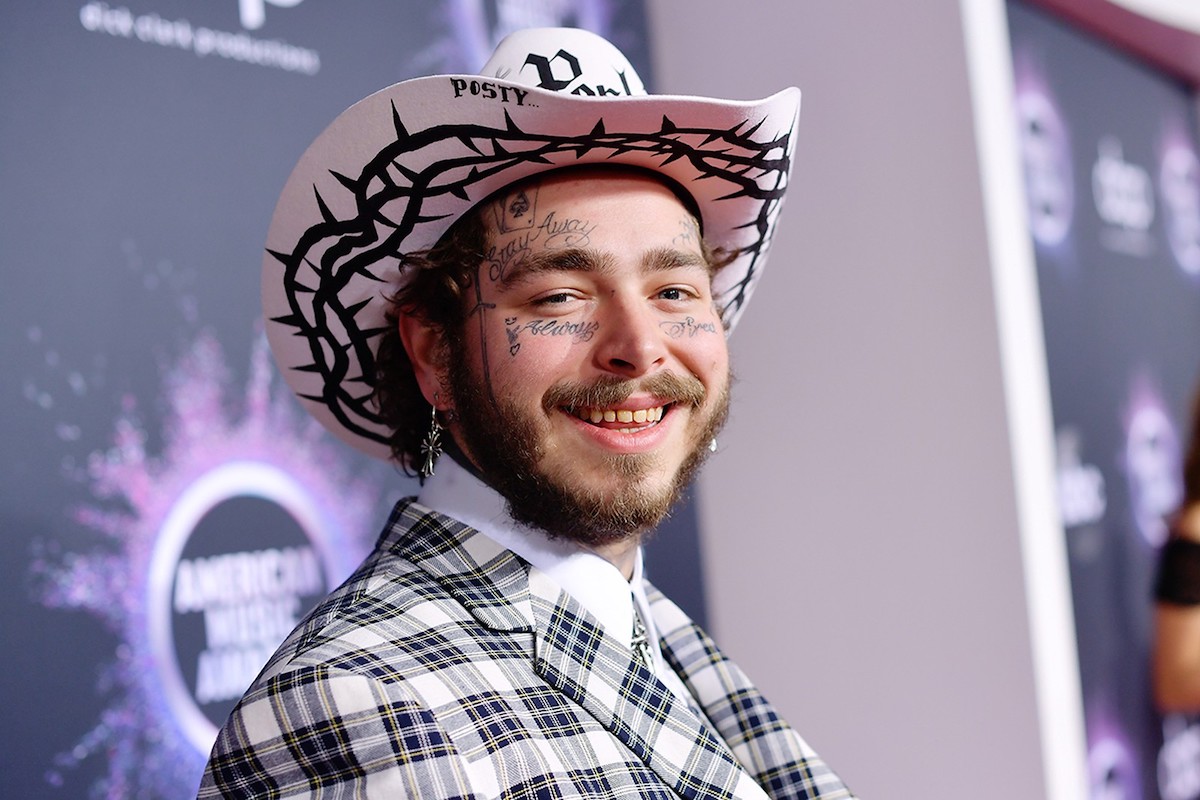 Post Malone is one of the music industry’s most unlikely success stories… As well as an unlikely men’s style icon.

The boozy, vibrato-voiced rapper and singer/songwriter is easily one of the most popular hip-hop artists worldwide. Covered head to toe in tattoos and famously quite a grungy dude, Post Malone (real name Austin Post) also boasts one of the most unique fashion senses in the ‘biz – just as home in a Western-style suit and cowboy hat as he is in baggy streetwear and slides. Hell, the dude even has his own collaboration with Crocs.

Speaking of brand collaborations, his latest one has also revealed a new look for the 25-year-old Texan. Posting to Instagram to promote energy drink brand Monster, Post showed off a new ‘Caesar cut’ hairdo, some big Gothic earrings and a Saint Laurent leather jacket while relaxing in the glow of a recording studio.

It’s a surprisingly mature, dapper look for the sometimes very boyish rapper – and reveals how this once-maligned haircut is becoming cool once again.

The Caesar cut, named after the look favoured by Ancient Roman emperors (but more commonly rocked by ‘roadmen’ and rascals across the Atlantic) enjoyed a brief style renaissance in the 90s, when it was rocked by celebrities like George Clooney and, rather appropriately, Eminem – another ludicrously famous white rapper.

In recent years, however, the Caesar cut has fallen by the wayside, with the most famous supporter of the hairdo being Facebook founder Mark Zuckerberg. Zuck’s version of the cut is notoriously awful, the billionaire even being publically roasted by a United States Congresswoman for his questionable style, Mashable reports.

RELATED: I Got Brad Pitt’s ‘Fight Club’ Haircut & Now I Deeply Regret It

But Post’s new hairdo is no ‘Zuck cut’. Instead, it’s a masterclass in how to execute the Caesar cut properly. It frames his face nicely, not exposing too much forehead, and has a nice, blended edge. Post’s nicely trimmed facial hair compliments the haircut well too: it makes him look youthful, but not boyish, which is the big trap the Caesar cut can fall into (case in point Zuck). Although Post’s huge number of face tattoos means he’s unlikely to even be confused with a schoolboy no matter what follicles he’s rocking…

While he appeared on a smattering of singles last year – such as Justin Bieber’s Forever and Ozzy Osbourne’s It’s A Raid – Post hasn’t released any new music since his 2019 album Hollywood’s Bleeding. Instead, it seems he’s been focused on his side hustle, making wine: he recently announced that his successful rosé brand, Maison No. 9, is now available in the UK. Fingers crossed it comes Down Under, too (and that we might see some new music from him in 2021).