Do you sunbake or sunbathe? Apparently, there is a difference… 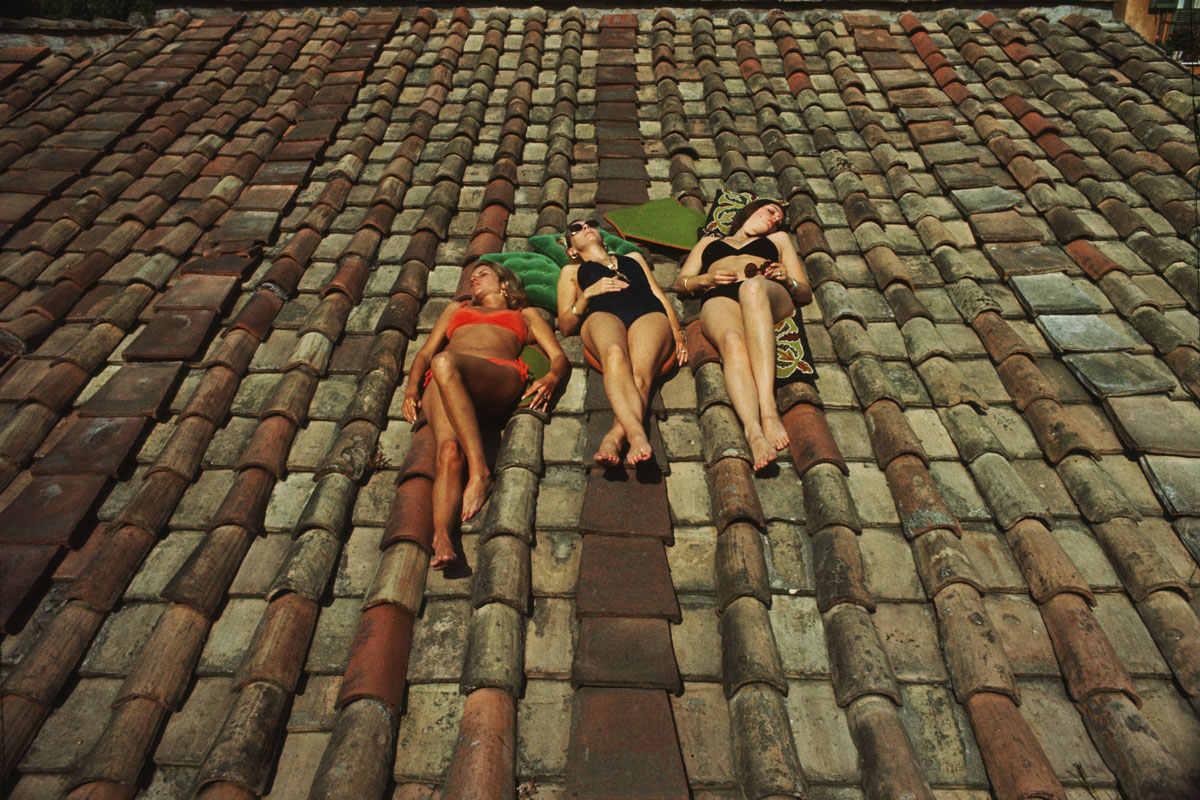 Three sunbathers stretched out on a roof in Rome, Italy. (Photo by David Lees/Corbis/VCG via Getty Images).

Smoking. Poisoning your enemies. Populism. Leaving your car idling with the hazard lights on while popping into the newsagent to buy cigarettes. Annually throwing 40 metric tonnes of tomato down the drain. Paying for sun loungers on the beach. Calling thongs “flip flops.”

There are a lot of European habits Australia has (arguably) done well to avoid.

There is one we might be able to learn something from though: sunbathing.

Before we get into it, this comes with a big red disclaimer: there is good reason sunbathing is different in Australia.

As many tourists have found out: waddle around with your shirt off in Sydney’s Hyde Park in December and you’ll receive a nasty red rash, not a luscious brown tan (not that brown tans are good for your skin either).

Fall asleep on the beach in Manly or Coolangatta and you’ll wake up looking like a lobster, not a greek god or goddess.

But there are some aspects to European sunbathing Australians can learn from. This is summed up well, we believe, by the following photo, taken by Carlos de Andres on the stairways of Madrid’s Retiro Park. 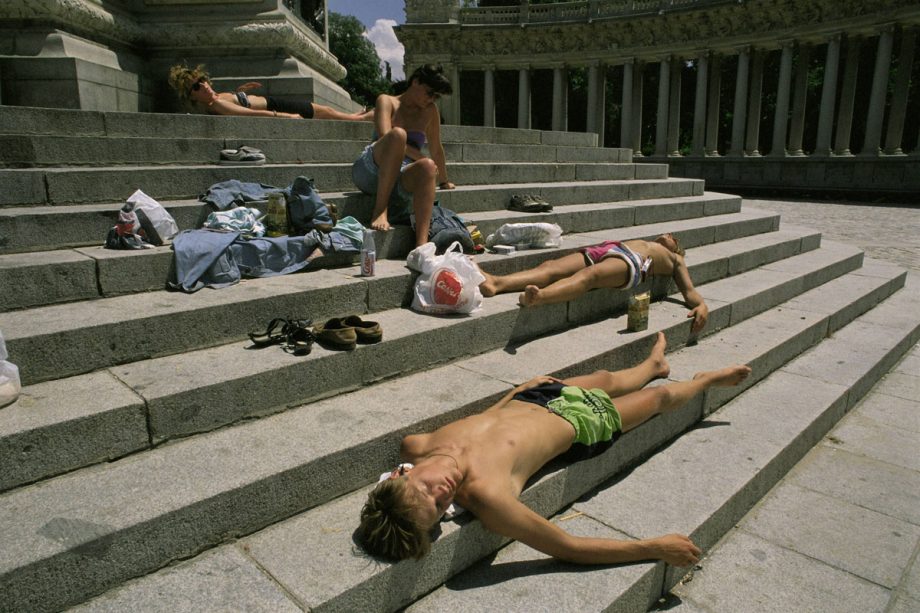 Young people having a sun bath on the stairways of the Lake of the El Retiro Park (Photo by Carlos de Andres/Cover/Getty Images).

Though elitists might say the plastic bags lower the tone of the photo, we reckon this image is a classy classic, much in the same way Julio Iglesias washing down his KFC Family Bucket with a bottle of Château Lafite-Rothschild on his private jet in 1986 was a classy classic…

As Craig Sinclair, Chair, Public Health Committee, Cancer Council Australia, said in 2017: “In summer most of us get enough Vitamin D through incidental sun exposure – deliberate excess sun exposure, even for those with Vitamin D deficiency, is never recommended.”

He went on to say: “Two in three Australians will be diagnosed with skin cancer in their lifetime. Sunscreen has been proven to prevent skin cancer, including the most deadly type – melanoma.”

Again, to clarify, sunbathing is not good for you. Neither is sunbaking. Don’t do it.

That said, there are still some interesting aspects to the devil-may-care mentality of European sunbathing we believe many Australians could learn from. Yes: they have the luxury of being more laissez-faire about it, having more of an ozone layer. But you can take the ~philosophy~ underpinning this photo and apply it to other areas of your life, even if you don’t start going out and cooking yourself.

What do we mean by philosophy?

Living in the moment, spontaneity, wringing out maximum enjoyment from minimal resources, taking pleasure in the simple things. Not feeling guilty about being a little bit selfish. Why? In the long run, taking that ‘sick day’ to marinate on the balcony (or if you care about your potential melanoma prospects, read a book indoors), is better for both you and your business, if it helps keep your mental health in a good place.

RELATED: Psychologist Reveals How To Take A Mental Health Day Like A Champion 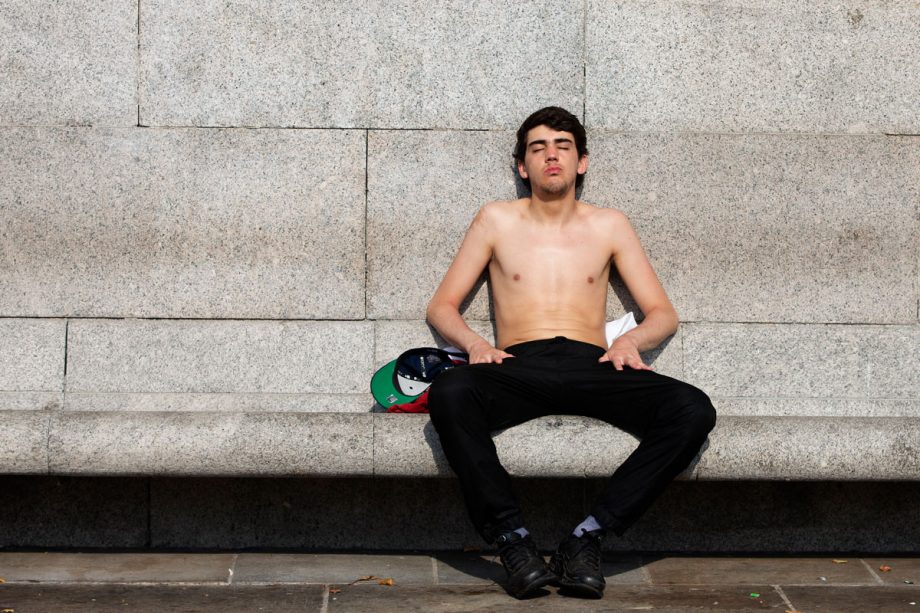 A man sunbathes with his shirt off at Trafalgar Square on August 9, 2020 in London, United Kingdom. Southern England saw several days of high temperatures, with the mercury hitting 36.4C at Heathrow and Kew Gardens, England’s hottest August day in 17 years. (Photo by Hollie Adams/Getty Images).

But back to the European sunbathing philosophy. What can we learn from it? What does it look like? We’ll put it this way: listening to a cliché Youtube house music mix on a London rooftop, while lying on a towel, on cement, with a couple of beers, can be just as enjoyable as a stay in a luxury northern NSW Airbnb. No hassle, no planning, just: “Oh, the thermometer isn’t frosty today!”…

Or using your shirt as a pillow and drinking store-bought Coca-Cola, as per the photo that inspired this article in Madrid. Not healthy for the body, but a potential opiate for the mind… 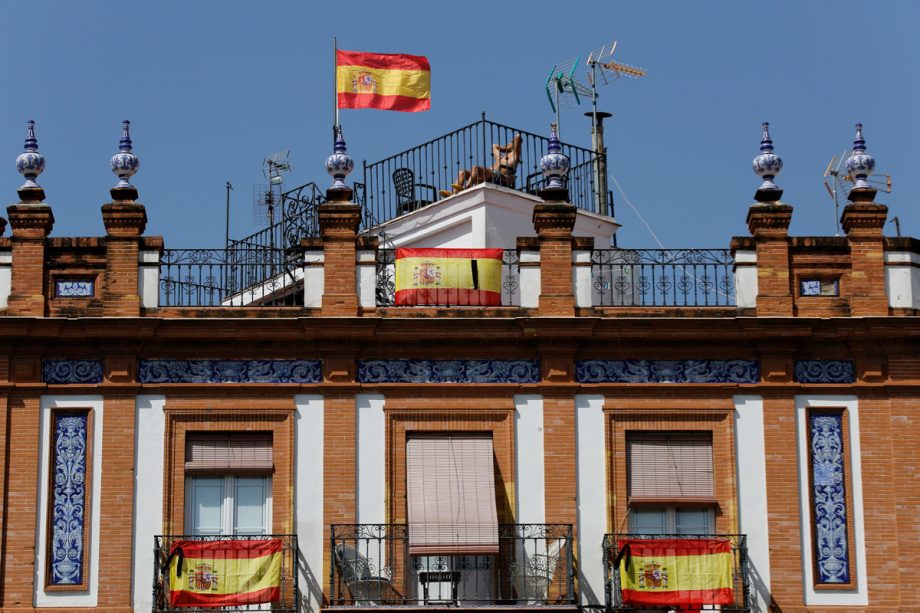 Who knew? You don’t need sand to sunbake! A man sunbaths on the roof of a building on May 04, 2020 in Seville, Spain. (Photo by Marcelo del Pozo/Getty Images).

The above photo of summer 2020 in Seville shows a sunbather in Spain adapting to last year’s lockdowns. With summer 2021 now in full swing and Europe in some ways improving (and in others not out of the woods) it will be interesting to see how things unfold this year. 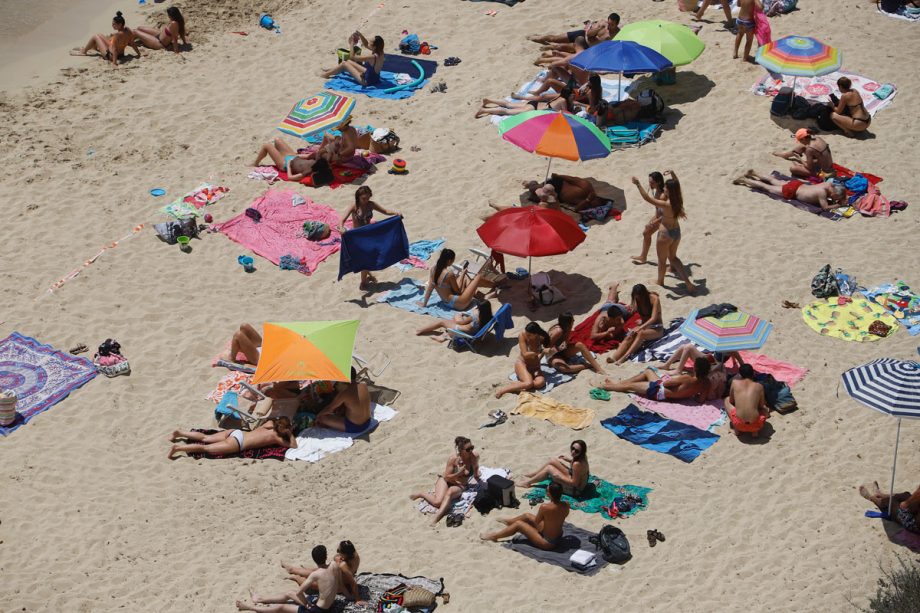 People sunbathe in Portals Nous beach in the island’s municipality of Calvia on May 31, 2020 in Mallorca, Spain. (Photo by Clara Margais/Getty Images).

Europe’s sunbathing philosophy can also be applied to your holidays in Australia, whilst borders remain closed. Simple is often better, and a good holiday is often about who you’re with (and what you eat). Also: improvising can be very rewarding (unless you have a specific challenge you want to tick off, the completion of which can be another source of satisfaction).

For more tips on how to look after yourself in 2021, look below.