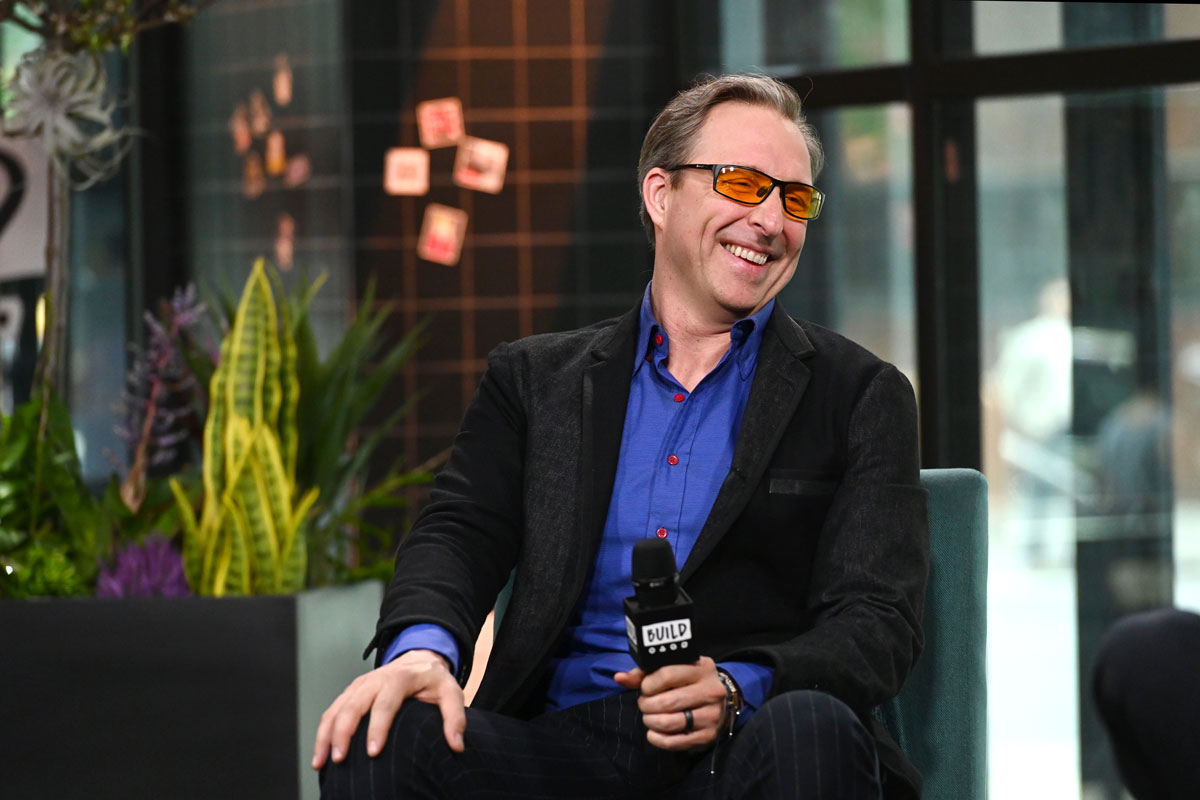 Renowned American biohacker Dave Asprey has taken to Instagram to ask: “What if you had to show your vitamin D passport before you travel?” Provocative or thought-provoking? You be the judge.

In the caption, the 47-year-old health guru, who sells his own line of vitamin D, wrote: “We have known for 25 years that having adequate levels of vitamin D can reduce all causes of mortality and makes you less likely to get an infection (viral or bacterial).”

“Why are we considering forcing people to get an expensive new technology that works against only one virus when we could lower the broad-spectrum infection risk globally with a cheap nutrient far more effective at saving lives from all diseases?”

“I’m starting to think that teachers should start shaming kids who don’t have high enough vitamin D levels… Oh, wait, shaming kids is something you should never do.”

One Instagram user wrote: “I agree with you Dave! Everyone is getting so caught up and focused only on one vaccine and not on other things we can do to improve our health and keep us safe!”

Another commented: “But Dave they cannot make billions in dollars on Vit D so … I guess we can say they would not work.”

One wrote: “The suggestion that vitamin d would have prevented the pandemic is dangerous and ludicrous.”

Others said things like: “much like low levels of vitamin D, this post is needlessly inflammatory” and “vitamin D doesn’t stop the spread of covid. It can maybe help YOU be asymptomatic. That’s not the same thing.”

Others hit back with claims like: “Since vitamin D would help a person not get the virus…they, therefore, are less likely to pass it on since their immune system kills it off very early on.”

“It’s the same in this sense as how the vaccine works. There is still a chance to pass on the virus after having the vaccine, I’m sure you know.”

According to Pbs.org, researchers in one study found that fully immunized participants were 25 times less likely to test positive for COVID-19 than were those who were unvaccinated. Pbs.org also wrote: “Findings like this imply that if vaccinated people are so well protected from getting infected at all, they are also unlikely to spread the virus.”

That said, as Project Coordinator & Staff Scientist at Vanderbilt University Medical Center, Sanjay Mishra, wrote in The Conversation, though the evidence is promising (that vaccines reduce the spread) it is not “ironclad.”

“Immunologists expect vaccines that protect against viral illnesses to also reduce transmission of the virus after vaccination,” Mishra wrote. “But it’s actually tricky to figure out for sure if vaccinated people are not spreading the germ.”

“COVID-19 poses a particular challenge because people with asymptomatic and pre-symptomatic infections can spread the disease – and insufficient contact tracing and testing mean those without symptoms are rarely detected. Some scientists estimate that the number of asymptomatic COVID-19 infections in the overall population could be 3 to 20 times higher than the number of confirmed cases. Research suggests that undocumented cases of COVID-19 in people who either were asymptomatic or experienced very mild disease could be responsible for up to 86% of all infections, though other studies contradict the high estimates,” (The Conversation).

“In one study, the CDC tested volunteer health care personnel and other front-line workers at eight U.S. locations for SARS-CoV-2 infections weekly for three months, regardless of symptoms or vaccination status. The researchers found that fully immunized participants were 25 times less likely to test positive for COVID-19 than were those who were unvaccinated. Findings like this imply that if vaccinated people are so well protected from getting infected at all, they are also unlikely to spread the virus. But without contact tracing to track transmission in a larger population, it’s impossible to know if the assumption is true.”

“What we know for sure is that if someone does get sick with COVID-19 after vaccination, in what is called a ‘breakthrough infection,’ symptoms will be milder. Studies have found that people who tested positive for COVID-19 after getting just their first vaccine dose had lower levels of virus in their bodies than unvaccinated people who tested positive,” Mishra added.

“The researchers believe the decreased viral load hints that vaccinated people who do contract the virus will be less infectious because they will have much less virus that could be spread to others.”

Mishra also pointed out: “A preprint study which has not yet been peer-reviewed suggests that the Moderna mRNA COVID-19 vaccine can produce coronavirus-fighting antibodies in the oral and nasal fluid. Since that’s where SARS-CoV-2 makes its entry, antibodies in the mouth and nose should block the virus from getting into the body, effectively providing ‘sterilizing immunity.’ This would also mean vaccinated people probably wouldn’t spread the virus through respiratory droplets.”

“These bits of evidence are promising. But without more studies, scientists cannot yet conclude that COVID-19 vaccines really do protect against all transmission. Studies attempting to directly answer this question through contact tracing are just beginning: Researchers will track COVID-19 infections among vaccinated and unvaccinated volunteers and their close contacts.”

What is clear, is that vaccination is effective at preventing disease, hospitalisation and death from COVID-19, in those getting the jab.

The Australian Government Department Of Health states: “Both the Pfizer and AstraZeneca COVID-19 vaccines are very effective at preventing disease, hospitalisation and death from COVID-19. Countries that have rolled out both vaccines have done studies based on real world data.”

Heading on back to Asprey’s Instagram post, the debate over vitamin D continues, with some commenters saying they had lost faith in Asprey since he posted his thought experiment.

One commenter wrote: “I used to follow you but posts like this prove you’re no better than [Fox News’] Tucker and Hannity. To be respected and taken seriously these posts will be your fall from grace. You’re trying to stir up the ‘they are taking our freedoms away base to get there votes. In your case sales. You’re playing both sides for profit and it shows. It’s hard to tell the difference between you and the pillow guy. Please reconsider your approach.”

“You are a bright guy who is getting addicted to attention and if you know it or not you’re getting off on making it political in all your posts lately. You’re better than this Dave. take a break and rethink things. so five years from now you won’t regret these moronic posts. Unless it’s all about sales at whatever cost – then you’re doing great!”

Another Instagram user wrote: “Reducing the chance doesn’t eliminate the disease. Kind of an irresponsible comparison to make. I’m not saying vitamin D isn’t important but shilling it as a cure-all that’s better and more effective than vaccines? Common now, I’m not about to go out plumbing with no hepatitis shot and a bottle of vitamin d (that I’ll probably just piss out anyway).”

Yet another commented: “One virus that killed 3.5 million people worldwide and nearly 600k in the US… all for promoting vitamin d to better our overall health as well.” Asprey responded to this by writing: “Let’s compare that number to the number of lives we would save with adequate vitamin d globally. It’s a drop in the bucket.”

According to Healthline, “Vitamin D is a fat-soluble vitamin that plays a number of critical roles in your body.”

Healthline states that vitamin D is especially important for immune system health, so it is understandable many people are wondering whether supplementing with vitamin D may help reduce the risk of contracting COVID-19.

“Some research shows that having healthy levels of vitamin D can help keep your immune system healthy and may protect against respiratory illnesses in general,” Healthline relates.

Healthline also claims that “a recent study indicated that patients hospitalized with COVID-19 who had sufficient levels of vitamin D had a decreased risk for adverse outcomes and death.”

It doesn’t say it’s a magic solution, however, and it emphasises the importance of physical distancing and proper hygiene if you want to avoid contracting the virus.

Though some commenters on Asprey’s Instagram post have shared their positive experiences with vitamin D (“my depression and immune system are so much better since we started taking vitamin d”), others still can’t get over Asprey’s audacity.

“If Americans were mandated a passport of good health the country would become paralyzed to a higher degree than any viral infection imaginable,” one wrote.

“This is a stupid comparison,” wrote another.

Others weighed in on how Asprey’s hypothetical – if it became anything more than a hypothetical – could prove a slippery slope: “How bout you’re ‘im a healthy weight card,” one wrote.

Another posed a thought experiment of their own: “There is a list of vaccines needed to travel to many countries, such as those in South America for example. Typhoid, Malaria, Diptheria, Hepatitis A and B, Measles, Polio. I guess those of you touting Vitamin D assume it would prevent these illnesses? Care to take a chance?”

This hypothetical inspired comments backing it up like: “No one believes the population-wide efficacy of vitamin D is high enough to change anything. Most of us are here today on Instagram because of the vaccines we received as children. Vaccines are highly efficacious and it is hard to argue that society will be better off infecting everyone with Covid with or without vitamin D vs. injecting everyone with the covid vaccine. At a population level the vaccine and vaccines, in general, have a better safety profile than the covid virus.”