How Louis Cartier Shaped What We Wear On Our Wrists

A closer look at the history of shaping time.

The following article has been produced in partnership with Cartier

Metal hinged bracelets and several of the world’s most iconic watch case designs all share a common DNA – Louis Cartier’s workshop in Paris.

A History Of Shaping Time 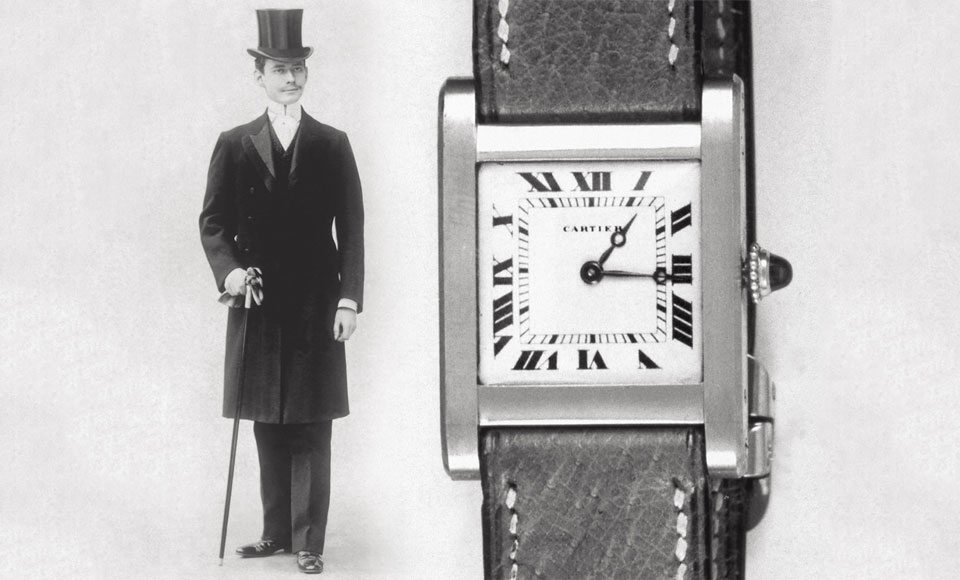 Louis was the vanguard of modern watch design and while he wasn’t the first jewellery designer or watchmaker to morph the mechanics of timekeeping into a wearable status symbol, his Paris workshop produced a series of case designs a century ago that have influenced almost every watch shape that has followed.

By the early 1900s, the Paris-based jewellery house – founded by his father, Louis-Francois Cartier – had already established a strong reputation in watchmaking. As legend has it, the audacious French aviator, Alberto Santos-Dumont, requested that Louis Cartier design a watch that could be worn on his wrist – thereby freeing hands to tackle other challenges in the cockpit during flight. The square design of the “Santos” remains as stylish and relevant today.

“Influenced by the overhead shape of the first armoured vehicles of the Great War.”

Approaching 100 years to the day, Louis Cartier produced his first six Tank watches and put them on display at his Paris Boutique. The creativity and beauty of Cartier’s elaborate jewellery pieces were in direct contrast to the human suffering of The Great War; dragging into its fourth winter and locked in stalemate less than 250km from his workshop. Citizens of Paris, indeed the world, needed an escape. For those wealthy enough, the Cartier workshop and boutique offered some reprieve.

In 1916, Louis Cartier sketched initial designs for the Tank watch as battlefield tactics evolved on the Western Front. Influenced by the overhead shape of those first armoured vehicles, his first prototype was presented to General John Pershing, the commander of American forces in Europe. After the war had ended, Cartier made the Tank watch in limited numbers.

As was the custom of the time; and well before a number of well-known brands made their own in-house movements, Cartier relied on Edmond Jaeger to produce a thin mechanical wind movement for his Tank watches. Jaeger was one of the best watchmakers in Switzerland and Louis Cartier was already collaborating with another Swiss manufacturer, LeCoultre, to supply specific materials for the case and bracelets that followed.

A time-honoured favourite within aristocratic and celebrity circles, the Tank has enjoyed a loyal following, not to mention a style legacy that continues today with subtle refinement. With the Tank, Louis Cartier introduced the Blue Sapphire mounted in the crown; a distinctive hallmark of the brand that endures today.

A Movement For Every Moment

A design as geometrically mesmerising as the Tank de Cartier deserves more than just a single vessel design. As the modern representation of the original concept created by Louis Cartier a century ago, the Tank timepieces of today comprises of 38 different models across six unique designs. 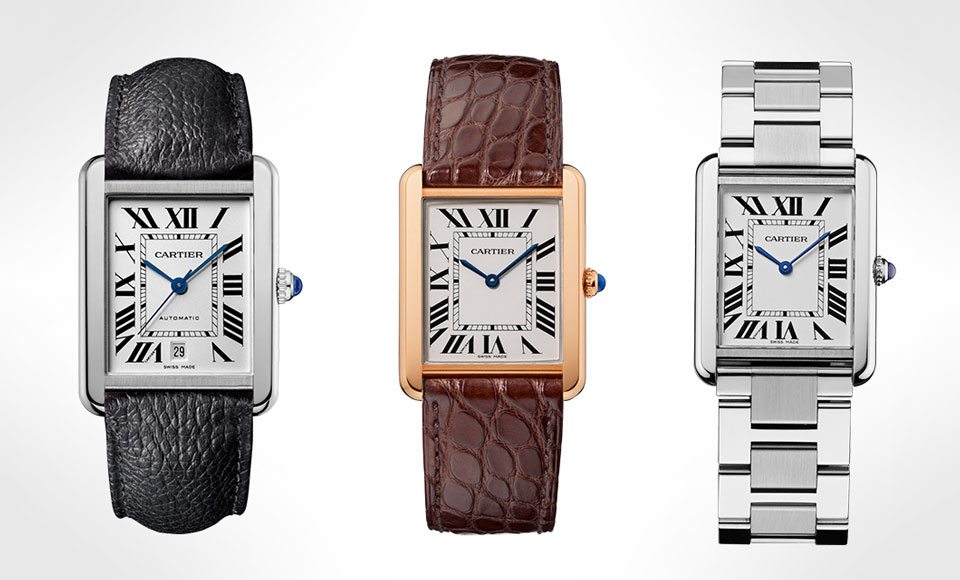 Coming in both quartz and self-winding mechanical movements, the Tank Solo range features Large (34.8 mm x 27.4 mm) and XL (31 mm x 40.85 mm) case models to suit the most discerning wearer . The Solo range affords a water resistant rating of 30 metres whilst its modest design allows it to incorporate steel and pink gold cases paired with leather or steel bracelets. 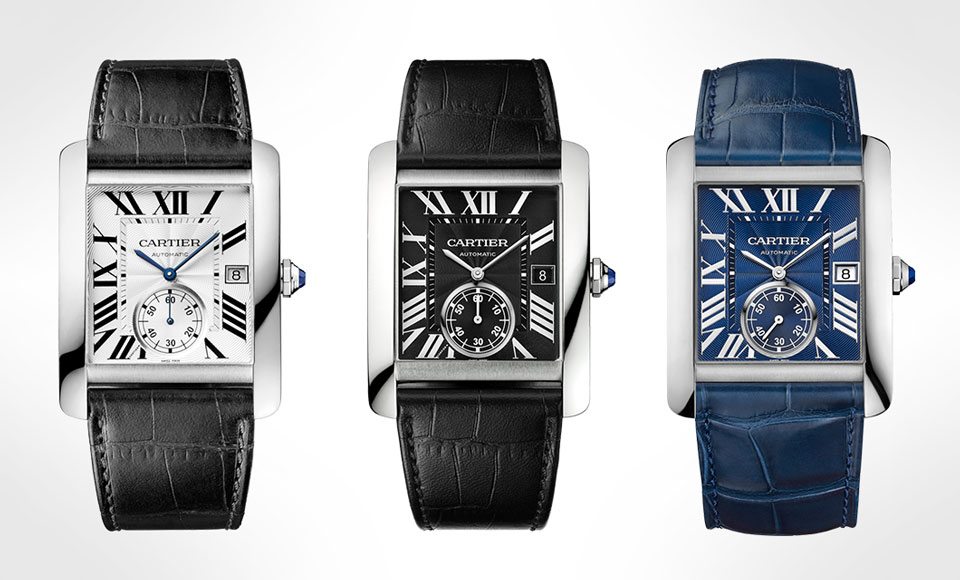 The pinnacle of masculine design from the house of Cartier is gifted to the Tank MC range. Design features of these models include a larger case, stronger square dimensions, a small seconds counter as well as intricate skeleton variations to make the Tank MC a true contender when it comes to standing out for the right reasons. The Tank MCs feature the 1904 MC automatic movement designed by the Cartier Manufacture and is entirely visible through the transparent sapphire case back. 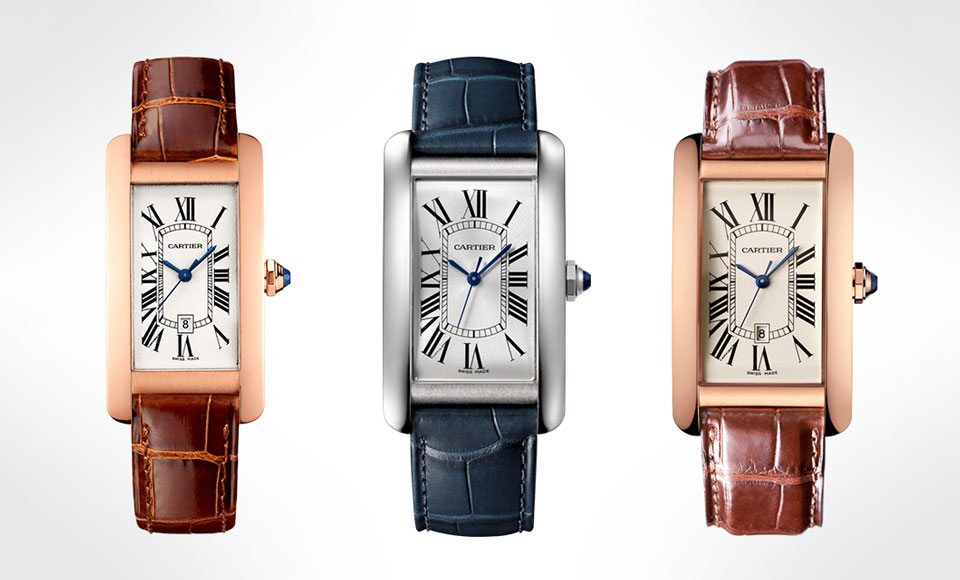 The Tank Americaine range is easily distinguished by its elongated case with a more pronounced curve than the original timepiece. More importantly it’s a step in the right direction as a playful update to the traditional dimensions, retaining its rectangular form whilst showing off its unique gradient case construction. All three models here feature mechanical self-winding movements and boast 30 metres of water resistance. 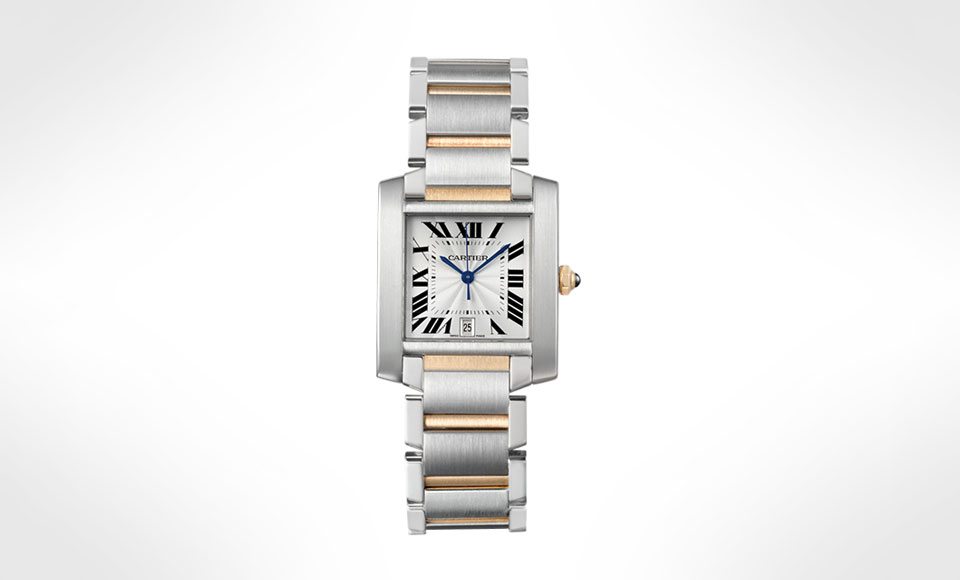 The Tank Francaise makes the 18K yellow gold/steel chain-link bracelet the standout feature here which is designed to complement the curved case. As a standalone model in the collection, Tank Francaise comes as a large model with a 36.5mm x 28.15mm steel case which houses a mechanical self-winding movement. It also carries a water-resistant rating of 30 metres. 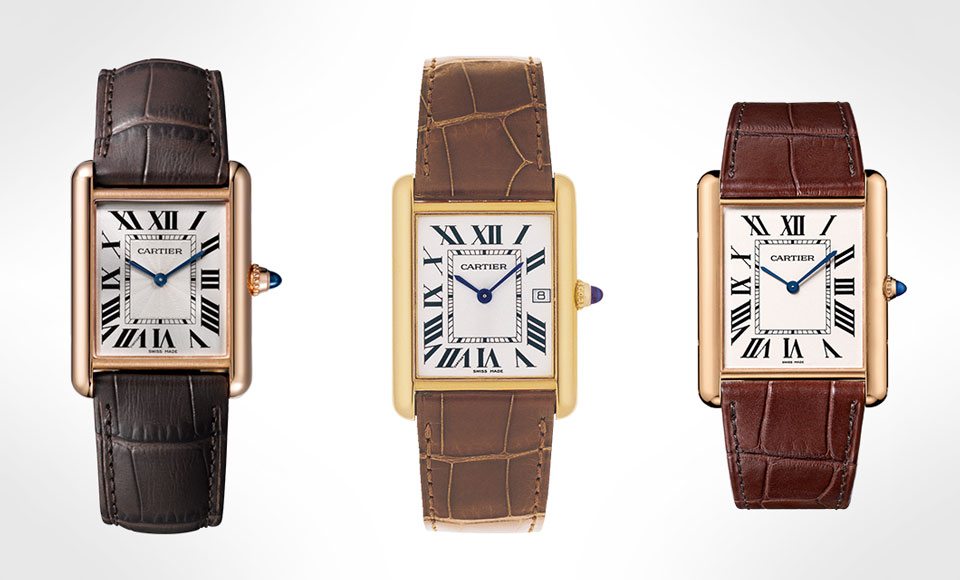 The Tank Louis Cartier is the model which faithfully recreates the timepiece worn by Louis Cartier himself. It differentiates itself from the other pieces in the Tank collection with rounded lugs, an aesthetic move which would later become known as Art Deco.

Movements in the Louis Cartier pieces include a quartz variant, a mechanical movement with manual winding and mechanical movement with self winding. Case dimensions for the Louis Cartier are set in 33.7 mm x 25.5 mm for the Large and 40.40 mm x 34.92 mm for the XL model. The two skeleton versions get their own dimensions with a 30 mm x 39.2 mm case made of either 18K pink gold or 18K white gold.

Water resistance is rated at 30 metres for the Tank Louis Cartier collection. 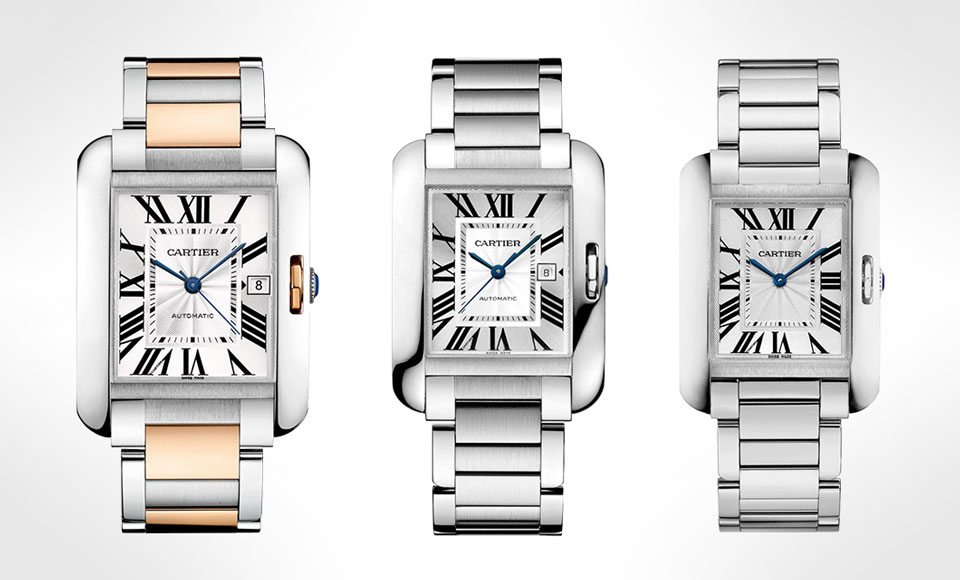 Rounding out the Tank de Cartier collection is the Tank Anglaise, a variation of the original design which seamlessly incorporates a winding mechanism into the case alongside bolder lines and the option of smaller cases.

Movements in this model range from the quartz through to the mechanical self-winding. There are eleven individual styles to choose from in the Tank Anglaise with combinations including pink gold, steel, yellow gold and two range-topping diamond variants. All models in the Tank Anglaise range come with a 30 metre water resistance rating.