Meet The Man Who Makes Over $100,000 From Playing With LEGO Everyday 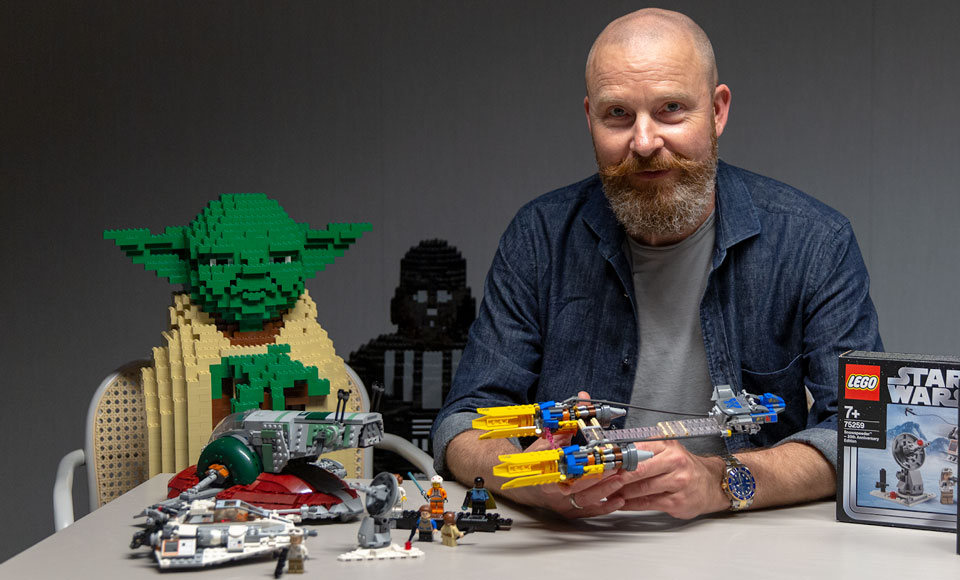 Most encounters with LEGO are a fleeting moment that lasts between the ages of 3 to 12 (15 if you’re cool like us). For Jens Kronvold Frederiksen, that love affair lasted a lifetime and has seen him rise to the top as the Creative Director of LEGO’s iconic Star Wars line. Whilst this year marks the 20th anniversary of that toy line, it also marks the 21st work anniversary of Frederiksen at LEGO – arguably the happiest place to work in the world.

We wanted to find out for sure so we asked him what the $100,000-plus job entails and whether it really is all just plastic and games.

Scoring A Job At LEGO

Frederiksen admits that his job offer came as an accident rather than him actively seeking it. With his professional background in graphics, Frederiksen was just a guy who built WWII plastic model kits and played with LEGO in his spare time.

“I was at an exhibition where I had my models and there were some LEGO people there and they were looking into hiring designers and they asked me. It was a coincidence,” he says. Today the job recruitment process is very different.

“A lot of LEGO designer applicants go through a lot of interviews and some selected people get different workshops for different tasks, like things they have to build for instance.”

According to Frederiksen, the skills you need to be a successful LEGO designer are simple and not unlike regular jobs that require specific skills:

Frederiksen notes that passion is the most valuable trait to get LEGO hopefuls over the line. He recommends joining communities and events in order to meet the right people.

According to estimates from Glassdoor, Frederiksen’s role can attract an annual salary of anywhere between AU$90,000 to $162,000. That’s serious coin for 9 to 5 job designing toys but Frederiksen assures us that there’s much more to it.

“I’ve worked on the same product line for a very long time in my career – for 21 years now. I started with Star Wars right from the beginning and I’m still super passionate about it.”

“People move around a lot in the company. It’s very unusual for one person to work on the same product line for so long but for me it’s been great because I love it. It’s gotten bigger over the years with new movies and new ideas that make it more interesting.”

“Work hours we work a lot,” adds Frederiksen. The bulk of these hours are spent in big teams in open office environments. Designers, engineers, product leaders, the marketing team and even the people developing the building instructions all stand together, so there’s rarely ever solitary work.

“For the whole process it’s super beneficial but also a lot of fun being able to sit together. We work a lot and it’s a demanding job but it’s fun and we have a lot of travelling so that’s a good part of it.”

Stressful Aspects Of The ‘Dream Job’

With great fun comes great stress but Frederiksen says most of the time you forget because it’s so darn enjoyable.

“I would say for our Star Wars product line which is an intellectual property part line, one of our challenges is to get references when new movies come out.”

“We are developing our moulds at the same time the movie is being made and Lucasfilm really do their best to supply us with immediate reference, but sometimes there’s really late changes in the movie and this impacts what we’re doing so I would say that’s the most challenging part of the job.”

The proudest moment of being a  LEGO designer, according to Frederiksen, is seeing your final product for the first time on toy shelves.

Does One Get Bored Of Building LEGO Everyday?

“No,” answers a defiant Frederiksen. Most people struggle to stay in a company for two years let alone two decades but for this man, it’s all about the journey. Frederiksen now commands a team of model designers and he only needs to build LEGO when the product is complete as part of quality control.

“It’s a lot of models but I still love that part of the process…to see them built,” he says.