The hunt for Red October.

It’s certainly one of the most exhilarating ways to welcome the 2020 BMW X3 M Competition onto Australian shores, but we couldn’t imagine a better solution to testing a practical German SUV re-calibrated to deliver maximum driving pleasure.

And whilst practicality is still at the heart of this car, we’ll be the first to admit that you might forget about it once you mash that pedal in a self-induced slide.

With Australia’s first ever M Town playing backdrop — a safe haven for motorsport enthusiasts to stretch their legs and test their car control ability — it was one of the most enticing ways to celebrate our final outing here at D’Marge.

Retired rally ace Cody Crocker as our driving instructor? Check. 16.5km of track in the dusty clay pans of the Australian desert? Check. It was time to determine whether BMW’s latest flagship SUV is really worth the hype.

1. It’s a tad ballistic for an SUV…and that’s why you’ll love it. 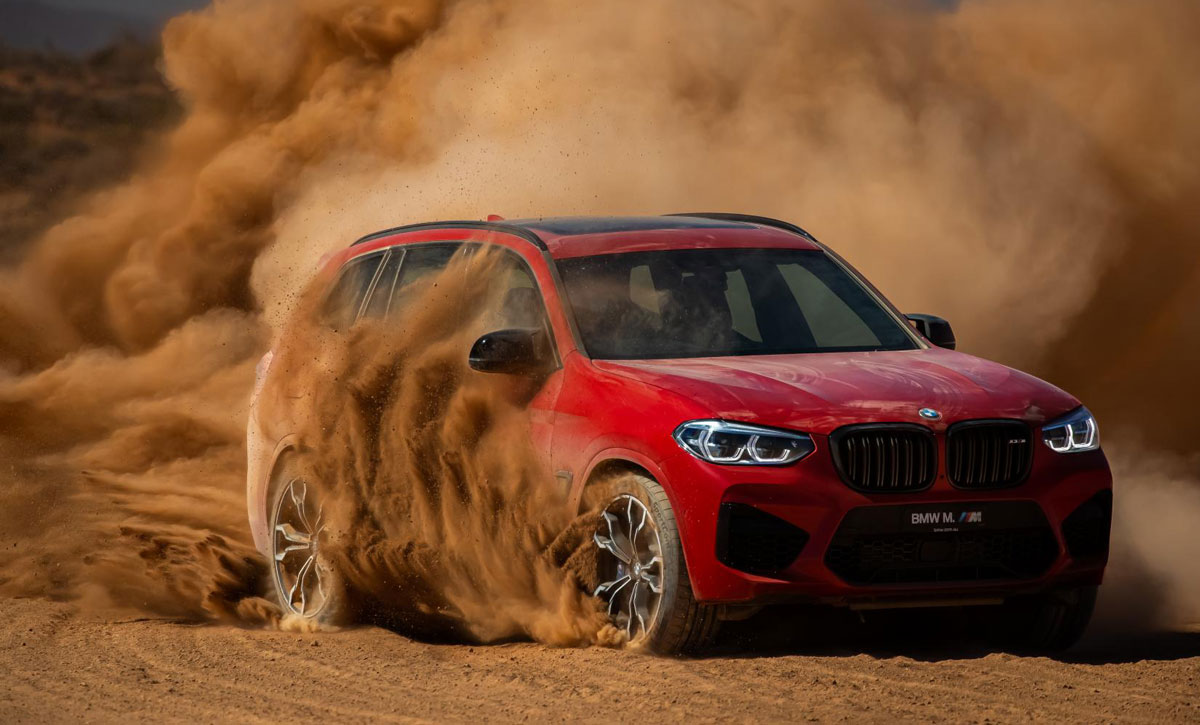 The spec sheet alone doesn’t do the X3 M Competition any justice. In a red dusty playground where your inner-racer does the talking, the car absolutely shines and you can feel exactly what it’s doing even going sideways at 80km/h. 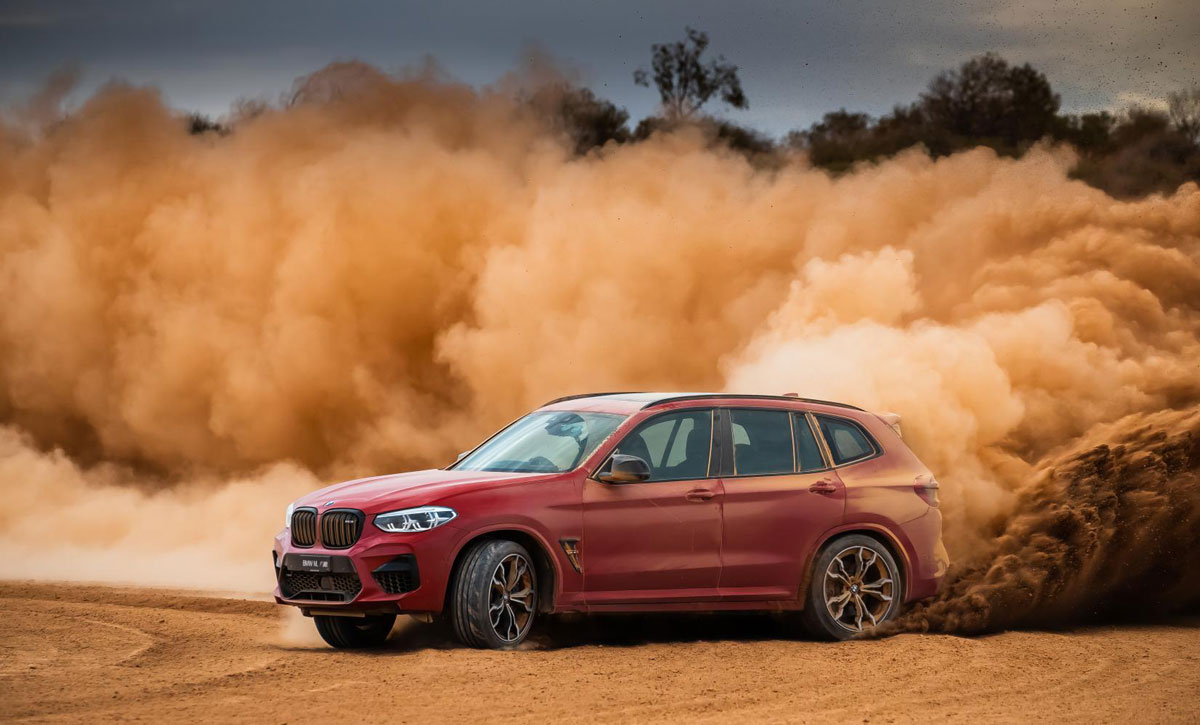 2. And that’s all thanks to this beast… 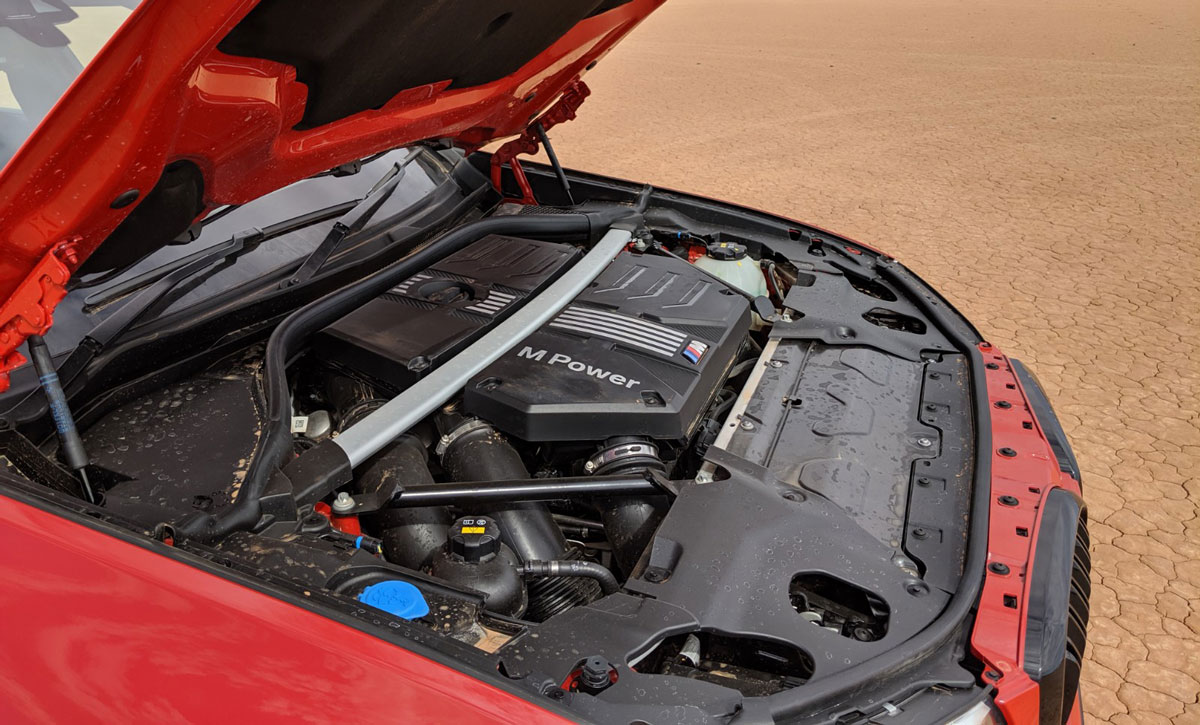 BMW M have tuned the 3.0-litre engine to deliver big power and torque all the way up to 7,200rpm. Utilising 90% new engine componentry also means that the SUV now behaves more like a race car with the push of a few buttons. One downside on our tested model was the absence of BMW M’s signature carbon strut, a beautiful optional extra that would have polished this engine bay off nicely. 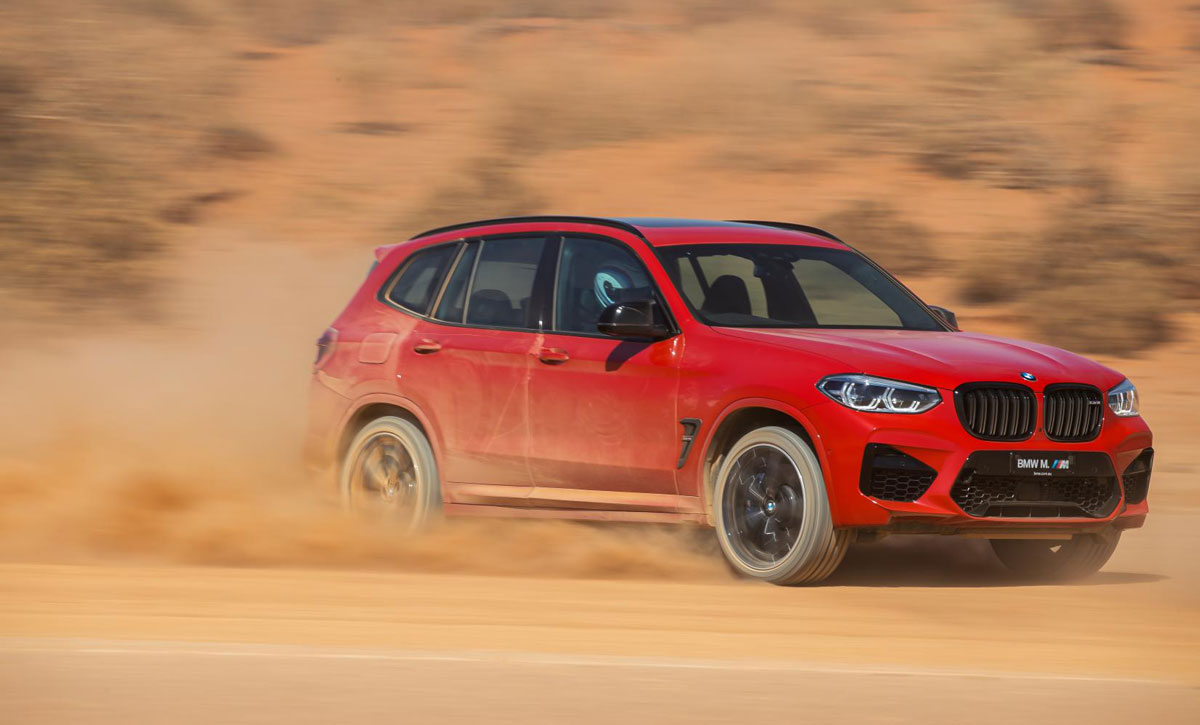 Mash that pedal and you’ll soon be seeing triple digits quicker than you can say “isn’t this car meant to weigh two-tonnes?” 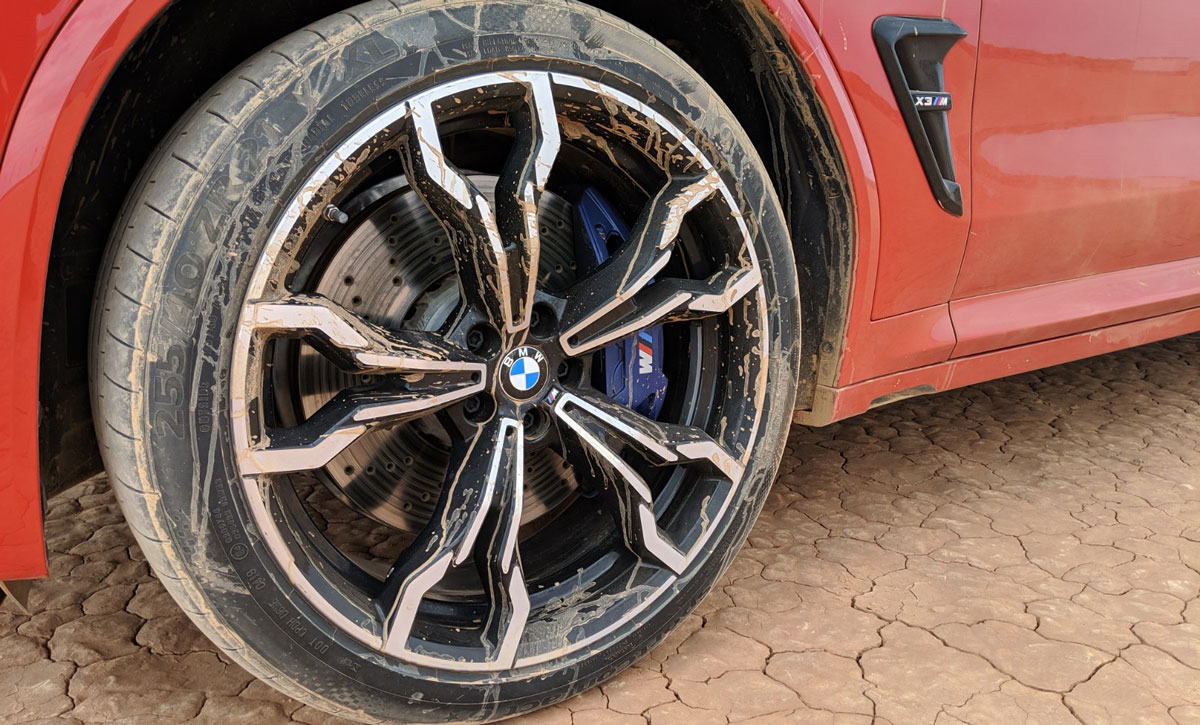 BMW haven’t forgotten about the basics in pursuit of numbers. The front brakes employ decent four pot callipers mated to large 395mm drilled rotors. In the dust the brakes clamp down strong with the help of ABS but loose clay means you’re still sliding past target stop points slightly. Nonetheless speed is washed off quickly and in the real world this should be a very capable setup when paired to the equally capable Continental Sportcontact 6 tyres.

5. It’s dirty on the outside, composed and classy on the inside. 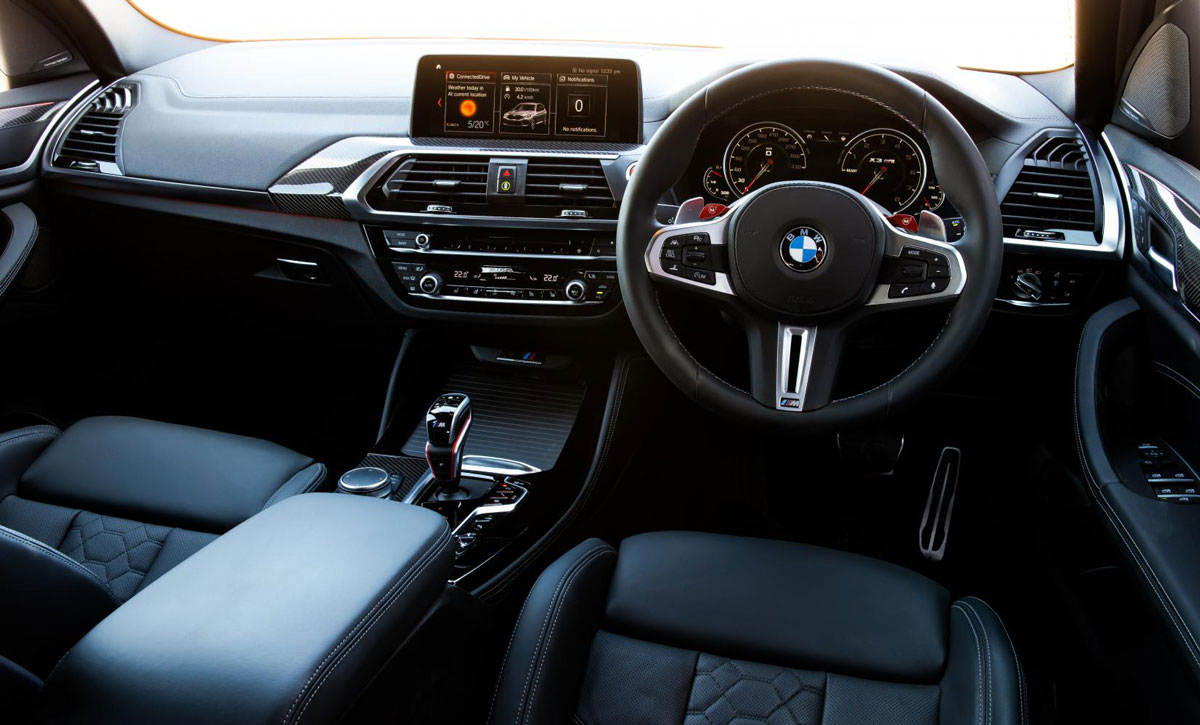 In true BMW fashion the interior is finely executed with plenty of soft leather with contrast stitching, real carbon fibre accents and fancy tech including wireless phone charging and a new Head Up Display (HUD) navigation feature. There’s also personalised driver mode buttons on the steering wheel so switching between comfort and race is seamless.

6. Textures and details will make you feel a bit more special. 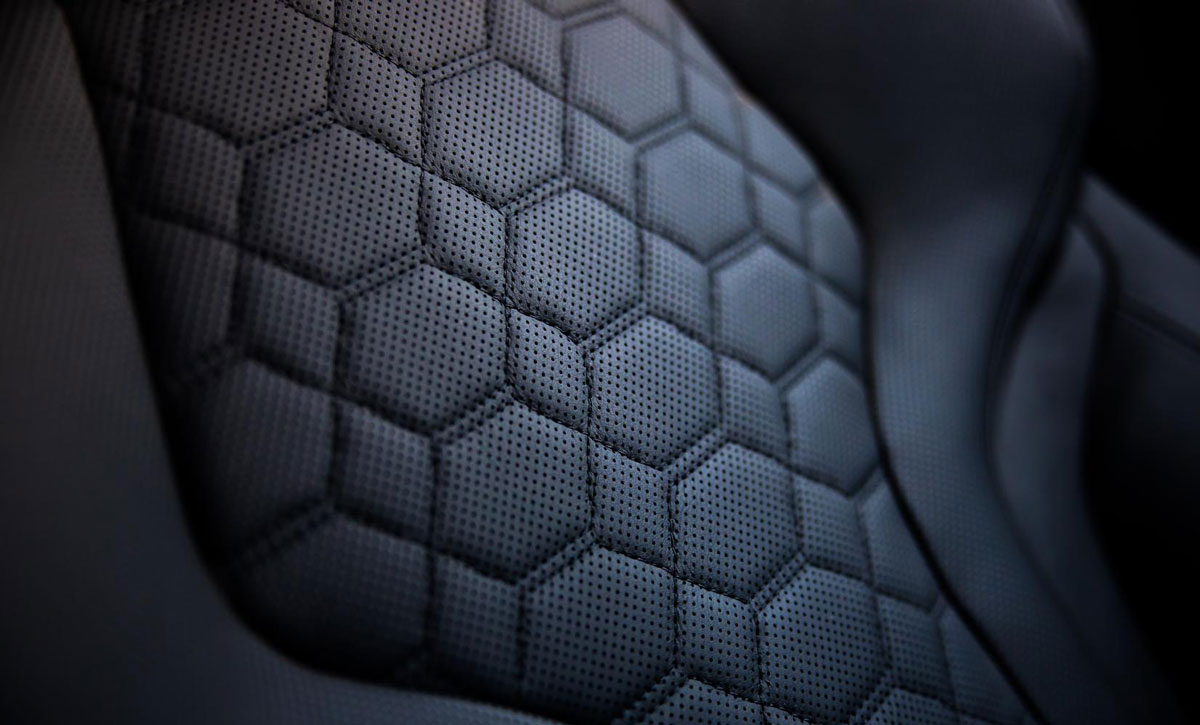 There’s M logos on the front headrests which illuminate and fancy hexagonal stitching in the mid supports to remind you this is no average X3. 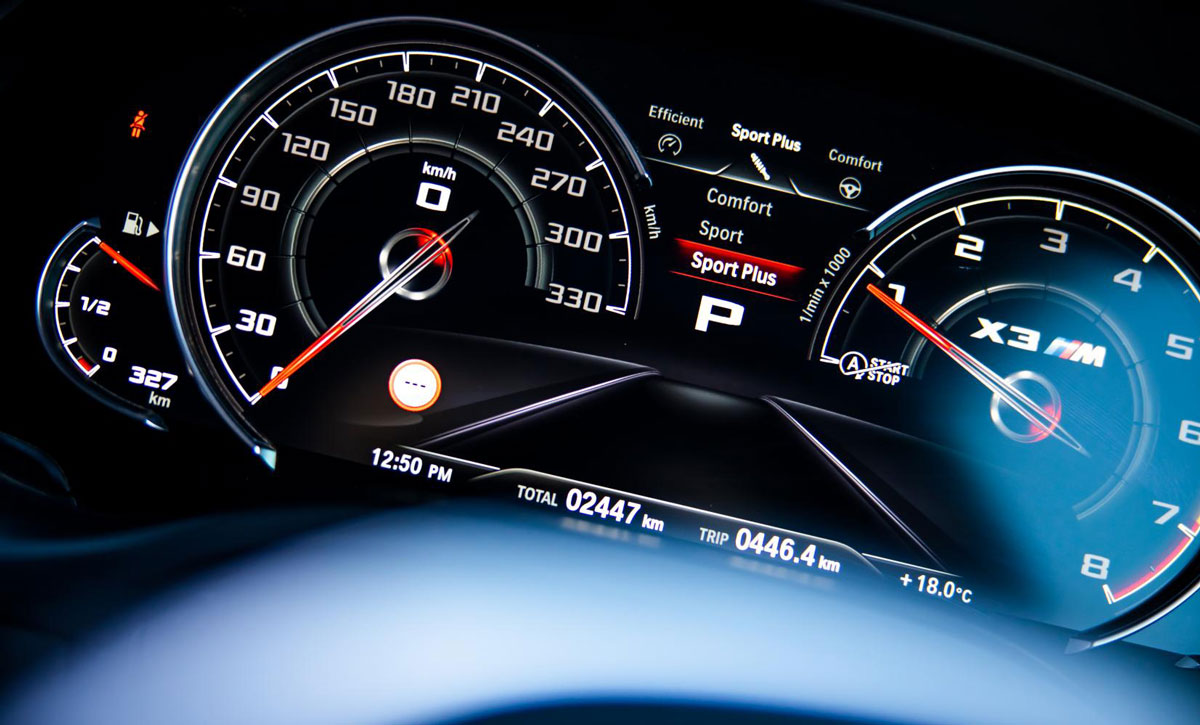 We’re personally still impartial to digital clusters — just think about what happens to your television screen after a decade of viewing. How much will it cost to replace? Who knows. Besides longevity and potential for dead pixels, the clarity and info delivery on this thing is second to none. 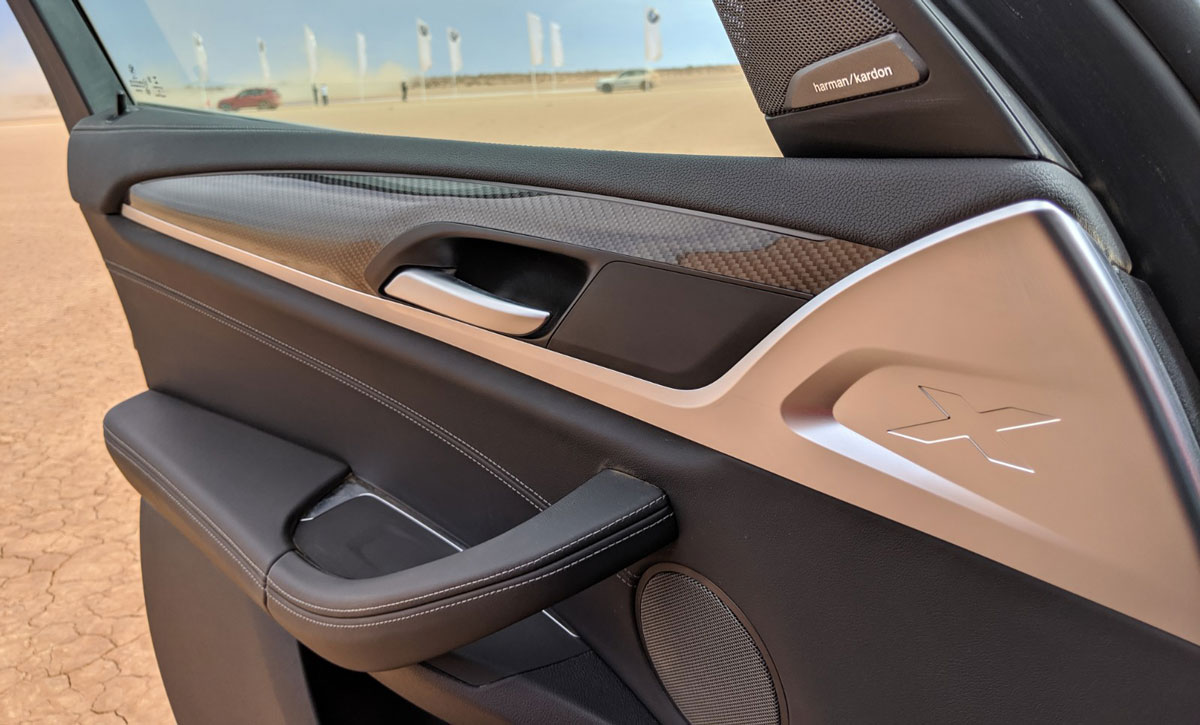 If it’s anything like the Harmon Kardon system we experienced in the new X7 then it’s very capable on long haul drives. In our X3 M experience we muted it in favour of the sound of the 3.0-litre twin turbo and sand spraying the side panels. 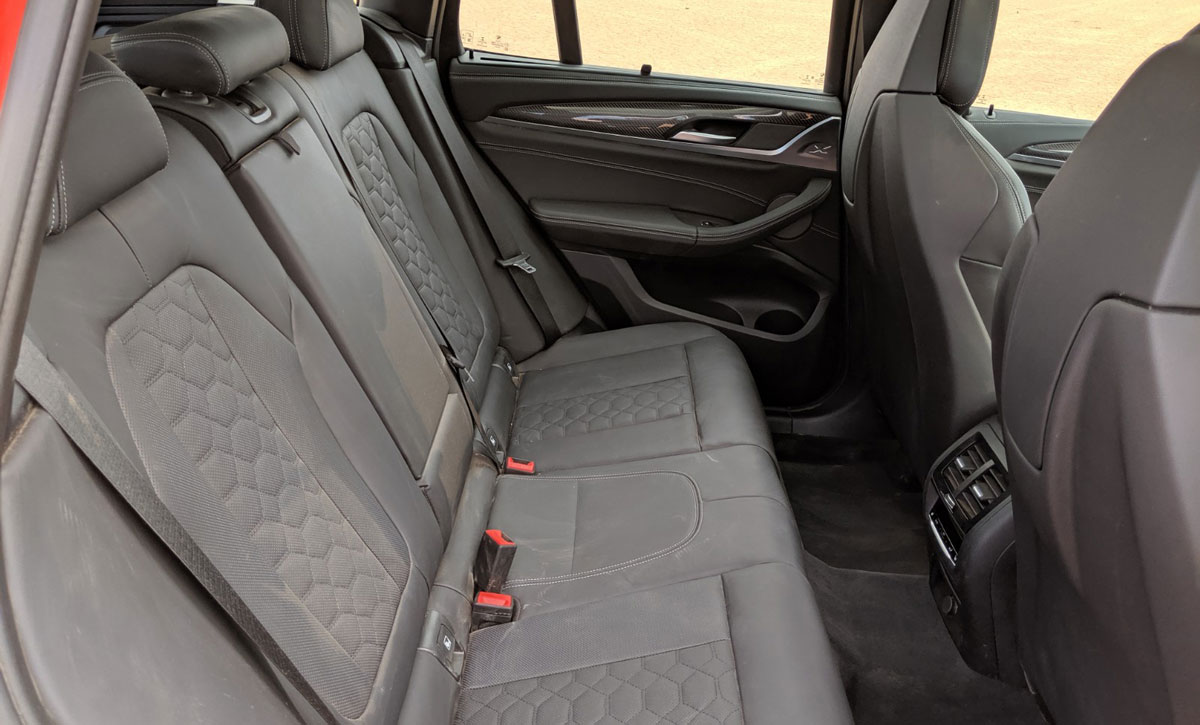 You’ll have no issues stuffing the kids or three  grown adults in the back. Cleaning out the red dust we can’t help you with. 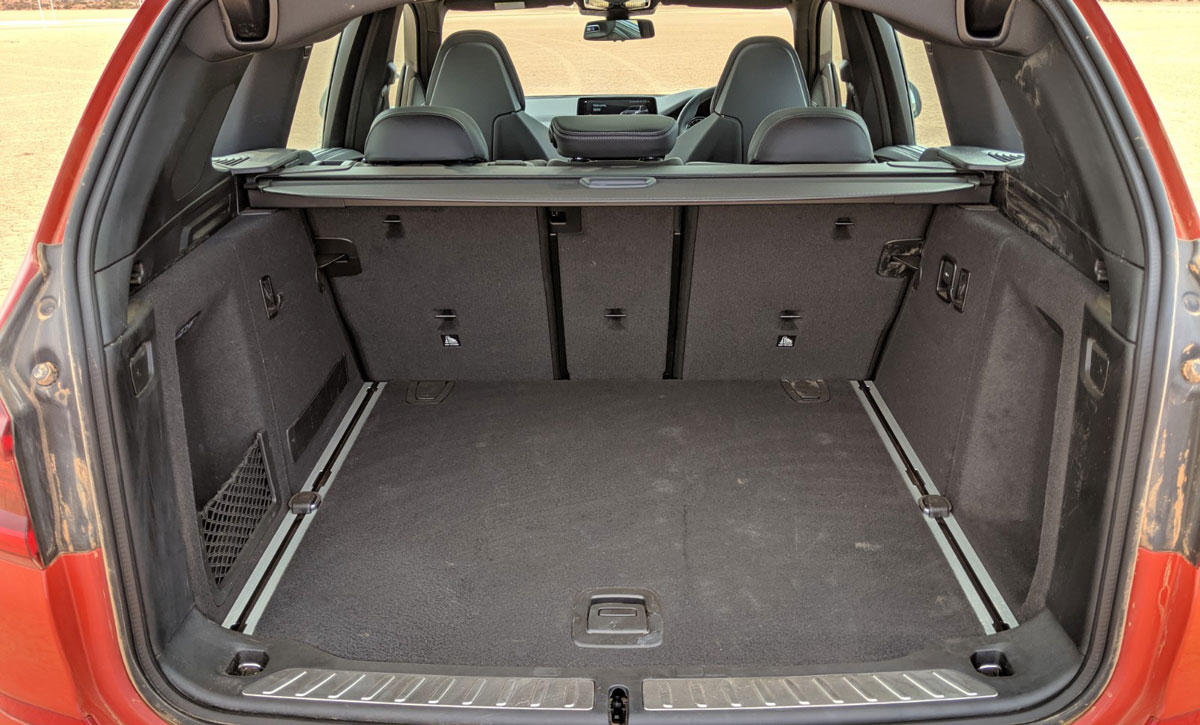 Ample boot space means practicality isn’t sacrificed in favour of speed and the car is still fully usable as a traditional SUV. 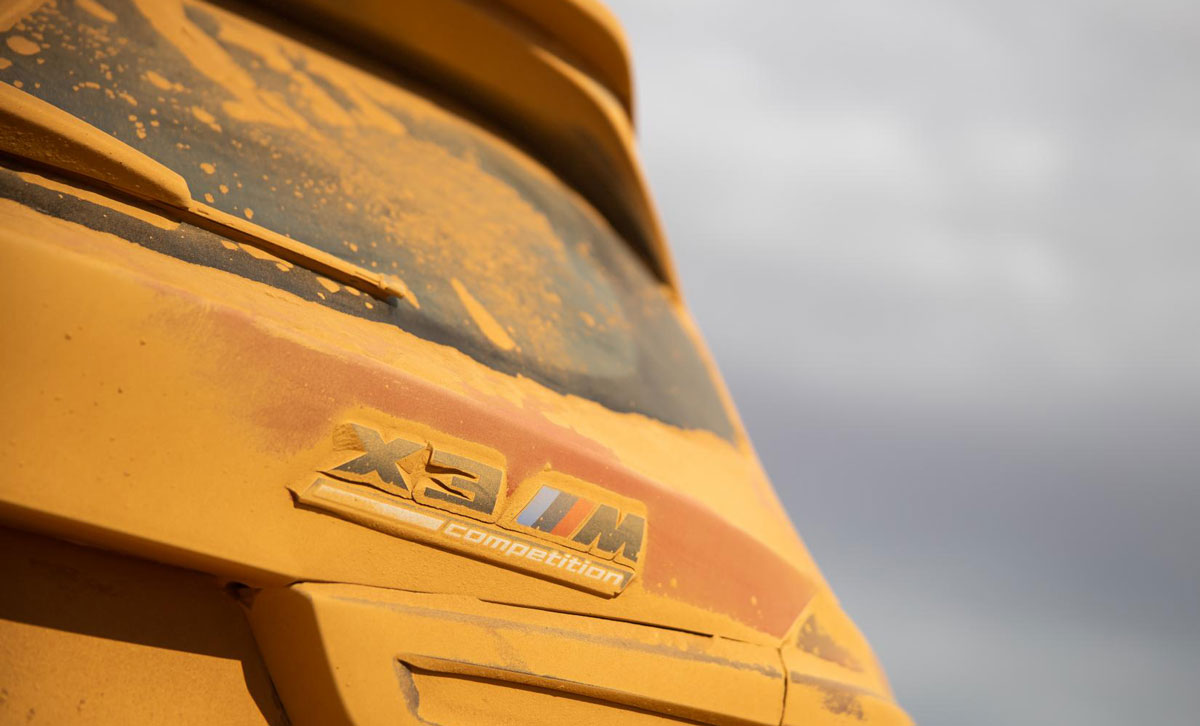 From touches out back…

12. To when the car first greets you… 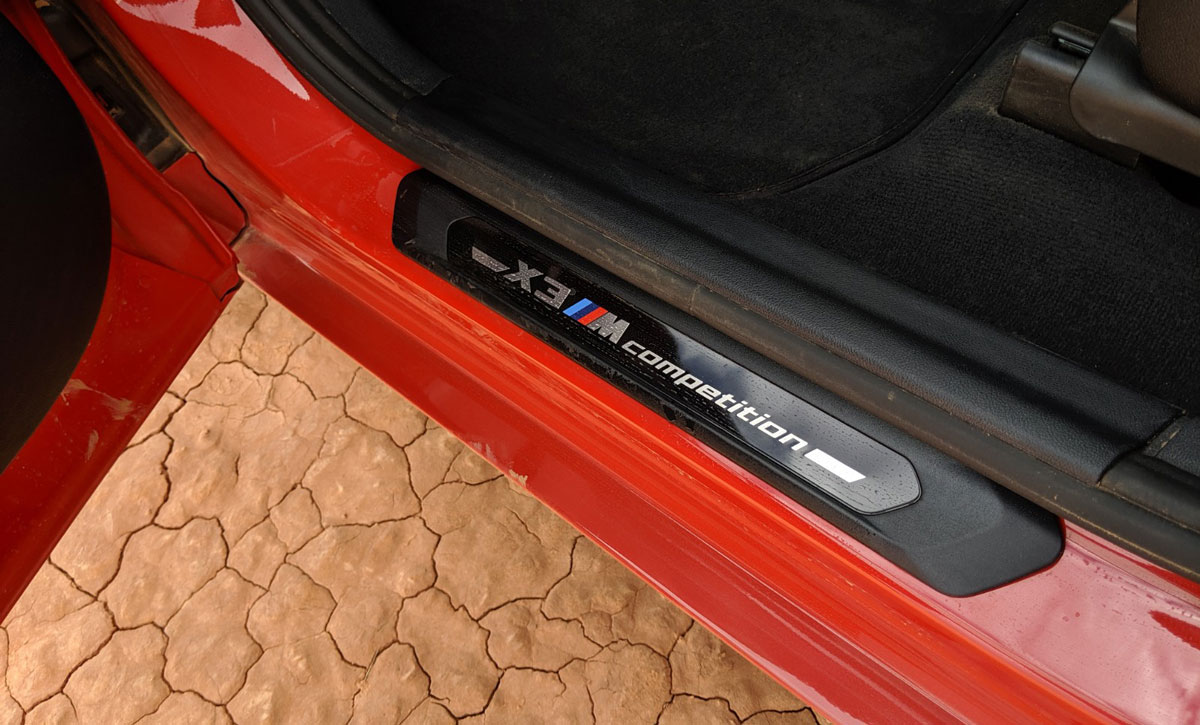 With side sill insignia… 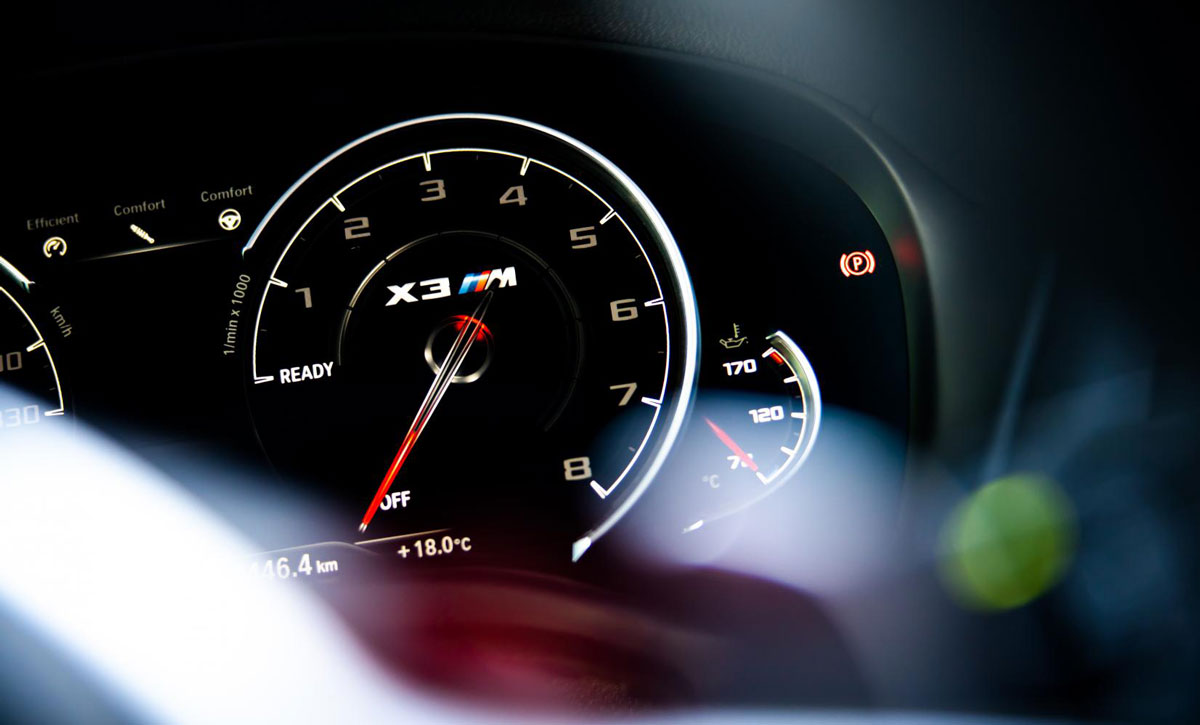 In the digital cluster tacho… 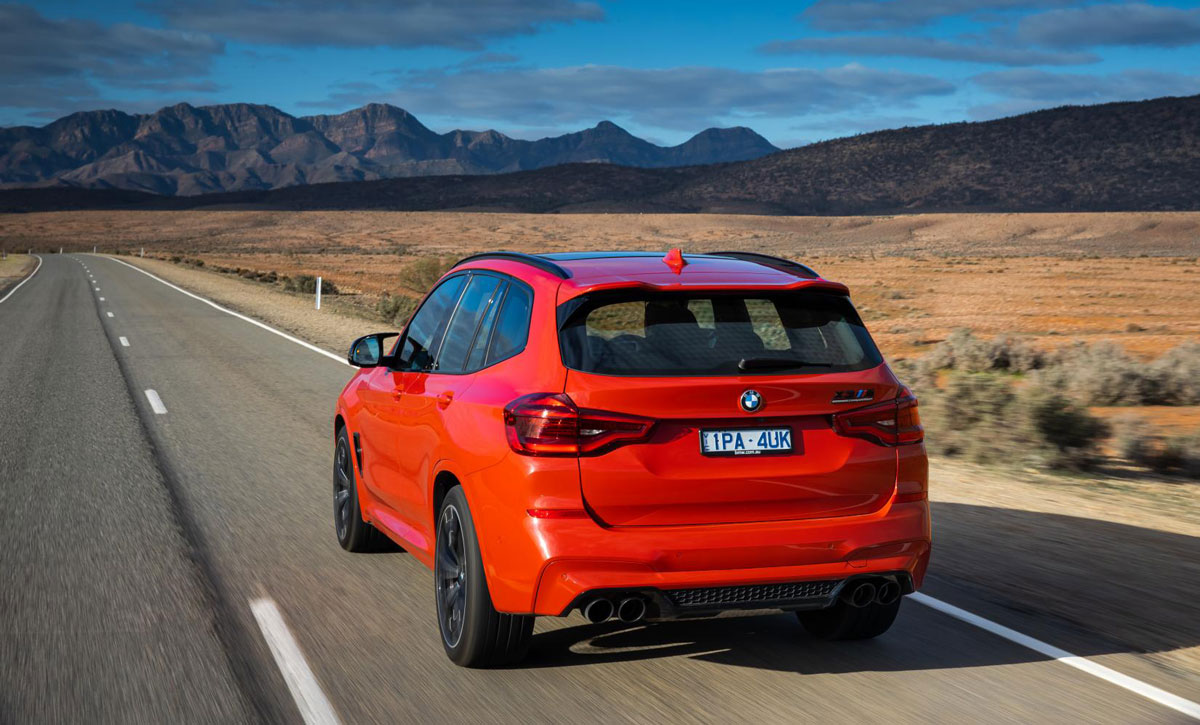 A quad exhaust which looks as good as it sounds.

15. There’s even aero mirrors as found on all modern BMW M cars. 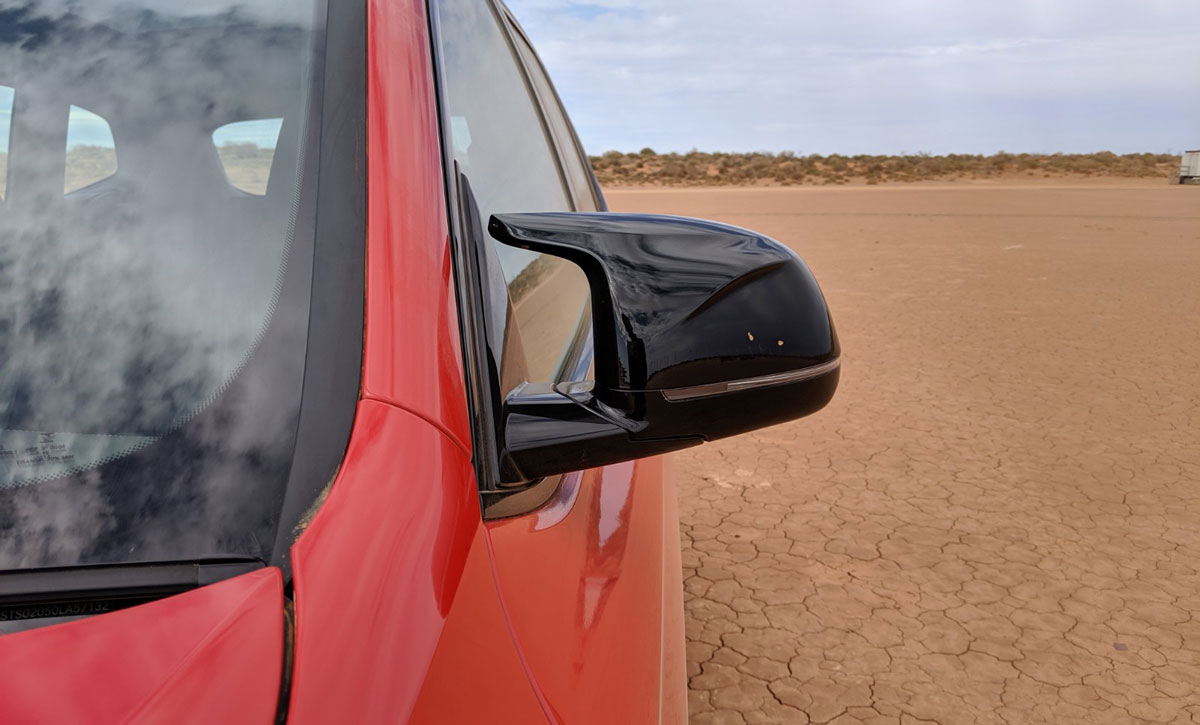 If you know, you know.

16. Latest Adaptive LED headlights will light the way for you home. 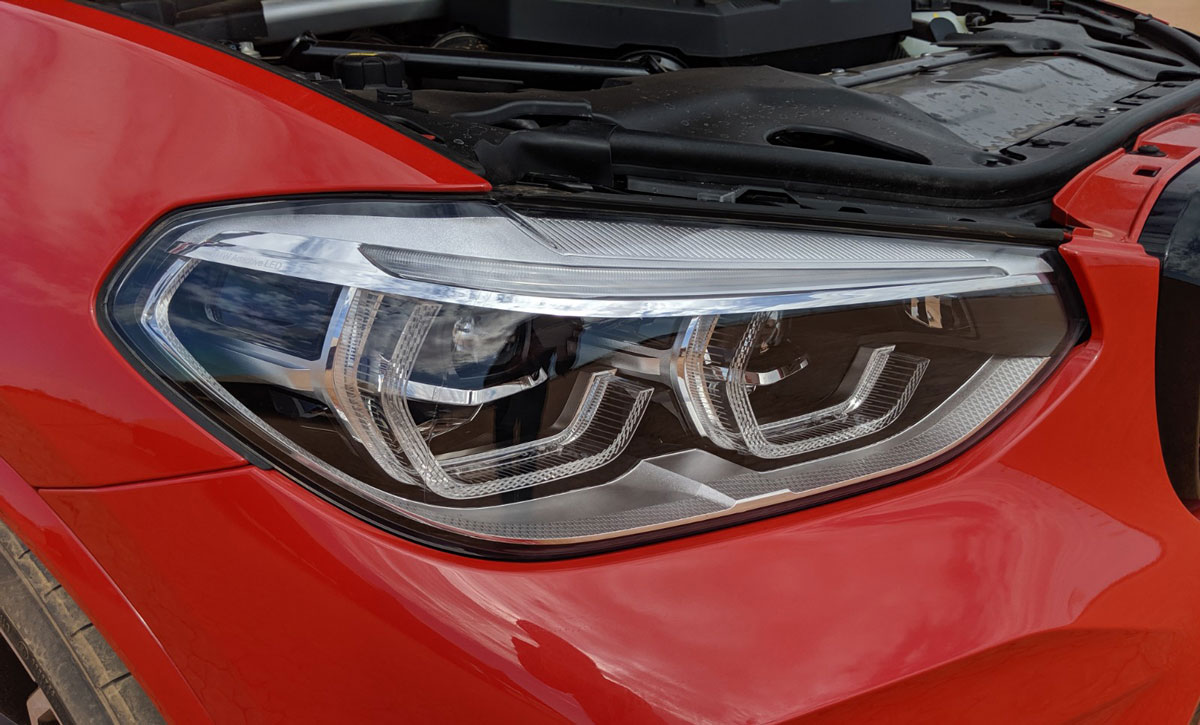 This is safety gear as standard in the X3 M Competition alongside six airbags, autonomous emergency braking and the latest in driver assistance programs designed to keep you safe in traffic. 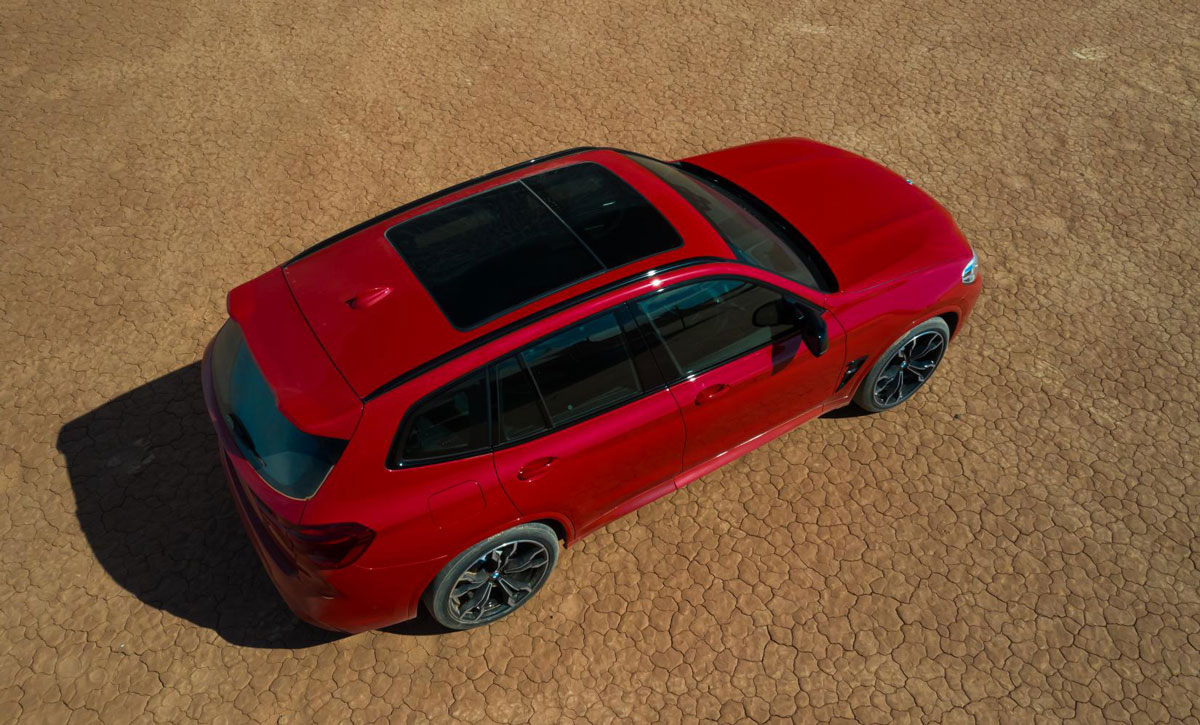 A sunroof usually takes away rigidity from a car’s body and hence its handling dynamics. Tick the sunroof box on the X3 M and you won’t lose out thanks to the additional A-frame brace at the rear to counteract this. 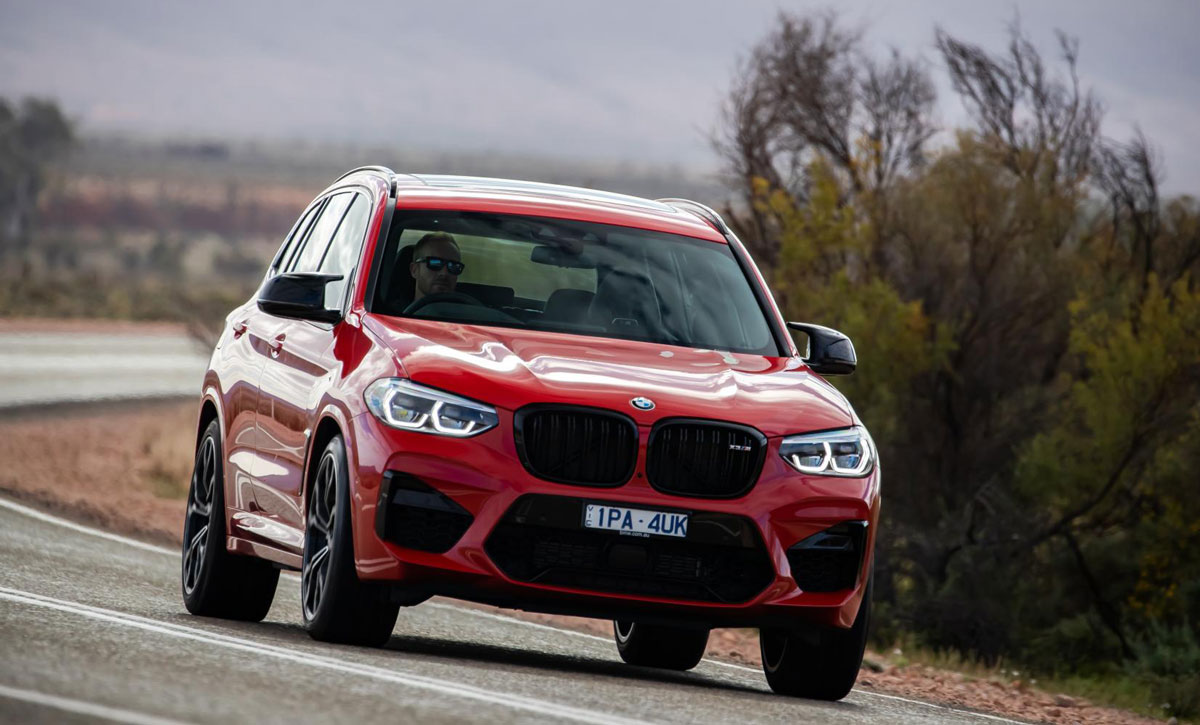 We didn’t get to test it on normal roads for compliancy amongst civilians. The car comes equipped with adaptive suspension for Comfort, Sport and Sport+ modes so this should alleviate some worries. There’s also a normal 4WD and Sport 4WD mode that sends more torque to the rear wheels for spirited drives. Those towing heavy loads will also appreciate BMW’s 3,500kg towing capacity as a factory option.

19. Performance and practicality in a tight little package. 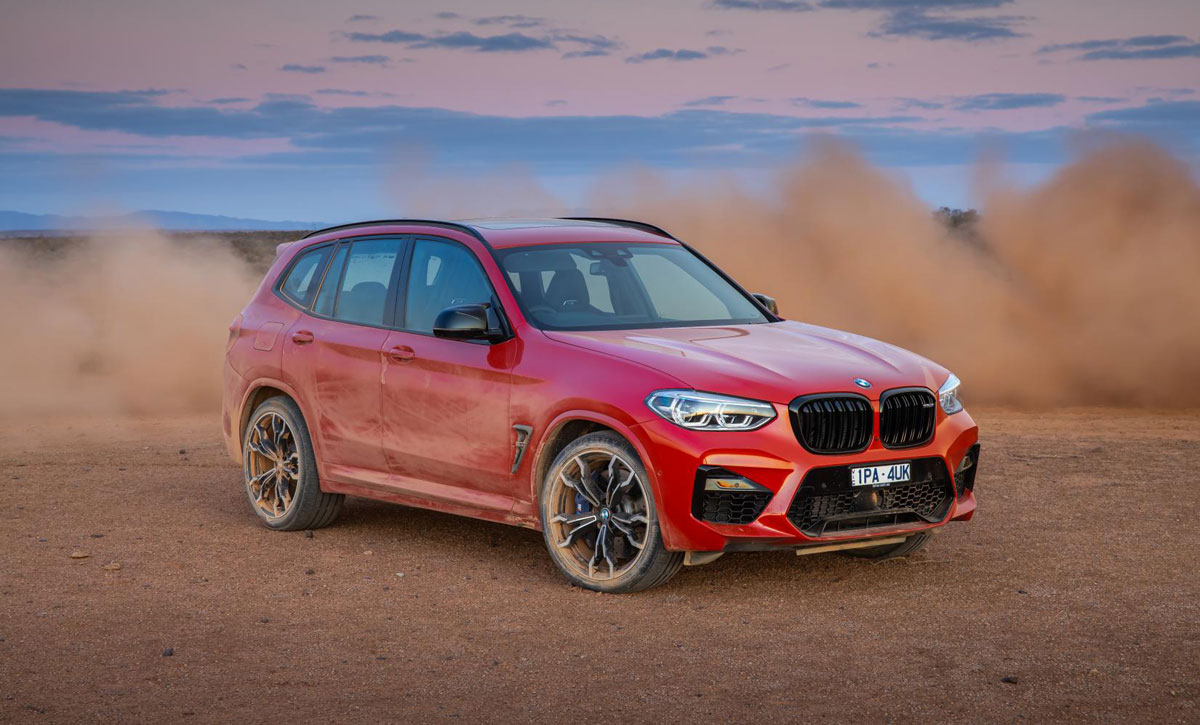 If you’ve got a spare $160,000 to drop on a hot SUV then the X3 M Competition should be at the top of your list. It builds upon a very reputable ‘X’ platform which was first introduced in 2003 and has sold roughly 132,000 units since its debut. It’s safe to assume that German performance now comes with practicality. The hard part is convincing the better half.