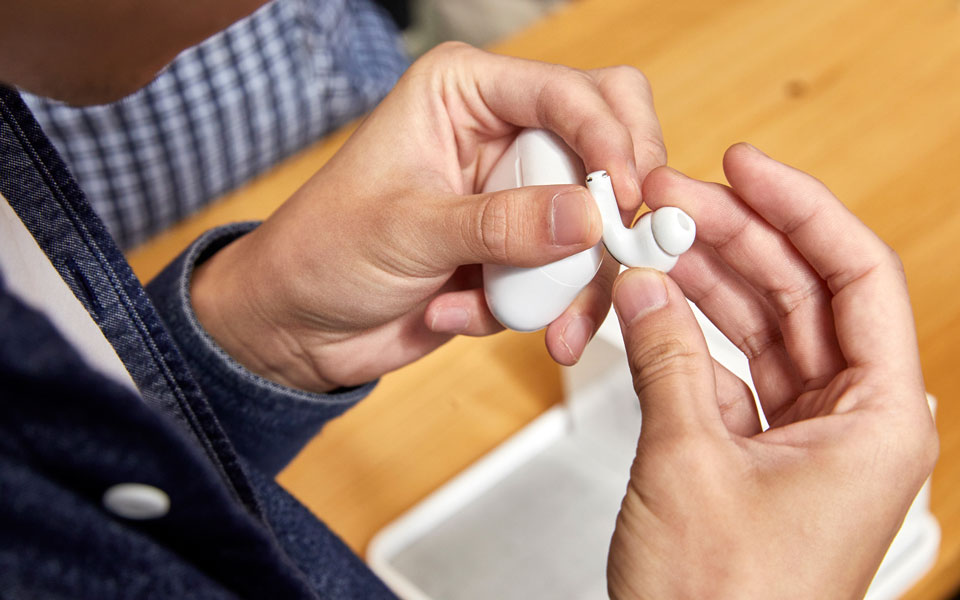 The Apple AirPods have divided opinion ever since they were first launched in 2016: Tiny walrus tusks sticking out your ears was the observation of many. However, they were Apple’s answer to a burgeoning headphone trend: wire-free headphones.

The idea of wireless headphones was met with some speculation when it became a mainstream topic following the release of Apple’s in-ear sticks, but in just three years has become one of most valuable sectors within the wearables industry, with sales standing at around 120 million units as of this year. Apple holds a 50 percent share of those sales, so who’s laughing now, really?

Since the inception of the AirPods, the iconic white buds have undergone a few changes, with the AirPods Pro being released earlier this year. But with Apple products come a wave of accessories, some useful, some not, or, in the case of this latest one, baffling.

That’s because US retailer Nordstrom has started selling a cord that attaches to either end of the AirPods to prevent users from losing their little buds. What’s more, the rather basic product is selling for AU$92 (US$60). Not exactly cheap for a piece of string.

But it begs the question “why has this been made in the first place?.” The amusing thing about the release of the Nordstrom cable is the backlash it has received from the Twitterati, with several users mocking the cable for its redundant nature.

Scared of losing your AirPods? Try this! A cord that holds your AirPods on a strap around your neck just like — wait a minute… https://t.co/TWtI2d5ixv

Or is it completely pointless? The whole point of wire-free headphones is that they have no cords or wires. This leaves them susceptible to being separated and lost from one another when they’re not in the case – something even we here at D’Marge Towers have experienced.

We’re confident we’re not alone in that regard, and while it’s easy to take the piss out of a product that could be seen as useless, it’s only been created to solve an embarrassing problem: people losing their AirPods. If you don’t want to lose your headphones, don’t buy a pair without a wire – a point made in reply to one of the product-shaming tweets:

All up, the embarrassing truth about 2019’s ‘coolest’ (or at least, as sales show, most popular) new gadget is not that the technology is flawed, but the way we store (read: leave lying around) it is. In other words: this ’embarrassing truth,’ for once, reflects badly on consumers, not the creators.

If we had to pick one issue with the Nordstrom cable though, it would be the price. The company isn’t alone in selling a cable to attach to the AirPods, but it is one charging a hell of a lot of money for one. You can pick up a Spigen cable for example for US$10. But if there’s one thing retailers know when it comes to Apple-related products, is that fanbois will pay top dollar for all manner of iAccesories.

Capitalism at its finest.