“Consider that one A380 engine is worth about $US25 million – so maintaining them is critical.”

With lockdown laws in place around the country, you’ve probably found yourself stuck inside for more consecutive days than you’d like. Especially from March to April, before restrictions began easing, we imagine you wouldn’t have used your car so much and we’re even more sure, in that time, you wouldn’t have thought to wash it or carry out any general maintenance.

The same can’t be said for airlines. Qantas, like many other carriers, currently has a whole fleet of aircraft sitting at airports around the country, praying for the day their doors can be opened to 2019-like stampedes of passengers, countless crying babies and fly-flat fanbois. 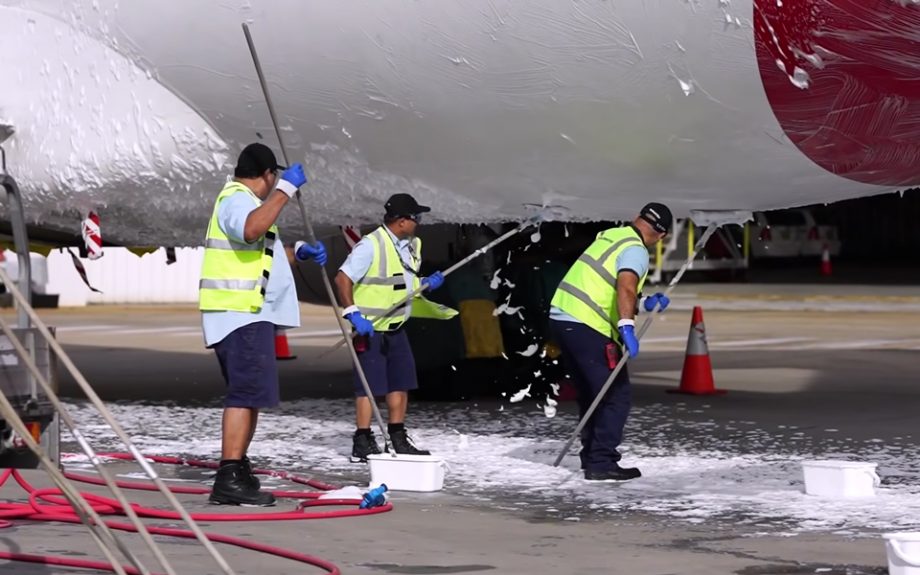 Get in there nice and deep, lads

But until such a day comes when domestic and international flights can resume as normal, many of Qantas’ aircraft still need to be looked after to ensure they’ll be ready to fly when the announcement is made. But just how do you go about looking after several hundred, 500-tonne flying machines?

Australia’s flagship carrier has revealed all in a recent blog post, accompanied by images from Jetstar’s Senior Operations Controller, Chung Chieh Choo. The post explains that before any general maintenance occurs on its fleet and “TLC” is carried out, the entire interior is given a seriously deep clean using a high-grade disinfectant. They wouldn’t want to be responsible for a second outbreak of the virus, after all.

The outside of the planes are given a wash too.

So far so standard. But here is where, for you AV geeks, things get a little more interesting: as Qantas’ Head of Maintenance John Walker explains, the tyres need to be rotated regularly too – every seven to 14 days to be precise – to ensure they don’t succumb to any flat spots that would force them to be changed.

To do this, the planes can either be given a leisurely drive around the airport parking lot, or they’re hoisted up on what we assume to be extremely heavy-duty joists.

Then, crucially, there are the engines, which need to be well looked after all year round. This includes being fired up every seven to 14 days (watch the Qantas engineers do that here) and having silicone sachets inserted to absorb any moisture.

As Qantas recently announced: “To keep the inside of the engine moisture-free, giant versions of the silica moisture absorption sachets are inserted. One A380 requires over a hundred kilos of these moisture absorbers to maintain humidity levels in the cabin and engines.”

“Consider that one A380 engine is worth about $US25 million – so maintaining them is critical.”

When they’re not being fired up, they need to be tucked in for sleep and staff have to make sure all areas susceptible to interference – including ventilation holes near the fuel tanks and sensors on the front of the aircraft – from either nesting birds, insects or dust, are kept well-protected.

John explains the Dash 8, the propeller-powered plane used for more regional flights – and recently some flights from Sydney to Melbourne – has a foil placed over the windscreen to help protect the cockpit from the sun.

This all comes in a context where, as one Qantas pilot recently told DMARGE, Qantas is “speeding up the retirement of its remaining 747s (which operate between Sydney, Los Angeles, New York and Brisbane) but is waiting to see what comes of the rest of the international fleet” before making any long term decisions.

“Qantas have said they can weather the storm for a year, but I suspect some significant fleet decisions will be made before we reach that point.”

Only time (and passport stamps) will tell exactly when those “significant fleet decisions” will have to be made. But in a context where airlines world-over are scrambling to relocate their jets (particularly the larger ones) to desert hotspots like Alice Springs and Arizona (to better maintain them and to avoid paying the $400 an hour some large airports charge for plane storage), finding a buyer for your jet, in the coming years, may feel a little like trying to find someone to rent your overpriced Surry Hills apartment.