80s Alfa Romeo GTV6 From ‘Octopussy’ Up For Sale In Melbourne

The vehicular vermouth in Bond’s martini. 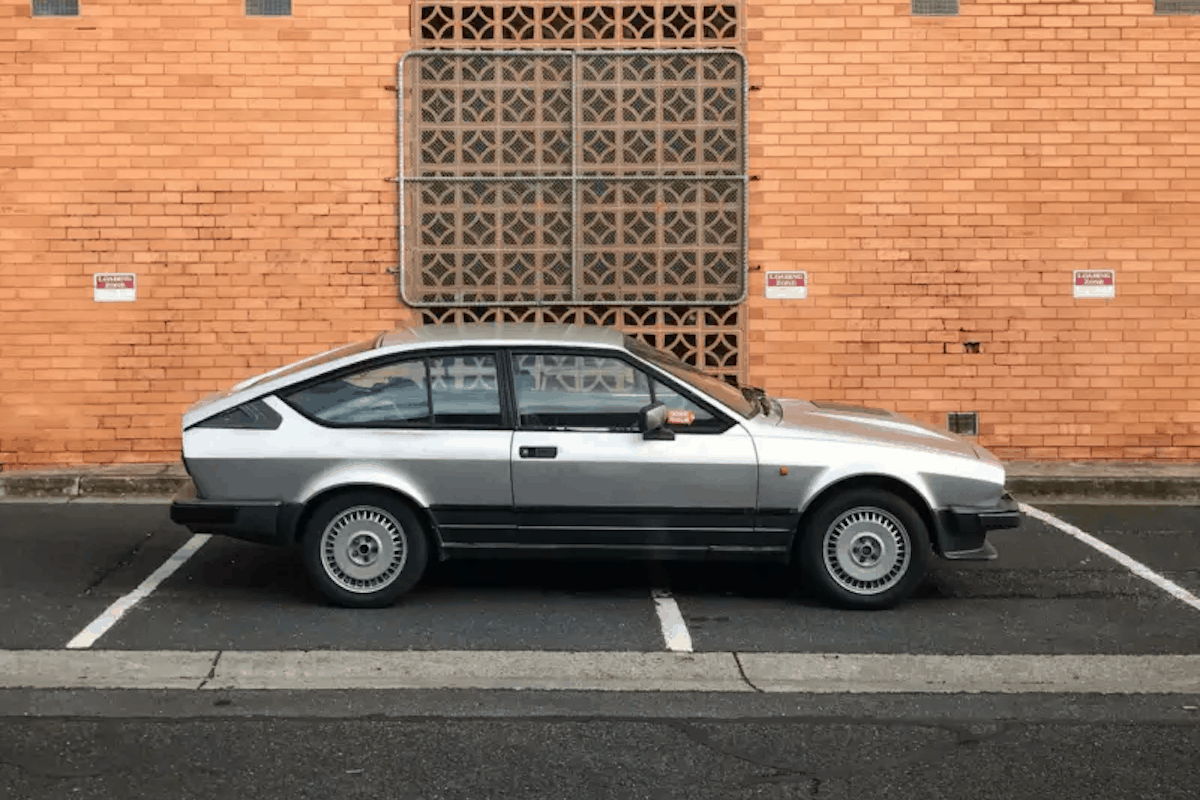 One of the most important facets of the James Bond film franchise’s lasting allure is the fantastic automobiles they always feature. Bond cars are the highlight of the films for many fans (including us here at DMARGE): cars like the unique convertible Toyota 2000GT from You Only Live Twice, the Lotus Esprit S1 “Wet Nellie” from The Spy Who Loved Me, the gravity-defying Ford Mustang Mach 1 from Diamonds are Forever, and of course the scores of Aston Martins, most notably Bond’s signature DB5.

But there’s one Bond car that’s not quite as well known, but just as worthy of contention: the Alfa Romeo GTV6, the hottest consumer-available version of the stylish Alfetta coupe.

This beautiful 80s GT car is an expression of Italian automotive flair par excellence, and a dream car for many Alfisti. If you’re one of them, or just someone looking for a very cool and very different ride, you’re in luck: a particularly fine example of the breed is on sale in Templestowe Lower, Melbourne on Gumtree. 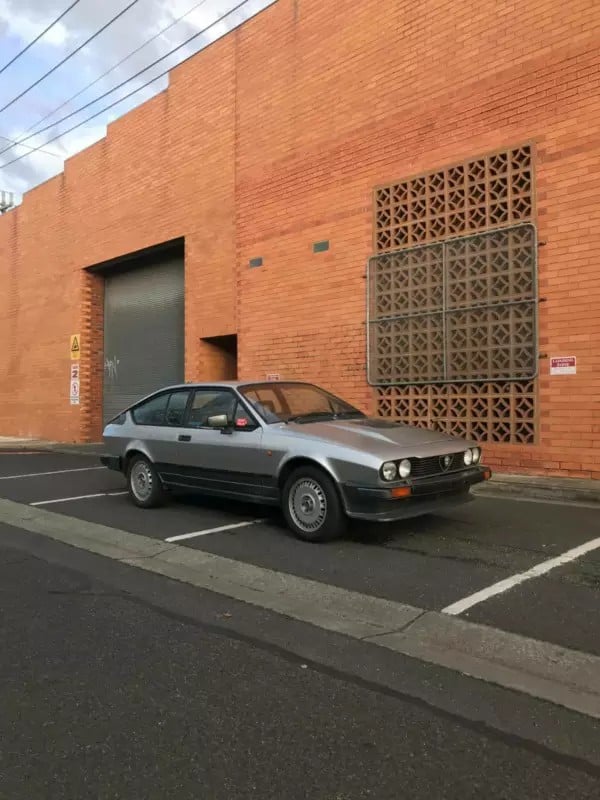 This rev-happy little Italian will leave you shaken, not stirred. Image: Gumtree

Visually distinct from the Alfetta, this GTV6 is powered by the same SOHC V6 2.5 L engine from the Alfa Romeo Alfa 6 luxury sedan (hence the name). Unlike the rather slow Alfa 6 however, the GTV6 has electronic fuel injection, making it much sportier and capable of a healthy 118kW. The instantly recognisable bonnet bulge was necessary to make the eponymous V6 fit in the GTV6, as the Alfetta originally debuted with a comparatively wimpy 80kW inline-four.

There’s just something so appealing about the design of Italian cars from this era: the clever mix of harsh angles and curves; the minimalist, ultra-futuristic instrument clusters; the forward-thinking but restrained use of plastics and composite materials… And of course, the throaty yet temperamental engines that power these beasts.

Bond’s joyride in the GTV6 is, to this date, the only time the car-loving character has got behind the wheel of an Italian automobile. In 1983’s Octopussy, Roger Moore as Bond steals a parked grey GTV6 in West Germany while its owner uses a payphone so he can race to foil villain Kamal Khan’s plot. 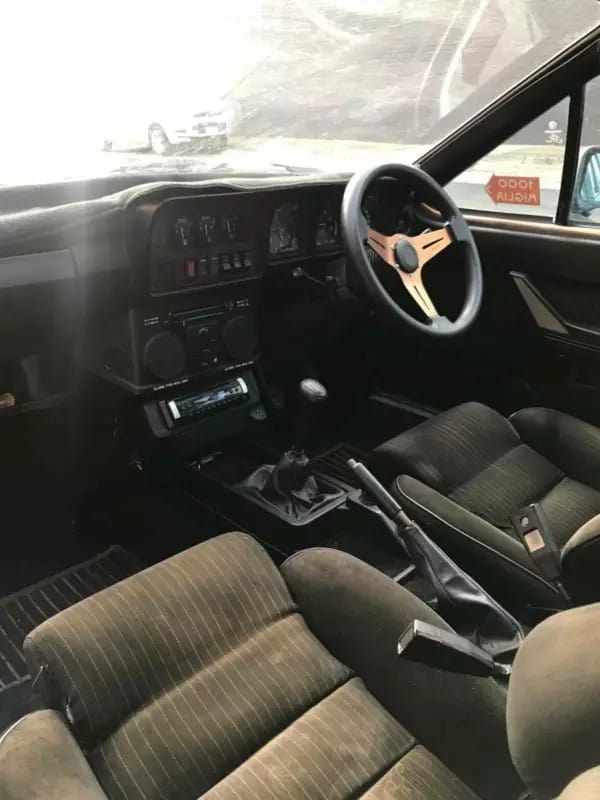 The Mille Miglia sticker on the driver’s side smoker’s window is a nice Italian touch. Image: Gumtree

The owner relates that this is a “very original 1985 Alfa Romeo GTV6 in silver with charcoal velour interior.”

“The car presents well, all original parts and panels, original interior and mechanicals. The car was originally Australian delivered to Victoria, it was moved to Queensland before coming back to Melbourne and stored. Since then it has been fully serviced, brand-new custom made stainless exhaust and drives beautifully.”

“Interior is in very good condition, just some cracks on the dash. Paint needs some attention in a few places, but a very good driving GTV6 with later model much-improved isostatic gearbox, that you can spend iso doing some small tidy-ups to get it perfect. Books show servicing til 150,000km… Would love for it to go to a good home.” 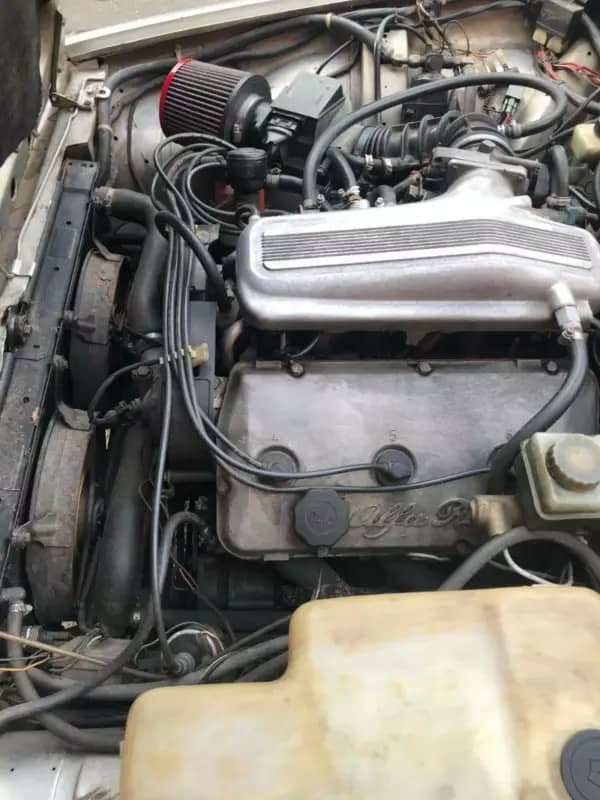 The engine that gives the car its name. Image: Gumtree

While no Concours show pony, this silver GTV6 is a perfect sporty daily driver. Imagine cruising down Lygon Street in this bad boy – you’d have jaws to the floor in an instant. Hardcore Bond fans would also appreciate your exceptional taste, too. Top Gear’s Jeremy Clarkson has touted the GTV6 as one of his favourite cars of all time, and ask any car nut and they’ll tell you you’re not a real revhead until you’ve owned an Alfa.

Why not make this GTV6 your ticket into the inner circle, then. It’s listed for only $18,900 on Gumtree (but you can shave a grand off the asking price if you mention @car_rave).

Thanks to Car Rave for finding this beauty. Check out more of their articles here.