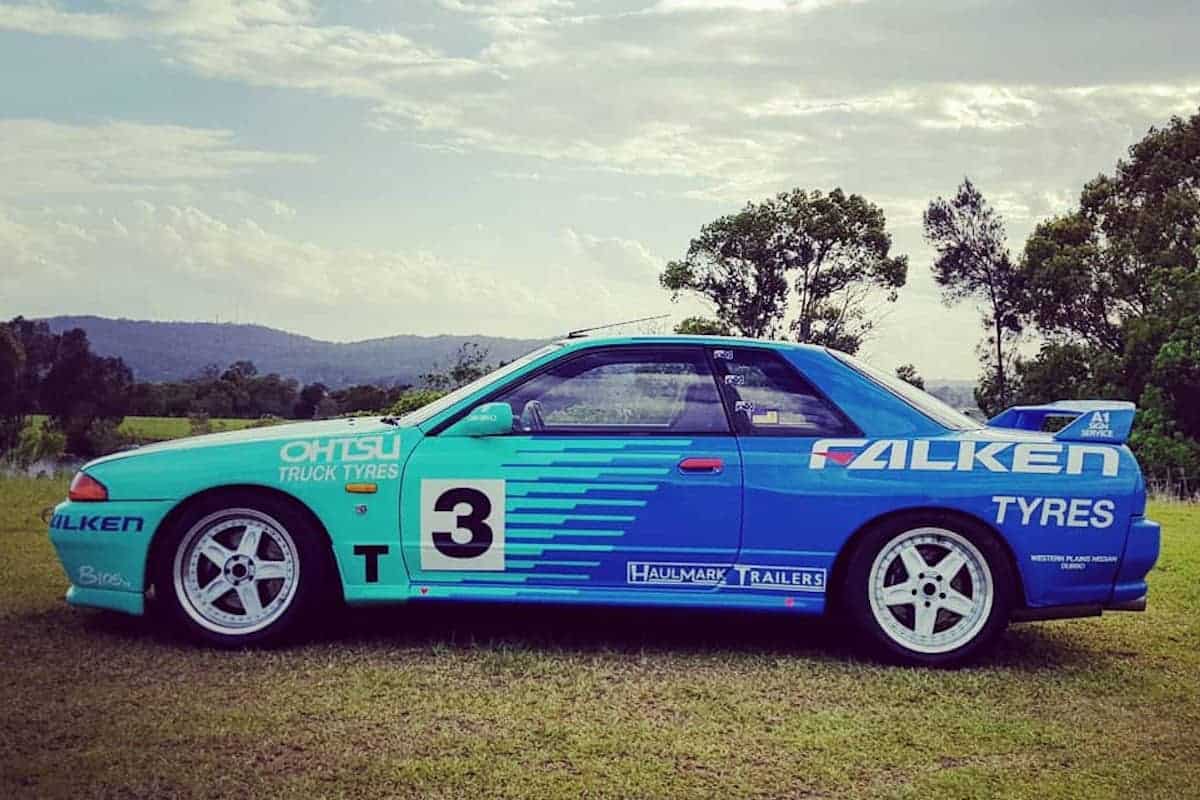 The GT-R name is one that immediately gets revheads hearts racing.

Spun off into its own model line in 2007, the GT-R badge first appeared on the third-generation Nissan (formerly Prince) Skyline. Lovingly called the ‘Hakosuka’ by fans in reference to its boxy dimensions (hako = box in Japanese) and powered by what was essentially a Formula One engine, the ‘Hakosuka’ was an immediate success both on the track and in dealerships, and laid the groundwork for the modern GT-R legend.

While the fourth-generation Skyline did see a GT-R variant, the 1973 oil crisis took a toll on the auto industry. Consumers weren’t interested in fuel-hungry performance cars any more, so Nissan shelved the GT-R. Nissan didn’t revisit the GT-R nameplate until the eighth-generation ‘R32’ Skyline – partially out of fear of diluting the GT-R’s legacy. However, the 15-year wait was worth it: the R32 Skyline GT-R is one of the most iconic sports cars of all time.

It’s easy to wax lyrical about the R32 GT-R, so we’ll keep it brief. Simply put, the R32 GT-R was the undisputed touring car champion of its time, winning the Japanese Touring Car Championship a whopping 29 times in a row, topping the 1991 Spa 24 Hour in Belgium by 19 laps and winning the 1990, 1991 and 1992 Australian Touring Car Championships, as well as the 1991 and 1992 Bathurst 1000s. It was nicknamed ‘Godzilla’ by Australian journalists because it was a monster from Japan… The name went global and further cemented its reputation as the king of sports cars.

The car was so dominant in Australian motorsport that it precipitated huge changes to the ATCC for the 1993 year. In what might be the ultimate sour grapes move, the rules effectively banned smaller, turbocharged imports from competing with the local V8 Holdens and Fords. The R32 GT-R was that good.

Indeed, this R32 GT-R directly contributed to that. On sale in Buderim on Queensland’s Sunshine Coast, this 1990 Nissan R32 GT-R Group E Falken Bathurst 12 Hour – or as we prefer to call it, ‘the Australian Godzilla’ – might just be the coolest car to have ever graced Australian roads. We don’t say that lightly, either. 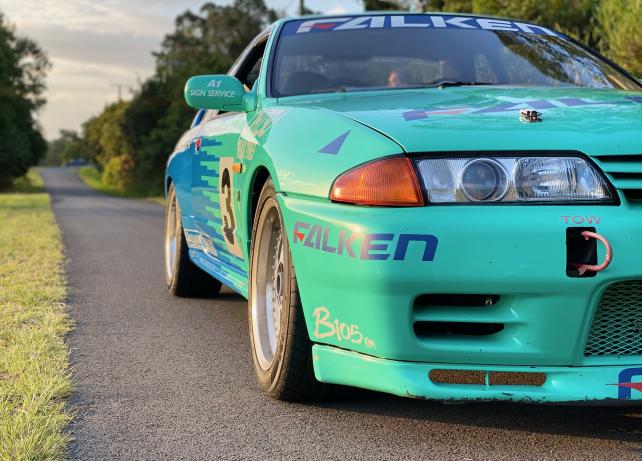 “Victorian registered EPX 118 and sporting chassis number 11268, this GT-R, one of 31 imported new to Australia and 5667 made by Nissan, was destined to lead an extraordinary life,” says owner Chris Bowden. The Bowdens are Australian motoring royalty: prolific car collectors and founders of well-respected car care brand Bowden’s Own.

“What it experienced between its 1990 build date and final ‘official’ duty at the 1993 Bathurst 12 Hour is remarkable, by any car’s standards.”

Highlights include that it was the first GT-R to get pulled over for speeding in Australia, served as the official pace car at the infamous 1992 Tooheys 1000 at Bathurst, and was eventually sold to Falken Tyres, who used the car as a promotional vehicle, hence its flashy decals. 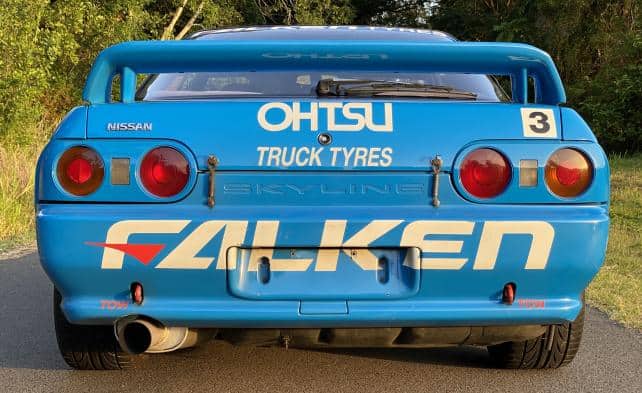 The view of the R32 that most of its contemporaries would have seen. Image: Ecurie Bowden

“The GT-R, as it sits today, is very nice to drive and looks fantastic in its original Bathurst 12 Hour Falken livery,” Bowden relates.

“A close inspection shows the original paint under the decals from 1993, with the #732 Black Pearl Metallic popping through where stone chips and marks appear – something historians like myself get a kick out of. The R34 engine in the car does not leak or blow smoke and performs well. It has never had high boost run through it, so should hang in there with that RB26 reliability for a very long time. The bolt-in roll-cage has been removed – so I can legally do the school run – but comes with the car.”

The conundrum facing its next owner is whether they peel off the decals and let the original black paint shine (as it did when it was a Bathurst pace car), or do you keep the historically accurate and significant Falken livery?

“The Tooheys 1000, along with the Wheels COTY award are all aspects of what makes chassis #11268 so very special, but, please think about this. She is still wearing her original, globally renowned Falken livery. You only get that once. She wore that livery when racing at the iconic Mount Panorama… On debut, after 1535kms flat out, she came 4th outright, in the globally renowned Bathurst 12 Hour. She has only had two, enthusiast owners since then and looks loved, but original.” 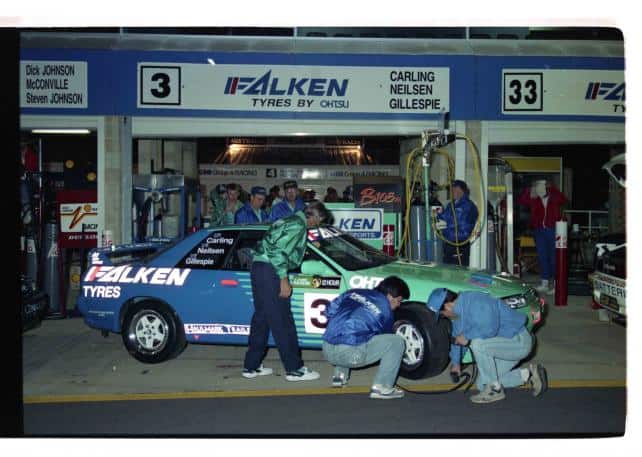 An archival shot of the ‘Australian Godzilla’ in the pits. Image: Ecurie Bowden

The history and specs of the ‘Australian Godzilla’ are so voluminous that it would be pointless to list it all here. All you need to know is that Bowden’s selling it for $142,000 and you can find it, as well as its enormous rap sheet, on his website.