“Watch out for the pothole.”

Tyler, the Creator is one of the most fashionable men out there.

The rhyme spitter, fashion designer and agent provocateur has been shaping youth culture for the best part of a decade. As the leader of notorious hip-hop and skate collective Odd Future, Tyler popularised Los Angeles’ unique brand of streetwear style and almost singlehandedly propelled Supreme to global fame. His ‘fuck you’ attitude and music influenced an entire generation of disaffected teenagers.

His last two albums demonstrated a shift in musical and sartorial style – a more mature direction that blends his trademark irreverence with more adult themes. Starring in campaigns for Gucci, collaborating with Converse and finding success with his own clothing label Golf Wang, ‘Igor’ has blossomed from rap’s bad boy to its effortlessly stylish, emotional flagbearer.

The evolution of both his music and fashion has been fascinating, but one thing has stayed constant: his fierce love for fine automobiles.

Tyler’s a noted car lover, and regularly raps about performance vehicles. While McLarens and Teslas are often the focus of his rhymes, the marque he has the most affinity for is BMW: he’s even got a song called ‘Bimmer’. But his hands-down favourite is the E30. Indeed, he was spotted turning up for a spot of clothes shopping in Hollywood earlier in October in an incredibly beautiful E30 M3 – with the ‘creamiest’ paint job you’ve ever seen.

For a man as flamboyant and outspoken as Tyler, it’s surprising that he hasn’t shown off his immaculate E30 M3 more often. He’s had the M3 for a few years now, but it’s only been fairly recently that he’s resprayed it from its original ‘Alpine White’ to its current cream look. It’s somewhat understated but luxurious and fits in perfectly with Golf Wang’s aesthetic: summery pastels and creams are a common motif in Tyler’s wardrobe.

RELATED: Effortless Ways To Develop Your Own Personal Style

Other than the paint job, the M3 otherwise appears stock; a testament to Tyler’s appreciation of the rare vintage vehicle. Another famous E30 M3 owner is fellow Odd Future alum Frank Ocean, who famously used a photo of an orange E30 M3 for the cover of his debut album Nostalgia, Ultra. The two hip-hop heavyweights’ cars have even been spotted sharing a parking lot together. 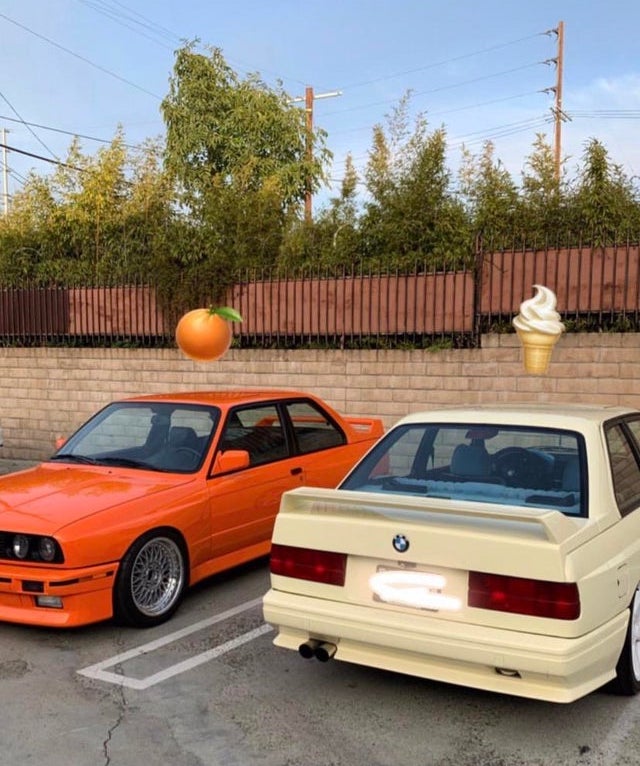 Unlike Tyler, Frank’s car is extensively modified, boasting a turbocharged E36 engine under the hood. The orange paint job is also decidedly not a standard BMW colour, unlike Tyler’s cream number, which more easily passes as factory-correct.

It’s a surprising contrast, as you’d think that the infamously reclusive Ocean would be the one with the more restrained car. Yet we’d say that’s entirely within Tyler’s character – he thrives on the unexpected. It also proves a valuable lesson: sometimes less is more when it comes to modifying cars.

Tyler’s latest creative endeavour has been a collaboration with Certified B Corporation Jeni’s, lending his signature whimsy and exceptional taste to a variety of fancy ice creams. Sadly they’re only available in the United States. We guess we’ll make do with Kylie Minogue rosé for our celebrity refreshment fix…