Ah, the duality of man… Sometimes we’re little more than just monkeys in shoes, and other times we’re capable of class and elegance. In theory, at least.

No man epitomises this better than Conor McGregor. The 32-year-old MMA champion and rabble-rouser might be a fiery, tattooed swagger monger – but he’s also got a deep appreciation for the finer things in life, like whiskey, haute couture and expensive Swiss watches.

The Irishman shared a rather confusing collection of photos to Instagram yesterday, interspersing shots of him training in the gym with shots of Gucci polos and designer towels… As well as a few choice snaps of one of his favourite watches, his Patek Philippe World Time (ref. 5231J) worth around $170,000. 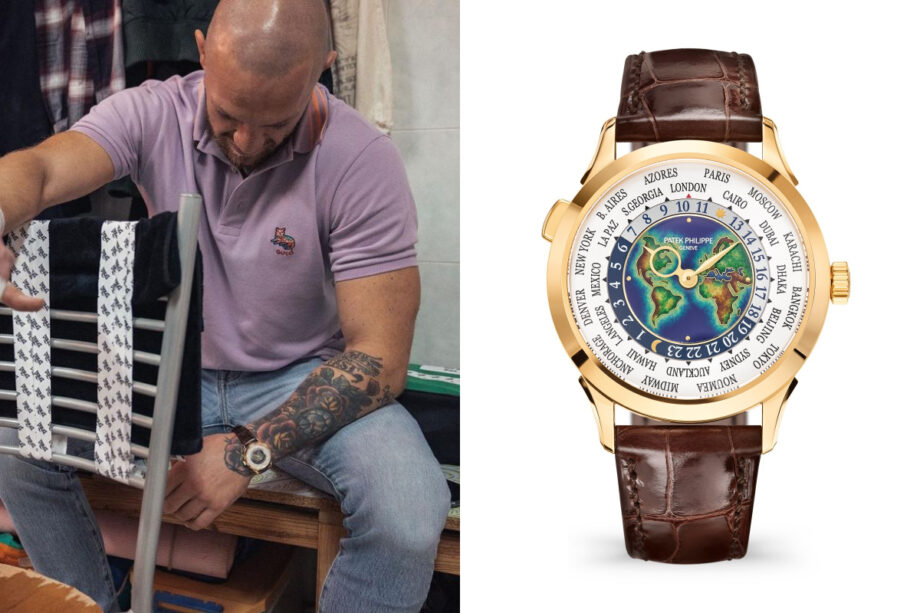 Originally retailing for around $74,000, this intricate World Time watch was first introduced in 2019 and features a 38.5mm yellow gold case and cloisonné enamel dial centre. Cloisonné is a technique where enamel, glass, or gemstones are separated by strips of flattened wire placed edgeways on a metal backing – in this case, more gold and multiple layers of enamel.

A rare and coveted timepiece, this World Time is the perfect watch for a flashy jetsetter like McGregor. To quote Bilal Khan from A Blog To Watch, “it tells you how rich you are in 24 time zones.” He likes to show it off, too, notably donning it for a photoshoot in late October of this year.

We’re not quite sure what he’s trying to achieve with this yin-yang gallery of fighting and flexing… Maybe it’s an intimidation tactic ahead of his fight with Dustin Poirier at UFC 257 on January 23?

This Patek is by no means the only expensive timepiece ‘The Notorious’ McGregor owns. He also owns an aggressively bedazzled $200,000 Rolex Daytona ‘Eye Of The Tiger’ and a $215,000 rose gold Patek Philippe Nautilus among other lavish pieces.

Maybe it’s all fight tactics? Assault the eyes as well as the solar plexus?

Sir Michael Caine Is Flogging Off His Personal Rolex Watch

A History Of Heritage: What Makes Breguet Watches So Special & Timeless

Jake Paul’s Watch Collection: The Awkward Truth About It

What The 2022 Rolex Price Increase Means For Australian Consumers