“What’s next: a sea of Kathmandu puffers out the front of Selfridges?”

All good cities are a little bit weird.

Sydney’s a sunny paradise… but its residents look at real estate like pharaohs. Tokyo is a bizarre mix of centuries-old tradition slapped right up against the cutting edge and kooky, shrines and maid cafes around every corner. And of course, New York, New York: home of the ‘New York Minute’, it’s crazier than an episode of Seinfeld.

London, like the other world cities previously mentioned, is also delightfully weird. From the publically-sanctioned ranting and raving of Hyde Park’s Speakers’ Corner to the silly costumes and strutting of the Queen’s Guard, The Swinging City is as strange as they come.

One particularly strange London moment occurred yesterday morning when over 300 young people descended on Harrods, one of London’s most famous department stores, sparking fears of a terrorist attack, news.com.au reports. 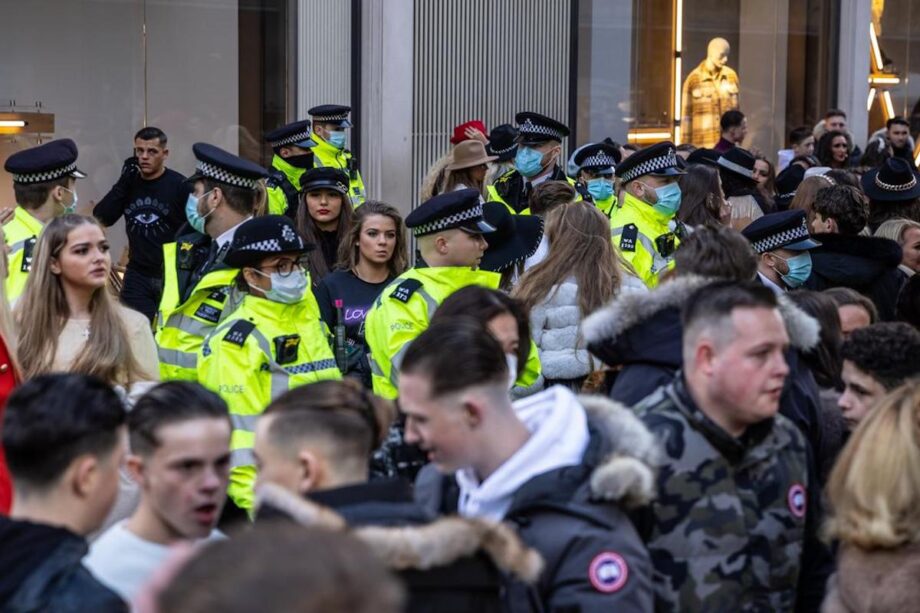 While such a large group of people – few of whom were wearing PPE, plus some of which were threatening police and security – was certainly confronting, thankfully people’s worst fears weren’t realised. However, what we found shocking (aside from the blatant disregard of social distancing), wasn’t the crowd itself.

No, what we found shocking is that it seems as if the British hooligan’s time-honoured choice in outerwear is changing.

Chavs, bods, scallys, whatever you want to call them – virtually all youth subcultures in the UK are in some way indebted to hooligans. Football hooliganism has a long and proud tradition in the UK. The image that’s most commonly associated with the subculture is that of the ‘casual’: tough young men who wear designer outerwear instead of club colours in order to evade detection from law enforcement and to intimidate rivals.

Many classical hooligan brands are Continental in origin: Adidas, FILA, Lacoste, Sergio Tacchini… But by far and large the most stereotypical hooligan brand has always been Stone Island. Known for their high price, experimental fabrics and iconic black arm patch branding, the Italian brand has in recent years become part of the hypebeast pantheon thanks to its association with hip-hop, up there with designer streetwear brands like A-Cold-Wall*, Gosha Rubchinskiy and Off-White.

However, it seems as if Stone Island is falling out of favour. Perusing images of this strange Harrods rush, you can see literally dozens of young men wearing Canada Goose jackets – it can’t be a coincidence. Seems as if one premium outerwear brand is being replaced with another.

Founded in 1957, Canada Goose is (you guessed it) a Canadian winter clothing manufacturer, known for their incredibly high-quality garments and distinctive red sewn patch logo. In many ways, they’re quite similar to Stone Island: premium, minimalist branding, functional yet fashionable. It’s somewhat more affordable than Stone Island and crucially, isn’t quite as well known in the public consciousness.

It makes sense. Since American rappers like Drake, Post Malone and Travis Scott have started wearing Stone Island, it’s started to lose its working-class, ‘if you know you know’ credibility. Canada Goose doesn’t have that baggage. Rocking a Canada Goose parka is still a way to flex (and stay warm) but it’s less overt than a Stone Island jacket. Indeed, wearing ‘Stoney’ these days is a way to get noticed, not to avoid attention, especially from the police.

We wonder what other brands are on the way in. What’s next: a sea of Kathmandu puffers out the front of Selfridges?