‘Better Than Sex’: Australia’s Most Expensive Coffee Blew My Mind

“It opened my third eye.” 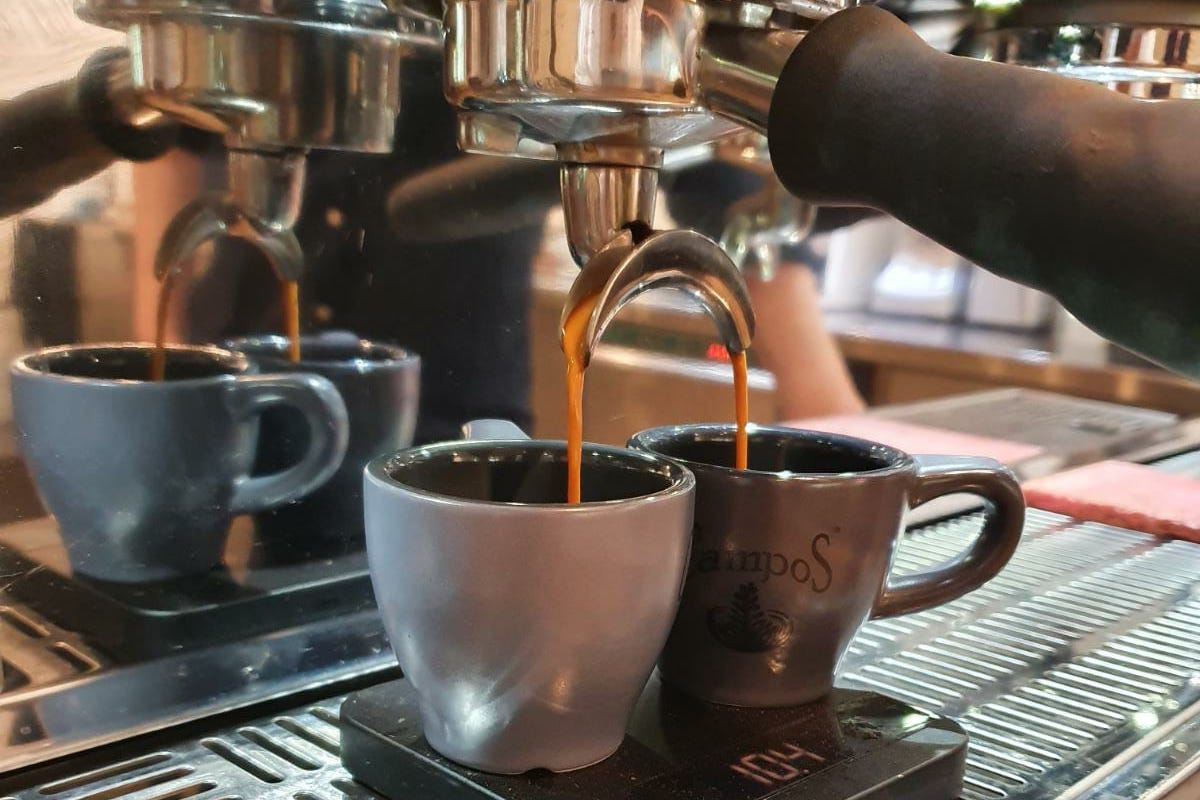 Because coffee is so ubiquitous in our life it’s sometimes hard to conceptualise how broad the world of brews and beans really is.

Sure, we can usually recognise a good cup of coffee from a bad one, and most people broadly understand how different forms of preparation can affect how coffee tastes, but that’s just the surface level. Maybe it’s because I write about cars a lot but coffee and cars are very similar (and that’s not some allusion to Comedians In Cars Getting Coffee).

Some people are happy with driving a bog-standard commuter car and filling it with regular petrol. Some people want to drive a sports car, or a luxury car, or an SUV, and put premium in it. Coffee’s the same: some people are perfectly happy to drink instant coffee at home or a $1 long black from 7/11, and others are happy to spend a bit more on a cup; cultivate a relationship with a barista or cafe; grind their own beans or invest in expensive home equipment. Different people value different things.

So with that in mind – the idea that the gulf between the bottom and top tier can be almost limitlessly vast – how much better than your average bean can the Rolls-Royce of the coffee world really be?

Campos Coffee, one of Australia’s pre-eminent coffee producers and a favourite of baristas across the country, recently released their most expensive, exclusive single-origin yet: their Best of Panama Auromar Catalina Geisha – the most expensive coffee in Australia.

The Best of Panama Competition is by far and large the world’s most prestigious specialty coffee auction, Campos relates, with this particular “ultra-premium coffee” coming from a multi-award-winning farm. Only available in 50g tins for the punchy price of $80, the coffee is grown at a farm over 1500m above sea level in the highlands of Candela, Chiriquí, Panama. Only the ripest coffee cherries are painstakingly picked from the farm’s most shaded lot, which are then slow dried on raised beds for up to 30 days. Finally, the beans make their way to Sydney where they are lightly roasted by Campos’ artisan coffeemakers.

That all sounds exotic, but let’s reflect on that $80 for 50g price. That works out at about $25-$30 a cup. For comparison, the second most expensive coffee Campos currently sell to consumers is their ‘Panama Elida Estate ASD’ – another Panamanian single-origin – which is priced at $29 for 200g. Then, consider that Lazzio, ALDI’s coffee home brand and a favourite of one of Australia’s top food critics comes in at just $12 a kilo. That means that this ‘Best of Panama’ is over 130 times more expensive than the ALDI product (which is already pretty damn tasty)… 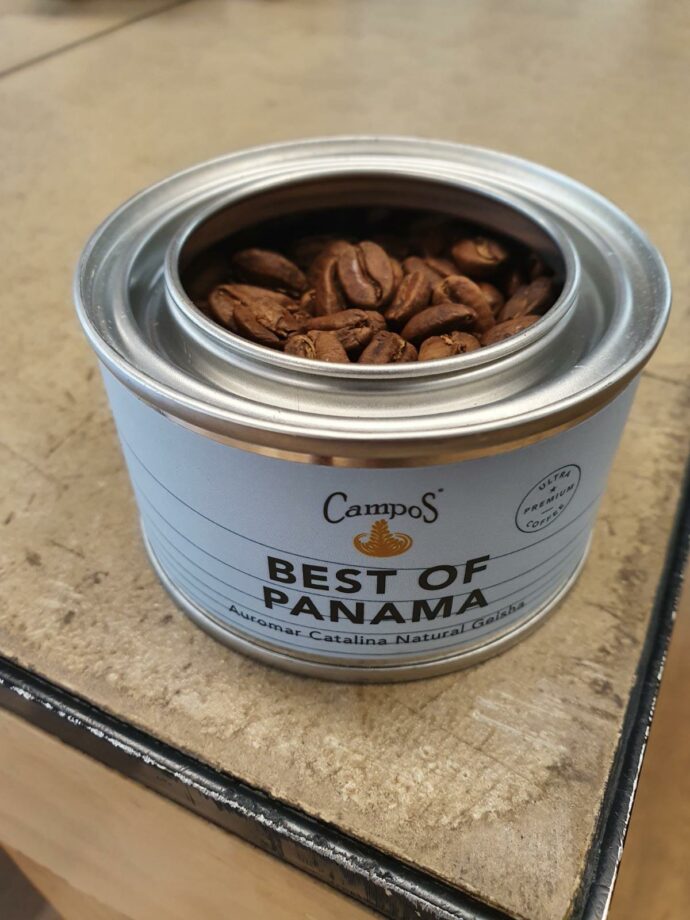 A closeup of the ‘Best of Panama’, which gives you some perspective on how much (or little) 50g of beans really is. Image: Steve Nguyen/DMARGE

To say we here at DMARGE were sceptical of the ‘Best of Panama’ is an understatement. Thankfully, our resident coffee snob Steve arranged for us to visit Campos at their head office in Banksmeadow in order to try their ‘Best of Panama’ for ourselves.

And let me tell you: it’s worth every cent.

First, Campos’ Coffee Program Specialist Geoff Clarke took us on a behind-the-scenes tour of their roastery – a veritable Valhalla for coffee lovers. The smell was indescribably good in the temperature-regulated warehouse, shelves stacked high with sacks of coffee from around the world: Colombia, Indonesia, Rwanda… Watching the roasting machines churn the beans over and over was mesmerising, as was watching Campos’ master roasters hard at work painstakingly sorting and blending different coffees to be sent off to cafes around the country.

It was shock and awe for sure, but it had us champing at the bit for the next step: taking our ‘Best of Panama’ and making it into something we can drink. Campos’ test kitchen is right next to their front office, filled with a wide array of grinders, machines and tools to produce the perfect cup.

Geoff, our coffee guru, helped us make three cups of coffee: a filter coffee with a Hario V60 and an espresso made with a La Marzocco Linea 4 machine, both of which we used a Mahlkönig EK43 to grind our beans. We also made an AeroPress coffee with beans hand-ground (by Steve) in a Porlex Mini II, to try and approximate what it would be like for someone trying ‘Best of Panama’ at home. 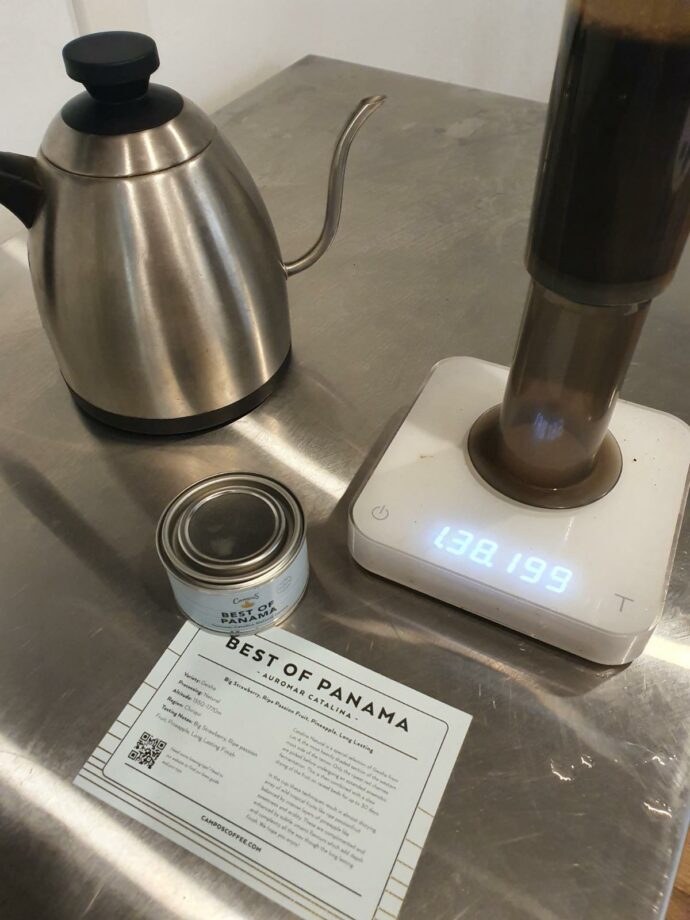 Okay, let me put you out of your misery. All three cups were divine. The depth of flavour was unlike any coffee I’ve ever had: rich and intense tropical fruit notes, tangy but not astringent or bitter in the slightest, with a mind-bogglingly long-lasting finish that left funky, savoury notes dancing on my tongue. It was basically a spiritual experience: it opened my third eye, blew my mind and blessed me with coffee enlightenment. I understood the hype. Even Steve was impressed.

What was intriguing was how different the results from each brewing method were. To my palette, the pour-over was the fruitiest of the three, whereas the espresso brought out more of the savoury flavours. My favourite, however (and rather surprisingly) was the AeroPress, which produced a smooth, slightly buttery coffee that I found to be the best of both worlds.

Normally I don’t trust anyone who describes something as being “better than sex” because that normally makes me think they’re just not very good in bed. That said, I’ve had some terrible sex in my time, but I haven’t had a bad cup of Campos’ ‘Best in Panama’. Without being too lurid… it’s coffee so good that it will ruin you for life. Once you reach that summit, it’s hard to come down – my daily cup of joe just doesn’t hit the same any more.

Is it worth $80 a tin? Hard to say. Perhaps there’s a degree of cognitive dissonance involved because as consumers we’re just not used to thinking of coffee as a luxury good in the same way as other foods or drinks. Spending hundreds of dollars on a bottle of fine wine or a wheel of cheese seems justifiable; normal, even. What’s so different about doing the same for coffee?

Campos’ ‘Best of Panama’ is only the tip of the iceberg when it comes to ultra-premium coffee, too. Back in 2017, Manly’s Seven Mile Coffee made headlines when they started offering a $55 cup of coffee, also made from Best of Panama Competition-winning beans, and in 2019, a San Francisco cafe took the title of ‘world’s most expensive cup of coffee’ when they started offering a $110 cuppa – again, made from Best of Panama Competition-winning beans. With that in mind, $30 a cup for Campos’ offering seems almost reasonable.

It’s all certainly something to mull over your next flat white.

You can order a tin of Campos’ Best of Panama Auromar Catalina Geisha for yourself – plus find out more about how it’s produced – at Campos’ online store here.