And not just because it’s incredibly fast. 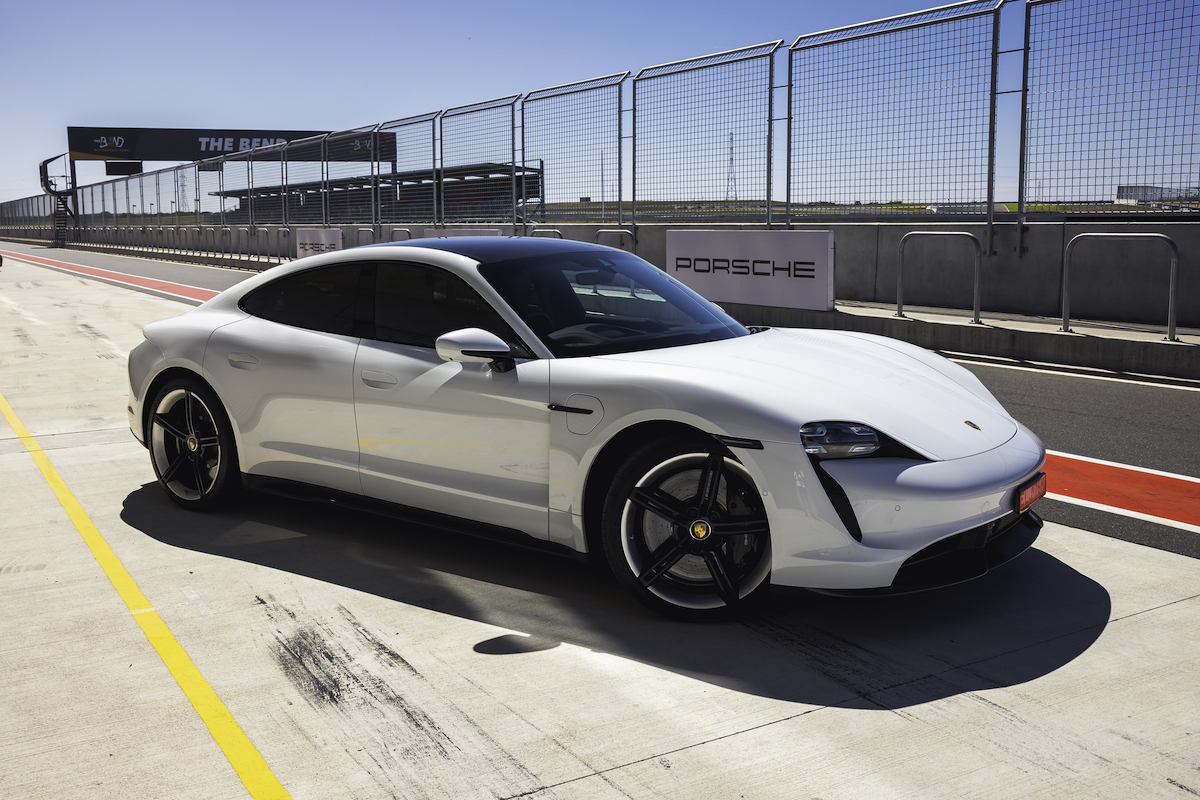 There’s never been a better time to be into cars.

On the one hand, we’ve more or less hit ‘peak petrol’: internal combustion engines are so incredibly advanced and efficient, with modern performance cars leagues ahead of models from even five years ago. On the other hand, electric vehicles are finally becoming genuinely viable – with their performance credentials often far exceeding what ICEs are capable of. We’re really at a crossroads.

But the issue for Australians is that few brands sell entirely electric vehicles Down Under. So when the Porsche Taycan hit our shores, it was a real cause for celebration: a sleek, fast, four-door EV that looks like a bloody concept car and is made by the same company that came up with the 356 and the 911? Sounds pretty good. Indeed, DMARGE founder and publisher Luc Wiesman had the chance to drive the Taycan 4S in Finland and was thoroughly impressed.

Still, there have been plenty of sceptics, but Porsche joining the EV revolution can’t be taken lightly. Remember that the Cayenne back in 2003 pre-empted the rise of luxury performance SUVS: Porsche has always had its finger on the pulse. The Stuttgart marque spent 10 years and over and €6 billion developing their “Tesla killer”, so this is by no means a passing fad.

But one big question still remains for many car lovers: how does an electric Porsche compare to their ICE performance offerings? To help answer that question, Porsche invited a select group of Australian motoring journos (and myself) to The Bend Motorsport Park outside of Adelaide to find out for ourselves. 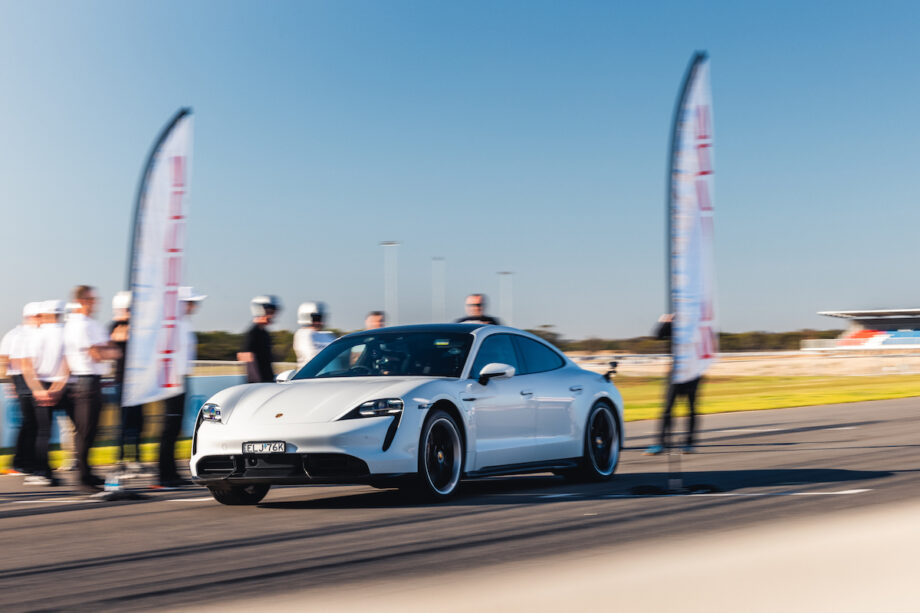 The Bend is Australia’s newest motor racing destination and a truly unique facility. The second-longest permanent race circuit in the world behind the famous Nürburgring in Germany, it’s a thoroughly modern track with an exciting layout and a nice long straight.

The very first thing we did, bright and early in the morning with the track all to ourselves, was have a go at launching the 500kW Taycan Turbo and the 560kW Taycan Turbo S down that aforementioned straight. (Note: the cars aren’t actually turbocharged; the ‘Turbo’ moniker just follows the naming tradition set by older high-performance models.)

Launch control in the Taycan is a doddle. Left foot all the way down on the brake, right foot on the throttle, then let go. No complicated menus or anything. It sounds like a spaceship as it gets ready to take off, and then when it does, the acceleration was virtually instantaneous and mind-melting. That first run, I wasn’t looking at the speedometer or worrying about my 0-100 time. I was holding on for dear life and giggling like a madman.

I managed to do 0-100 in 2.5 seconds – which, as the eagle-eyed might point out, is a good .3 seconds faster than Porsche’s claimed 0-100 time for the car. The reality is that Porsche drastically understates the car’s performance – better to underpromise and overdeliver, as they say. My time was by no means the fastest, either. Some of the more experienced drivers were going much quicker. That alone speaks volumes about the car.

But what was really impressive about the Taycan Turbo S was how consistent the performance was. We had two cars on the track – a Turbo and a Turbo S – with all of us taking turns launching the pair. One went down the track, the next got ready, and so on. We must have collectively launched each car over twenty times – despite that abuse, both cars only depleted about 15% battery and there was no significant impact on performance.

Even more wild was the fact that you could just about touch the brake rotors after a launch. Waving your hands near the rear rotors of a 911 after a launch would be a great way to burn yourself, for comparison. But because the Taycan, like virtually all EVs, benefits from regenerative braking, the actual brake callipers and rotors aren’t worked as hard. Oh, and it fills the batteries at the same time. Mad. 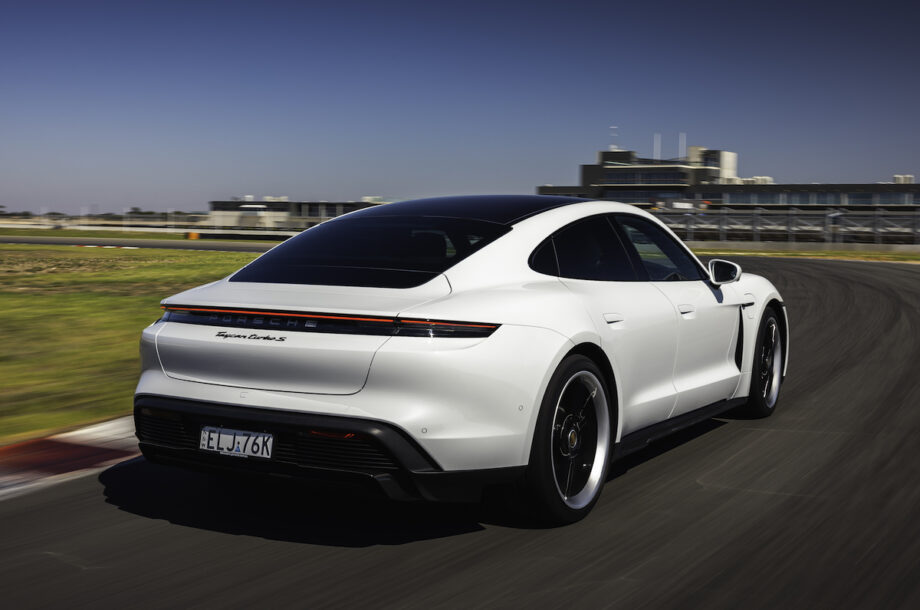 Then we got the chance to take it out on The Bend’s East Circuit, an almost 4km-long twisty track that let the Taycans really show off what makes them so special.

In short, the Taycan is effortless on the track. All-wheel-drive, oodles of torque and beautiful handling make it a breeze to drive. Despite being a reasonably heavy and long car – it sits somewhere in-between a 911 and a Panamera in size – it feels nimble yet planted, the electric batteries giving it a low centre of gravity.

It’s hard to overstate just how unique it feels to drive. That instant, linear EV acceleration and the impressive stopping power of regenerative braking make it a track monster. But you don’t feel coddled, or like it’s making things too easy for you. It’s still very much a Porsche: precise, capable, but in a way that invites you to really push the car to the edge.

We also had the chance to take the new 911 Turbo out for a spin, which is perhaps the Taycan Turbo S’ closest rival in terms of performance. And the difference between the two cars was striking.

The 911 Turbo is fierce; a Hannibal Lecter of a car. It’s cool and composed when cruising, but put your foot down and it wants to bite your head off. It snarls, pops and burbles like a wild beast – pure theatre and pure thrills. It’s a brilliant car and would have even the most rusted-on greenie changing their perspective on ICEs.

The Taycan is different. Appropriately, it feels very German. Like a German philosopher. Polite, cultured and with depths to plumb… But radical, forward-thinking, a game-changer. 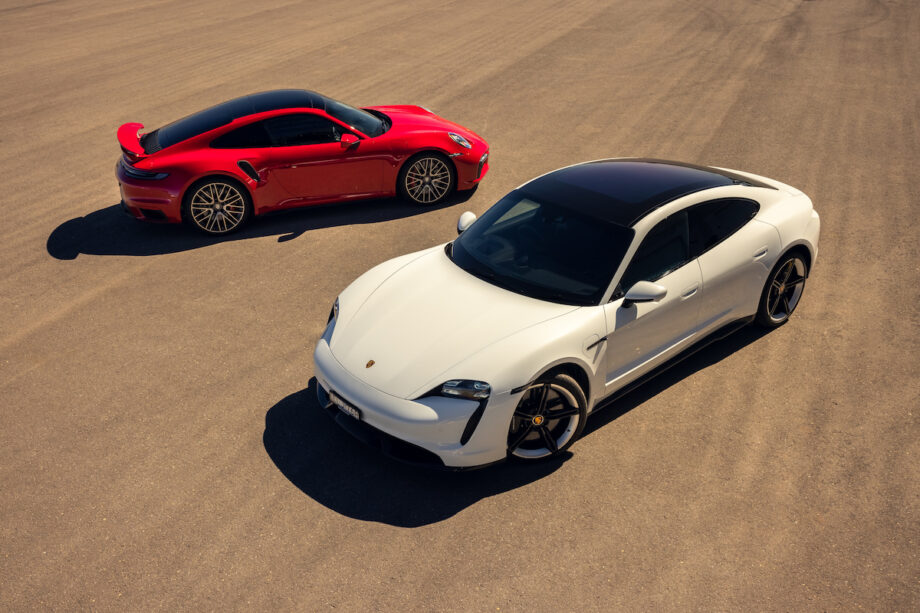 The 911 Turbo versus the Taycan Turbo S. Image: Porsche Australia

Which would I rather own? It’s a tough decision. I’ve been a Porsche fan since I was a little kid – I still have a poster of a Boxster Spyder on my bedroom wall, and a little model 911 Turbo adorns my desk at work. The 911 Turbo is a superb car, and one I would own in a heartbeat. I’ve always wanted one.

But the Taycan Turbo S, in my opinion, is the ultimate ‘have your cake and eat it too’ car. It’s got more performance than you’ll ever need, but it’s also a very easy car to live with. It’s comfortable, easy to use (the cockpit and infotainment system is far more ergonomic and intuitive than any of its competitors, especially Tesla) and looks like a supercar.

But it’s also an EV, so you don’t have the guilt of killing the planet you might get if you drove something like a Lamborghini Huracán (as much as we love that car). It’s an investment in the future; a statement of intent; a chance to be ahead of the curve. Just like Porsche.