Every country and its people have a different national stereotype. Australians are rugged, the Italians are passionate, and so on. The English, however, are known for their charm and class – and there’s few Englishman as classy as Benedict Cumberbatch.

The 44-year-old star of Sherlock, Doctor Strange and The Imitation Game is widely considered one of the most talented and versatile actors alive today, as well as the veritable model of an English gentleman: well-spoken, refined, and with impeccable taste. Like any gentleman worth their salt, he has an interest in fine timepieces – so it’s no surprise that in 2018, he formalised a relationship with Jaeger-LeCoultre, one of the world’s finest and most refined watchmakers.

Last year, he teamed with ‘the watchmaker’s watchmaker’ on the launch of their new Polaris Mariner collection, filming an adventurous free-diving expedition to New Zealand to put the watch through its paces. Cumberbatch’s latest collaboration with Jaeger-LeCoultre, however, reflects that classically elegant aspect of his character – with a rather elegant new timepiece.

Enter the Jaeger-LeCoultre Reverso Tribute Nonantième: an exceptionally tasty new version of one of the most iconic watches of all time. 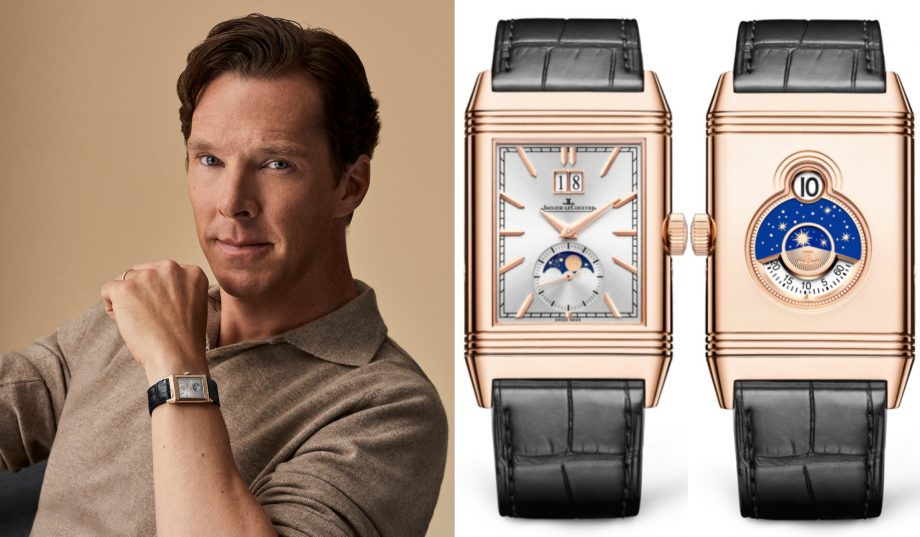 Like many Reverso variants, the Tribute Nonantième features two time-telling faces. Its obverse features a beautiful sunray silver dial as well as a large date window at 12 o’clock and a moonphase aperture at 6 o’clock, elegantly incorporated into the seconds counter. It’s classic JLC fare, which is to say, brilliant.

Flip over the Tribute Nonantième, however, and you’ll expose a 1930s-esque digital time display, which similarly includes a day-night indicator. Minimal and unconventional, it allows the radiant pink gold of the Tribute Nonantième to really shine, as well as giving the wearer a dramatic stylistic alternative to the obverse face.

“I’m fascinated by mechanically complex watches but for me, the perfect watch is understated, elegant and pragmatic,” says Cumberbatch.

“The Reverso Tribute Nonantième is so special because the front is really understated but there is complexity and visual drama on the reverse side. I can keep it hidden for my own pleasure or show it when I want to.”

Cumberbatch is set to appear in three films releasing later this year: the biographical film The Electrical Life of Louis Wain, the drama The Power of the Dog as well as the Marvel Cinematic Universe feature Spider-Man: No Way Home, reprising his role as Doctor Strange. 2022 will also see the next Doctor Strange film, Doctor Strange in the Multiverse of Madness, which is currently in post-production.