I like to think myself a tough guy. A Tripadvisor guru. A man who books cheap flights in one hand while saute-ing hostel leftovers in the other. A man deaf to snores and creaking springs. A man who eats 10-hour delays for breakfast and enjoys a cold marble floor. But nothing could have prepared me for Sofitel Nusa Dua’s 5-Star Beach Resort.

Drawn by the  floating breakfasts, shimmering pool, and a private butler service that hotel PR teams talk about in hushed tones, I felt compelled to dip a toe into the Luxury World. For journalism.

But first: context. As The Economist observed in 2017, the prospect of getting a flight-upgrade used to be enough to make “respectable people fling themselves to their knees like beggars.” However, in 2019, a Photogenic Floating Brekkie (delivered by a team of private butlers), is the new #goal of Luxury Travellers seeking Instagram Steeze.

Don’t believe us? Just check out the 19, 536 Instagram posts with the hashtag ‘floatingbreakfast’ (or consider the fact that 75 of them were uploaded in the last 24 hours alone).

From Bali’s Nusa Dua to the Gulf of Thailand, the obsessive quest for the perfect floating breakfast (shot) has become a veritable phenomenon. Mine, however, was more of a natural disaster.

It all began when three hotel staff brought a heavily laden breakfast tray to my door, and brought it through to the pool for me. Rubbing the sleep from my eyes, I asked them to put it in an almost enclosed area, knowing that I would require a minute or twenty to get ready. 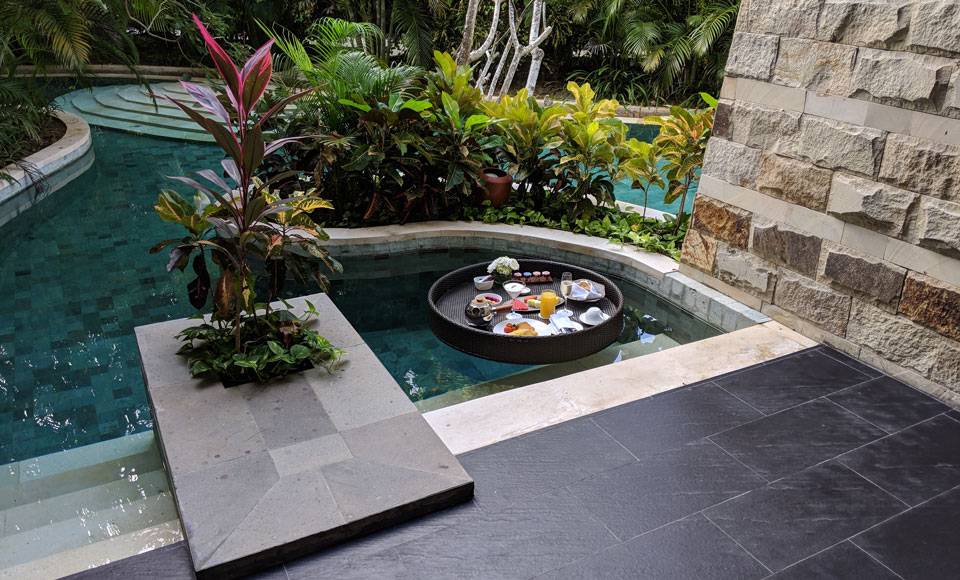 Perfectly arranged, with Champagne on one side and coffee on the other—but not for long…

They put it down, confused as to why I didn’t want it in the main section of the pool, which would have allowed me to wander around and take photos. “No, no, it’s all good,” I replied, not wanting them to realise I was planning on getting another quarter hour’s sleep.

“You sure?”, they asked, reminding me the tray required two people to move.

I returned 15 minutes later, with a marginally clearer head, only to realise that a one-metre squared radius was hardly going to show off the pool in all of its glory.

Although the staff would have come back in a heartbeat, I was embarrassed to ask. So I moved the tray myself—putting my back out, spilling my champagne, drenching my croissants with orange juice and creating some home-brew cafe au chlorine in the process.

I then hastily re-arranged each item so that it resembled how the hotel staff had left it. But before I even had the chance to look around guiltily, my private butler appeared out of the (perfectly manicured) undergrowth, wielding an iPhone and the grin of a Papparrazi photographer who had just caught the royal baby taking its first steps.

I then posed for a few photos, attempting to ignore the rumbling in my stomach and the chlorine on my tongue. Then I realised: I was missing the point of a floating breakfast. Enjoyment. 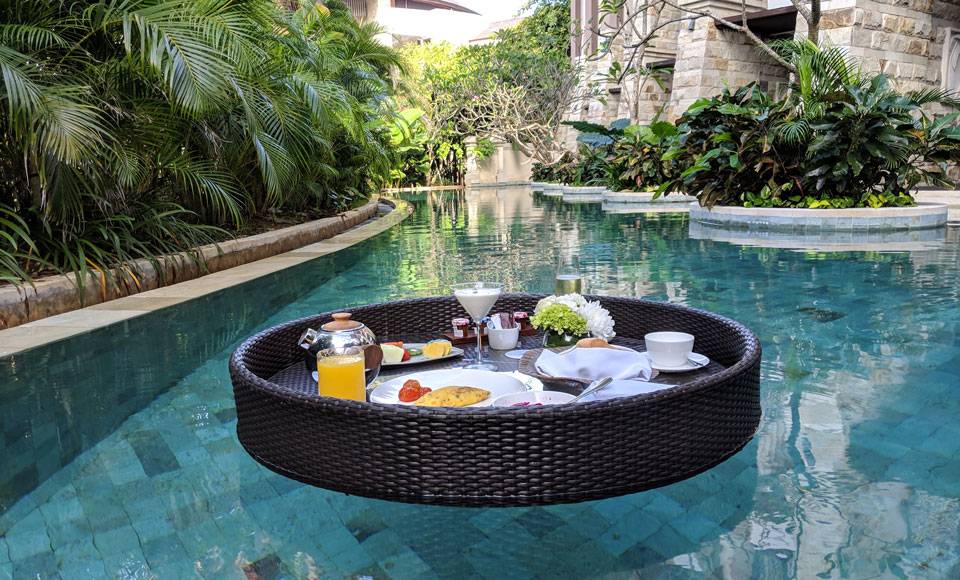 I ate a few bites of my omelette, gobbled my Smoothie Bowl, and waded around trying to look cool (but looking more like a pale, elderly man with a mobility aide). 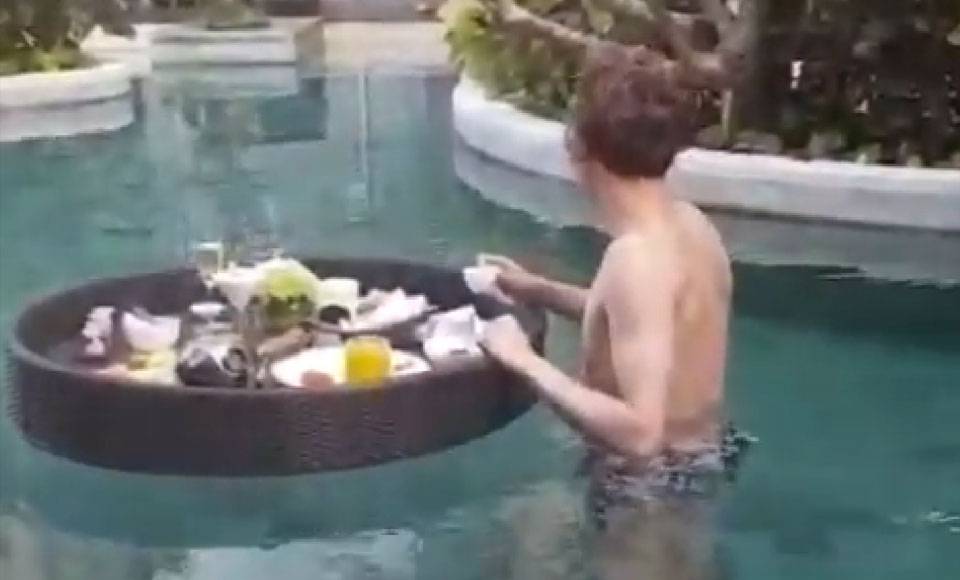 Image blurred for the sake of your eyeballs.

I then returned my tray to the pool edge outside my back door, and popped inside to make some capsule coffee. By the time I returned, the tray had gone. But after hearing so much about the hyper-efficiency of the hotel’s butler service, I assumed my tray had been whisked away in more capable hands, shrugged, and went back inside.

Later in the day, I came upon the Press Group discussing what sort of person would order a floating breakfast only to send it on a solo adventure around the Nusa Dua resort. I mean—seriously—who would do that? Right?

In all seriousness: Sofitel’s floating breakfast is an awesome experience that anyone with slightly more common sense than I will be able to enjoy. Just remember not to put it in the side compartment of the pool, and to pack your compass and map.