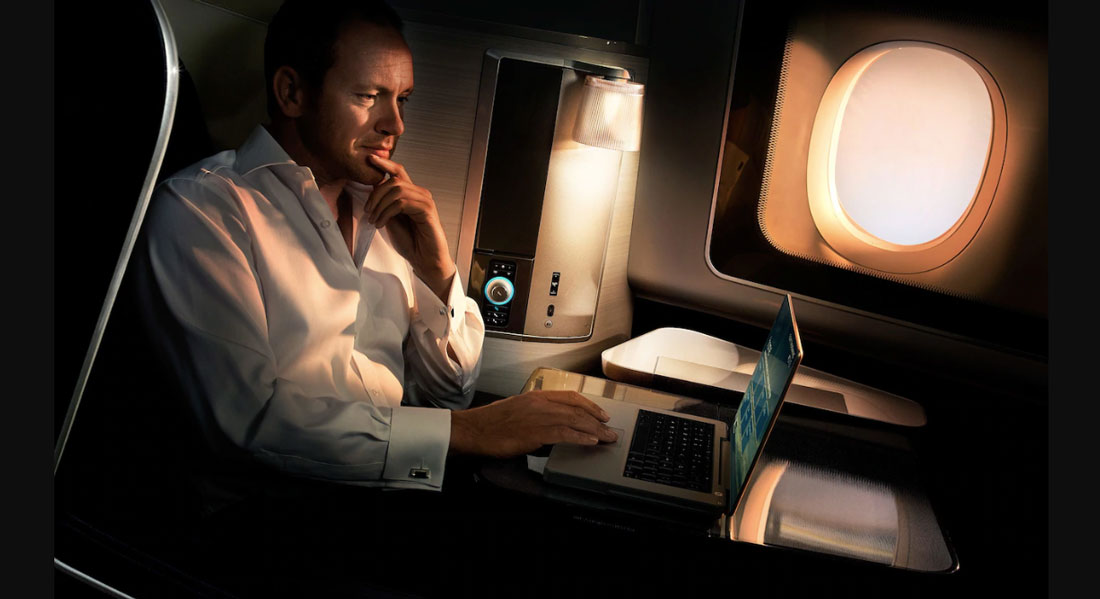 If flying business-class is like spending the night in an overpriced discotheque (purple lights and all) then flying first-class is like ~vibing~ at a bespoke cocktail bar: still hedonistic, but a little more private.

That’s the stereotype, anyway. But what most people don’t realise is that the retreat-like feels are just the tip of the first-class iceberg.

Anyhow: in a climate where newcomers to the Pointy End Cone Of Trust revel in exposing the indiscretions of business-class stalwarts, it’s no wonder cashed-up flyers are opting for ever more private business-class suites or – better yet – making the jump to first.

RELATED: Score Up To 150,000 Membership Rewards Points When You Sign Up For An American Express Platinum Card

However, even as this happens, fiscal business travellers still mock the first-class heathens who spend tens of thousands of dollars for an extra metre squared between the edge of their bed and the wall of their suite (and to eat a slightly but not significantly better meal than the one they would be served in business-class).

Why? Previously we’d have said Tall Poppy Syndrome. But it has recently come to our attention that there are a number of advantages to flying first-class that you don’t truly appreciate until you actually do it.

In fact, first-hand observations from our editor-at-large, Luc Wiesman, as well as a recent back and forth we had with British Airways suggests that – despite the vast work of literature to the contrary – flying first is as much of a step up from business as business is a step up from economy.

So, even though there is less of a visible “lie-flat vs. knee-crunching” difference, there are some crucial advantages to flying first-class over business-class that those who have never experienced it (myself included) love to knock.

Today we’re here to rectify this; listing of all the reasons it’s worth it to fly first-class over business-class, particularly internationally.

If the sweaty suit yelling at a flight attendant that he ought to be boarding before the elderly couples and mothers with young children so graciously demonstrated to us recently, flying business-class is no guarantee that you – nor those around you – will keep their cool while travelling.

While business-class spares you some of the indignities of air travel, you’re still left to dwell for hours on your chicken edamame sandwich in the case of a delay, and – shock, horror – occasionally have to board with, not before, economy passengers with medical conditions, or – in the case of Qatar Airways’ A380s – with Economy passengers who have pre-selected one of the economy seats on the plane’s top deck.

If you’re flying first-class, however, this is all a non-issue.

It gives you the chance to network

On first-class, even if your flight is indefinitely delayed, or even you arrive at your destination to find your luggage has been dispatched to The North Pole, you’ll be too busy networking with industry big wigs and being shouted tax-payer-funded drinks by corrupt politicians to have an existential chicken edamame crisis.

It gives you a more streamlined airport experience

Some airlines will send a chauffer, others might send a chopper, but either way, flying first-class culls the boring bits of air travel. For instance, as British Airways recently told us, flying first-class out of London with them gives you exclusive access to the airline’s First Wing, which features a private check-in area leading through to dedicated security lanes, which grant customers direct access to British Airways’ prestigious First Lounges.

It gives you a license to be helpless

How so? Well not only do you get access to Heathrow’s Galleries First Lounge and The Concorde Room, which is exclusive for First customers and provides work and entertainment zones, waiter service dining (before some flights) and a la carte menus with a wide range of champagnes and wines, but you also get a dedicated help desk called You First for any queries regarding Concorde room facilities, Elemis spa treatments or any other travel queries.

It gives you a license to be messy

As we mentioned earlier, with the proliferation of Tweet-happy journalists and impertinent Instagram addicts, first-class flyers, from unicorn startup owners to international diplomats, can sprawl back without being judged for skipping straight to the sports page of their newspapers or for their remarkable ability to sink whisky and salted peanuts.

The entertainment is better

As British Airways recently told us, they are now exclusively trialling a new virtual reality headset where customers travelling on select flights in First from London Heathrow to New York JFK will be able to enjoy a selection of award-winning films, documentaries and travel programmes in 2D, 3D or 360° formats. While this is yet to be rolled out everywhere (and while it is specific to BA), we have noticed everyone from Etihad to Emirates have their own equivalent ‘level up’ entertainment systems for first-class flyers.

It gives you more leisure time

While business-class gives you this too, we’d argue you get an even better night’s sleep (so long as you don’t fall into the Adrian Wooldridge trap) in first-class, which can save you days of jetlag.

Hedonism rewires your brain; in a good way

While the scientific jury is still out on this, studies have shown hedonism can be good for your health and – though we’re hardly psychologists – we’ve found there are few problems that can’t be solved by swilling a punchy single malt at 40,000ft.

The only problem is when you wake up to find your solutions are gibberish. But hey: that’s a problem for another day.