For savvy flyers, a hidden economy section on Qatar Airways’ A380 upper deck provides business-class feels for a cattle-class price. 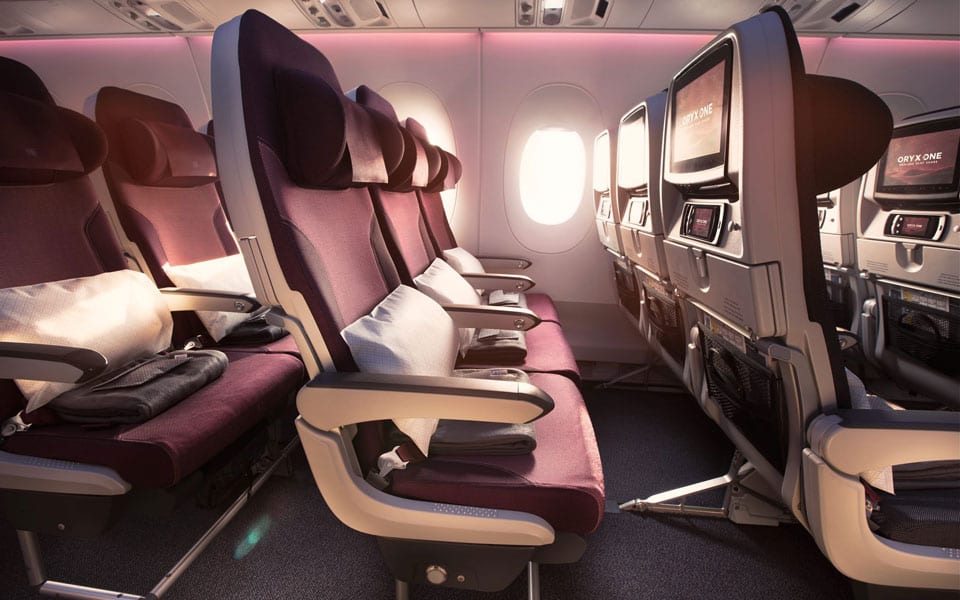 We’d all like an upgrade for free, but – on most airlines – that is never going to happen. Enter: Qatar Airways’ A380, the world’s largest passenger jet (and the backbone of the Sydney-Doha route) which harbours a little known economy compartment at the back of the upper deck, which smart cattle-class passengers can pre-select for free.

This retreat-like economy section comprises of just eight rows, and is located directly behind the first and business class cabins on the A380’s upper deck, enabling you to escape the Great Cattle Class Crunch of the other 43 rows of economy downstairs.

Not only does it give you Pointy End feels for a hunched-knee price, but it is also perfect for couples who are sick of being split up by snoring armrest hogs.

Why’s that? Well this upper deck economy section has a different seating configuration to downstairs: up here you’ll be sitting pretty in a 2-4-2 layout (thanking your lucky stars you’re not sitting tight in the main deck’s 3-4-3), which means that – as long as you don’t book yourself into the middle section – you are guaranteed a seat next to your partner, with no armrest problems (other than ones of your own making).

Even better, the upper deck is a much quieter part of the plane, with just 23 rows of passengers in total, eight of which are economy, 14 of which are business and two of which are first, giving you the benefit of one of the most coveted aspects of a Pointy End ticket (peace and quiet) bundled in for free with your economy seat.

The A380 being the world’s largest passenger jet, in our experience, while Oneworld or Privilege Club members may get first dibs on a true upgrade, non-priority passengers can almost-always pre-select one of these business-esque economy seats for free, providing they don’t choose an exit row.

While some passengers have expressed concerns that being at the back of the top deck means you have to wait slightly longer to get off on arrival, considering the marked difference in ambience (and flight attendant attentiveness) between the upper deck and the lower deck, we reckon it’s well worth the trade-off.

Oh and the jury is still out on the whole “getting off late” rumour too, with one Tripadvisor commenter posting the following (in response to said concern):

“I much prefer these seats. It’s a smaller, quieter cabin and the service is always good (perhaps there’s a better crew/passenger ratio). As for disembarking – on the Doha – London route upper-deck economy passengers disembark forward through business class so it’s usually quicker than economy below. For embarkation you board first as you must walk the length of the lower deck and up the stairs to access the economy upper deck cabin.”

If you’re looking to get your derriere into this compartment, book yourself a flight on one of Qatar Airways’ A380 jets, and get pre-selecting.

Doha (or for that matter, Europe, Russia, America, Africa, or any of the various other destinations Doha is a springboard to) is calling…