Don’t try to drink your ticket price in champagne. 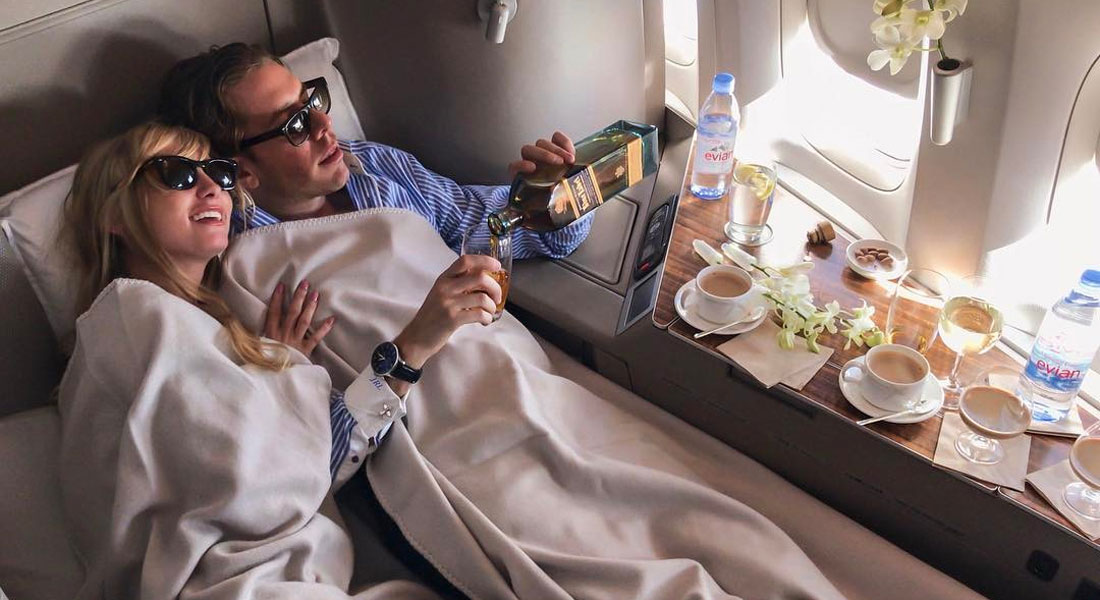 Master troll @justinrosslee showing us first-class etiquette at its finest.

Lusted after. Naughty. Hedonistic. Awkward? Your debut first-class flight is something you will never forget. However, considering all the etiquette rules (and your desire to make the most of it), flying first-class can be as stressful as it is exciting.

Fortunately for The Seriously Frivolous, (international) first class, in this day and age, across pretty much every airline, promises all the luxury you can imagine, with world-beating services competing to help make losing your first-class virginity – and all the first-class flights that follow – mind-altering and hitch-free experiences.

But at (up to) 20 grand a pop, and with so many airlines now offering their own versions of first-class, you want to be certain that you are ready for your first class experience, to eliminate any worries that your mirth-eyed chauffeur or in-air butler are laughing at your barbaric business-class habits behind your back.

While the various video walk-throughs of different airlines’ first-class offerings provide sneak peeks, you’re hardly trying the whole thing for size, and – though it may be pleasing on the eyes – neither are you learning about the first-class etiquette rules that many business-class travellers are unaware of.

Enter: this guide. Researched from positions supine as well as hunched (insert keyboard emoji here), here are all the etiquette rules you need to know before being bumped up to first-class.

So: avoid the Old Money sneers and have yourself a damn good time aboard whatever creme-de-la-sky takes your fancy, all with this guide.

Don’t brag about how good it is

If your airline doesn’t serve Hibiki 21 🥃, can it really be called “first class”? . . For the finest of everything in the sky, fly @allnipponairways_official , Inspiration of JAPAN™

It may be a business class rite of passage to take the ‘obligatory’ champagne selfie or to broadcast your boarding pass to all your followers, but when you fly first-class you are expected to be a bit more subtle.

This point is doubly important in the airport, where not only will other first-class passengers judge you, but literally everyone in earshot.

Oh and if you are going to brag, at least make it a humblebrag.

Don’t order everything on the menu

This one’s more for you than for your compatriots (given the private nature of most first-class suites, no one will judge your food consumption except the flight attendants), but if you do feel the need to go over the top in your indulgence, then expect to feel the consequences when you land.

As Adrian Wooldridge, political editor of The Economist once wrote, “upgrades are… an invitation to dangerous self-indulgence.”

As he once admitted in 1843 (The Economists’ sister magazine), Cathay Pacific first-class once tempted him into “the full six-course menu, which started with caviar and vodka and culminated via various Far Eastern detours with stilton and other cheese.”

Remember: you have paid to be pampered, not to be a jerk

However, even though you may have dropped a small fortune on your ticket, that does not entitle you to bully the staff as unfortunately there’s no code word (and no escape) from your antics at 40,000ft.

RELATED: The Most Embarrassing Habit Of First Class Flyers, Revealed By An Industry Insider

Don’t: spend the entire flight ripping pages out of a newspaper. Don’t break wind (silently or otherwise). And please don’t take your make up bag to the bathroom and stay there an entire hour.

Rich people have kids too… and rich kids cry too. While you might be tempted to write an internet diatribe arguing for them to be banned from premium classes, until that day you just have to accept that rules are rules, and that you will expose your lack of first-class experience by complaining about it.

Besides being potentially dangerous (not to mention illegal) it’s also annoying. Even if you think you can control yourself, even leaving a tiny likelihood that you will disrupt other people’s flight is really not cool.

Keep your shirt on at all times

Hold your horses: you’re not in that infinity pool yet.

Change into your pyjamas in the bathroom

While it might be (mostly) acceptable to engage in a spot of mid aisle yoga to get your pyjamas on in business class, once you get to first-class you may as well make use of the more spacious bathrooms and change in privacy.

Again, this should really go without saying, but as last year’s spate of first-class thefts revealed, it still needs to be said.

Again, you wouldn’t expect this to be a common occurrence, but in July 2017, as Traveller reported, a crazed First Class passenger had to be subdued after he tried to open the emergency exit hatch, punching a flight attendant in the process.

This came after 2015’s ‘nutgate,’ an incident which involved a female First Class passenger becoming enraged after she was served Macadamia nuts in a packet rather than on a plate, assaulting crew members and demanding that the plane be re-routed to get rid of the ‘offending’ flight attendant.

A couple is ok, but turning your suite into a recording/photography studio or live blogging is just annoying for everyone.