Johnny Depp, the 57-year-old Hollywood legend best known for his leading roles in Edward Scissorhands and Pirates of the Caribbean, is having a particularly rough week.

The American actor has been dealing with an ugly court case in England, taking News Group Newspapers, publishers of The Sun, to court over allegations that he physically abused his ex-wife, Amber Heard. The libel case has been a rather nasty exercise with a lot of airing of dirty laundry… Some of it quite literally.

Understandably, when you’re trying to defend your reputation, your outfit might not be the first thing that’s on your mind. Depp’s previous courtroom look, arriving at London’s Royal Courts of Justice in a baggy navy suit and chunky shoes, revealed how preoccupied he must be – the normally dapper Depp looking like a ratty teenager wearing a suit for the first time.

Perhaps revealing how he’s feeling about the unfolding case, Depp turned up (on Friday) to day 4 of the case re-energised with a much more flattering fit, which shows how it doesn’t take much to turn a losing look into a winning one. 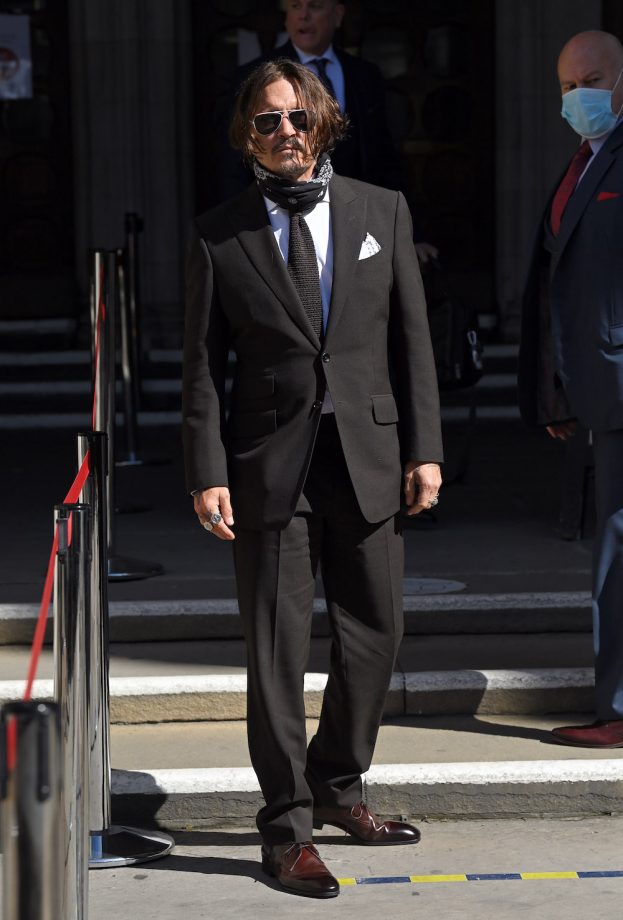 The suit seems to be almost identical to the navy suit he wore previously – same ticket pocket, same large lapels, same pocket square, even a similar cut. Yet this suit is far less baggy. His trousers are less creased and his blazer fits nicer. The black suits Depp much better, too.

The accessories are also more considered. Depp wore the same tie and scarf with his navy suit, using the scarf as a makeshift anti-coronavirus mask. (Looks much better than PPE, that’s for sure). The colour coordination elevates the accessories, making them look far better in this ensemble than they did with the navy suit.

His shoes, too, are far nicer on the eyes. The treatment on the leather is beautifully rich and invoke just enough character without coming off as dishevelled, as opposed to the brothel creeper-looking things he was spotted with previously.

Depp’s fashion turnaround demonstrates how much of a difference even small adjustments can make to your outfit. A different colour, different shoes – and a different attitude – can turn a fashion fail into a success.