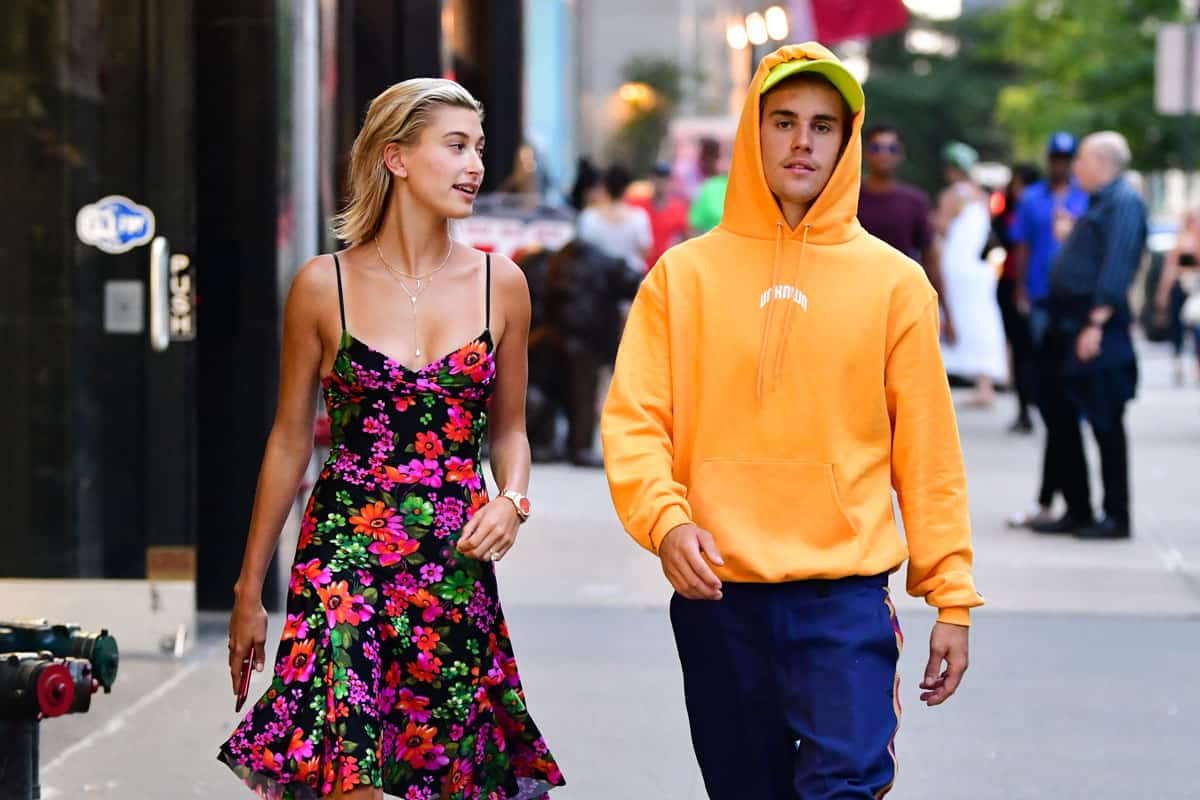 Justin Bieber may be many things. An iconic singer, a budding fashion designer, a happy-clapper… One thing he is not, however, is a fashion stylist, as his latest Instagram video underscores.

Currently enjoying a road trip across the United States with his wife Hailey, the Canadian singer seems to be living the life of Riley. They’ve been taking some time off to refocus on their marriage, as well as escaping the hellscape that is COVID-19, no doubt.

Bieber recently released his fifth studio album, Changes, which has been going gangbusters on the charts. Perhaps it’s that musical success that’s inspired him to get yet another Lamborghini… And maybe he’s still in holiday mode, which would explain his low-key fashion choices.

Earlier this afternoon, Justin shared a clip, filmed by Hailey, of the two enjoying a joyride behind the wheel of a bright yellow A$425,000 Lamborghini Huracán Spyder. Blasting Drake and DJ Khaled’s latest single POPSTAR, Hailey can be seen in smart casual garb with a Rolex Datejust while Justin’s wearing a baseball cap, hoodie and trackies.

Drake featured on fellow Canadian Justin’s track Right Here from his third album Believe (Drake was also in the music video for Bieber’s infamous 2010 single Baby), and Bieber has also collaborated with DJ Khaled on songs I’m The One and No Brainer.

The juxtaposition of Hailey’s bling and Justin’s fancy whip with his somewhat slovenly appearance is remarkable, and more than a little infuriating. The man can dress well, but maybe he left his stylist back home.

Of course, the alternative is, Bieber simply does not give a f*ck what the paparazzi might think (which is fair enough too).

Biebs’ fans don’t seem to mind his overly relaxed style. Dig through the literally thousands of aspiring rappers and models asking for follows in the comments of that Instagram post, and you’ll find a comment from fellow musician Jaden Smith gushing “this video is a movie.”

It’s not 100% clear whether the car’s actually Bieber’s, or if he’s just renting it. He actually got arrested in 2014 after allegedly drag racing a similar-looking yellow Lamborghini Gallardo in Miami Beach.

But the roadster’s not the real story here. A flashy sports car might seem impressive, but it’s got nothing on what’s definitely part of his fleet: a luxurious custom Prevost Marathon RV, which start at AU $2 million. It’s not quite as glamorous as a Lambo, but a hell of a lot more extravagant (and comfortable). Bieber shared a photo of the motor home earlier today, too, which lends more credibility to the renting angle.

Wearing a hoodie and trackies might be okay when you’re relaxing in your million-dollar RV, but it’s not the most appropriate thing to wear out on the town (unless you’re a multi-million dollar celebrity with a VIP pass). The hoodie’s one of Justin’s own creations – a signature piece from his Drew House clothing label, worth A$280. Mr and Ms Bieber often share photos of themselves decked out in Drew House apparel.

Promoting your own clothes makes sense, we just wish Justin released a button-up shirt alongside the swathes of baggy hoodies and t-shirts he’s putting out. Or maybe he’s just trying to appeal to the ‘slacker’ market (although with triple-figure pricetag hoodies, we’re not sure how successful he’ll be).