“Who made these – Robinson Crusoe?” 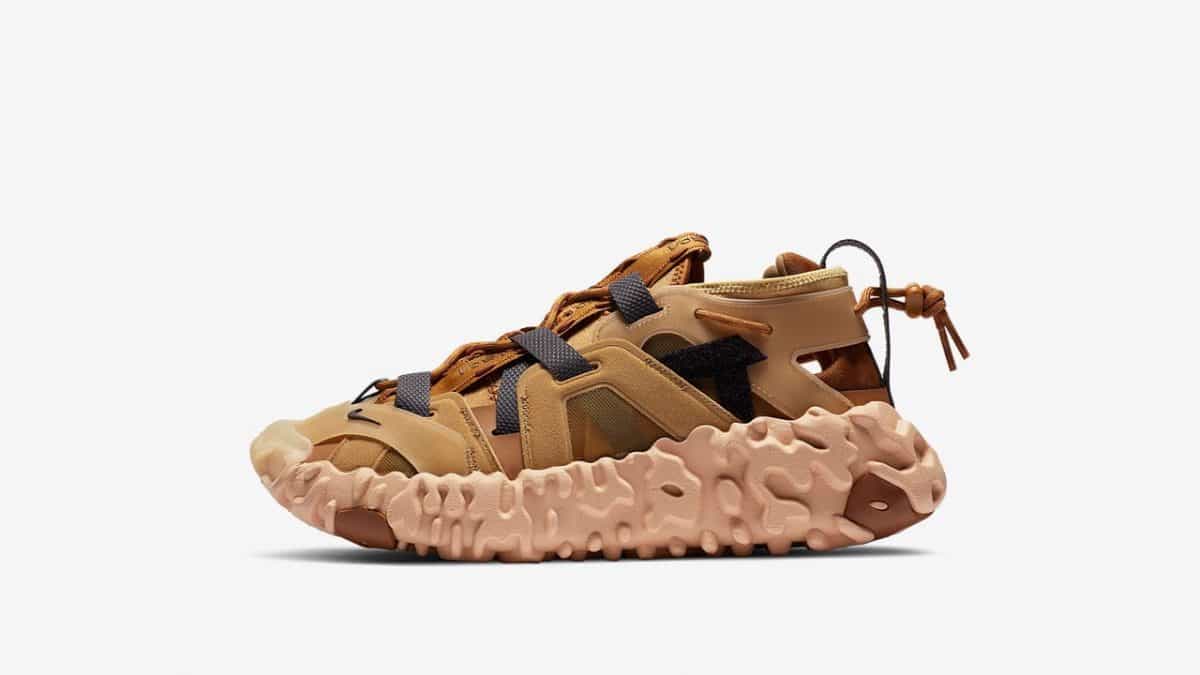 Sneaker culture is all about making a statement with what’s on your feet, as this latest release from sportswear giant Nike proves.

In recent years, we’ve seen the ‘dad shoe’ go from daggy to designer: chunky, comfortable sneakers like the New Balance 990 line or the Nike Air Monarch. Once considered the pinnacle of poor taste, ‘dad shoes’ have become cool now – although if you try and explain that to a real dad, you’ll get met with incredulity. Even high fashion brands like Balenciaga, Versace and Gucci have gotten in on the ‘dad shoe’ trend.

Now it seems like the next big trend is trail shoes worn as casualwear. In the same way that dad shoes’ functional aesthetic is so appealing, the minimalistic technical nature of trail runners or hiking shoes has attracted the attention of the young and beautiful. And Nike’s noticed.

Nike has come out guns blazing with a new trail runner-inspired shoe as part of their new ISPA line. Enter the ISPA OverReact Sandal: a shoe that might just be so ugly it’s actually beautiful.

Not quite a sandal, not quite a sneaker, these chunky monkeys are certainly divisive, to say the least. Like anything limited Nike puts out, they’re sure to sell like hotcakes, but not everyone’s on the ISPA hype train: commenters on Instagram coming up with gems like “if throw up was a shoe“, “love the treading in chewing gum look” and “who made these – Robinson Crusoe?”

Nike already has a technical trail running imprint called ACG (All Conditions Gear) but they’ve decided to really push the boat out with ISPA (Improvise, Scavenge, Protect and Adapt). Where ACG is focused on the great outdoors, ISPA is focused on “improving an athlete’s interaction with the built environment.”

ISPA’s sneakers combine aggressive styling with some of Nike’s latest product innovations, such as their new React foam technology that forms the OverReact Sandal’s chunky midsole. Nike should be applauded for pushing boundaries, but we’re not entirely convinced of the technical superiority of some of their gimmicks – take a look at their Road Warrior hightop, for example.

Techwear and outdoor gear have long had a place in mainstream fashion: Patagonia, The North Face, Arc’Teryx, Moncler, Kathmandu, Napapijri… The list goes on. Anoraks, pullovers and fleeces are all de rigeur in streetwear these days, but trail runners have historically been eschewed. Now, technical footwear brands like Salomon, La Sportiva or Danner are coming into vogue, and the sportswear giants want in on the action.

Nike’s not the only offender when it comes to apeing trail style like this: Adidas has been riding the gravy train that’s been Kanye West’s Yeezy sub-brand for years, which regularly puts out shoes that look like a bizarre combination of trail runners and alien vomit, like the Yeezy Boost 380 ‘Blue Oats’ that dropped last week.

Let’s not be so quick to dismiss these experimental offerings, however. These radical sneakers play an important role in the development of fashion as well as athletics: these limited models are testbeds for new technologies that diffuse down into more mainstream runners.

Nike’s React foam is commonplace on their ISPA and high-end sneakers, but will eventually filter down to more accessible models. Adidas’ Boost foam was first showcased in Yeezy models before appearing in shoes at lower price points. What seems outlandish now might become commonplace in a few years’ time: sure, the OverReact Sandals might be ugly to some, but to others, they represent an exciting look at the future of footwear.