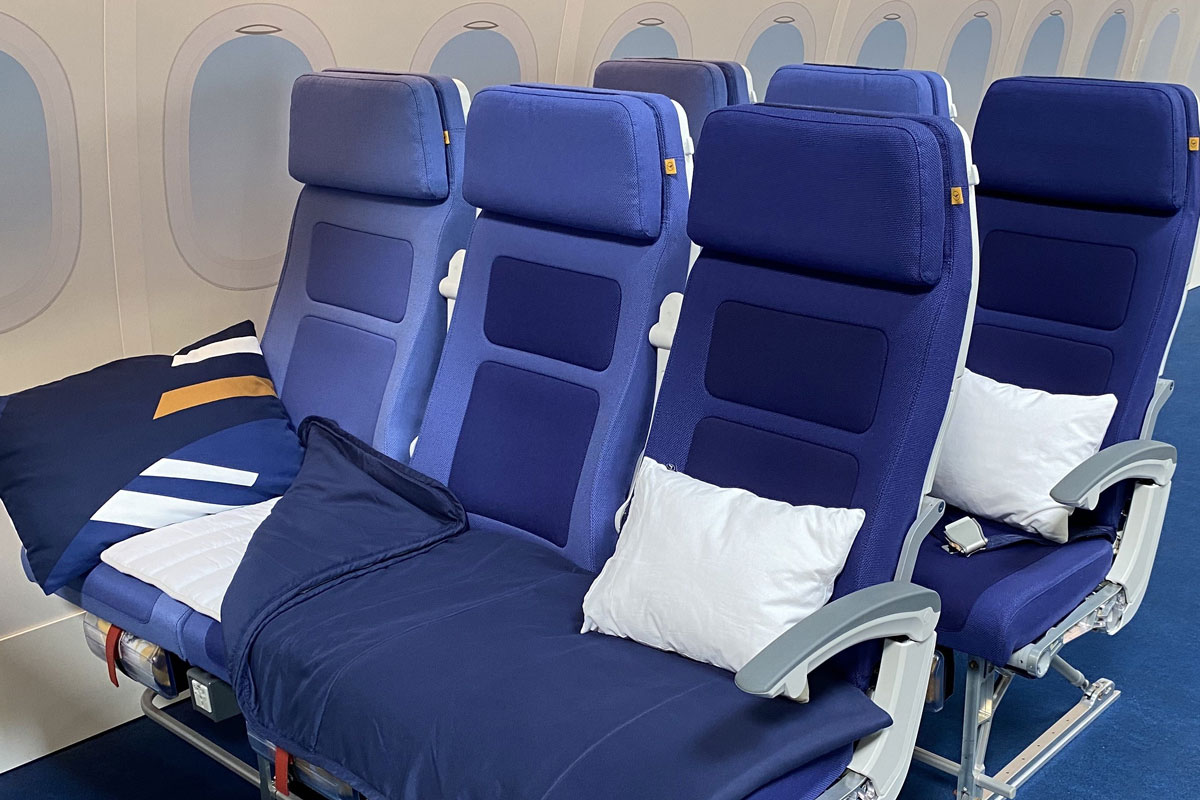 2020 has been ripe with innovation. From futuristic formula one seat designs attempting to revolutionise business class to skeletal economy seats purporting to solve ‘legroom rage’ it’s been a whirl.

That’s before we mention the double-decker economy seats potentially ready to make germaphobes’ dreams come true, and the touchless travel trend. Suffice to say: there have been more new inventions and designs reported on than you can throw a plastic shield at.

The phenomenon doesn’t appear to be slowing down, with Lufthansa now looking to make better use of its existing amenities (and the lower levels of demand now seen in the skies) to solve arguably the most stressful part of economy flying.

Think it’s not being able to sleep? Think again.

We’ll put the stress point like this: imagine walking into the depths of cattle class on a late-night flight. You’ve just flown from London to Dubai, have waited two hours in the airport, and are now boarding your second flight to Sydney. You walk onto the plane, all the way to the back. All is dark, and there are three or four completely free rows.

Who gets them? The first to throw off their seat belt and claim them once you’re at cruising altitude, of course.

It’s a bitter race, with some attempting to steal away these coveted seats from the very start (and often but not always being told to return to their designated seats by flight attendants) and others sharpening their nails and stretching their legs, limbering themselves up for the ‘seatbelt sign off’ dash.

This moment of madness on Lufthansa may soon be a thing of the past.

“The German airline is trialing its new Sleeper’s Row concept on its Frankfurt, Germany to São Paulo, Brazil flights from November 18 to mid-December,” CNN reported on Saturday.

The concept? You’ll now have to pay for what you used to fight over for free. But at least you’ll be able to guarantee it.

“The idea is passengers traveling in economy can nab a row of three to four seats, and then stretch out across them, replicating the experience of a lie-flat business class bed. Travelers will be given a blanket, pillow and seat topper to maximize the comfort, and also offered priority boarding,” CNN reports.

“Those interested must purchase the upgrade at the airport, either during check-in or at the gate, for $260 [USD] on top of the price of their original ticket.”

Lufthansa isn’t the first airline to try this. Air New Zealand launched its Economy Skycoach – a similar premise – in 2011 and “Airbus premiered its Settee Corner concept, which takes the economy three-seat-configuration as the inspiration for a lie-flat, sofa-style luxury seat that would take up less space — and weigh less — than the average Business Class seat” in 2019, CNN reports.

On top of that, earlier this year, Air New Zealand took this economy lie flat bed concept to new heights, filing patent and trademark applications for the Economy Skynest invention which – if commercially implemented, would see economy passengers able to rent the ‘Skynest’ pods to sleep in by the hour.