“This is why we don’t do surprises anymore.” 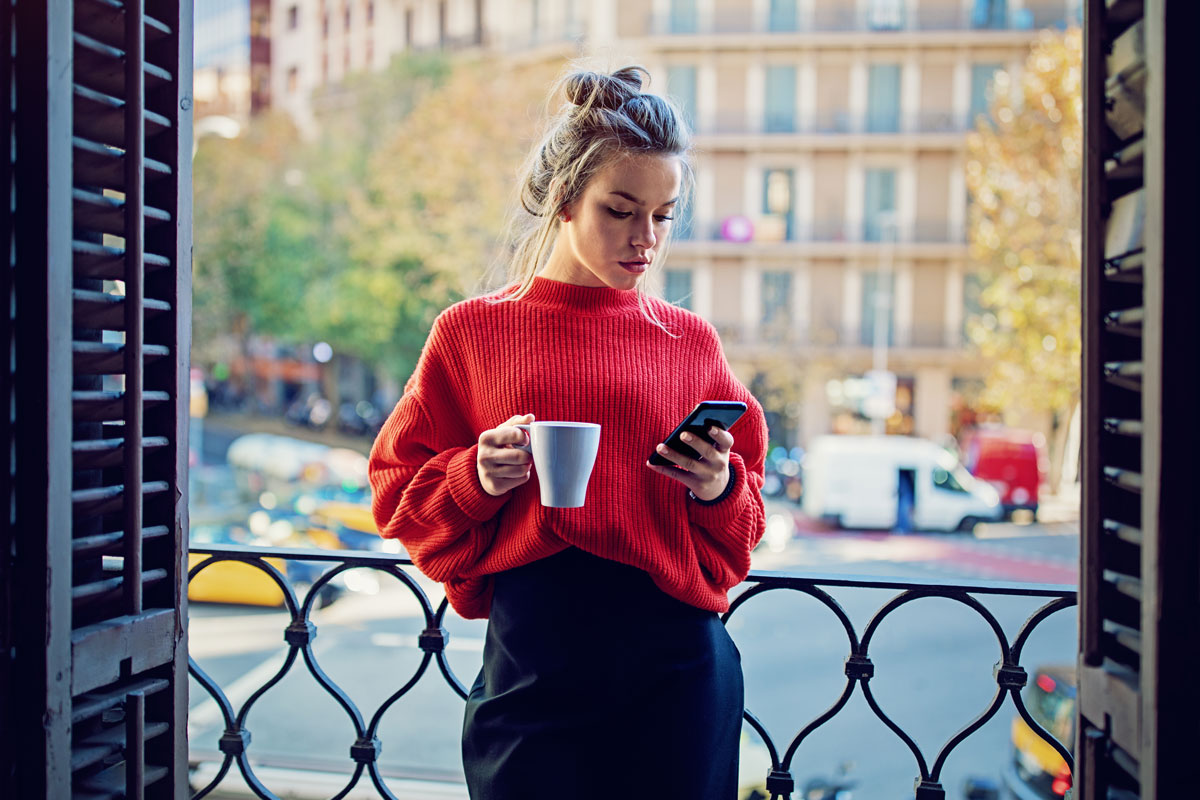 Paris is known as the city of amour. But tragic things have happened there too. From Marie Antoinette’s gruesome end to tourists inhaling entire baguettes before lunch, atrocities still happen to this very day. A yang to the city’s ying, if you will.

Speaking of polar opposites, one Paris tale, which went viral in January, recently gave the internet a “thank god it wasn’t me” moment.

Happy 4 year anniversary to when I flew to Edinburgh to surprise Finlay and he flew to Paris to surprise me and this is why we don’t do surprises anymore pic.twitter.com/ZBJ4jCNZ4i

A Scottish man, Finlay McAfee, flew to Paris, from Edinburgh, in January 2017. But it didn’t turn out as romantic as he hoped.

Rather than surprising his girlfriend at the airport, who was on her way back to Edinburgh from Beirut, with a 12-hour stopover in Paris, it turned out to be quite an expensive error.

McAfee, a 23-year-old student at Edinburgh University at the time, told CNN Travel that his plan was to surprise his girlfriend, the then 21-year-old Salma Saade, at Charles de Gaulle airport.

But, “Little did McAfee know that just as he boarded his Edinburgh to Paris flight, Saade was already landing in the Scottish capital,” (CNN Travel).

“Turns out, she’d switched to an earlier flight, with the same goal: to surprise her partner and be reunited a day earlier.”

The couple had actually been transiting through Edinburgh Airport at the same time.

The tale drew the sympathy of the internet, with various Twitter users showing solidarity – and pointing out it could have been a lot worse.

“I don’t mind this kind of surprise,” one Twitter user wrote. “The one I got was that the person I went to surprise, surprised me by lavishing attention meant for me on some other person.”

“Possibly a case of mistaken identity. That’s what I told myself as I cried all the way back home.”

All’s well that ends well, however, and that appears to be the case with Saade and McAfee, who, CNN Travel reports, “are still together, now living in London where McAfee is a software engineer and Saade works for the Scottish National Party.”

Reflecting on their now-viral tale, McAfee told the travel news arm of CNN, “We’d only been going out for three months,” while Saade added, “It was our first time apart.”

“We really missed each other.”

The monumental mistake (now heart-warming icebreaker) was discovered when Saade got home from the airport and texted McAfee’s roommate, to see if McAfee was in, to come around to his place and surprise him. 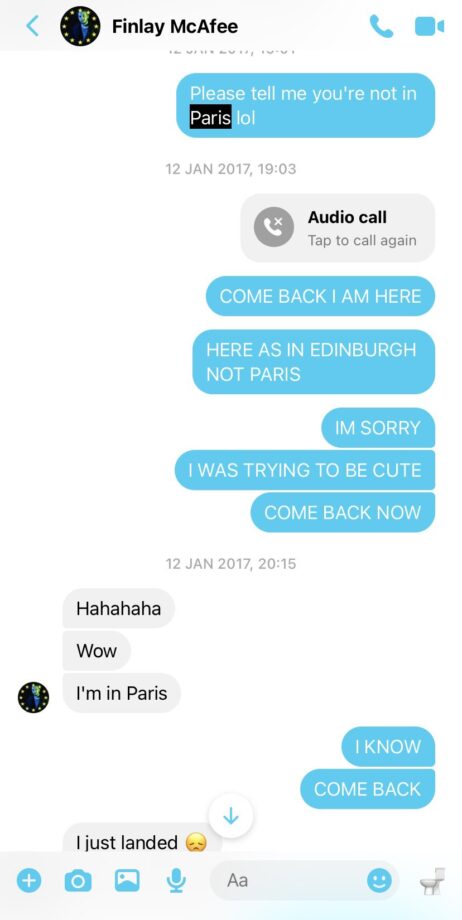 “Hey Adam do you know if Finlay’s in the flat by any chance?” Saade asked.

“Lmao he just flew to Paris.”

McAfee then spent a morose day in Paris on his own, then headed back to Scotland. 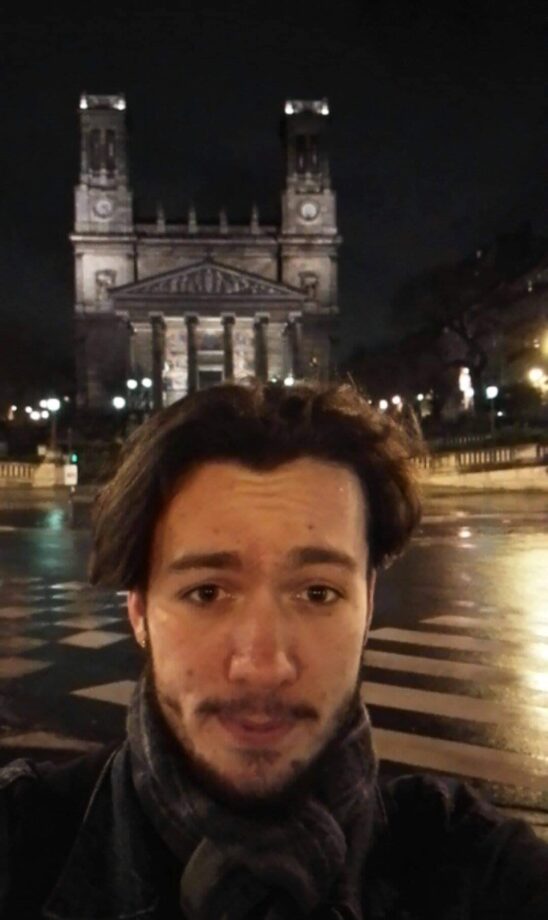 When he posted his experience to Facebook, some friends were sympathetic, others sardonic. 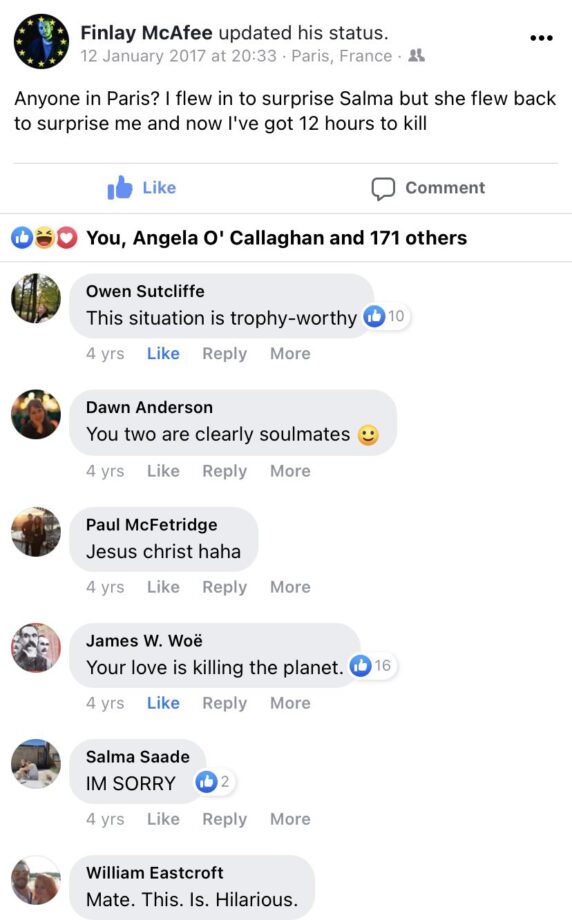 Other viral tales of high flying antics that have emerged over the years show that such gestures don’t always end in calamity.

As The Mirror reports, “A devoted boyfriend stunned his girlfriend by flying almost 4,000 miles to propose to her,” back in 2017.

“Lauren Lucille, from Perrysburg, Ohio in the US, was nearing the end of her month-long trip around Europe when romantic Tom Jacoby surprised her at London St Pancras station,” The Mirror reports.

“Tom, who travelled 3,816 miles from Perrysburg, visited her in Europe to pop the question.”

Flying across the world to surprise your partner has also become quite a popular stunt on Youtube (or it had, anyway, before the arrival of The Bat Kiss).

In this age of coronavirus the loved up duos of the world are having to improvise to even greater lengths to keep the spark alive and to make new connections, with New Yorkers asking each other out by drone and interpretive dance, and Australians broadening their horizons in their search for love.

Given the new bureaucratic and logistical challenges of travelling, which have come as a result of the current pandemic, we doubt we’ll hear any more tales like this any time soon (experts are predicting a return to pre-Covid levels of travel in 2024).