A metaphor for life? 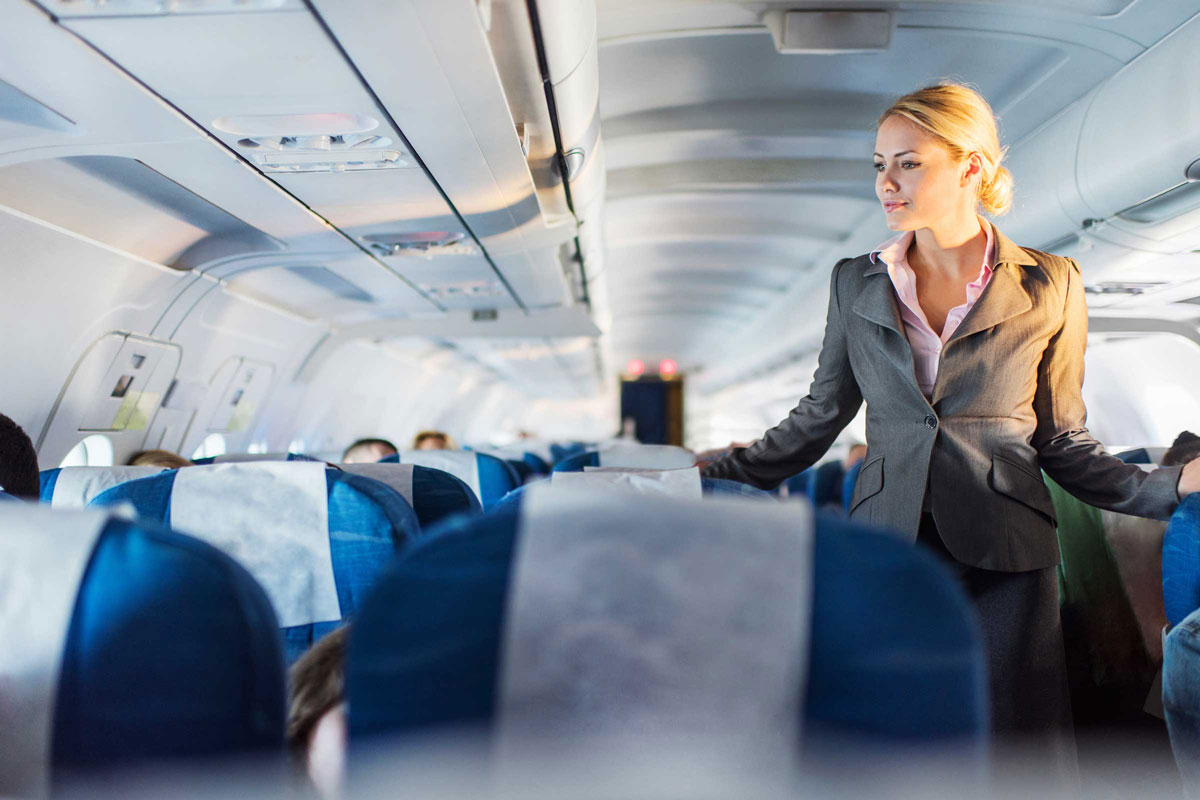 Flight attendants are the angels of the sky. The grease that keeps the aviation universe spinning. A crucial cog in the machinations of an A380. A godsend. But they have officially had enough – they are tired of our ‘guardian angel’ complex.

Judging by the latest developments across the pond, it would seem rules and regulations are finally catching up to their disgruntlement (if fortuitously, not directly in response to it).

This came after US airlines banned more than 2,000 travellers for refusing to follow mask requirements.

Though bad behaviour in the skies is by no means a new phenomenon, statistics show that – in the US at least – it has become more frequent.

According to CNBC, “From January through the end of November, the latest available data, the FAA pursued 108 enforcement actions for such behaviour. That put it at a rate of 3.1 per 10 million enplaned passengers on U.S. airlines, double last year’s rate and the highest since 2004.”

The result? The FAA in January announced it would drain travellers’ bank accounts to the tune of (a maximum of) $35,000 for unruly behaviour, instead of a usual warnings procedure.

As one flight attendant anonymously told media, crew are tired of playing “babysitter for adults.”

Boston.com reported that the stricter policy would be in place until March 30th.

We’re now in April. And in the wake of this extra heavy fine dissipating, there is an important flight attendant rant we reckon every man should hear.

Deep from the archives of Flyertalk – an Internet forum for discussion of airline frequent-flyer programs, hotel loyalty programs and other issues related to air travel – the rant comes from 2016, and is more relevant than ever.

I’m sure it has nothing to do with the job being sexualized for decades (and still). https://t.co/RAhULLx9aZ

Inspired by an article detailing apples kissed by flight attendants being sold for $20 and an article discussing why men fall in love with air hostesses, the author – travel writer and air hostess Sarah Steegar – takes to her keyboard to share her thoughts.

“While the article’s theory is that flying makes men feel vulnerable and flight attendants offer a sense of control (I suppose that could be a part of it), I just can’t help but think of stories and images like this one,” she writes, linking to an image of a flight attendant kissing an apple.

“The sexualization of the job by the airlines may have passed its peak in the U.S., but it’s still kicking internationally and in passengers’ collective imaginations. Our companies may not be allowed to exploit so directly, but there are less direct ways – i.e. via the stories and images permitted at some other carriers.”

“Remember Richard Branson openly insisting on the red shoes for Virgin’s female flight attendant uniforms to ‘sex up’ the brands? How about the fact that many of British Airways’ female crew only recently won the right to wear slacks? The first few times I mentioned ‘flight attendant’ on Twitter I got a slew of, ahem, interesting followers.”

“Meanwhile, it didn’t escape my attention that the ‘men love flight attendants’ article still referred to us as ‘air hostesses.’ I’m not offended, but it’s a bit old-fashioned for their modern theory. I also noticed that the article’s romantic examples are limited to what can be summed up as ‘sometimes male celebrities end up with flight attendants.’ There isn’t any input from regular guys, so the article doesn’t convince me much.”

“When I think of the women that male celebrities would categorically go for, it’s not usually about those who make them feel safe when they’re vulnerable. Unless that’s what Victoria’s Secret models do for them, too?” 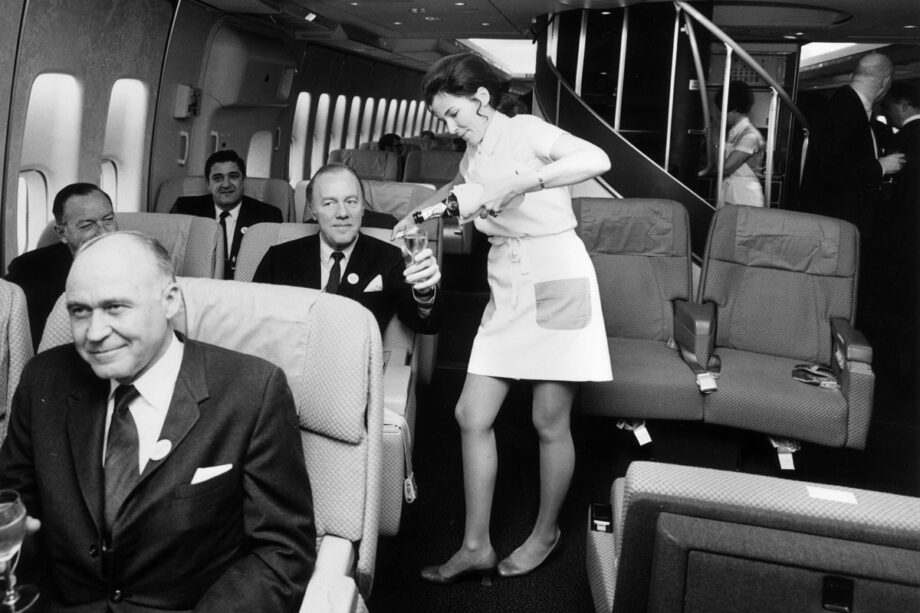 A Pan American (Pan Am) airhostess serving champagne in the first class cabin of a Boeing 747 jumbo jet. Image: Getty.

“Don’t think I’m totally cynical. I think the celebrity/flight attendant pairings are ultimately about the fact that our job gives a rare opportunity for extended one-on-one mingling in what is, for a celebrity life, a circumstance in which they are treated rather ‘normally.’ That can be attractive in itself. But when it comes to the claim that men in general ‘love to fall in love with flight attendants,’ sure, I’d prefer to think it’s about our reassuring presence in the midst of vulnerable situations.”

“However, what actually comes to mind is the fact that some men would pay good money for old food I’ve kissed based solely on my job.”

While we’d question what is wrong with parting a fool from his money, the rest of her points are hard to argue with.

According to Tornos News, psychologist Judi James thinks men put flight attendants on a pedestal due to a “feeling of helplessness” they feel when they fly, which makes them vulnerable to people paid to look after them.

James, Tornos News claims, told MailOnline Travel: ‘When people fly they are in a state of helplessness – they leave all their ability to control at check-in and this makes them vulnerable and dependent.”

“They might also be anxious or scared of flying so the hostess becomes a method of support and reassurance, you just have to sit back and let them take care of you.”

“Because you are helpless and they are taking control of your life, this creates feelings of love and dependency, almost a parental feeling.

“It’s the same reason that some patients fall in love with doctors and psychiatrists.”

If you want to keep in a flight attendant’s good books, Smarter Travel recommends you be nice (“a kind word goes further than most passengers will ever know”), self-sufficient (don’t be “that person who boards the plane, finds his seat, and then blocks the aisle arranging everything he needs”) and take out your earbuds when they are trying to talk to you (or serve food).

A microcosm of life in general? You be the judge.