Despite having made a career out of playing tacky characters, Sacha Baron Cohen is one remarkably dapper gent.

The 49-year-old British comedian, best known for playing confronting satirical characters like Ali G, Brüno Gehard and Borat Sagdiyev, is known for his insane commitment to his roles – so seeing him out of costume (as his least well-known character, himself) can be a bit jarring. What’s even more disconcerting is that when you strip away the facade of bad taste, you find out that he actually has exceptional taste.

Take this outfit he was spotted in strolling the streets of Sydney last week with wife Isla Fisher. Keeping things lowkey in a fedora-topped, smart casual look, it’s hard to think this is the same man who’s famous for wearing a mankini in the movies. Even more impressive was the watch he had on his wrist – a brand-new OMEGA Speedmaster Moonwatch Professional (ref. 310.30.42.50.01.001) that even his harshest critics would agree is a timepiece that’s out of this world. 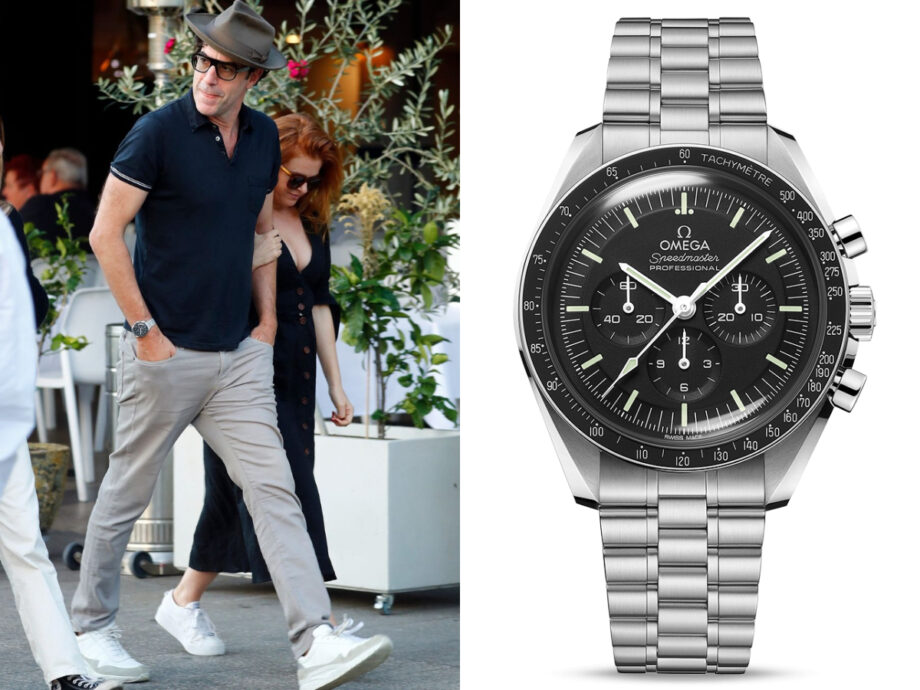 While there’s a million and one different variants of the famous Moonwatch (also called the ‘Speedy’), Cohen’s example is clearly recognisable as being a 2021 model thanks to its bracelet, which features a five arched links per row design, as well as its compact, somewhat rounded case design. This Speedy features OMEGA’s new Calibre 3861, which unlike previous Speedy movements meets Master Chronometer specs – the highest standard of precision, performance and magnetic resistance in the Swiss watch industry.

RELATED: OMEGA Gives Its ‘Moonwatch’ A Much Anticipated Upgrade

The OMEGA Speedmaster Moonwatch in all its guises is one of the most iconic and best-regarded watches in the known universe, so Cohen clearly knows what’s up. Although the moon association does bring to mind the rather less salubrious ‘blood moon dance’ scene from Cohen’s latest film, the much-anticipated Borat: Subsequent Moviefilm…

2021 has seen Cohen garner a number of accolades for not only the aforementioned Borat sequel but for many of his other filmic works. Cohen won the Golden Globe Award for Best Actor – Motion Picture Musical or Comedy for his reprisal of the infamous Kazakh TV host, with the film also picking up the Golden Globe for Best Motion Picture – Musical or Comedy as well as the Writers Guild of America Awards Best Adapted Screenplay.