Australia’s latest COVID outbreak has demonstrated yet again why getting everyone vaccinated is crucial to getting back to normal – and avoiding the need for lockdowns.

But while we haven’t – fortunately – had as urgent of a need as other countries to get the whole population vaccinated quickly, unfortunately, thanks to our success in keeping community transmission of COVID in Australia very low, we now risk becoming victims of our own success.

Though authorities are cautiously optimistic the current lockdown measures can bring the Sydney situation back under control without the need for further extending the lockdown, if this Delta variant were, for whatever reason, to spread out of control, Australia would be in a very sticky spot, given what a small percentage of our population we have fully vaccinated against COVID-19.

Even if that doesn’t happen, in the meantime, for as long as so few of us are vaccinated, every time there is a flare-up, small businesses will take an economic blow, and individuals will have to endure lockdowns, and we will have to remain separated from the world.

A survey conducted by DMARGE last week, however, suggests many Australians between the ages of 20 and 50 are currently holding off on getting the jab. Of those who took part in our survey, 41% responded “too dicey” when asked if they would be getting the AstraZeneca vaccine. 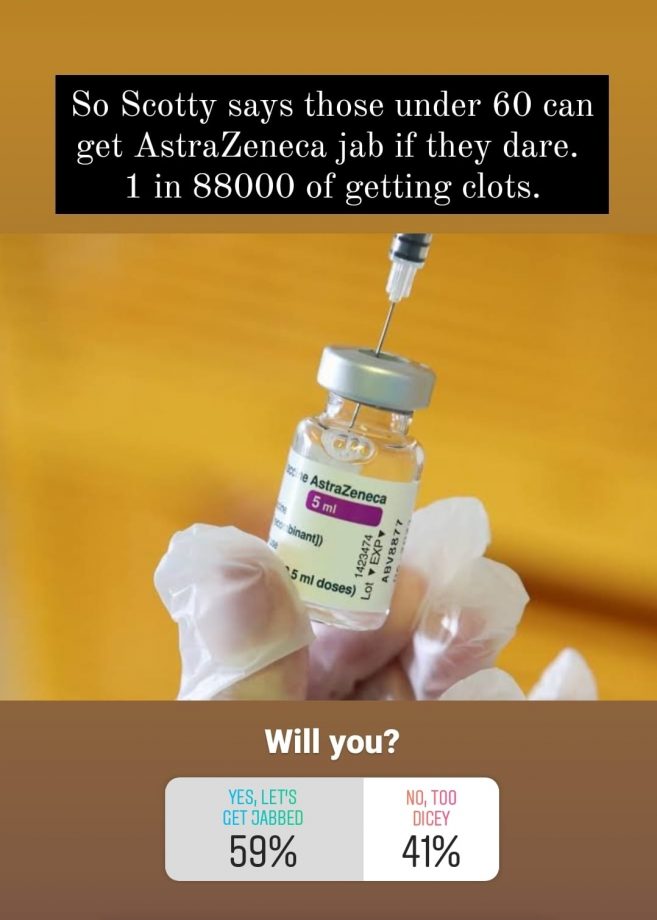 We asked this question after Prime Minister Scott Morrison caused a stir by telling reporters any Australian adult could go to their GP and request the AstraZeneca vaccine last week.

“If you wish to get the AstraZeneca vaccine, then we would encourage you to go and have that discussion with your GP and we’ve already made announcements to support those additional consultations with GPs so you can have that conversation,” Mr Morrison said in reference to a new no-fault indemnity scheme for GPs, of which details were scant when he made the announcement.

The Australian Medical Association (AMA) has welcomed the announcement of the scheme. It rejected, however, the idea that all adults might go and get AstraZeneca. The AMA president, Dr Omar Khorshid, said: “Our recommendation is still really for patients to follow the Atagi advice.”

“Be patient and have the Atagi-recommended vaccine when it’s available.”

The Australian Technical Advisory Group on Immunisation (Atagi) did not endorse Morrison’s statement. It continues to advise Pfizer as the preferred vaccine for people aged 16 to 60.

As the Australian Government Department Of Health’s website states, “The Australian Technical Advisory Group on Immunisation (ATAGI) recommends the COVID-19 Pfizer vaccine (Comirnaty) as the preferred vaccine for those aged 16 to under 60 years.”

Queensland’s Chief Health Officer Jeannette Young said the following when asked about Morrison’s remarks: “I do not want under-40s to get AstraZeneca.”

“It is rare, but they are at an increased risk of getting the rare clotting syndrome. We’ve seen up to 49 deaths in the UK from that syndrome.”

“I don’t want an 18-year-old in Queensland dying from a clotting illness who, if they got COVID, probably wouldn’t die.”

“We have had very few deaths due to COVID-19 in Australia in people under the age of 50 and wouldn’t it be terrible that our first 18-year-old in Queensland who dies related to this pandemic, died because of the vaccine.”

As the ABC reports, “Dr Young said she ‘genuinely did not understand’ why Mr Morrison had departed from the advice of the Australian Technical Advisory Group on Immunisation (Atagi).”

“We are not in a position that I need to ask young, fit, healthy people to put their health on the line getting a vaccine that could potentially, significantly harm them.”

She also said that despite the current lockdowns and outbreak fears, there are not (at the time of writing) enough cases to warrant young people charging forward to get AstraZeneca en masse.

“If I was the Chief Health Officer in Indonesia, I might be giving different advice.”

So, in light of all this, are young Australians over-reacting to AstraZeneca fears, or perfectly justified in being cautious?

Here are some statistics to compare.

The odds of getting a blood clot from the AstraZeneca vaccine are roughly 1 in 88,000 (though the younger you are the higher your risk).

Your odds of getting hit by a car (and dying from it), over the course of your lifetime, according to a US-based Statistica study, is 1 in 107.

It’s also important to remember getting a clot from the AstraZeneca vaccine doesn’t necessarily mean you’ll die. As the ABC reported in May, “Although early reports from Europe indicated approximately 20 per cent of cases of TTS were fatal, in Australia, to date, one out of 24 TTS cases has been fatal, so just over 4 per cent.”

Before you go spouting the graph above to your AstraZeneca-hesitant friends, however, consider the following. You might not want to read too much into those statistics (or, at least, be very careful about how you frame them).

Why? If you believe the side by side comparison we just made, you could easily come away with the conclusion young Australians are massively over-reacting to AstraZeneca fears.

But if you listen to the medical advice, especially for those under 40, the decision to wait for the Pfizer vaccine could actually be a perfectly rational move (though one that is constantly subject to changes in each individual’s context, and their society’s, and one you should ultimately decide by listening to your GP and Atagi).

On top of that, as The Guardian reported in April, Atagi’s Director of SAEFVIC (Surveillance of Adverse Events Following Vaccination in the Community) Nigel Crawford has said, comparing the AstraZeneca vaccine with car crash statistics, smoking statistics or the blood clotting risk of taking The Pill may not be helpful in boosting vaccine confidence.

“The contraceptive pill was associated with entirely different, less deadly clotting conditions, Crawford said, and it is known that smoking, being overweight and other factors increase the risk of those conditions which makes it easier for individuals to make decisions” (The Guardian).

“After assessing risk factors and benefits, many people decide they cannot go without contraception or driving a car, but in a country like Australia with no Covid circulating, people may feel it is more realistic to forgo the vaccine if they don’t get useful information about risk of severe clotting.”

“By comparison, CVST and splanchnic vein thrombosis appear to be ‘an idiosyncratic reaction’ for which there are still no clear risk factors, Crawford said.”

“We need to try to compare apples to apples.”

“And we need to go to our communication experts … to tailor the message about the risk-benefit to specific groups and outline how that might change over time. We need to have an important conversation about different strategies to try to explain what is a complex situation.”

In other words: if you don’t give people useful information, they might stop listening to your overall message, which would be a shame as the overall message here – get vaccinated – is crucial.

To help clear up some of the mixed messaging we’ve seen over the last few months we highly recommend watching the video below, where a man in his 30s asks the panel whether he should go and get the AstraZeneca vaccine, or wait for the Pfizer.