Many young talents who get their start with the Disney Channel have had a rocky transition into adulthood, to say the least – Mikey Cyrus, Orlando Brown, Shia LaBeouf… But the Jonas Brothers, are a notable exception to that rule.

While Nick, Joe and Kevin were inseparable as a boyband, they’ve since each focused more on their individual pursuits, only briefly reuniting in 2019. As adults, they’ve gone their different ways, but something they still have in common is an impeccable taste in watches, each boasting a rather impressive collection of their own.

But youngest brother Nick’s is easily the best – or, at the very least, the most lavish. The 28-year-old has a penchant for flashy, expensive numbers from brands like Bulgari, Chopard and Rolex, but his favourite piece is easily his rose gold Richard Mille RM11-01 Automatic Flyback Chronograph “Roberto Mancini”, which is worth a hefty AU$280,000.

When you consider that the average Aussie salary is about AU$60,000, that’s a lot of money. Must be nice to have something so expensive as your daily wearer. 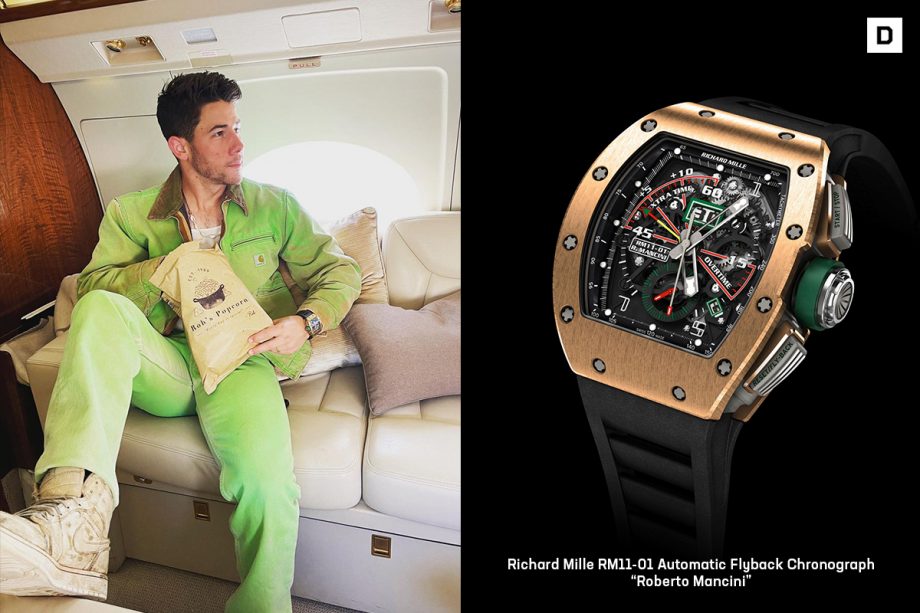 The flexing doesn’t stop there, either: check out this photo he shared earlier this week of himself kicking back on his private jet, wearing a lime-coloured Carhartt jacket and pants, distressed Air Jordan 1s and rocking the expensive watch. Talk about having plenty of green…

Roberto Mancini is the current manager of the Italian national football team and a former football great – this is his signature model and one of the most popular watches in RM’s lineup, even among those who don’t really care about football or Mancini (which is arguably the greatest compliment Mancini could get about the thing).

Appropriately, this watch is designed entirely around football. The watch’s unique flyback chronograph dial displays match time on the basis of two 45-minute halves, and up to 15 minutes of stoppage time. Pressing the pusher at 4 o’clock once actuates the flyback function and repositions the hand at 12 o’clock, ready to start the second half – if extra time is awarded, the flyback function can be reactivated so that the watch shows the 15 minutes of extra match time and up to 5 minutes of stoppage time.

Jonas’ model’s distinctive tonneau-shaped case features rose gold top and bottom ‘wings’ which sandwich a titanium centre flange. Like most RM watches, the watch is primary constructed out of titanium and features an eye-catching skeletonised movement. Despite its large 50mm case diameter and rose gold elements, it’s a light and comfortable thing to wear – perfect for a globe-trotting musician like Nick Jonas. 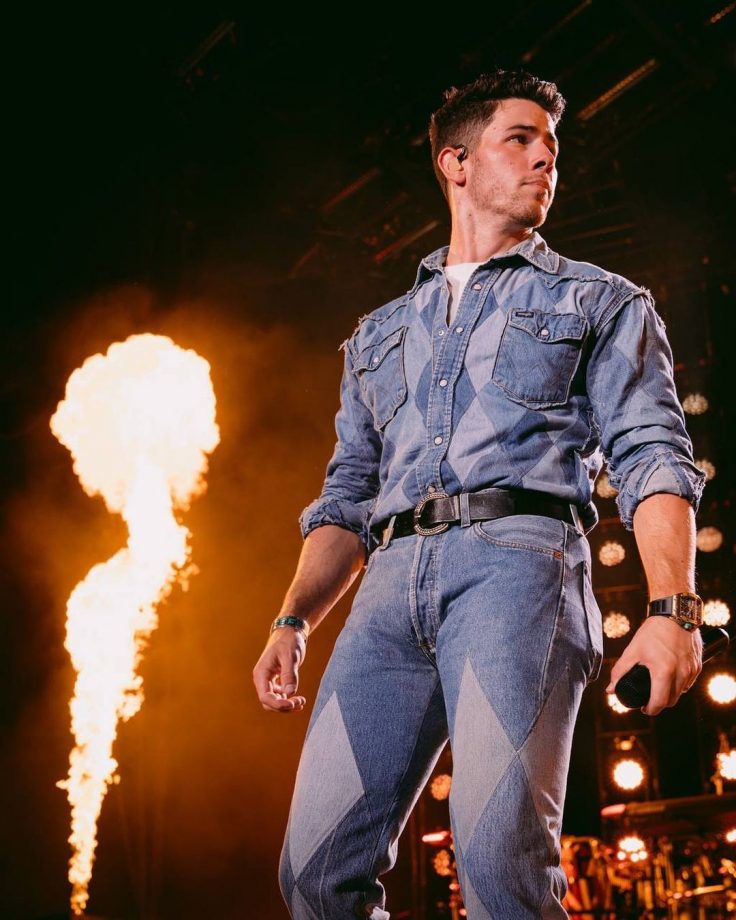 The Jonas Brothers are currently performing around the United States on their ‘Remember This’ tour, with their next show scheduled for later today in Nampa, Idaho. No doubt we’ll see a few more appearances of Nick’s RM – guess it’s his tour watch? Perhaps he’ll buy another watch with his cut of the ticket sales…

RELATED: Cody Simpson Shows Off His Tokyo 2020 OMEGA Silverware On The Gold Coast

Earlier this year, Nick also hosted the 2021 Billboard Music Awards, during which he also performed alongside his brothers as well as popular DJ Marshmello as the show’s closing act. Nick’s appearance at the awards show was not without controversy, however, as many fans claimed his sartorial stylings on the night were an attempt to copy Hary Styles. You can read all about that here.