A staple of classic British motorcycle subculture, the Café Racers were a breed of bikes that put all-out performance over everything else. Hopped up engines and stripped down chassis made them lean and mean, and they were often seen racing from one transport café to the next, trying to outrun the rockabilly song on the jukebox. While a lot of these bikes were custom built, many manufacturers caught on and released their own versions straight from the factory, which frequently became highly successful models. With loud exhaust notes, low sleek lines and heaps of attitude, these bikes were just as cool (or maybe cooler) than their leather jacketed and greased hair counterparts. 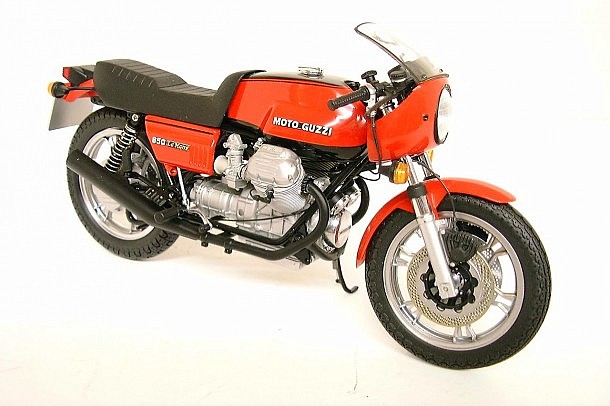 Born right in the middle of the Japanese motorbike invasion, the Moto Guzzi Le Mans set out to beat them at their own game. An 850cc engine producing 71bhp rocketed the Le Mans to something in the realm of 130mph. It did it so effectively that one 1976 journalist simply laughed the speedometer’s claims off, until he later calculated his speed using RPM and gear ratios and realized just how fast he was going. Matte black trim and a simple metal screen in place of a true air filter showed that this bike was all business, and no fluff. 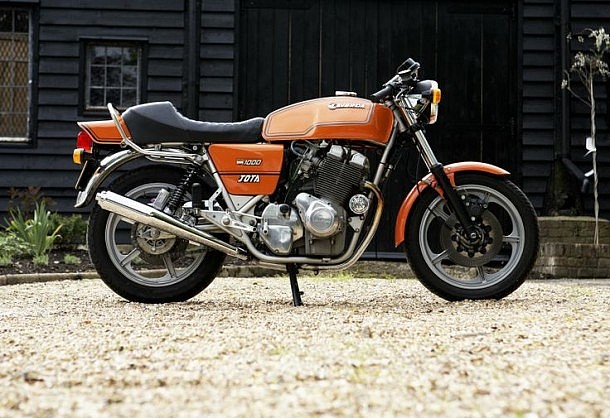 As if litre bikes weren’t powerful enough in standard road going trim, Italian manufacturer Laverda took their already-fast 3C model, and fitted what was basically a fully race-spec engine. Three Del’Orto carburettors fed three cylinders through big valves and a high lift twin-cam head, and out through very open and very loud exhaust pipes. With 90hp being put to the tarmac, the Jota could blast its way to 146mph, making it the world’s fastest production motorcycle in its day. While not as lightweight as some other bikes on this list, it held its weight nicely and was rock solid in the twisties. 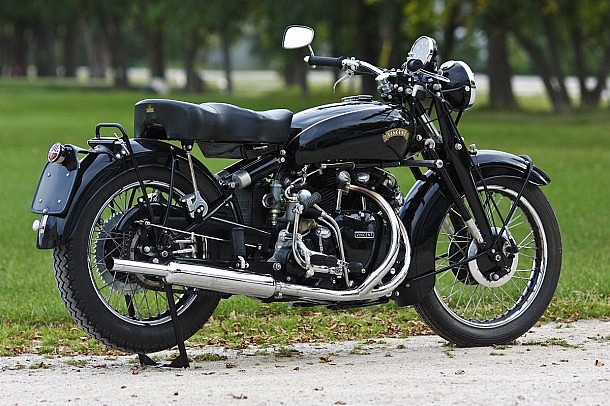 Imagine a time (let’s call it “1949”) when a fast motorcycle could do 100mph, and when motoring style consisted of bright chrome and rich leather. Enter the Vincent Black Shadow. The frame, the tank, the engine, the fork…all jet black. Surely this bike looked different, but the styling was only half of the story. With 55hp, the Black Shadow – strictly a road bike, mind you – could do 124mph. This is with post-war braking and suspension technology, making that the most harrowing 124mph you’re ever likely to experience. One journalist, who was a fan of the bike, commented “If you rode the Black Shadow at top speed for any length of time, you would almost certainly die.” 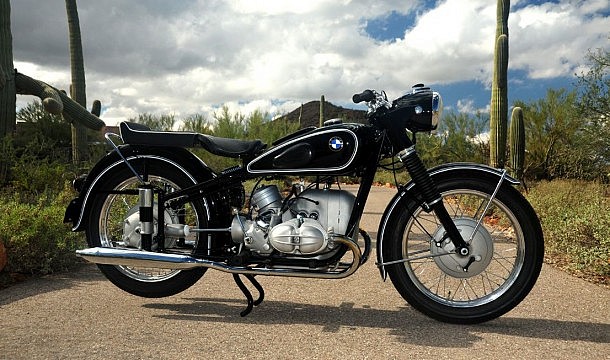 While not the “First 100mph Motorcyle” that BMW claimed it was at the time, perhaps the R68 was the first to break triple digits with only 594ccs. The 35hp plant took the bike to 105mph, and helped keep the weight down to 190kg. Notable features included a drive shaft design rather than a chain, and an on-board tire pump. An elongated single-seat, designed to allow the rider to slide back into a crouched position for high speed riding, shows what this bike was all about. Its fans claim that while it wasn’t the absolute fastest bike of the era, the way in which it achieved its speed made it a pleasure to ride, and it remains one of the most desirable BMW bikes to date. 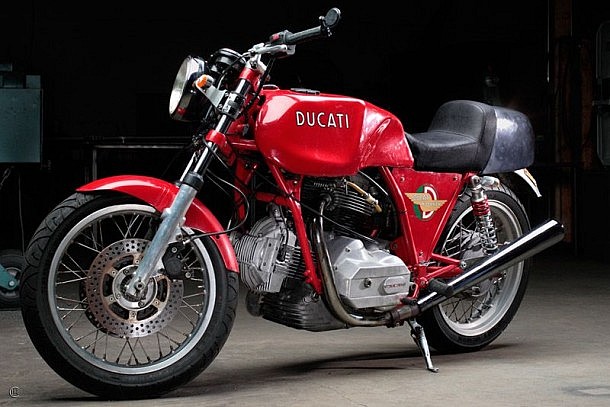 Ducati’s first big-bore bike, the 860 remains a “like it or hate it” sort of machine – which suits the Café Racer mentality just fine. Based off the widely acclaimed 750 GT, Ducati increased the displacement up to 864cc, and turned to stylist Giorgio Giugiaro of ItalDesign to shape the appearance. Giugiaro, famous for the original VW GTi, BMW M1, Aston Martin DB4 and many other influential designs, introduced to the 860 the highly angular design elements that defined the era of automobiles. Tall and wide handlebars and a large sideplate made this bike unique, and its engine architecture remained a Ducati staple for many years to come. 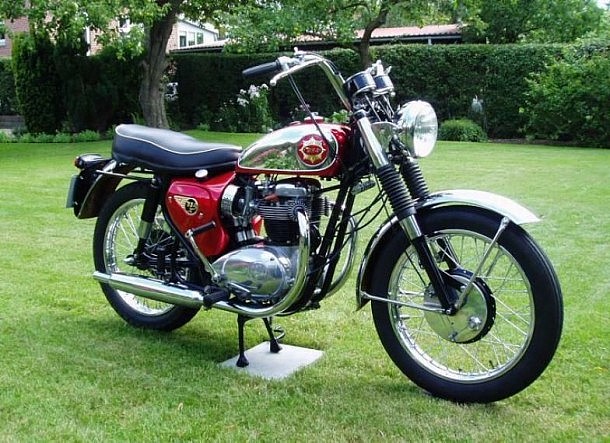 Designed to make the Café Racer a more useable style of motorbike, the Lightning sacrificed a bit of top speed for midrange torque, an adjustment that made the bike highly popular and widely loved. Don’t be fooled though, this bike is hardly tame. Weighing in at 179kg and with 52hp, it still had a lot of kick and could best 110mph. A pop culture regular, this bike has appeared in film and TV all over the world, most notably in the 1965 Bond film Thunderball, where it is seen being ridden by Italian actress Luciana Paluzzi (but is actually being ridden by British moto-racer Bill Ivy in a wig). 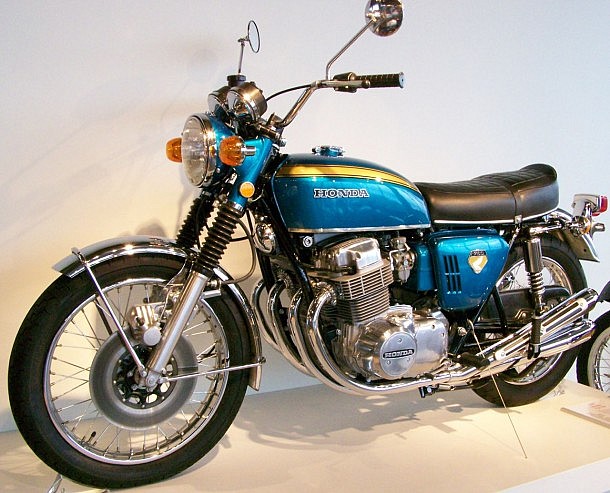 Before Honda released this motorcycle, the term “superbike” did not exist. It was not that it was the fastest bike…it wasn’t, at 120mph it was just shy of the Vincent from 1949. What made the CB750 so super was the combination of attributes it offered. The OHV inline 4 cylinder, with gorgeous polished headers wrapping under the frame, a front disk brake, electric starter, and a score of other features made this bike unlike anything on the market. It was a fantastic performer with looks to back it up, and it was even comfortable and reliable to boot. Ease of maintenance and an affordable price tag rounded out this bike, and to many it remains one of the greatest ever built. 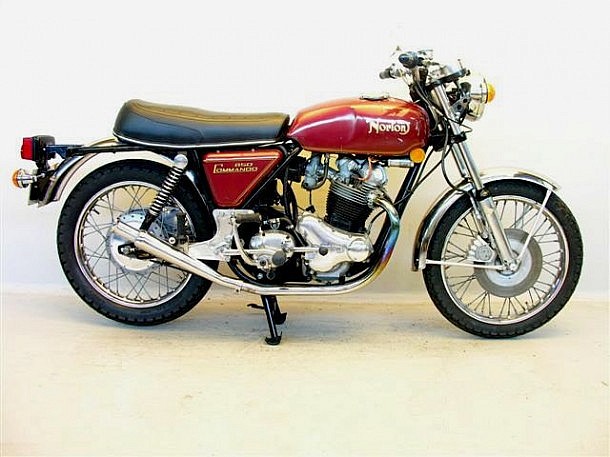 As the classic twin-cylinder motorcycle design grew up over the decades, its flaws became more apparent. Displacement was getting larger and didn’t seem to be stopping, and as a result engine vibrations were becoming more and more of a problem. To solve this, Norton hired Rolls-Royce engineer Dr. Stefan Bauer to design an all-new frame for the Commando. Utilizing rubber bushings and a subframe design, Bauer completely isolated the engine and transmission from the frame, allowing Norton to keep their classic engine design in what would turn out to be a wildly successful bike, winning Motor Cycle News’ “Machine of the Year” 5 times in a row. 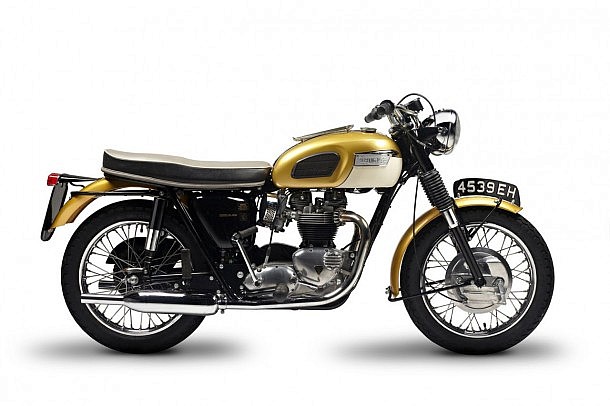 The original Triumph Bonneville was conceived and designed in such a short amount of time that it didn’t even make it into that year’s sales brochure, an ironic start to such a fantastic and popular bike. With a 649cc engine and 46hp, and named after the Utah Bonneville Salt Flats (famous for their land speed record competitions), “Bonnie” was created mostly for the American market, to give consumers the performance they had been asking for. Capable of 115mph straight from the factory, it frequently underwent modifications to be even quicker. The OHV twin engine was highly capable, and it was not uncommon to see it juiced up and swapped into other bike frames. 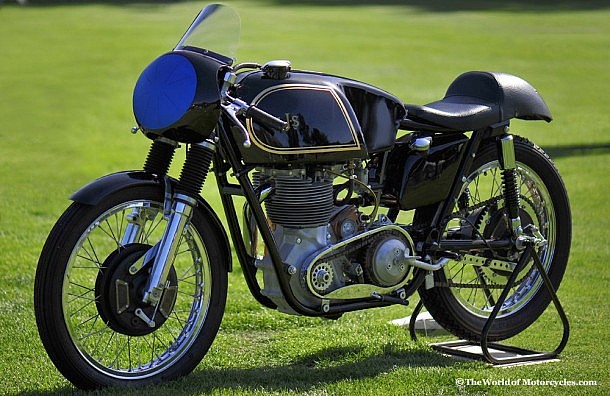 Perhaps less of a Café Racer and more of a track racer, the 7R was designed with competition in mind from day 1. First released in 1948, it immediately secured victories despite being slightly underpowered compared to its competition. By 1958, it had undergone many changes to the engine and a few to the chassis to keep it competitive with its multi-cylinder rivals, and it continued to win World Championships and the Isle of Man TT competition despite its aging design. By the end of its run, it made up to 40bhp and weighed a scant 129kg, no doubt a major key to its success.