Dunking on the haters.

Rubber lovers are a notoriously fickle bunch. Before you jump down our throats, we’re sneakerheads too: there’s nothing we like more than a crisp new release… And nothing gets our blood boiling more than someone disrespecting fine footwear, like Jake Paul did to his ‘Air Diors’.

But let’s be honest: sneakerheads can be pests online. Whether it’s ruthlessly critiquing someone’s crep choices or crashing websites trying to snap up new drops, modern-day foot fetishists are a bit of a scourge.

Commenters nitpicking celebrity sneaker choices has to be one of the most irritating trends on social media. Virtually any time someone famous steps out in something that isn’t a pair of ‘fresh’ Air Force 1’s (or doing something slightly unconventional with their kicks), sneakerheads are quick to give their opinion – often en masse.

Case in point: Mr Odell Cornelious Beckham Jr (or OBJ for the rest of us), wide receiver for the Cleveland Browns in the NFL, just shared a photo of his latest streetwear-inspired fit, complemented by his blinged-out Rolex GMT-Master II ‘Everose’ worth a tidy 140,000 USD.

Sneakerheads weren’t looking at the watch, however: they were complaining that him popping a squat resting on the balls of his feet was going to crease the toebox of his Nike Dunk Low ‘University Red’ sneakers.

“Nah the creasing gettin to me”, one commenter summed it up best. There’s a lot of love for the fit in the comments but just as many people salty about OBJ affecting the longevity of his sneakers by his choice of pose.

It wasn’t just random strangers angry about his posture.

“Boyyyyyyyyyy you creasing the fuck out them dunks 🥴🥴🥴,” Miami Dolphins running back Kalen Ballage also weighed in.

On the other side of the fence, some came to OBJ’s defence. “They’re just dunks lol,” various commenters pointed out.

The University Reds saw a limited release by Nike last month to celebrate the 35th anniversary of the Nike Dunk. One of Nike’s most enduringly popular sneakers, the Dunk originally debuted as part of the 1985 Nike College Colours Program that delivered footwear in the school colors of 12 popular basketball programs. In particular, this re-release references the Red Storm men’s basketball team of St. John’s University in Queens, New York – one of the first collegiate colorways Nike ever released.

Dunks have since been adopted by skaters, and were particularly popular in the early 00s – their desirability up there with other shoes like Jordan 1s and Bapestas. Dunks have seen somewhat of a renaissance in recent years, their collectibility skyrocketing after collaborations with Virgil Abloh and Travis Scott among others. These University Reds retailed originally for 100 USD but have since skyrocketed in value on the aftermarket, fetching prices sometimes four times as high. 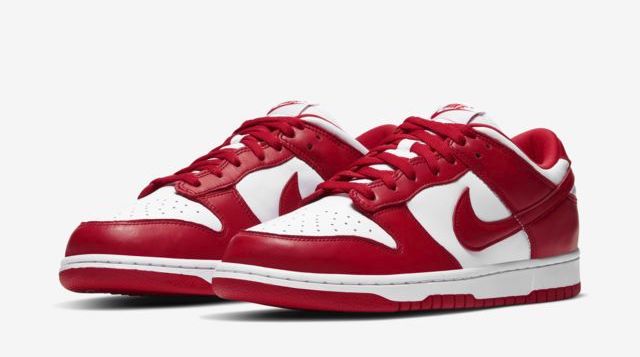 Sneakerheads go to great lengths to make sure their kicks look box fresh. Leather sneakers with flat toeboxes like Dunks crease easily, damaging their appearance and desirability in the eyes of Nike aficionados. OBJ squatting like this is a sure-fire way to crease his Dunks, which people are clearly unhappy about.

We reckon people should just stop being so salty that they didn’t get their hands on the University Reds and just let OBJ do his thing. Yes, it annoys us too when celebs are nonchalant about their rare sneakers, but shoes are meant to be worn. You have to accept that your sneakers will crease eventually.

Call us when he spills sauce on his shoes. Then we can talk.