The City of Angels has always been a destination for well-heeled expats from around the world: actors, artists, the rich and famous… One of its most famous transplants is the Canadian singer/songwriter Justin Bieber, who can regularly be spotted cruising the streets of Beverly Hills in his Lamborghini Urus, picking up coffee and wearing Crocs. You know, usual celebrity stuff.

It seems as if he’s really taken the Los Angeles lifestyle to heart – his fashion choices moving from ‘effortless’ to effortlessly cool. Outside an LA fire station, shooting clips for his latest album Changes, Bieber was spotted in a particularly crisp workwear-inspired outfit, consisting of a textured terry cotton shirt over the top of a cotton tank top, dark Carhartt WIP Master trousers, a cap from Perth-based skate brand Butter Goods, and Dior x Nike Air Jordan I sneakers.

We say ‘luxury’, because not only are those ‘Air Dior’ sneakers worth tens of thousands of dollars, but he was also wearing a $100,000 gold Audemars Piguet Royal Oak at the time – putting the Casios of most LA hipsters to shame. 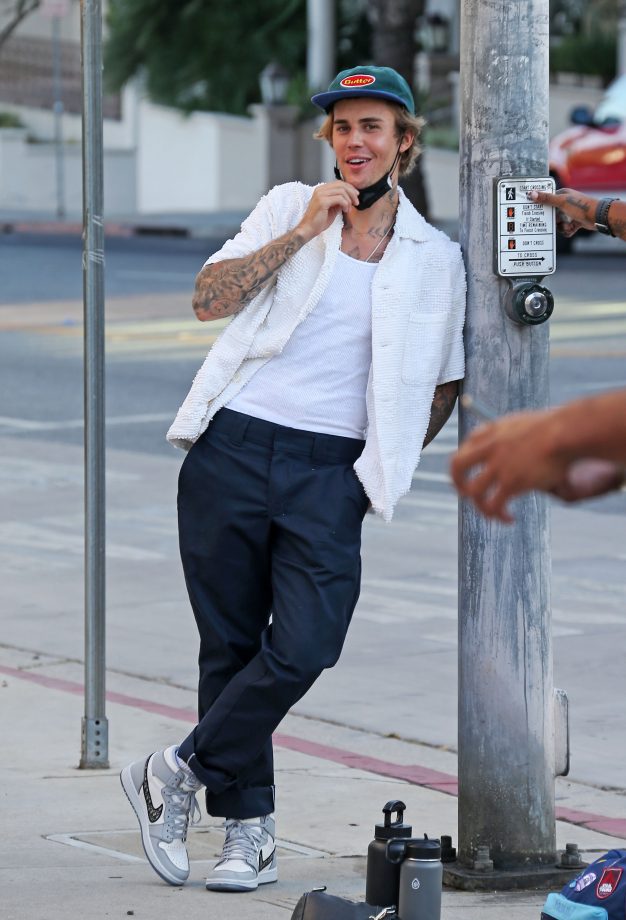 Without the conspicuously luxurious touches, you could easily mistake Bieber for a South Central skate rat – which is of huge credit to Bieber’s sartorial stylings.

Workwear and streetwear regularly overlap, and both fashion trends owe a lot to skateboarding culture. Indeed, skateboarding was invented in LA, and this whole ecosystem of fashion owes a lot to the city. Skaters originally adopted cotton drill work trousers from brands like Dickies or Carhartt as skating attire, and donned basketball sneakers like Converse Chuck Taylors well before skate brands like Vans were making shoes. The 1985 Air Jordan I also has a unique relationship with the subculture, regularly used by pro skaters contrary to its sporting origins.

Bieber’s latest single Holy, a pop/gospel track that features frequent collaborator Chance the Rapper, came out alongside a music video last week, which you can watch here.