One of the most imaginative big-name music videos to be released this year has been the short film for POPSTAR, the latest single from Miami mega-producer DJ Khaled featuring chart-topping Toronto rapper Drake.

The video, which sees fellow Canadian superstar Justin Bieber fill in for Drake in a debaucherous jaunt through a party-ravaged mansion, is sneakily hilarious and self-referential, Bieber lip-syncing Drake as he raps about his songs needing Bieber’s face for his songs to get big.

Bieber’s clearly enjoying stepping into Drake’s shoes in the video, playing as a playboy. It’s delightfully meta, especially when Drake, through Bieber, imparts some surprisingly sage advice about investing in watches, as Bieber flexes a completely iced-out Rolex Datejust (ref.116300). It’s a perfectly extravagant watch for an extravagant music video: another example of this ‘icy’ timepiece is currently selling for 28,000 AUD on Chrono24. 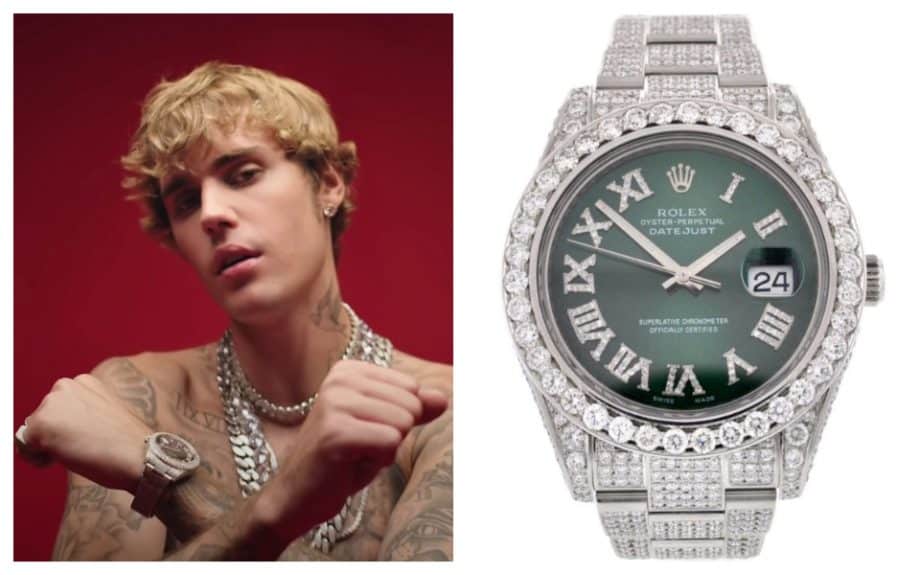 At first glance, the watch looks as if it’s just plain steel – an easy trap to fall into. Upon closer inspection, it’s clear that it’s no ordinary Datejust, but it’s a testament to the skill of Rolex’s jewellers that they can make the watch appear so subtly glamourous. That relates to the wisdom Drake shares about watch collecting in the song, actually:

The ‘crown’ line is a clear reference to the Rolex logo: a spiky coronet that’s known the world over. But the crucial part is the first line.

‘Icing out’ watches is a hugely extravagant move, and you’d be confident in assuming that adding diamonds to a watch is only going to increase a watch’s value. However, that’s not necessarily the case. In some cases, it can actually devalue your timepiece.

“Beyond the quality of the actual gemstones themselves, there is still the issue of originality and factory-intended condition that can affect the prices of diamond-set watches,” Rolex experts Bob’s Watches relate.

“In the same way that a serious collector would rather have an entirely original, completely unpolished vintage Rolex Submariner than one that had been fully restored, a diamond-set Rolex is only of additional value to the purist collector if it was Rolex who supplied and set the diamonds.”

“In some extreme cases, custom-set diamonds can actually detract from the overall value of a watch. If someone were to alter the original dial and bezel of a vintage Rolex Daytona by setting it with a slew of poor quality, low-carat diamonds, the end result would be a timepiece that was worth significantly less than what it was before the modifications had ever taken place.”

“Additionally, customizing or modifying a new Rolex watch will void its factory warranty, and in certain cases, make it ineligible for future factory services to be performed… While this is completely irrelevant to some Rolex owners, it can be of significant importance to others, especially if their watch was recently purchased and still has multiple years left on its warranty period.”

That’s why Drake’s line about only buying factory watches is so significant. It reveals a truth about investing in watches: if you want your timepieces to stand a chance at appreciating in value, steer clear of customising them.

Drake doesn’t always follow his own advice, however – he’s also a fan of customised watches, such as this 289,000 AUD Chrome Hearts x Rolex Day-Date he showed off in July. He’s also known to be in possession of a Virgil Abloh-designed, emerald-encrusted Patek Philippe Nautilus and a minimalist 1017 ALYX 9SM x Audemars Piguet Royal Oak.

Bieber’s quite the fan of expensive watches too, recently posting a photo of him leaning against his Lamborghini Urus flexing a yellow-gold Rolex Daytona.

Bieber released his fifth studio album Changes in February this year, which has already become Bieber’s seventh US number-one album. Bieber became the youngest solo artist to have seven US number-one albums by the age of 25, breaking the record being previously held by Elvis Presley.