Cristiano Ronaldo is arguably the world’s best footballer, and the first footballer ever to become a billionaire. As of 2020, his pay comes in at a cool 105 million USD a year – to put that in perspective, that’s enough to buy 35 Bugatti Chirons (or 7% of the world’s entire supply), or over 1,642 times the average Australian yearly salary.

Needless to say, he’s a wealthy man. And when you’re that wealthy, you can enjoy the finer things in life: fancy cars, luxurious holidays, and of course, scores of expensive watches.

Ronaldo’s watch collection is already eye-watering, not only due to its size but also its exorbitance. Not only does CR7’s stable include pieces from the likes of Rolex, Jacob & Co., Richard Mille, Hublot, Bulgari and Breguet (a virtual who’s who of the luxury watch industry) but many of them are diamond-encrusted, like his 1 of 1 Franck Muller Cintree Tourbillon worth $1.5 million that he’s shown off yet again in a romantic photo he shared to Instagram over the weekend. 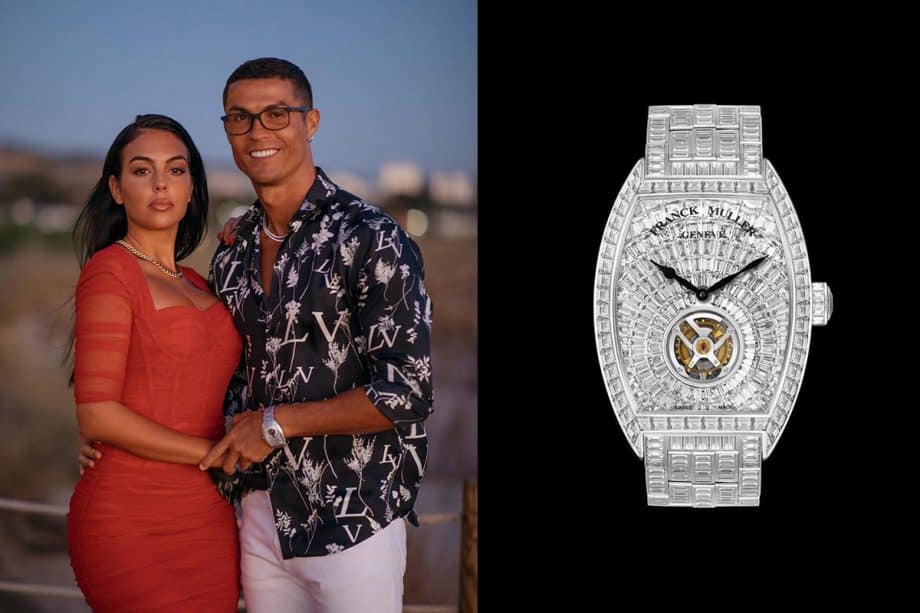 He’s not quite in the style realm of ‘nerd who’s just come into a lot of cash’ but he’s not that far off, either. This sparks the question: is there an inflection point where your taste stops improving in line with your wealth, and starts heading in the other direction?

The photo also reveals an awkward truth about the super-wealthy: for the very, very rich, conspicuous consumption is virtually an expectation. You’re expected to wear luxury brands, and your taste changes almost by necessity. For the 0.01%, a Rolex just doesn’t cut it any more; a Maserati is humdrum; wearing Brooks Brothers would be considered slumming it. In order to ‘keep up’, you make insane purchases like Franck Muller watches. You’re expected to up the ante: when you can eat nothing but wagyu sirloin, why would you go back to eating cheeseburgers?

Indeed, it’s the ‘subtle flex’ that we find much more impressive, such as Conan O’Brien’s Panerai or Dolph Lundgren’s Ferrari. Like Ronaldo, O’Brien and Lundgren are exceptionally successful and can afford just about any watch or car they like. But their more considered approach to luxury goods ownership is emblematic of a much more refined personality. Hell, take Warren Buffet (worth 79 billion) or Mark Zuckerberg (worth 96 billion) – astronomically wealthy, but misers in comparison: Buffet wears the same Rolex Day-Date he’s had for years, and Zuck doesn’t even wear a watch.

Of course, it’s Ronaldo’s money and he’s entitled to spend it however he wants. Maybe he truly admires the artistry and beauty of Franck Muller’s scintillating horological creations. But we can’t help but think the only reason you’d get something so ostentatious would be to show off your net worth, not because you think it looks particularly cool. We’d much rather wear something more subtle; more practical – like a Grand Seiko or NOMOS Glashütte – that’s just as admirable from a technical or aesthetic standpoint, but nowhere near as flashy.