Whether you’re hoping to make the Olympics for the 100m or just enjoy a ‘run’ on the world-famous Bondi to Bronte track, you’ll likely need some running gear. In the words of Nike, “If you have a body, you are an athlete”; this has never been truer.

Every man and his selfie-stick are picking up a sport of some description and looking good is now a key aspect of this fitness revolution. Even if you aren’t going to be sprinting one of the most intense running trails in the world, activewear can be great to wear around the house or out to a slightly hungover Sunday brunch. There is a reason why everyone is on the activewear train at the moment; it’s about time you step onboard.

First and foremost, activewear needs to be functional, but in this day and age, it needs to look as good as it performs. No matter how you like your exercise, it’s best to stand out for the right reasons so it’s time to throw out that ‘stringer’ singlet and invest in some proper running shorts, running tops and even running jackets… maybe even some killer running shoes.

It is easy to get confused, lost and even intimidated by the plethora of running brands that exist today, especially when they’re all pushing some sort of extra-special sweat-wicking, fast-drying, organic, knitted technology in their kit. If you’re looking for something to keep you looking cool and allowing you to move in whatever way you see fit, here is our selection of the coolest running clothing and footwear brands for men.

What clothes do I need for running?

If you're going to get seriously into running, you'll need to invest in clothing that is lightweight, comfortable and loose-fitting so allow for freer movement. You should look out for running gear that wicks sweat and moisture away from your body, and items such as compression shorts can help aid with blood flow.

What should I wear when running in winter?

You don't want to wear heavy sweatshirts when running in winter. Instead, you should look into running jackets to provide a breathable, waterproof outer shell, as well as long compression tights and long sleeve compression tops. 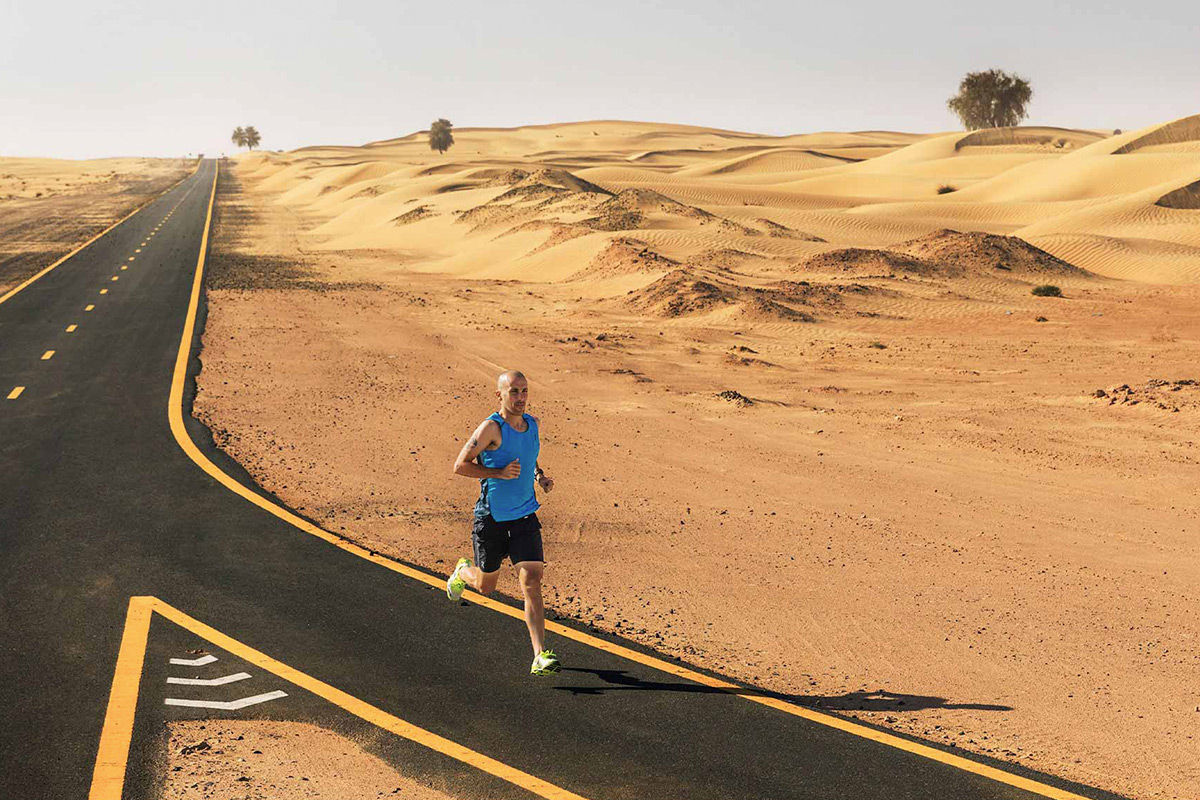 Born in the Swiss Alps in 2010, On Running is a relatively new kid on the sportswear block. But don't let that youthful nature fool you, this sportswear company is focused on producing some of the very best gear around, with a heavy focus on footwear.

On's footwear philosophy is to provide its customers with shoes that provide soft, cushioned and cloud-like landings, but with enough spring in them to propel you forward and ahead of the competition. It clearly works, as On Running is now a globally-recognised brand and one that is more than capable of having the traditional 'big-name' brands quaking in their non-cloud-like boots.
Shop Now 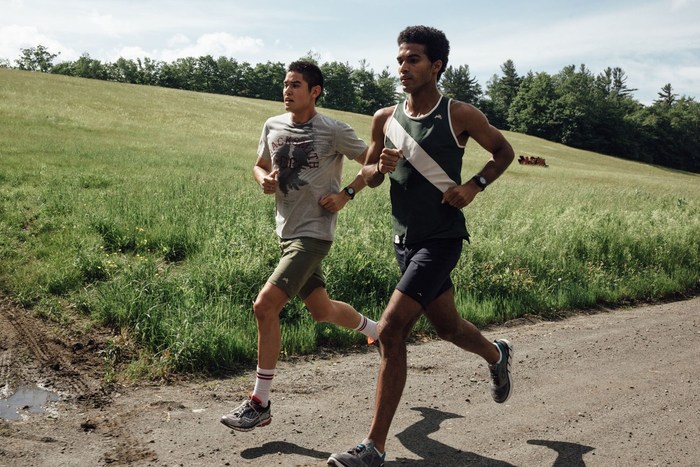 Founded in the region of New England, USA, Tracksmith is dedicated to all things running. Its apparel takes a particularly old-school approach to design (take one look and you'll immediately see what we mean) and is designed not just for the professional athlete who wants to compete at the highest level, but the amateur enthusiast who is all about 'giving it a go'.

With an extensive range of clothing encompassing t-shirts, shorts and jackets, Tracksmith's preppy college-inspired designs are sure to make you stand out.
Shop Now 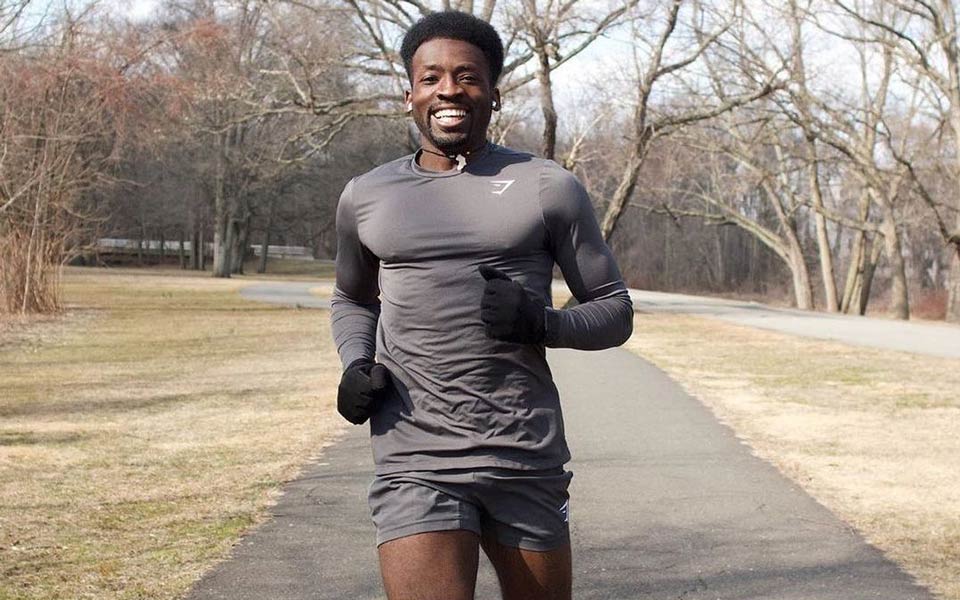 Instagram favourite Gymshark isn't just a brand for wearing to the gym to lift weights. The British brand, an undeniable success for its teenager founder, also has a dedicated collection of running clothing. Pieces are designed to allow for full range of movement, to effectively take moisture away from your body and to be lightweight to help you smash your PB times.
Shop Now 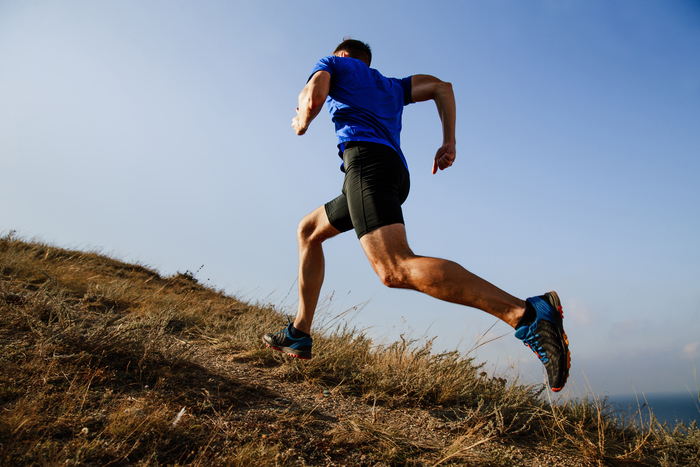 Lululemon started life in Canada, making clothing especially for yoga. They have now evolved into a brand that is at the forefront of activewear style, making high quality garments that reflect the needs of their wearers. You might be forgiven for thinking that Lululemon is a 'chicks' brand as it seems every paddington mum is wear their stuff, but, they make some seriously cool mens wear as well. Safe to say the ladies will love you in it.
Shop Now

Castore is a British brand founded by two brothers with the sole aim of creating the lightest, most durable and highest performing sportswear on the market. The brothers behind Castore are both athletes and sportswear consumers, so they knew exactly the sort of apparel to create in order to penetrate the market. There's no question that t's a premium brand, but in return you receive high-quality clothes that look as good as they perform.
Shop Now 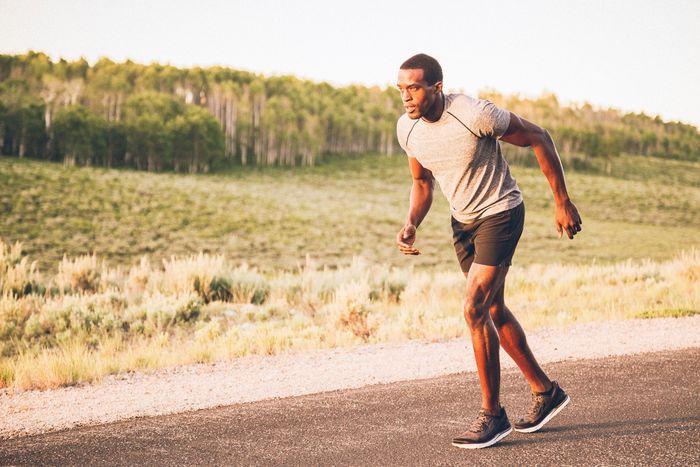 Rhone is a startup activewear company that caters specifically for men. Not one to do things by halves, Rhone uses some of the finest materials in the production of its clothing, including silverthread to help combat the effects of body odour thanks to its anti-bacterial properties. Rhone's use of silver is called SilverTech. The company's ethos is to seamlessly integrate 'fit, form and function' for those – particularly affluent men – who are committed to an active lifestyle.
Shop Now 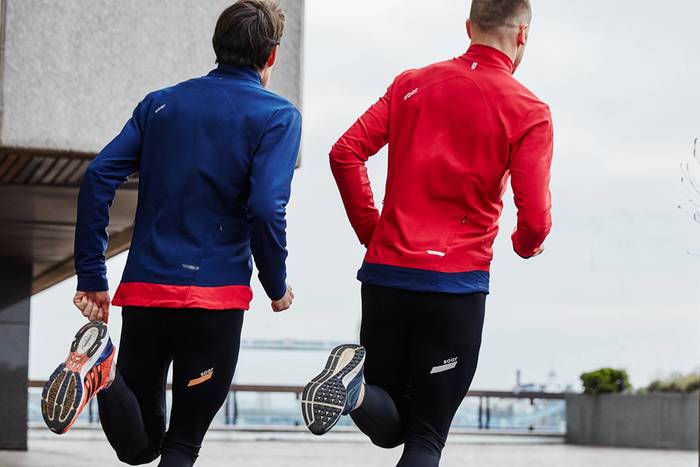 Named after its founder Tim Soar, SOAR Running was born with a mission to create genuinely useful clothing that "outperformed everything on the market." SOAR utilises some of the most advanced fabrics to make up its clothing, which is then styled into pieces you'd actually want to be seen wearing. It's a running brand first and foremost, and even claims on its website that it doesn't have time for the likes of yoga or CrossFit, so if its performance running you want and only want, it's a brand you need to check out.
Shop Now 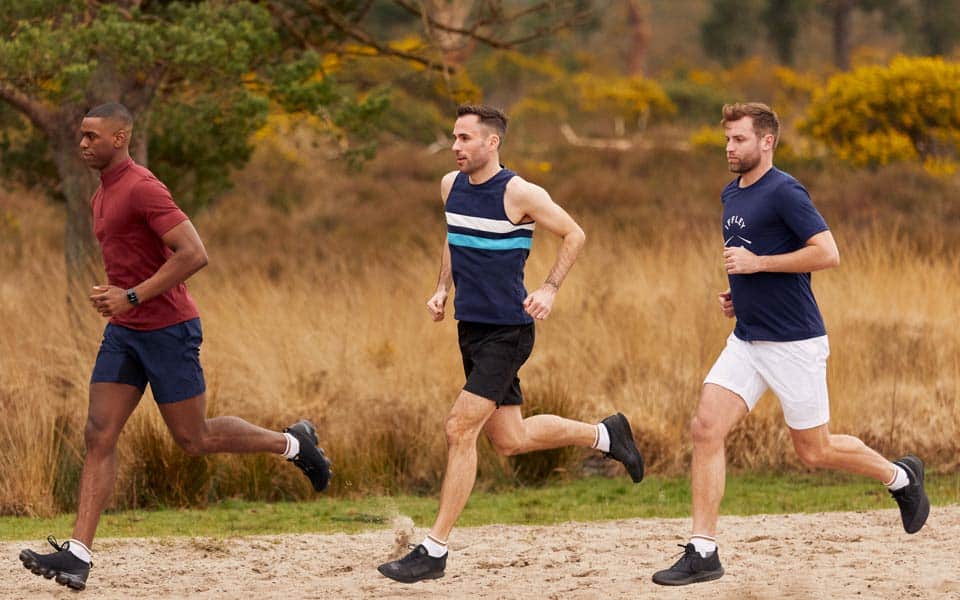 Iffley Road is the brainchild of a husband and wife team who both have a strong affiliation with running. Noticing a gap in the market for high-performance, stylish clothing that is also sustainably made, Iffley Road was born. Initially catering for men and women, the brand is now solely a supplier for running-mad men, although its apparel is more than capable of being used for other sporting disciplines.
Shop Now 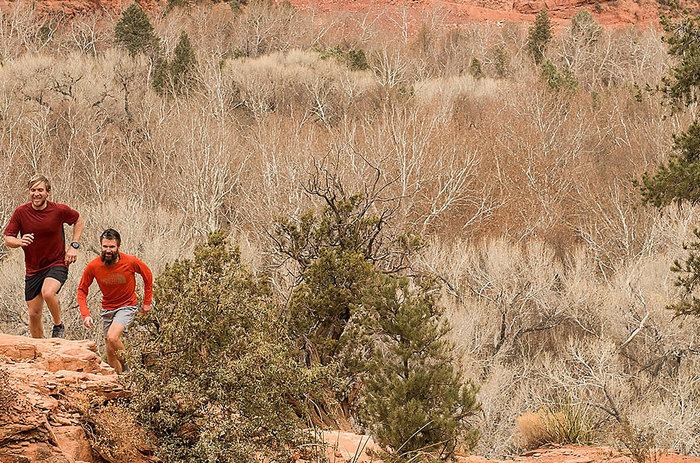 Merino wool is softer than any other wool, moisture wicking, thermoregulating, sustainable and odour-neutralising. Smartwool founders couldn't figure out why other brands weren't using it as a performance fabric and decided to start using it themselves. Ever since, they've been creating super comfortable running gear that performs in all conditions that also is good for the planet.
Shop Now 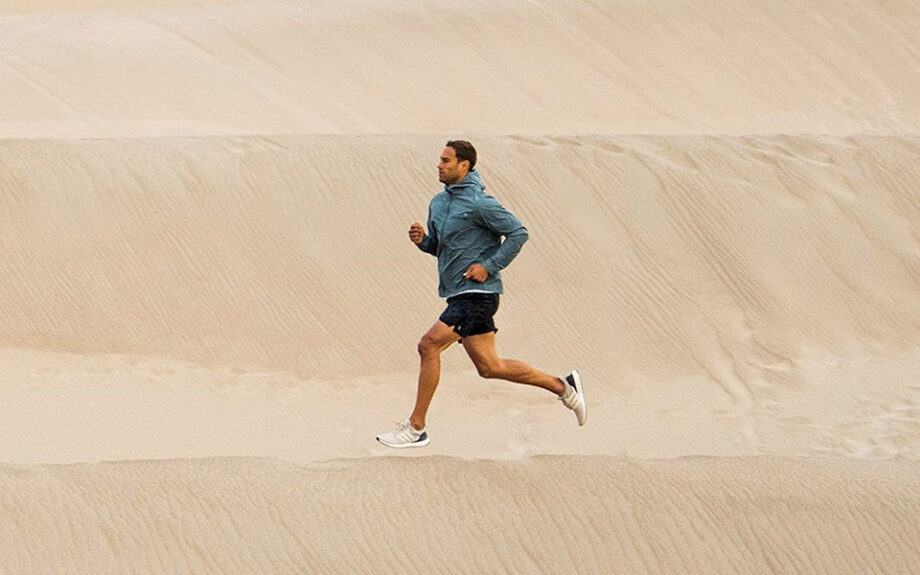 Vuori has a huge range of activewear that’s been specifically designed for running. Whether you run on the road or a trail, Vuori’s running clothes are breathable, moisture wicking, and will keep you comfortable while you run.
Shop Now 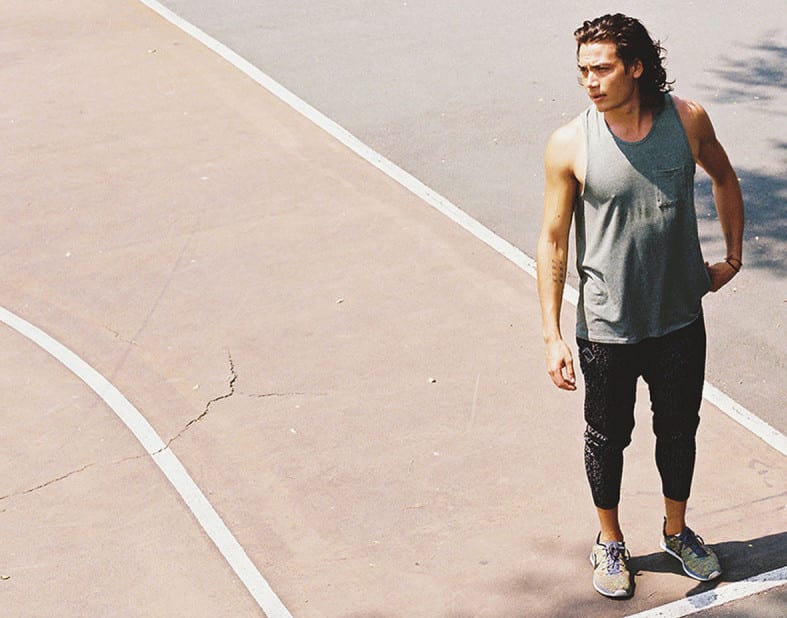 American activewear brand Outdoor Voices makes incredibly simple-looking, affordable clothing for use in the gym or out running on the streets. Clothing is made from its own proprietary fabrics that effectively move moisture from your body to the fabric's surface, which helps to add to their versatility. OV clothing can easily be worn when you're taking a rest from racking up the km's, being easily paired with jeans, chinos or shorts.
Shop Now 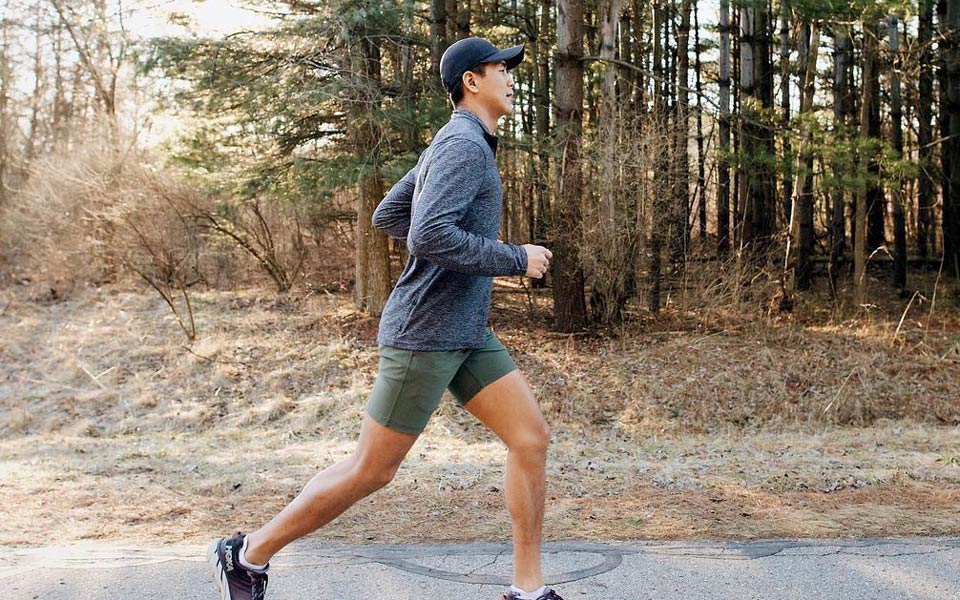 American clothing brand Olivers Apparel was founded on the premise of wanting to make all the capsule wardrobe pieces a man could ever need, well. Believing that guys should drape themselves in high-quality materials but to not pay over the odds for them, Olivers are pieced together a complete collection of everyday wear clothing that performs to a high level. Suitable for everyday wear or, indeed running, thanks to moisture-wicking and anti-odour fabrics, Olivers Apparel is a good-looking running brand you can rely upon.
Shop Now 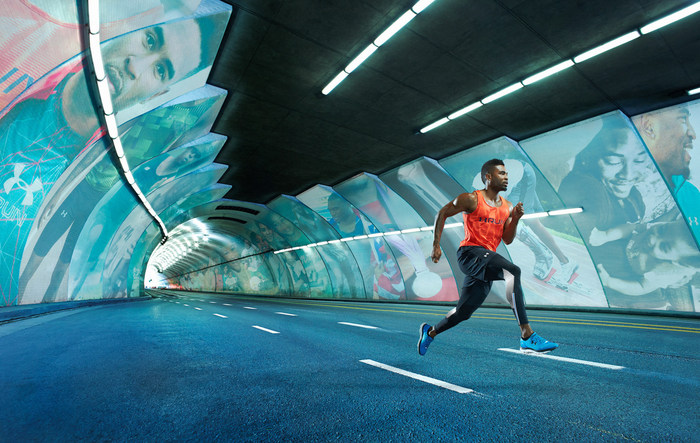 Founded by Kevin Plank in 1996, Under Armour was the first company to offer moisture wicking shirts for athletes. This innovation came as a result of Kevin, becoming soaking wet with sweat when training, to offset the issue he made a moisture wicking shirt which he gave to his teammates who made it to the NFL. One thing led to another and now they're one of the biggest players in the activewear game.
Shop Now 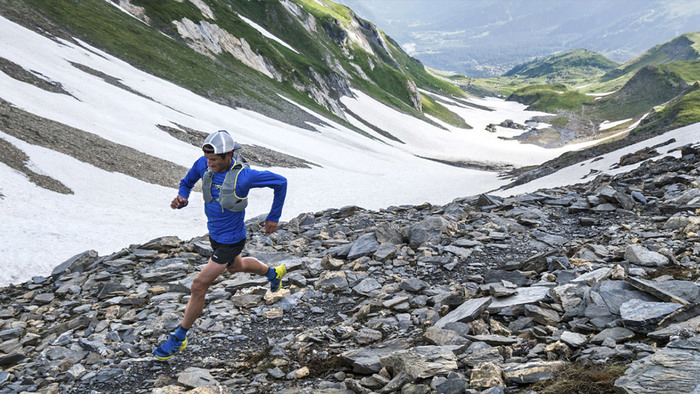 Patagonia may be a name synonymous with outdoor expeditions, but the American clothing company also caters for the runners out there. But is Patagonia after all, and so its running range – which includes tops, hats, shorts and jackets – is aimed more towards trail runners, and with its ethos of using predominantly recycled materials carrying over, you'll not only be able to perform to the best of your ability, but you can do so with a smile on your face knowing that you're helping the planet.
Shop Now 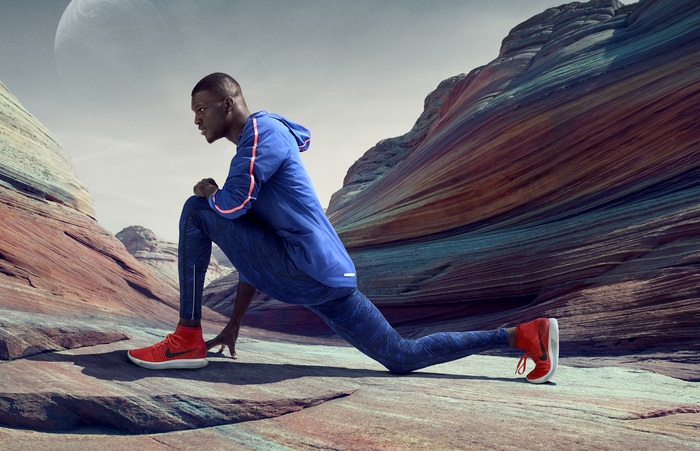 Nike. Do they even need an introduction? Started in Oregon in 1964, Nike has become world famous for activewear and running shoes. One might even suggest that were the fuel behind running as a social movement. Their kit can be seen on some of the worlds best athletes and they are constantly innovating to elevate human potential. Nike is a safe bet for any kind of active wear, you can rest assured that you are getting a high quality, innovative product that will help you perform to the best of your abilities.
Shop Now 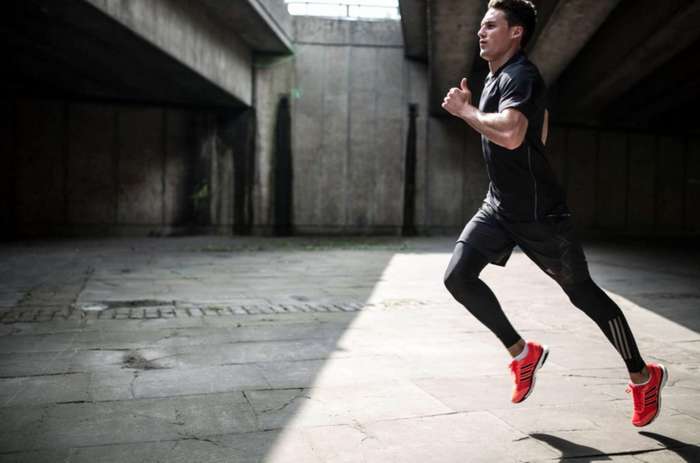 Adidas is the second largest sportswear manufacturer in the world, only behind Nike. Much the same as Nike, their kit has donned the backs of many of the worlds greatest athletes. Their clinical German styling and cutting edge technology is bound to help to stay at the front of the pack.
Shop Now 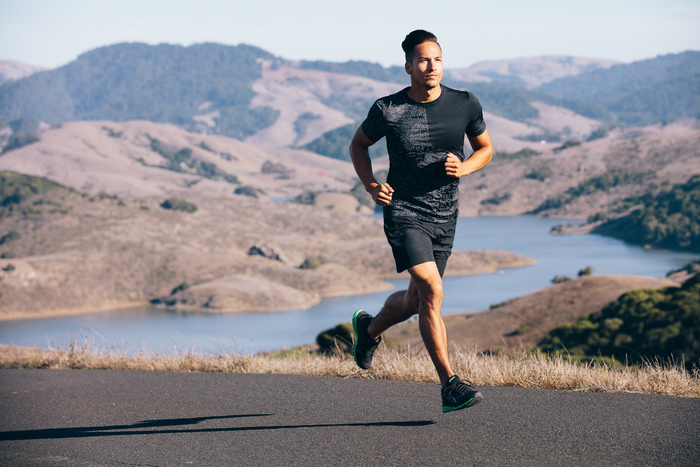 Originally founded as 'Onitsuka', Asics' shoes are often rated as some of the finest in the world. Favoured by many athletes looking for comfort as well as performance, Asics creates gear that performs at an exceptionally high level whilst keeping an athletes body in check.
Shop Now 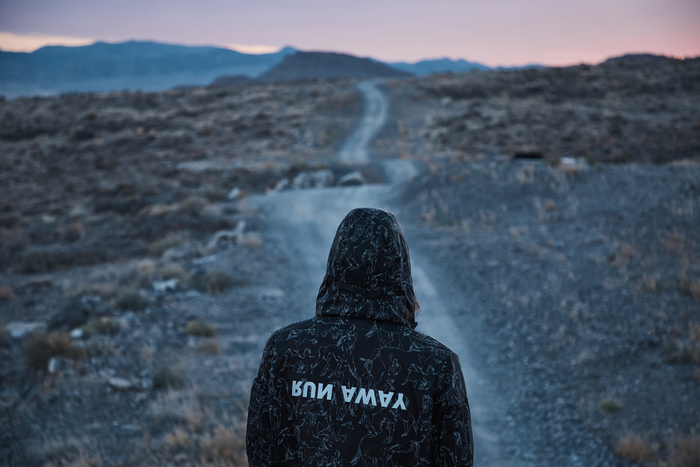 Satisfy isn't your run-of-the-mill running brand. Unlike most other companies that employ the use of compression-style clothing, or space-age technologies, all in the name of performance, Satisfy flips the bird to all that.

A quick look at its website and it could be any other 'cool' clothing brand with a rebellious attitude, such is the use of graphic prints and colours. But the anti-running ethos is counteracted by technical ingenuity – take moth eaten holes in place of a traditional ventilation system, for example. It's an incredibly unique brand and one that you should place on your radar.
Shop Now 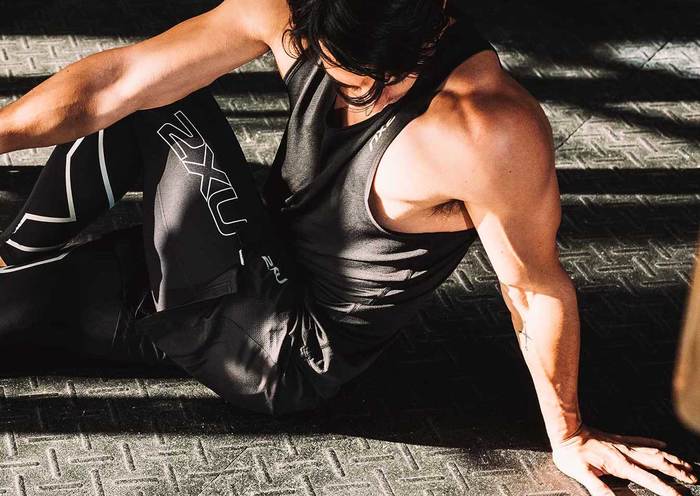 2XU or 'Two Times You' is an Australian sportswear company, based in Melbourne, that offers some of the most advanced performance apparel known to man. That's primarily because it was founded as a company targeted at professional athletes, before expanding into the public domain.

It's not just any old marketing jargon used to sell its clothing either, as genuine research goes into everything it produces, so it can determine the real-world benefits that can be passed on to you, the wearer. 2XU is best known for its range of compression wear, which is designed to help increase blood flow and to keep you moving.
Shop Now 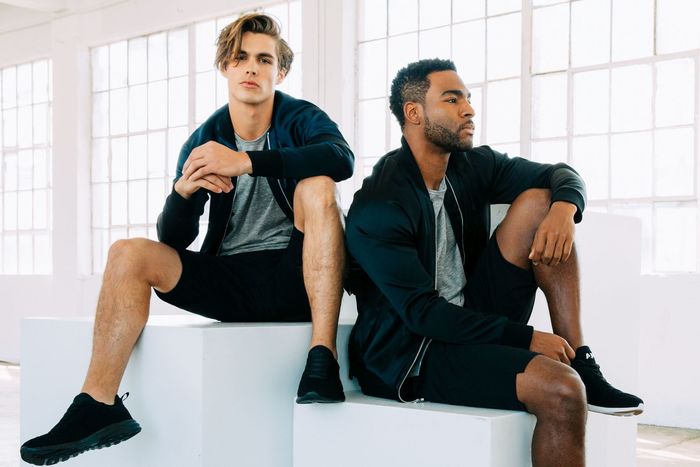 At the intersection between performance and luxury, APL is a newcomer to the performance clothing game. Their basketball shoes have actually been banned in the NBA due to their 'performance enhancing benefits'. If you're looking to take your game to the next level, APL is worth a look.
Shop Now

Stylish Yoga Clothing For Men Who Think They're Cooler Than Gandhi