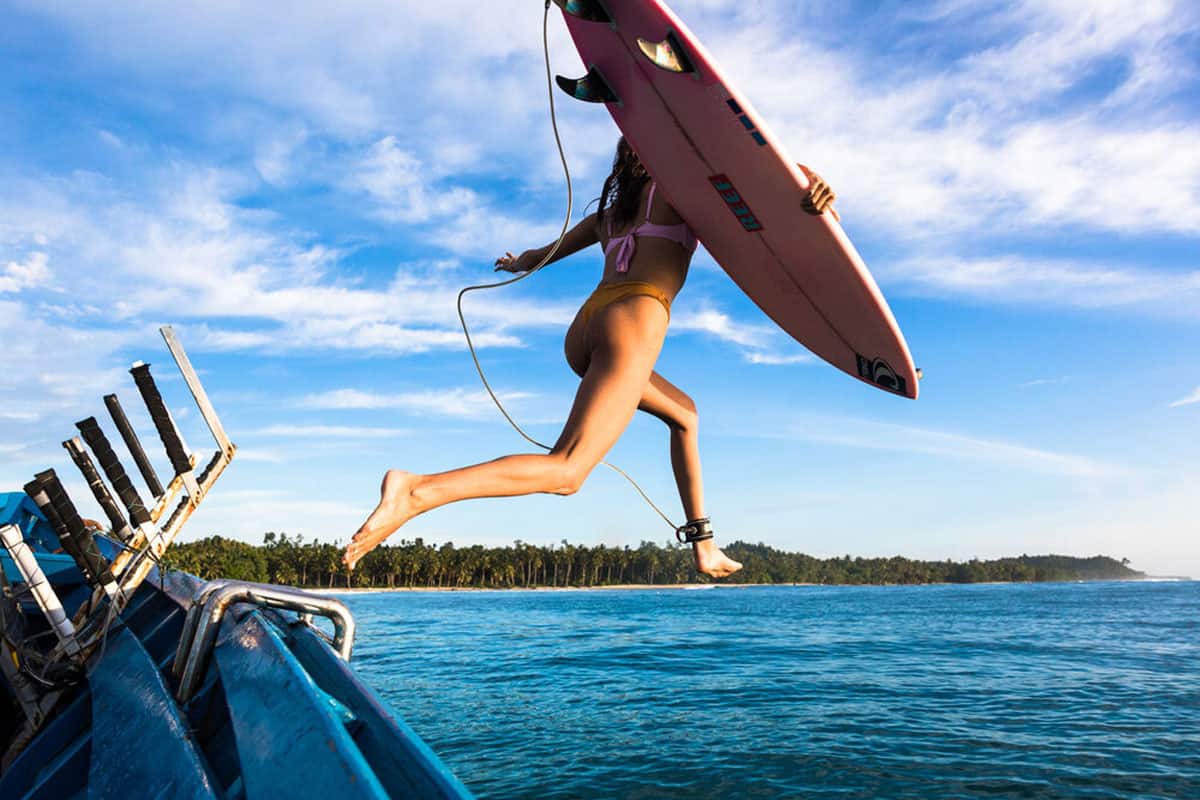 The Mentawai Islands are a mecca for surfers all around the globe. None more so than Australians – one million Aussies visit Indonesia every year, and though there are more idyllic islands available to a traveller flying into Padang, Jakarta or Denpasar than you can throw a villa full of surfboards at, the Mentawais is one of the most popular destinations for the purist surfer.

As The Journal of Tourism and Cultural stated in 2018, “The Mentawai Islands are home to some of the finest waves for surfing in the world, created by a blend of long-range swell, light offshore winds and coral reefs.”

That said, this aquatic playground is becoming more crowded every year – and with a different kind of demographic too.

Enter: the following photo, posted by photographer Javi Gago. Gago, who usually splits his time between the Canary Islands and Bali, last week took the chance – while most of us are unable to fly internationally – to post a cheeky throwback image.

Mentawais: that place full of mid-age fat rich guys and…awesome waves, missing my fatties so much! 😂

“Mentawais: that place full of mid-age fat rich guys and…awesome waves, missing my fatties so much!”, the photographer wrote.

Though this is a little tongue in cheek, the point remains. Head to the Mentawais today (or, next year, when tourism hopefully starts again in earnest) and you’re less likely to see Tom Carroll and Ross Clarke Jones than you are a group of middle aged American kooks, overly enthusiastic Israelis enjoying their time off military service and French Canadian girls “wielding harsh accents and peachy buttocks like weapons of war tak[ing] over the line-up, paddling straight to the inside wave after wave,” (BeachGrit).

It’s not just your wave count at risk either: the surf resorts are located in areas vulnerable to socio-cultural and environmental impacts.

Despite the luxury and world class waves everyone talk on their holidays at the Mentawais there is also a different reality that has to be shown.⁣⁣⁣⁣ ⁣⁣⁣⁣ Local communities are still struggling to earn a decent salary and the contrasts are more than evident.⁣⁣⁣⁣ ⁣⁣⁣⁣ Within a few meters there are luxury surfing yachts anchoring next to a beach where some locals pick up dead corals to sell it to construction companies.⁣⁣⁣⁣ ⁣⁣⁣⁣ Always wonder if your impact of your actions are making the world a better place, stay conscious. JG ⁣⁣ ⁣⁣ #mentawaiislands #mentawai #localcommunity #beconscious #indonesiapeople

The Journal of Tourism and Cultural says “these are vulnerable areas because of their highly sensitive ecosystems and because indigenous local communities lack economic and political power.”

“Many other places in Mentawai are vulnerable to erosion, global warming and sea rise changes, but it is the areas that attract tourists and tourist resorts that are most vulnerable socio-culturally and environmentally because of the impact of higher numbers of people.”

“Nevertheless, surf resorts are located in such areas because the quality of surf waves means people will travel great distances.”

In any case, until travel restrictions ease it’s all a bit academic anyway (unless you’re this guy, who just spent 6 months surfing perfect waves on his own in paradise).