Don’t want to miss travelling? Don’t look at this photo… 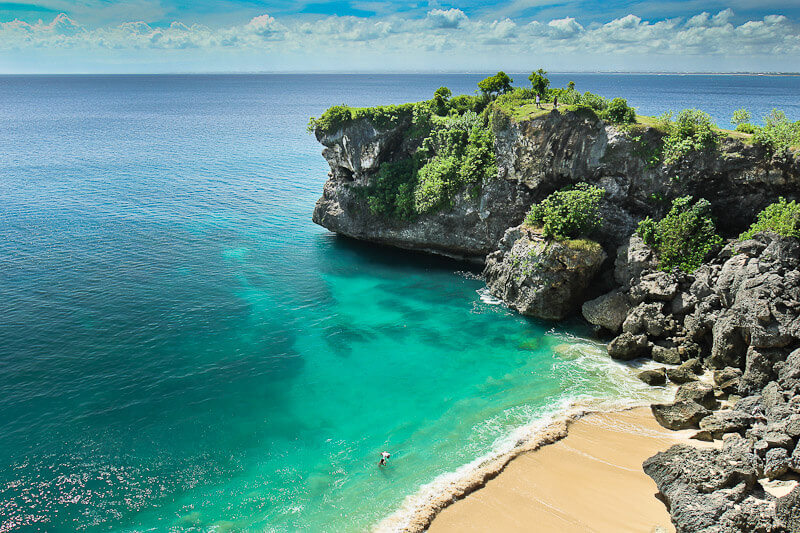 Sorry to break it to you but Maslow forgot one crucial thing: self-actualisation is impossible without starting a lemongrass candle and organic yoga matt boutique in Seminyak.

If there’s anything we’ve learned over the last twelve months – as any hint of a Bali travel bubble sends Australians frothing – it’s that the Island of the Gods has a special place in Australians’ hearts.

On that note: Bali held an intoxicating allure long before it was snatched from our reach by The Spicy Cough.

Now its call has increased double, with the age-old seduction tactic of unavailability.

Australians, in case you have been living under a stone for the last year, are forbidden from travelling internationally right now.

Though some have gained exemptions to fly off abroad, the vast majority have stayed at home. This has led to a domestic travel boom – as well as a whole lot of FOMO.

Speaking of FOMO, one photo which was recently posted to Instagram by account @whitepalm_hotel_bali depicts a Bali scene which, we’d bet, practically every Australian wishes they could magically transport themselves too.

Taken at Balangan Beach, the surfer’s playground north of Bingin and Dreamland, the image shows off the beach in all its glory.

Heading over to Twitter, recent Tweets show we’re not alone in missing Bali.

Wish I was in Bali sippin on a piña colada, watching the sunset right now!

I wish I was in Bali right now cleansing my soul

While you might argue there is more to Bali than sunbaking and surfing (and there definitely is), search deep in your suitcase and your priorities will probably betray you (something DMARGE discovered on a journey to the archipelago in 2019).

RELATED: I Tried Bali’s Instagram-Famous ‘Floating Breakfast’ & It Was A Total Disaster

As we reported earlier this year, “There is one slightly sordid reason we have developed an even greater love for Bali in recent years – the opportunity to provoke FOMO in family and friends.”

Social media has gone off like popcorn kernels in boiling butter in recent years, with Instagram and Youtube – for many – replacing Tripadvisor, The Lonely Planet and Google for travellers looking for guides, inspiration and visualisation for their upcoming trips.

The truth is living in Bali right now as an expat, for the small number of Australians who have managed it via travel exemptions (or already being over there when the borders came down) is not entirely the career of cupcakes Instagram makes it out to be.

An anonymous source told DMARGE his plans were wrung out by The Bat Kiss: “My partner and I came here for a job in the tourism industry, which was great timing (not). We arrived in late January 2020 to start work and by the middle of March Bali’s tourism began to suffer due to COVID. This meant that we stopped work because of the rapid decline in tourism.”

“It has been very challenging. But the most difficult thing has been to witness the devastation this pandemic has caused Bali and its local people. Very minimal tourism has meant that local businesses have been un-able to support themselves during these very tough times resulting in people being forced to travel back to their villages and/or islands to find work again.”

“We have been here just over 1 year and are planning to come back to Aus next month,” he told DMARGE in February 2021.

“Regarding the job luckily we had savings. But me and my girlfriend were unable to find another job as working here requires a KITAS visa, which requires the company you work for to sign you on and do all the logistics with Indonesian Immigration.”

“There are definitely a lot of expats who have experienced the same, whether they be holidaymakers who got stuck or business owners that have also suffered from the lack of tourism. Everybody has definitely been affected here one way or another.”

That said, there is another side to the coin. Peter Hibberd, Executive Creative Director at Ogilvy who has become quite the WFH (work from hotel) connoisseur in Bali, told DMARGE in February, “the surreal reality is… dead silence. The streets of Seminyak are like a ghost town still to this day most nights. There’s maybe 10% of places actually open. A usual trip from Canggu to Seminyak (6.5km) is usually an hour or more, now, 15 mins.”

“There are still some wonderfully surreal things happening even though the island is under the influence of Covid. For example, I sat and watched an international concert pianist on a white grand piano on the edge of the cliffs at Uluwatu as the sun set.”

RELATED: The Embarrassing Mistake Most Tourists Make In Bali

“So forget booking three months in advance to eat fine dining at Locavore, a call that day and you’ll generally get you a seat.”

“Even if I ran out of things to do on the main island of Bali, (which I haven’t), I’ve jumped on a boat to Gili to finally take my deep diving license to chill out with turtles, manta and sharks at the bottom of the ocean floor then skip over to Nusa Penida and Lembongan for some of the quintessential IG location shots.”

“All three of the smaller islands are empty of tourists so wherever we went, we had the place to ourselves. I think a long ship diving tour of Komodo is on the cards next.”