But one tech revolution we’re sadly a bit behind the times on is electric vehicles. While some countries like Norway and China have embraced the so-called ‘EV revolution’, Australia remains somewhat behind the ball. Aussies just aren’t as interested in EVs yet – with recent data from the country’s leading online car classifieds reaffirming the motoring public’s priorities.

Carsales recently shared their top 10 keyword searches on their platform for March 2021, and unsurprisingly, EVs don’t make the cut. Australians are looking in quite the opposite direction, actually: the top two search terms were ‘4×4’ and ‘SUV’, with almost 800,000 unique searches for those kinds of typically fossil fuel-thirsty cars.

‘Hybrid’ does come in at #6, which is a good sign, but the absence of searches for purely electric cars on the platform suggests that EVs still have a long way to go with the motoring public Down Under. 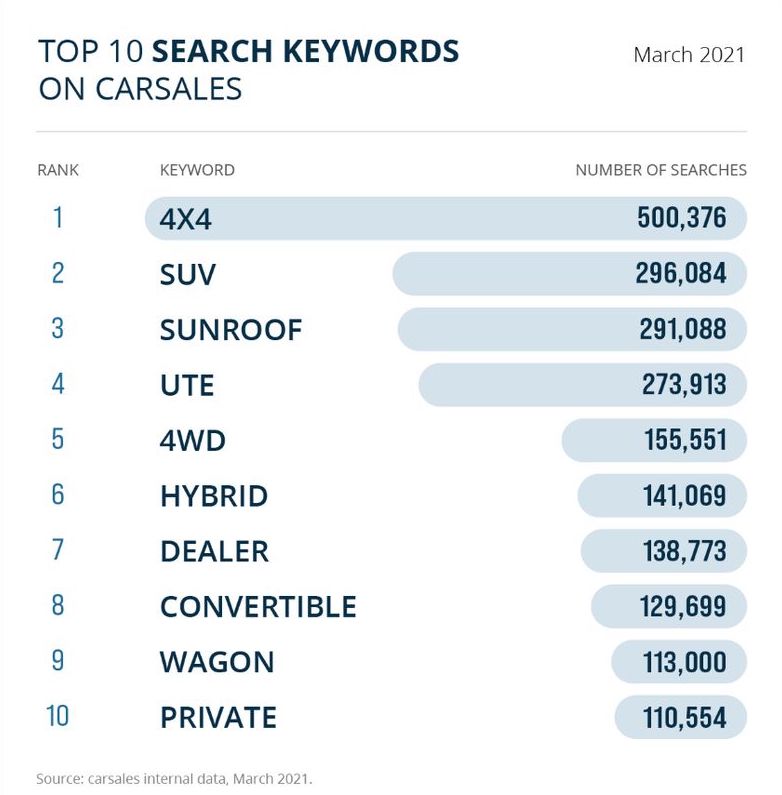 It’s also interesting that ‘wagon‘ cracks the top 10, too – maybe Australians are rediscovering an appetite for the currently neglected body type?

RELATED: Coolest Station Wagons For Australians To Buy In 2021

Perhaps it’s not surprising that there’s not much search volume for EVs on Carsales. Only a handful of electric car models have even made their way to Australian shores as of 2021, and most remain rather unaffordable for the average Aussie.

Let’s break it down: the cheapest new electric car in the country is the Chinese-built MG ZS EV crossover, priced at $40,990 before on-road costs. The cheapest used EV on Carsales right now, for comparison, is a 2013 Nissan Leaf with an asking price of $15,777.

Ironically, where many countries offer substantial incentives for consumers to purchase EVs, the federal government actually imposes a substantial financial disincentive, as most EVs on sale in Australia are affected by the much-reviled Luxury Car Tax. Some Australian states, such as Queensland, Victoria and the ACT offer some incentives to purchase EVs, but they pale in comparison to what other countries offer. No wonder EVs aren’t as popular here.

It’s also not a big surprise that Aussies are looking for SUVs and 4x4s right now: we’ve always had an appetite for rough-and-ready cars, and the SUV has long been the most popular body type in the country (RIP the humble sedan).

Additionally, with international travel still off the cards thanks to The Spicy Cough, road trips have become the holiday du jour over the last twelve months – and getting a big, capable off-roader that can tow a caravan and conquer terrain is a no-brainer. Indeed, the demand for 4x4s has seen prices for vehicles like Land Rover Defenders, Suzuki Jimnys and Toyota Land Cruisers absolutely skyrocket.

What we really need Down Under is some electric 4x4s, like the new GMC Hummer EV basketball star LeBron James has been tooling around in, or the much-hyped Tesla Cybertruck. Electric off-roading is a frontier that hasn’t really been explored yet, but momentum’s building: Jeep in the US has even set up solar charging stations at a number of trails (coinciding with the launch of a hybrid Wrangler).

We reckon that’ll be the tipping point that will finally get all the electric skeptics over the line. Any car brand that can them an EV that’s as reliable and capable as a Land Cruiser – with a charging network to boot – will have a license to print money.

Where To Stream James Bond ‘No Time To Die’ In Australia