The Gyllenhaals are a Swedish noble family that have certainly left their mark on history. They count among their ranks military generals, influential politicians, journalists and scientists – and more recently, film directors, producers and actors.

Indeed, one can only describe Jake Gyllenhaal as ‘noble’ – especially if you take a look at his latest outfit. The 40-year-old Hollywood heartthrob is one of the best-looking and best-dressed men in show business, both on and off the red carpet, but he really pulled out all the stops last Friday at the Venice International Film Festival for the world premiere of his sister Maggie’s film, The Lost Daughter.

Gyllenhaal hit the red carpet in an all-white ensemble, pairing a bone blazer and trousers with an unbuttoned, slightly lighter shirt, plus some rich brown oxfords and a gold Cartier Santos watch (a timepiece he seems to be a really big fan of, having rocked a stainless steel example on a number of occasions). 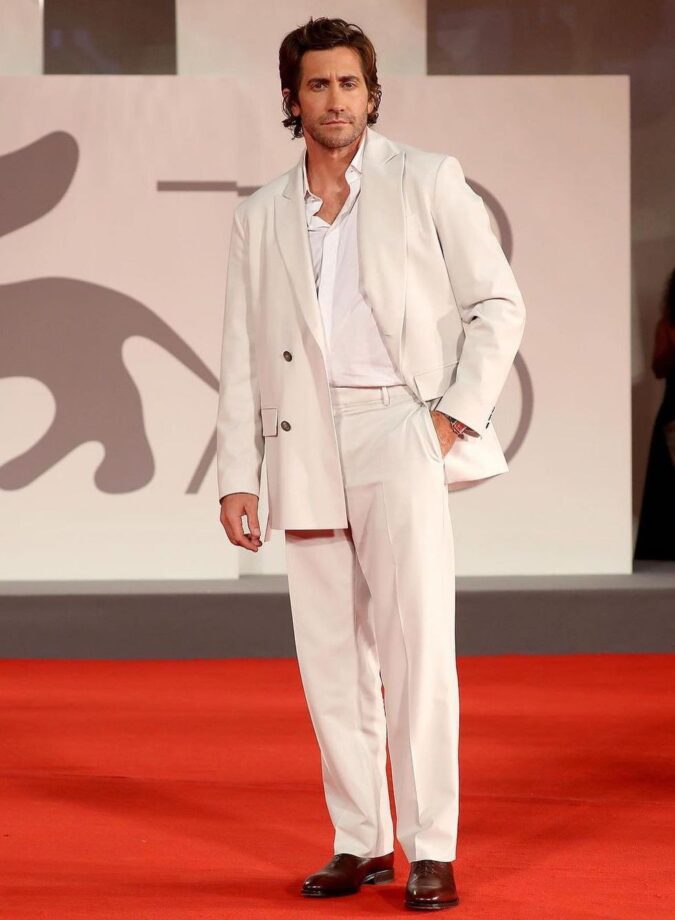 It’s a somewhat unconventional outfit to wear at such an event, but it’s brilliant. It straddles the line between formal and casual perfectly; it’s eye-catching, but not so ostentatious that it would steal the limelight away from his sister Maggie, who he was there to support and was the real star of the night. In short: classy as hell. Good work, Jake.

RELATED: A White Suit Is The Sharpest Style Statement A Man Can Make; Here’s The Right Way To Wear It

As for his own filmic exploits, there’s been a flurry of conjecture over whether Gyllenhaal will reprise his role as the Marvel Cinematic Universe villain Mysterio in the upcoming blockbuster Spider-Man: No Way Home.

Gyllenhaal has yet to be officially confirmed to appear in the film, which is set to feature characters from all the modern Spider-Man films since 2002 – such as Alfred Molina’s Doctor Octopus, Jamie Foxx’s Electro and J.K. Simmons’ J. Jonah Jameson – but fans are fairly confident that Gyllenhaal will also be making an appearance. Watch this space.