A charcoal BBQ – or barbecue, to give it its proper spelling – is a method of cooking unlike any other. Not only does barbecuing provide a whole new flavour profile to the likes of meats and fish, but, because they’re usually only used during clement outdoor conditions, they become the literal life of summer parties.

Barbecue hails from the Spanish word barbacoa, which was once used to describe the physical wooden structure the Arawak people of South American would use to grill their food. The word was eventually applied to refer to the actual act of grilling food (although of course, BBQs are still very unique in their look). Today, there are many variations of the BBQ: gas, infrared, electric and charcoal, which itself can be broken down into various sub-categories.

Charcoal-based grills were the first to come about, although their invention has a relative of Henry Ford’s to thank. It was Edward G. Kingsford (whose wife was Ford’s cousin), who took wood scraps discarded during the production of the Model T and turned them into charcoal, creating the very first charcoal briquette.

It was George Stephen, a welder at Weber Brothers Metal Works who came up with the hemispherical grill design we now see as the iconic design for charcoal BBQs. Following some success in selling his designs to customers, teamed up with Weber to create the Weber-Stephens Products Company, the very same that’s responsible for some of the finest charcoal BBQ grills on the market today.

There is much debate surrounding which method is best for cooking on a barbecue, but it’s because of the history of charcoal and the more ‘authentic’ flavour using it a fuel source provides, that we thought it best to provide a round-up of the very best charcoal barbecue grills available today.

They may all differ in price and looks, as well as the amount of cooking space you’re afforded, but all have been produced with the sole intention of giving you the classic American-style charcoal taste. 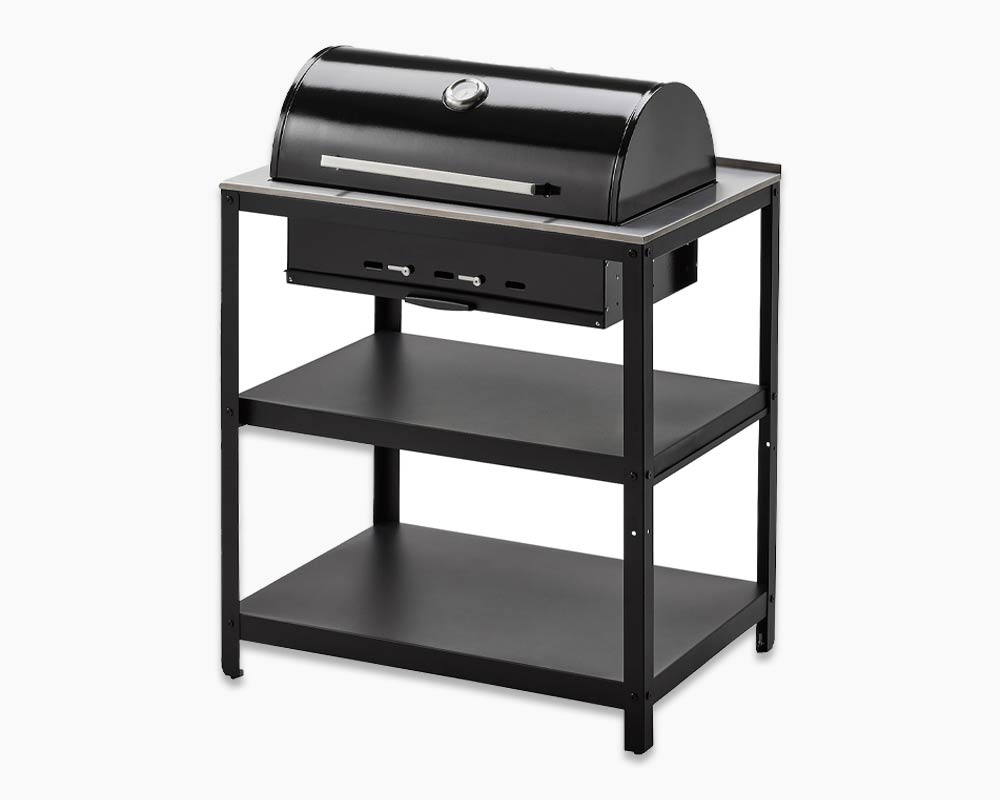 Yep, the iconic Swedish furniture manufacturer is also in the charcoal BBQ game. This Grillskär charcoal bbq comes with a couple of shelves for storing plates and food waiting to be grilled, has air vent openings to adjust the intensity of the flames and, in true IKEA fashion, has extra pieces that can be bolted on to it to provide extra storage and preparation space.

There's plenty of space on the grill itself for searing some steaks and sausages, and you even get extra touches such as hooks to hang utensils. We also think it's a bit of a looker, too.
Shop Now 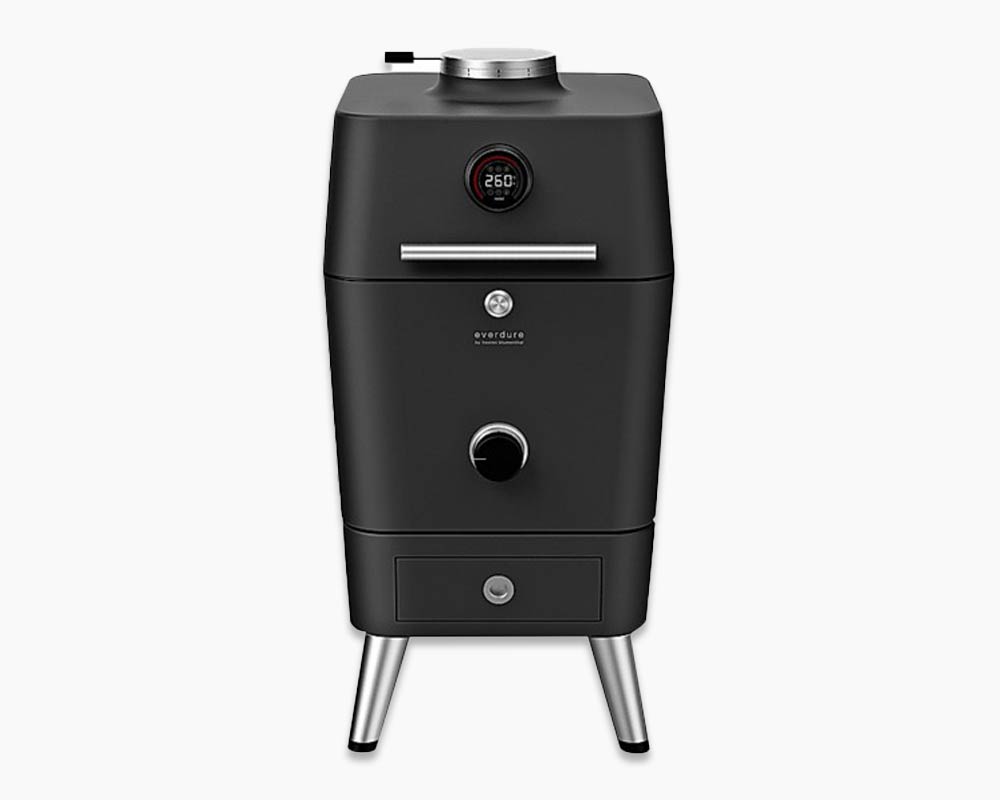 If there's one man who was going to shake up the charcoal BBQ game it had to be Heston Blumenthal. The Michelin starred British chef is always are the forefront of innovation in the culinary world and this charcoal BBQ, created in collaboration with Everdure is one of the most outlandish we've ever seen.

Not only does it look like some sort of futuristic space pod, but it employs a suite of futuristic tech to ensure you end up with only the finest quality grilled food. Airflow can be finely controlled, meaning you can set a precise temperature, which you can read on the touch glass display. You also get internal probes (not that kind) that constantly monitor the temperature of the food you're cooking, so you know exactly when it's done.
Shop Now 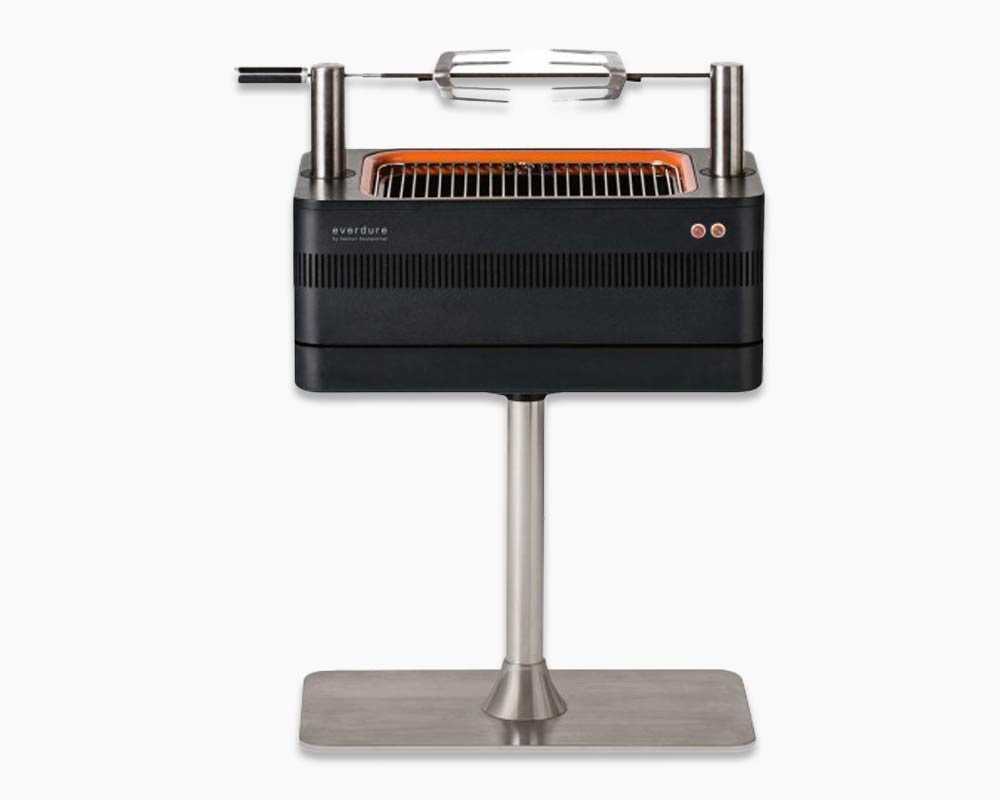 If a space-age charcoal BBQ isn't quite your bag but you're still after a celebrity-endorsed charcoal grilling machine, then perhaps this other model from Heston may be more to your liking.

This Fusion model may resemble a Kraftwek podium, but it's a charcoal BBQ that will appeal to those who love to spit roast their pork or chicken to the point where the meat falls off the bone. The charcoals are good to go in just 10 minutes, Cliplock Forks make sure your food is held securely and the porcelain enamel firebox makes clean up a breeze.
Shop Now 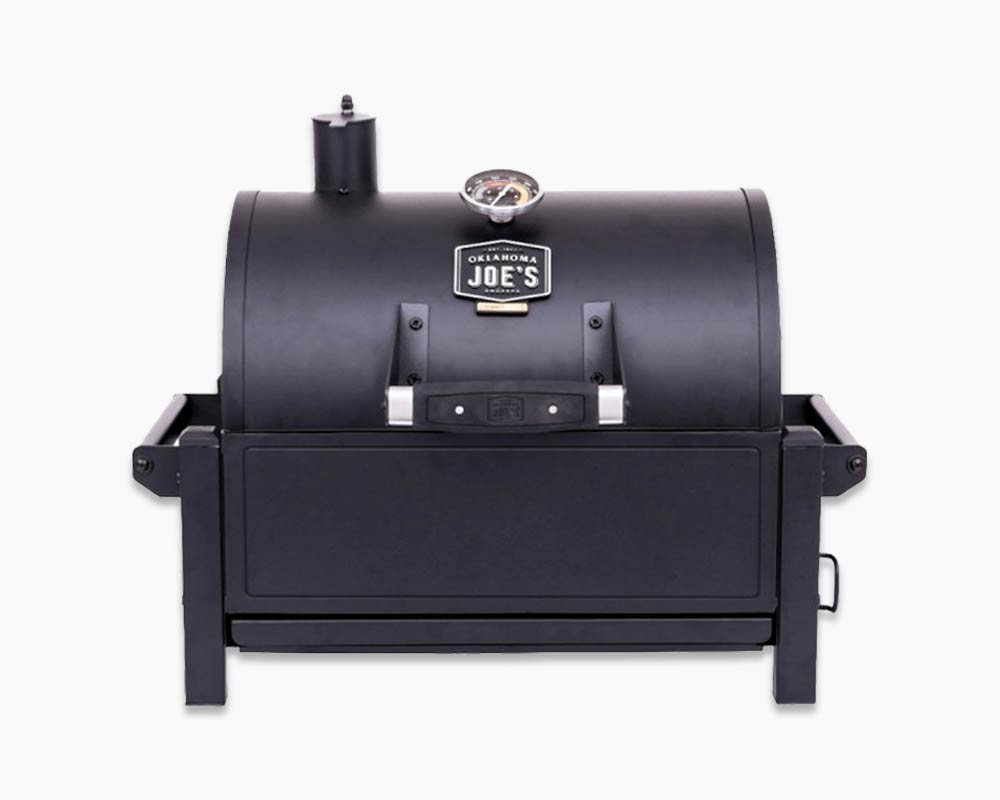 We often associate charcoal BBQs with the garden and outdoor space, but what if space is a premium and you live in an apartment, for example? It's unlikely you're going to fit a fully-fledged BBQ on a balcony, which is where this tabletop grill from Oklahoma Joe's comes in handy (of course, you can still use it in your backyard if you have one, we're not discriminating here).

The Rambler is made from heavy-duty steel so you know it will last, while the cast-iron grate is large enough to accept approximately 6 burgers, or 6 steaks or 12 sausages (or a combination of all, naturally). The height of the charcoal tray can be adjusted to bring the heat closer to, or further away from, your food to influence cooking speed. Its portable nature also means you can put it in the car and take it to the park for larger social gatherings.
Shop Now 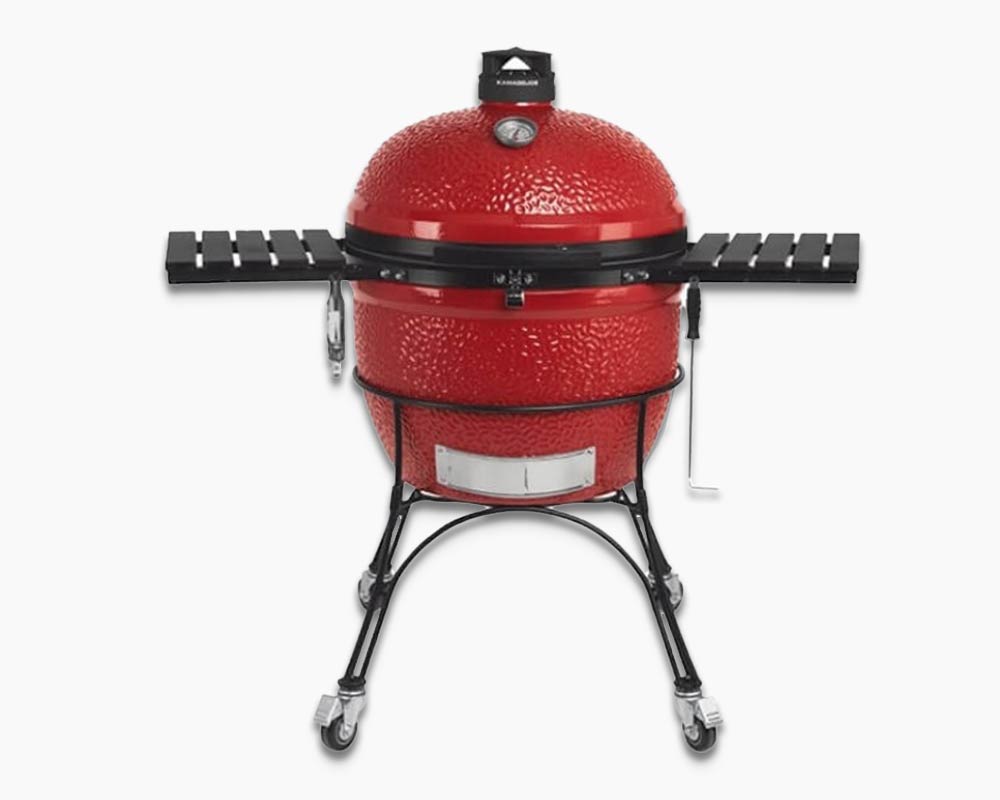 Innovative features such as a wire mesh fibreglass gasket provide an air-tight seal when the lid is shut, ensuring that the maximum temperature is delivered to your food. A Divide & Conquer cooking system employs the use of split-level grates, so you can cook different foods at different speeds. Airflow can be fine-tuned thanks to a top-mounted vent and you can clearly see the temperature inside by way of a gauge on the lid.
Shop Now 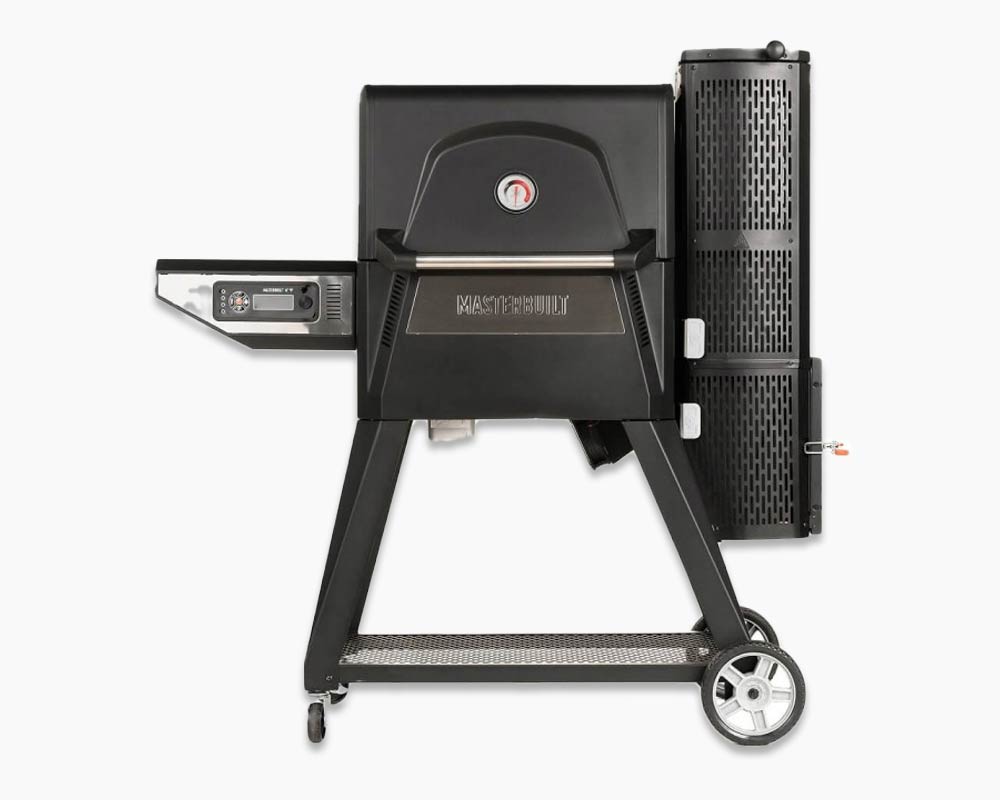 If the smokiest of flavours is of the utmost importance to you then this Masterbuilt charcoal BBQ is the only one to get.

Not only can you grill food in a conventional fashion (and to a precise temperature thanks to a digital control panel that regulates a DigitalFan) but a charcoal hopper can hold enough charcoal to slowly smoke your meat for 12-15 hours.
Shop Now 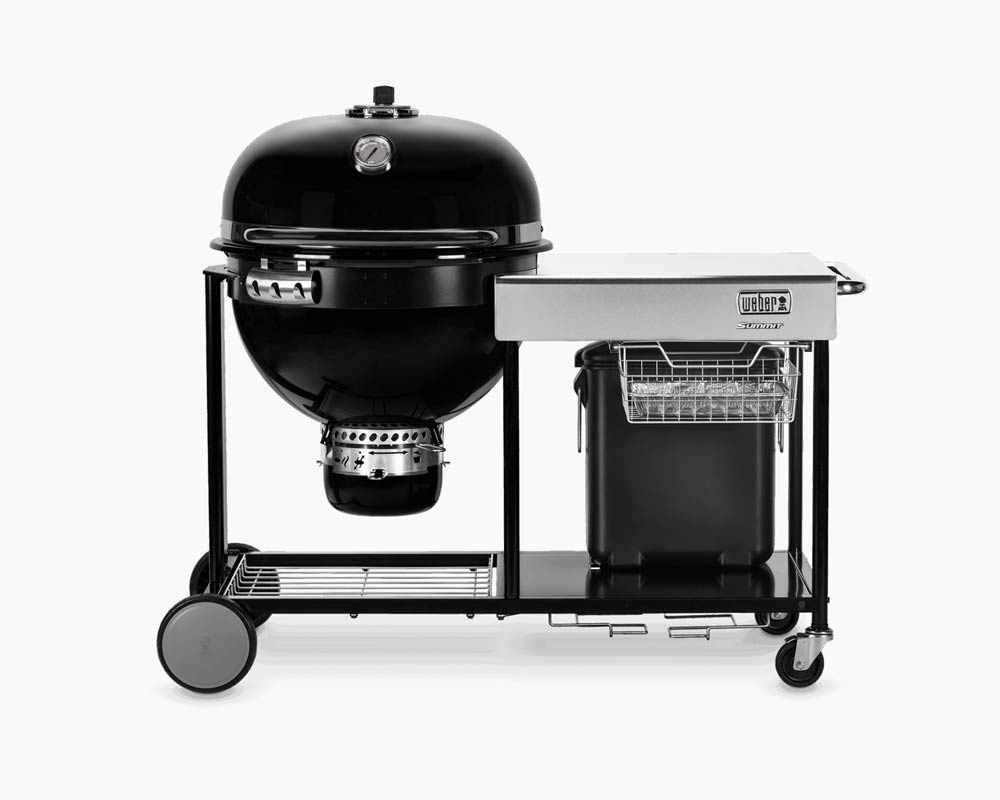 No list of charcoal BBQs would be complete without the brand that kickstarted a revolution, and this Weber serves up perhaps the ultimate in charcoal BBQ-ing.

Not only does this BBQ look like it will grill your steaks just by looking at them, but a double walled kettle made from Weber's own porcelain enamelled steel ensures temperatures can reach – and stay at – their highest. It also means you can utilise a range of cooking methods: roast, bake or smoke.

It also benefits from Weber's Gourmet charcoal BBQ System which lets you switch out the inner plates to assist with cooking a multitude of foods, such as pizza stone and wok inserts.
Shop Now