The end of an era?

Here’s a fact: the number of billionaires in the world has doubled in the last 10 years. That means more big wig press conferences, more opulent holidays, ever more enticing luxury cruises, and some darn high expectations when it comes to air travel.

Not surprisingly, the airlines of the world have catered to this growing demographic, raking in upwards of $17,000 per First Class ticket.

As the “rideshare” concept has been introduced to private jets (where members buy “all you can fly” memberships for $3,000 a month), and as the quality of business class seats has soared, passengers who value comfort are going with Business.

As Simple Flying, an airline reviewer, puts it: “Essentially, business class has become so good that there is rarely much of a point of difference to First (apart from the chunk of change).”

Meanwhile, those that still hanker after ‘true luxury’ have started buying private jets—or fighting for the shrinking number of First Class tickets on offer.

According to the OAG (the world’s largest network of air travel data), over the last 10 years, the number of first-class sales has—Emirates notwithstanding—fallen across the board. 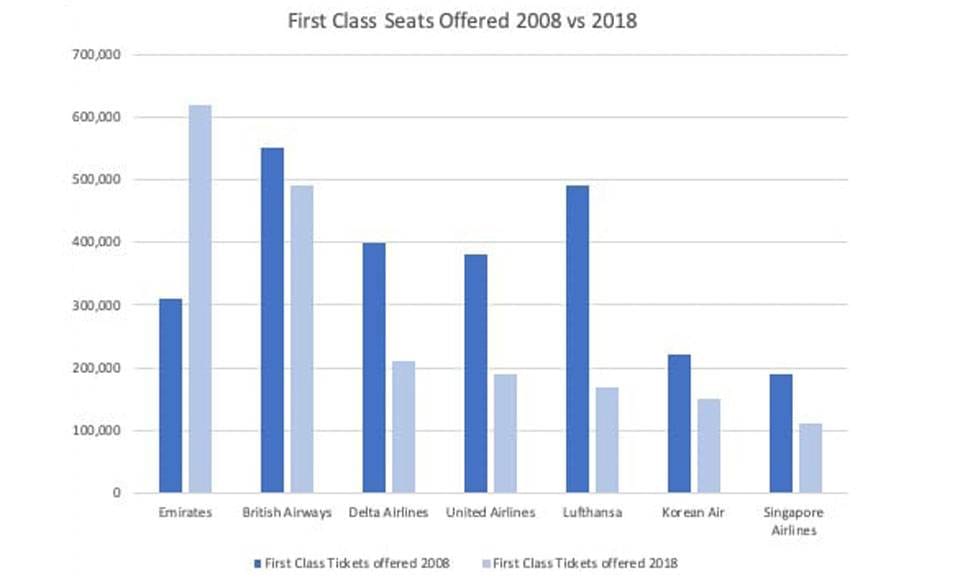 As you can see, everyone from Delta Airlines to Korean Air have reduced their First Class capacity, with United Airlines and Lufthansa making the most drastic cuts. And while British Airway’s reduction was relatively minor, it’s symbolic significance is major, as it was one of the first airlines to introduce First Class, all the way back in 1995.

So why has this happened? Well, back when First Class was invented, just flying itself was seen as the ultimate luxury—those who didn’t have cash to burn went by car, train or boat.

But then Economy was created to make it accessible to the masses, as well as Business, as Simple Flying puts it, “For the mid-level executive who needed to fly refreshed, but who was not the CEO.”

Ever since Airlines have tried to differentiate first class with features like showers and bars (see Etihad’s “The Residence”—First Class by another name), but this has failed (stats don’t lie) to truly make First class worth the hefty price tag. Unless you’re interested in status, or you have more money than you know what to do with, First Class isn’t worth it.

And as The Economist’s Adrian Wooldridge points out: First Class can be costly for a whole ‘nother reason: “Rather than relaxing over my meal and a film, I had to constantly fend off my valet’s unwanted attentions. But since he was such a charming fellow, I didn’t have the nerve to tell him to leave me alone.”

“As we landed I entertained myself by studying the elaborate handset on my seat. It was only then that I noticed that the button marked “immediate service required” had been left in the ‘on’ position.”

Nothing compares to The Residence, still the world’s most sophisticated flying experience. With three dedicated rooms, including a private bathroom and separate bedroom, The Residence is truly beyond First Class! #EtihadResidence

As customers have realised this, Airlines have had to adapt, focussing more on their Business class offerings. For those that fly business, this is great news; both classes have had lie-flat seats for a long time, but if this trend continues then business class suites with privacy doors (like Qatar’s QSuite) are likely to become the norm.