Kanye West, the self-proclaimed greatest rockstar on the planet, and the man God himself is using to show off his talents, clearly doesn’t know as much as we thought he did about fashion & style.

Not one to shy away from rocking controversial footwear choices, the Stronger rapper attended and starred in his own opera, titled Mary on December the 8th in Miami, as part of the Art Basel private art collector’s fair, wearing socks with slides. The footwear choice, which makes us want to go and pay Hades a visit in the Underworld immediately, was part of Kanye’s all-silver ensemble. 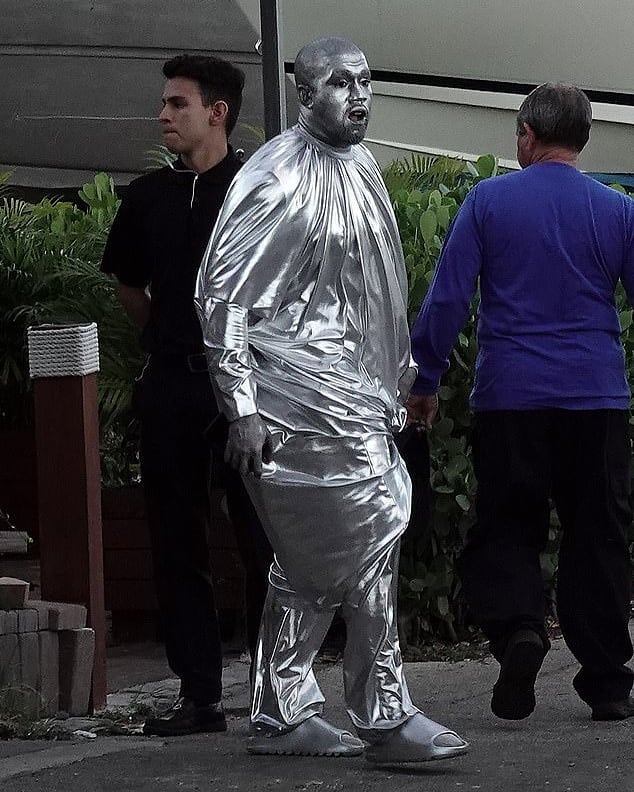 Yeezus’ slides are part of his own Yeezy collection in collaboration with Adidas, and have either been spray-painted silver just for this occasion, or he has his own custom pair. The slides launched on Friday the 6th December in ‘Desert Sand’, ‘Bone’ and ‘Resin’ colour options. No silver in sight. They’re available now for US$55.

Kanye teamed his socks & slides combination with an ever-so-shiny silver outfit, including a fully painted head. He wouldn’t look too out of place on the Yellow Brick Road with Dorothy.

It’s not the first time God’s poster boy has worn a blasphemous footwear combo such as this, as he’s previously paired sandals with a suit, and worn some of the worst-looking Croc-wannabes we’ve ever laid eyes on. But when you’re one of the most famous men on the planet, you probably don’t care what people think of your shoes.

The Mary opera saw West and several co-stars perform many of his previous songs, as well as new ones from his latest gospel-inspired album Jesus Is King. The cast also reenacted passages from books Matthew and Luke, and Kanye even recited gospel passages for the crowd.

Mr. West has some repenting to do.