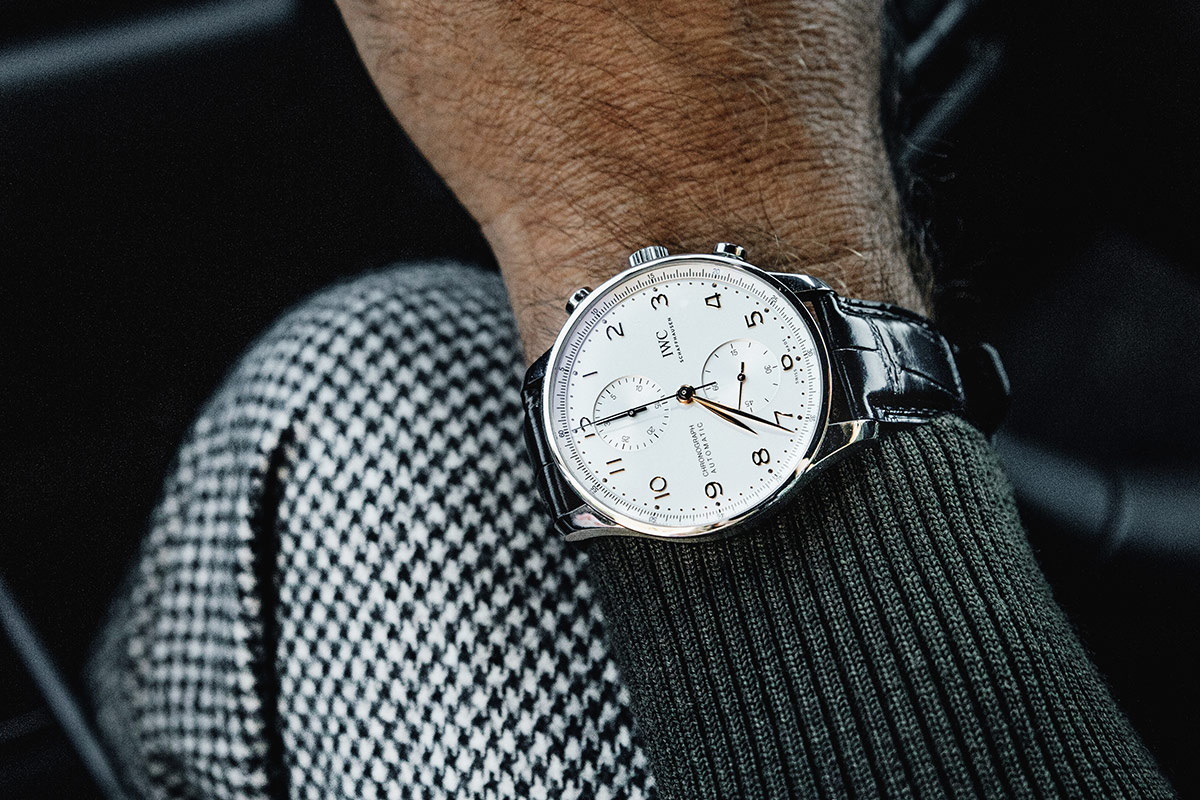 The IWC Portugieser first came to be in 1939 when it was given the reference number 325. The Swiss watch company developed it at the request of two Portuguese businessmen – Rodrigues and Teixeira – who wanted a large yet precise wristwatch, and one that met nautical standards. At that time, the only movement capable of powering such a timepiece came from IWC’s pocket watches, which resulted in a large-for-the-time watch with a 43mm case.

After what could be considered a not-so-successful sales period all the way through to 1993, IWC relaunched the Portugieser as part of its 125th anniversary, albeit in limited numbers. The Portugieser as we now know it today arrived in 1995 – at least, in terms of general aesthetic – but it wasn’t until the introduction of this very latest iteration, Ref. 3716, at the beginning of 2020, that IWC switched to using in-house movements, in this case, the calibre 69355.

The change to in-house makes this latest Portugieser Chronograph perhaps the most appealing iteration ever, as it combines the tried and tested aesthetic that has remained largely unchanged ever since the Chronograph edition came onto the scene, with a much more desirable calibre under the hood.

We spent a few days with the Portugieser Chronograph Ref. 3716 on our wrist to see how it wore and to ultimately find out if we’d choose to have one in our collection.

You’ll immediately notice that this latest evolution of the Chronograph is very easy on the eye – and for fans of the outgoing Ref. 3714, you will surely notice it is virtually identical. IWC presents it in a range of colours (green and burgundy dials are recent additions) but on review here is the Ref. 371604 with a steel case and rose gold markers.

The polished surface of the steel case coupled with rose gold markers and the black alligator leather strap immediately edges this watch towards being suited for more formal occasions. But it’s a chronograph first and foremost, which obviously lends itself to the sportier side of horology. We feel that due to the lack of bezel, this Portugieser Chronograph could comfortably be used in either scenario, making it versatile and great value for money: two watches for the price of one. 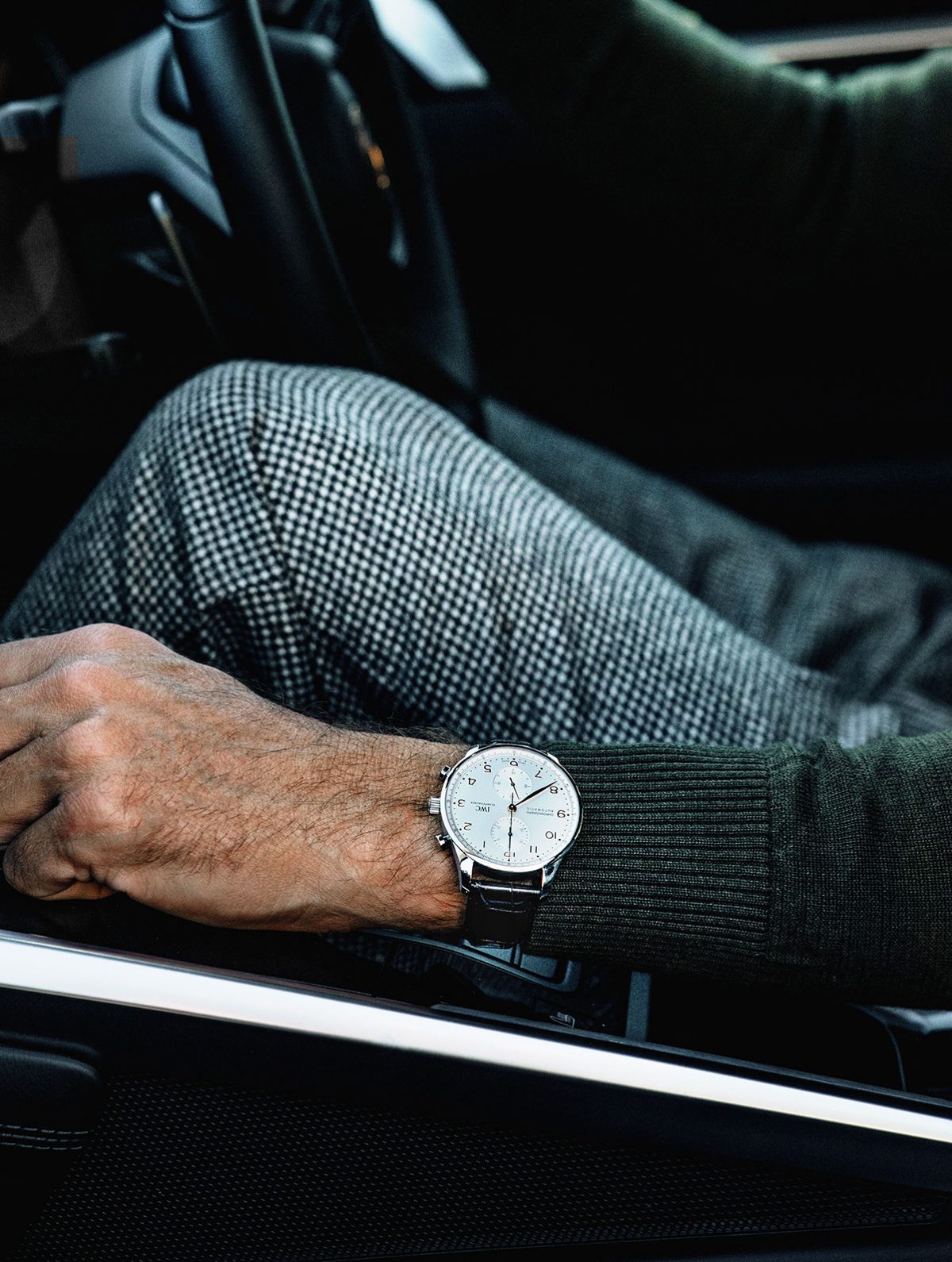 You may not be able to make the same case for the steel case with blue markers variant, as the colouring gives off a more playful vibe, but if you go for gold you’ll reap the rewards.

So, a closer look at the dial and case. Place it next to the preceding Ref. 3714 and you’ll engage yourself in one of the hardest games of spot the difference to ever exist. But that’s because IWC has made practically no changes. You get the same Feuille (leaf) hands, in the case of our model the seconds and minute chronograph hands are blue and the two sub-dials can be found at 12 and 6 o’clock.

We wouldn’t have been too bothered had IWC decided to omit the 12 and 6-hour Arabic numeral markers entirely, instead of just covering them up with the sub-dials. We’re also fans of a date window, but we also understand IWC’s reasoning for not including it here and having one would have messed up the symmetrical nature of the dial. There’s no lume applied to the hands or markers either, so legibility can suffer a little when the sun goes down.

The only minor differences include the font used for the IWC Schaffhausen logo being made ever so slightly smaller and modernised a tad, and the case itself has grown 0.1mm to round out at 41mm. The caseback is also now 0.3mm thicker. If you’ve worn the 3714 you’ll barely notice a difference when you strap on the 3716. 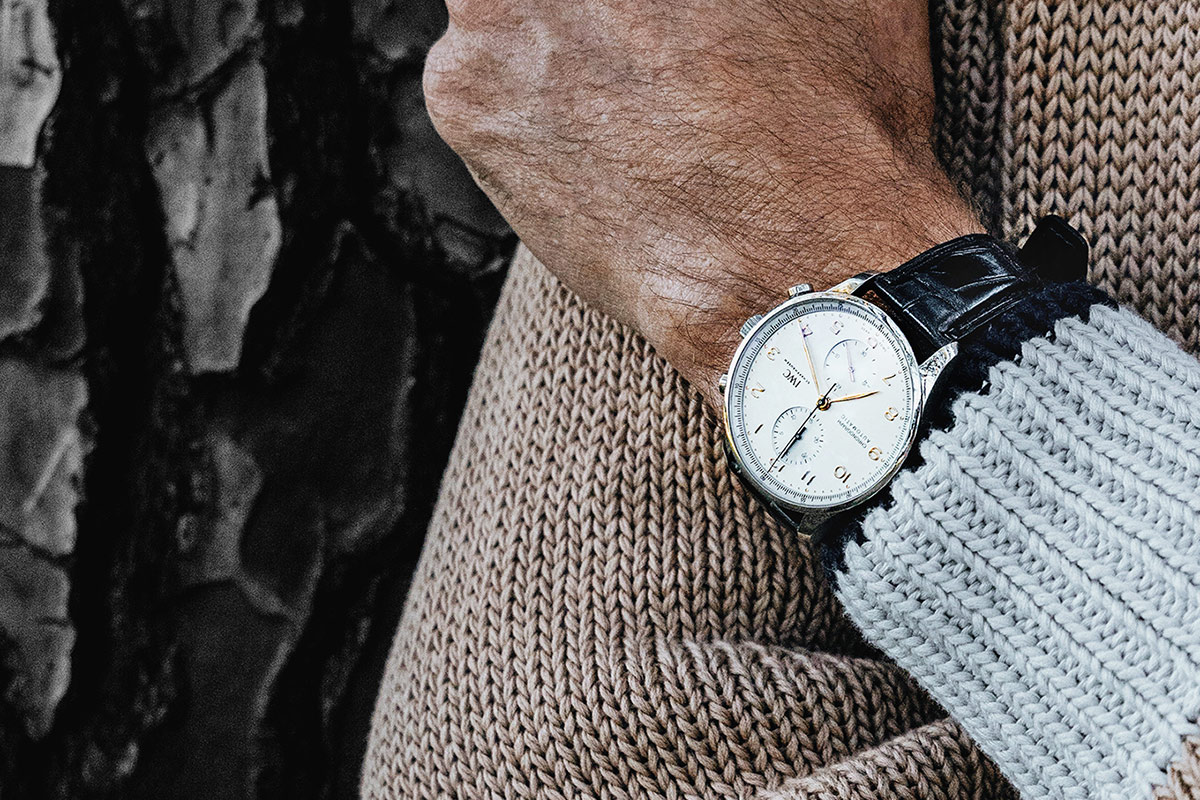 The buckle on the strap has undergone a minor change of its own, with IWC now opting for a triple folding version. The good news is that it’s thinner than the outgoing model and it allows for the buckle to always be centred no matter how tight you need to make the strap. Those with smaller wrists will benefit most from this change.

In our brief time with the watch, we found it to wear incredibly well. It’s remarkably lightweight which when married to the comfortable strap (once on at least, we did have a bit of difficulty getting the open mechanism over our hand) resulted in us sometimes forgetting we were even wearing it. Consequently, however, its lightweight build can make it feel a little less substantial than its AU$11,500 asking price would infer.

The 41mm case is the sweet spot of sizes for this model too, especially as most of the real estate is devoted to the dial (thanks to that minimal bezel). We’d catch glimpses of it in the mirror and smile in response. But again, rose gold and alligator leather did make us think we wouldn’t make it a daily wearer. A change of strap could resolve that issue, though.

You’ll hear no complaints from us with regards to the lack of changes though, as IWC has clearly stuck to an “if it ain’t broke, don’t fix it” attitude. And it works. The older model looked great and is partly the reason the Portugieser family of watches has become so popular among collectors. We expect the same to continue here, especially with upgraded internals. 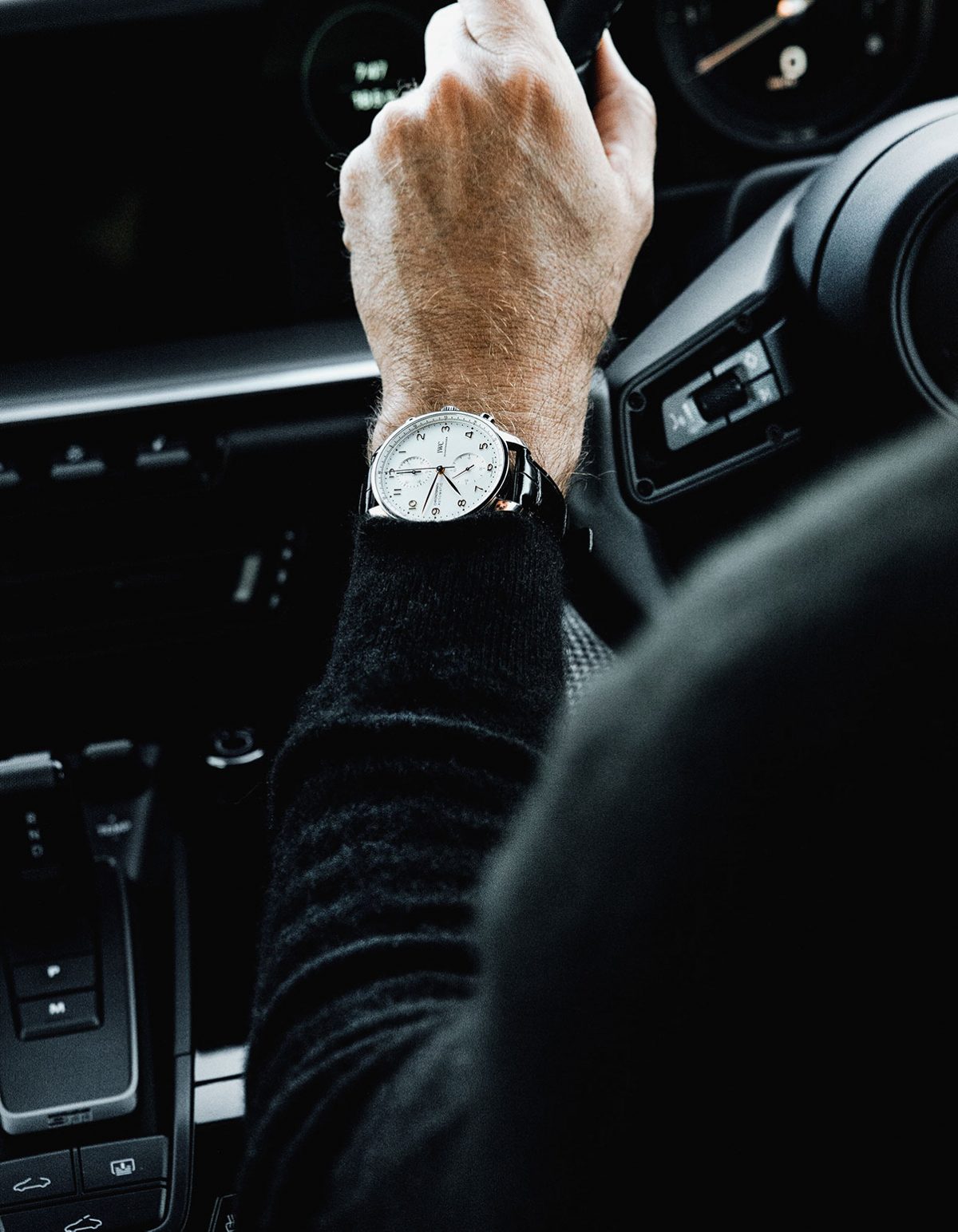 That leads us on nicely to the movement. IWC previously used the Valjoux 7750 (it was later renamed ETA 7750) in the Portugieser and a modified version at that. By that, we mean IWC changed it to display a 30-minute counter instead of 12-hour and removed the date mechanism completely. It was a solid movement and didn’t by any means make the Ref. 3714 a bad watch.

But now IWC is able to say it looks after all aspects of the manufacturing process, the full package becomes more appealing. The same sub-dials remain, along with the lack of date window – in fact, the 69355 shares much of its architecture with the 7750 – so the change to in-house manufacture wasn’t to give the Portugieser Chronograph new abilities or complications (although it now has 46-hours of reserve power compared to 44) – but more to cement the IWC name as a reputable Swiss brand. And you can now view that reputability in all its glory through the sapphire caseback.

So, what comes from our time with the Portugieser Chronograph? If you’re already a cult follower of this family of IWC timepieces then you’re going to love this latest generation even more. It’s a fantastic-looking watch, is supremely comfortable when on the wrist and it functions just as you’d expect a chronograph should. 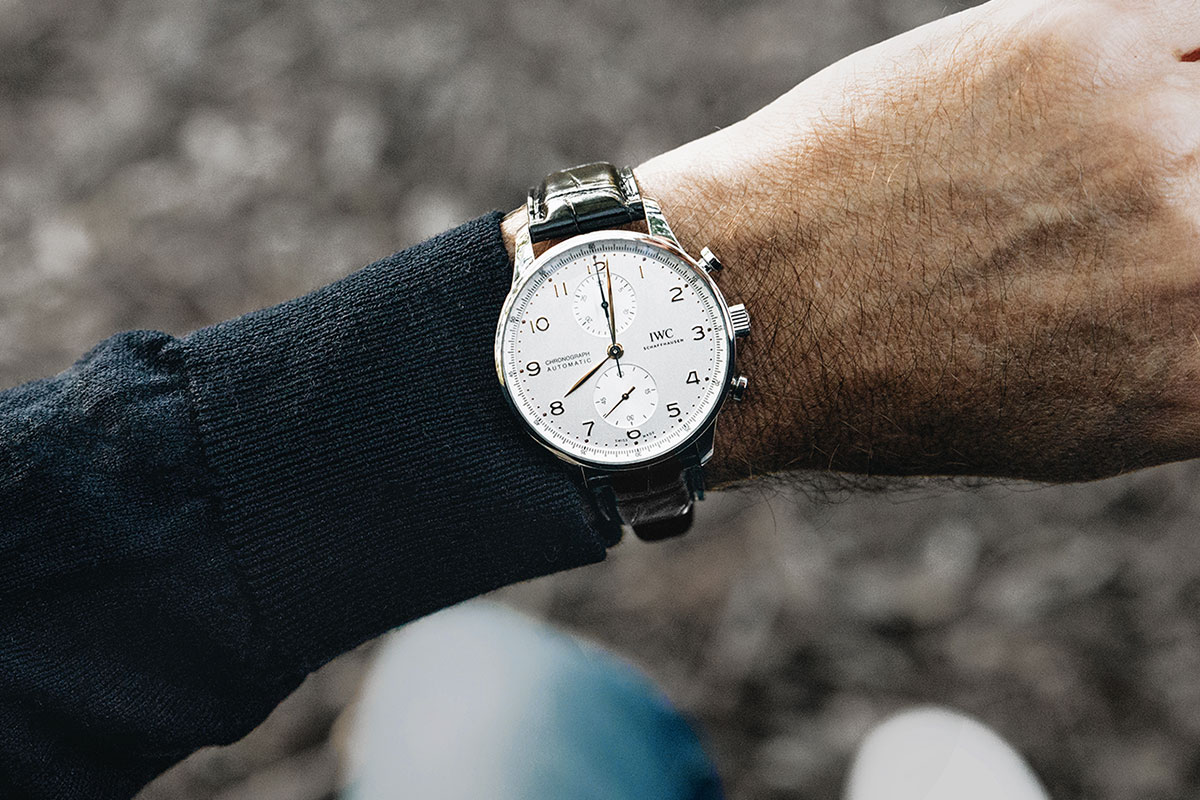 If however you look at it and think “that doesn’t look like an $11,000 watch” then you may turn your attention to something like the TAG Heuer Carrera Calibre 16, itself based on the ETA 7750, and a watch that has a similar aesthetic. Although adds the 12-hour counter back into the mix, along with a day/date window.

Discover the IWC Portuguieser Chronograph A$11,500